Hey there. Nosferatu200 here. I figured that ARC might as well do a bit of election coverage ourselves since it has been a topic that has come up frequently on the blog of late. I'm sure that the fellow ARC members BloodRayne and the folks with Yellow Vests Canada Exposed will chime in as well, but here is my personal prognostication:

Keep in mind though that I really suck at this sort of thing, though admitting this at least makes me more honest than the professional prognosticators who also suck but pretend they know what they are talking about and get paid a lot more than me for their opinions.

Of course, ARC readers aren't necessarily here for our views on the mainstream parties.

Over the evening I plan, barring food poisoning, a computer crash, or general boredom, to focus on the fringe candidates. The three members of the Canadian Nationalist Party and Stephen Garvey's National Citizens Alliance, both right-wing extremist (the latter being overtly National Socialist) parties are on out radar as are some of the more colorful members of the PPC. We may also look at Conservatives such as Kerry Diotte who has been friendly with Faith Goldy and Michael Cooper who read the Christchurch manifesto screed into the parliamentary record. While I don't expect anyone from the CNP or NCA to win enough votes to reach even 1% in any riding, nor do I expect any PPC member to be elected (save the possibility of Bernier himself) it will be interesting to see the number of votes they do manage to pull in.

We'll start here when something interesting pops up. But here are some interesting links to start us off:


CBC News has been able to trace some of the calls to groups that are part of the Canada Strong and Proud network, a third-party group that opposes carbon taxes.

This seems to be a rather big deal.

Here are a few ARC articles from the past few months: 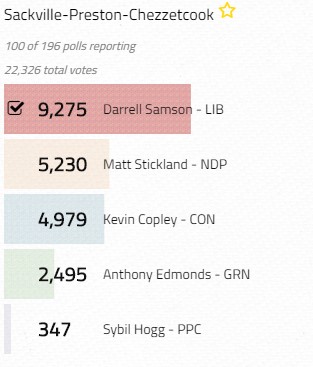 Wow. What a loss.

Hogg made waves for her bigoted and hateful remarks, resulting in some substantial media coverage rather late in the campaign. Bernier announced he was standing by her, no matter what, further cementing the fact that the worst people in Canada have found a home in the PPC.

Sybil Hogg, racist islamophobe, who is a big fan of white nationalists, Geert Wilders and Faith Goldy, is running for the #FarRight #PPC in Preston-Chezzetcook-Sackville.#cdnpoli #nspoli pic.twitter.com/fZp3ssvHcz
— 🏴 Halifax Against Hate 🚩 (@HFXAgainstHate) August 25, 2019

This is shocking. Even for the PPC.

Souris-Moose Mountain was just called. While more votes are to come in I'd be surprised if Travis Patron managed to reach 100 votes total: 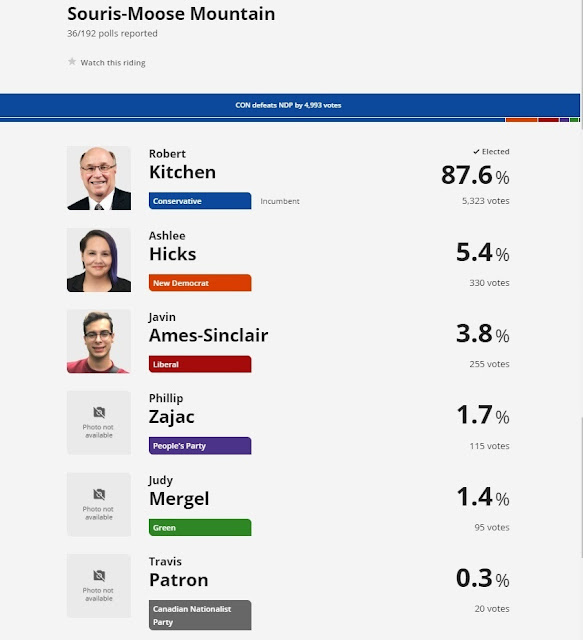 Maxime Bernier couldn't even secure his own seat. The question now is whether the PPC will fold or not. 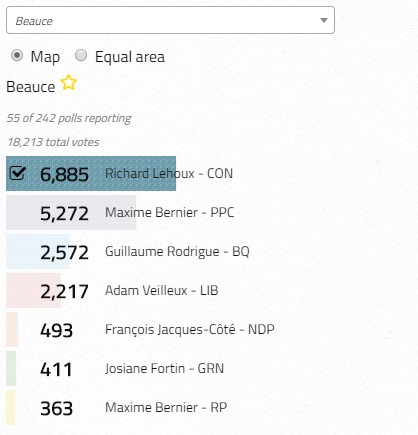 PPC candidate Mark Friesen lost his riding. He's back to hocking his islamophobia as a private citizen. 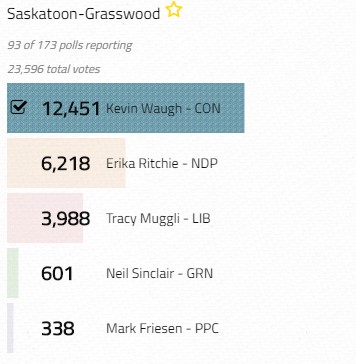 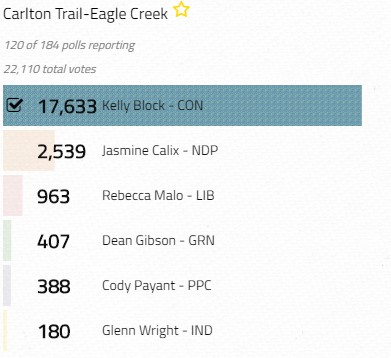 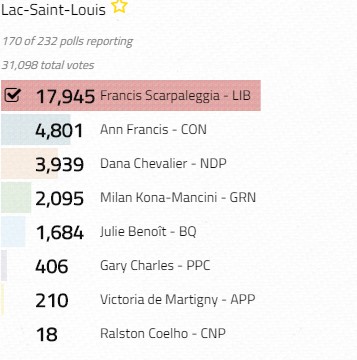 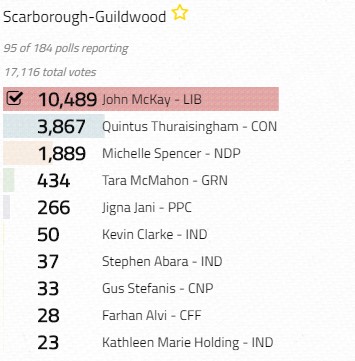 In a a real twist, Julien Côté secured more than 1 vote. Running as an independent, Côté is a former spokesperson for ID Canada. He also hired Shawn Beauvais-MacDonald (Atalante/Unite the Right) as security. 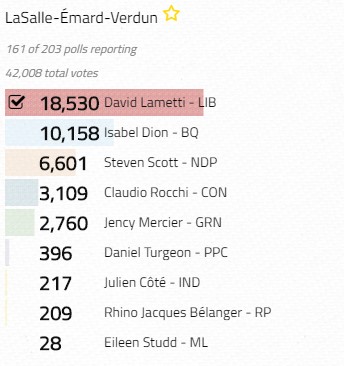 @MontrealAntifa has now discovered that Côté hired none other than Shawn Beauvais-MacDonald (Atalante; Unite the Right - where he gave a shield to James Alex Fields) as security. /3 pic.twitter.com/VTvMRxUzvl
— Yellow Vests Canada Hex-posed ☠️ (@VestsCanada) October 20, 2019

In the ridding of Cumberland-Colchster where white nationalist Stephen Garvey was running, the call didn't come in until very late in the evening as the vote was very close and may be subject to a recount.

However, Garvey wasn't even close to competitive: 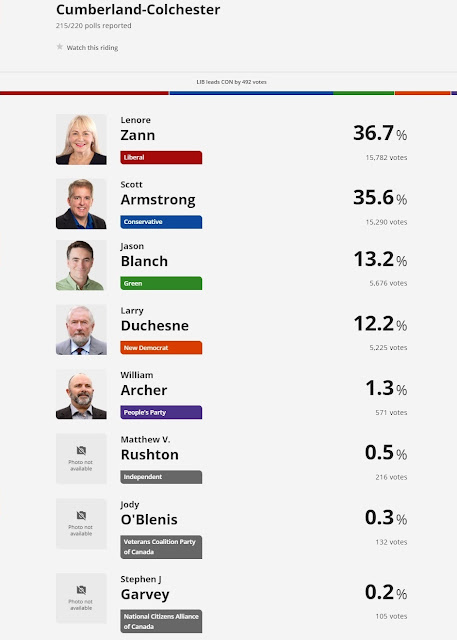 We also have Laura Lynn Thompson, an evangelical anti-LGBTQ candidate who held an event where the Soldiers of Odin acted as "security". She first ran for the PPC in a by-election in BC where she was decidedly defeated. She then opted to run in deep blue Alberta where she might be more competitive.... she wasn't: 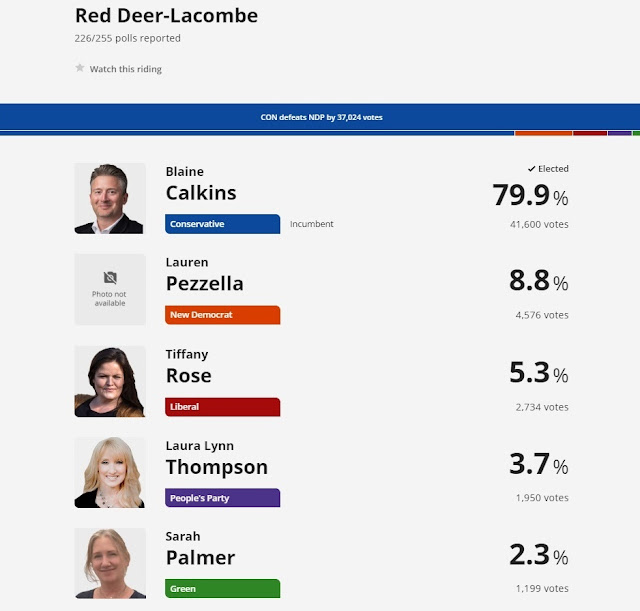 *   *   *   *   *
So, at this point (and it is still subject to change) the final numbers appear to be not too far off my best guess though the Liberals did a bit better and the NDP a bit worse than I had thought:

And as expected the people this blog covers did especially poorly. One might be tempted to suggest that this was a repudiation of far-right populism and to an extent it was, however we can't put the nails in the coffin. Already the groups ARC monitor are posting screeds suggesting the vote was rigged and those in Alberta and to an extent Saskatchewan are demanding that those two provinces separate from Canada because... you know, they are Canadian patriots who love Canada and democracy unless a fair election doesn't go their way in which case screw democracy and screw Canada!


And the death threats continue:

I'm sure that we'll be covering the aftermath of this election for some time. However right now we're all heading to bed.