This week Paul Fromm posted a picture himself and Lily both wearing yellow vests at a rally, and described a situation where Lily pulled a suicidal man off of a bridge. This story is unconfirmed, but you know that whole “pics or it didn’t happen” thing? Yeah, that. 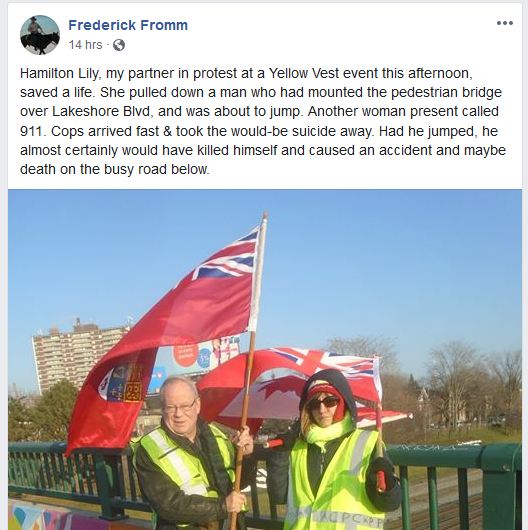 This stuck in the craw of a couple Yellow Vesters who have pretended to distance themselves from the supportive Fromm. Justin Long of the Hamilton Yellow Vests claims that they already denounced both Fromm and Lily, yet they all share such similar views is it really all shocking that both Lily and Fromm would join yellow vest protests? Justin's mom Rebecca Long also weighed in.

Justin Long has repeatedly shared antisemitic content on social media. Not only that but he praised Paul Fromm when he initially joined yellow vest rallies. It's quite clear he's more concerned about the optics of a neo-nazi like Fromm being involved with the yellow vests, and not about his views.

Long also attempted to persuade the Yellow Vesters to sign an anti-hate pledge this weekend, which went about as well as you would expect.

Justin Long tried to persuade his yellow vest brethren to sign an anti-hate pledge and of course that didn't go over with the vesters because #YellowVestsCanadaIsAHateGroup.
Long is probably the most clueless of the yellow vests. pic.twitter.com/4UNBG8B7eU
— YVCE 🧛‍♀️🧛‍♂️ (@VestsCanada) December 22, 2019


In the summer Justin Long gave a speech at the Canadian Combat Coalition rally in Ottawa, which was attended by the Canadian Nationalist Party, and Kevin Goudreau. It's so strange that he constantly has ties to Canadian neo-Nazis. I wonder why that could be.

Fromm also received responses from Sudbury, ON Yellow Vest Jeff Doyle. He's best described as a cartoon character based on an untalented person desperately trying to be famous. He took a lot of shots at Fromm in response to his post. 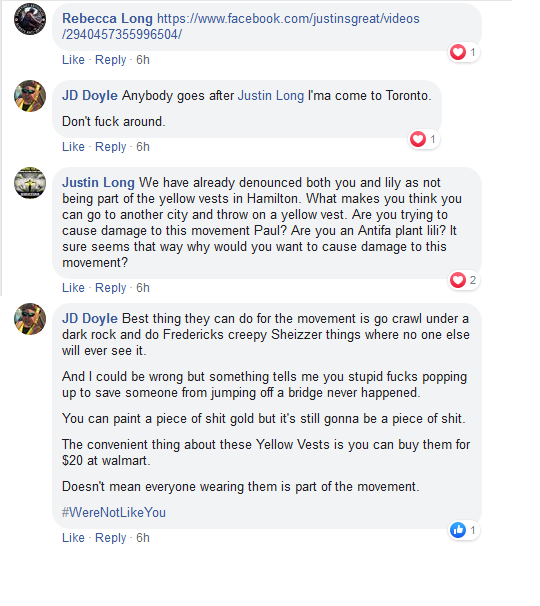 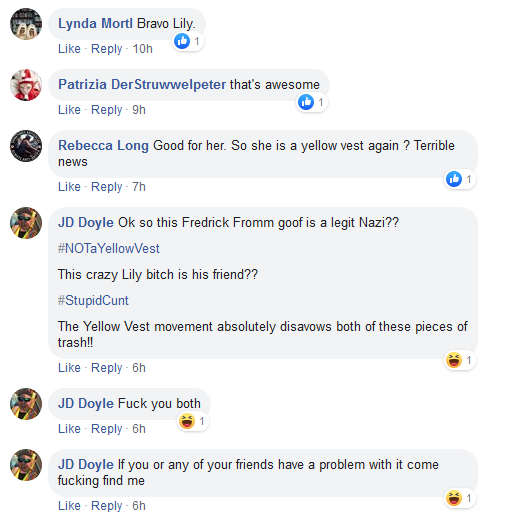 Doyle has repeatedly shared Islamophobic material on social media so he's only deceiving himself if he thinks his views differ so vastly from Fromm's.

Also stating it’s part of the plan for a one world government, and using it as a segue into “hang all politicians I don’t like.” #cdnpoli pic.twitter.com/uo2rDzOWQN
— YVCE 🧛‍♀️🧛‍♂️ (@VestsCanada) April 15, 2019

Lily posted a response video to YouTube, and it is pretty entertaining. Here is a clip, but basically the entire video is her repeating pretty much the same stuff.

Continuing the drama, Martin Brousseau called out Pat King for stolen valour. Pat's response was to use a quote from our work. 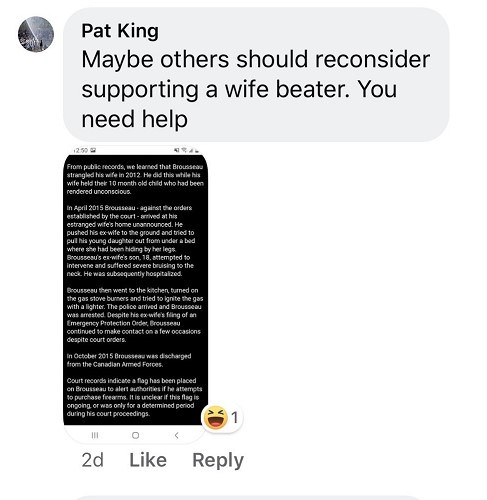 Yep, that's a screenshot of our article. Not so full of shit then, hey Pat?

It’s wild that Pat King will use our work against Brousseau in a spat, but won’t believe us when we publish court records on his bff Smalley/Knyx. https://t.co/u4WrgPhusX pic.twitter.com/8WAjD3SDwz
— YVCE 🧛‍♀️🧛‍♂️ (@VestsCanada) December 20, 2019

It's funny how Pat King will claim we have no credibility, yet he'll cite us when it suits his purpose.

And lastly, Shaun Arnsten, who seems to be a Wexit supporter and "patriot" (and is a major Islamophobe) makes videos on Facebook that are often shared by Yellow Vesters. 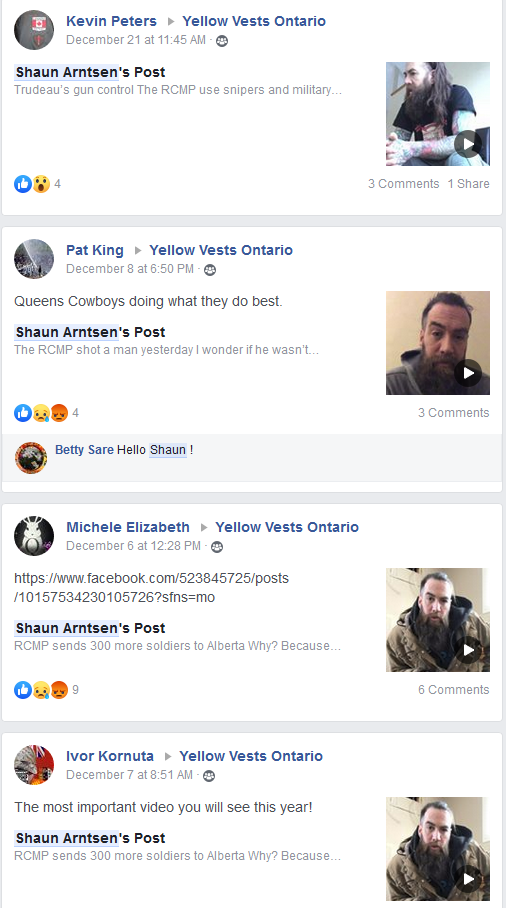 To be quite honest we haven't watched too much of his material. However, he did get into a tiff with Bobby Kyle of the Yellow Vests. 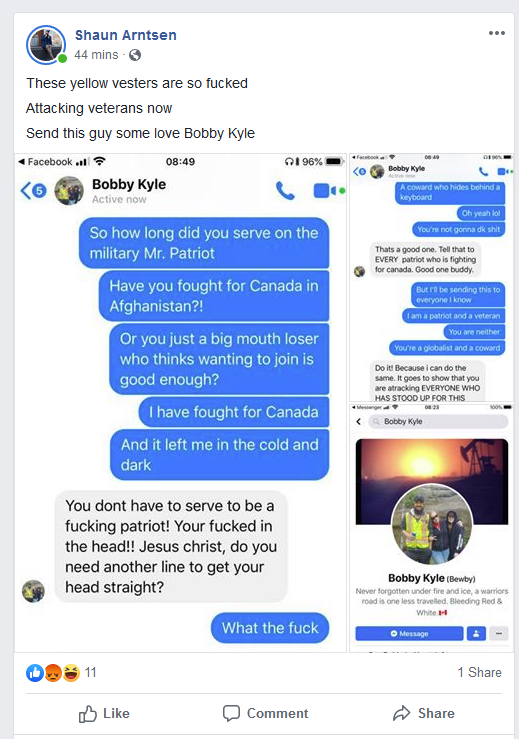 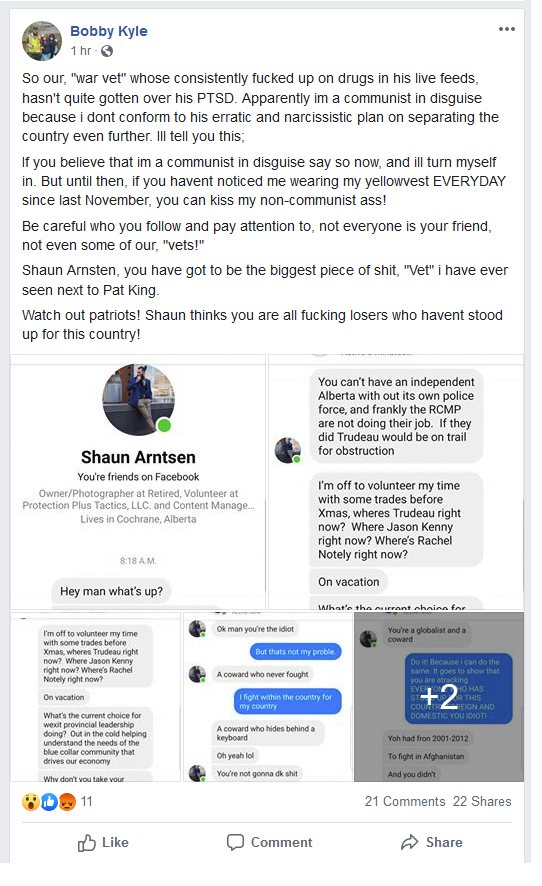 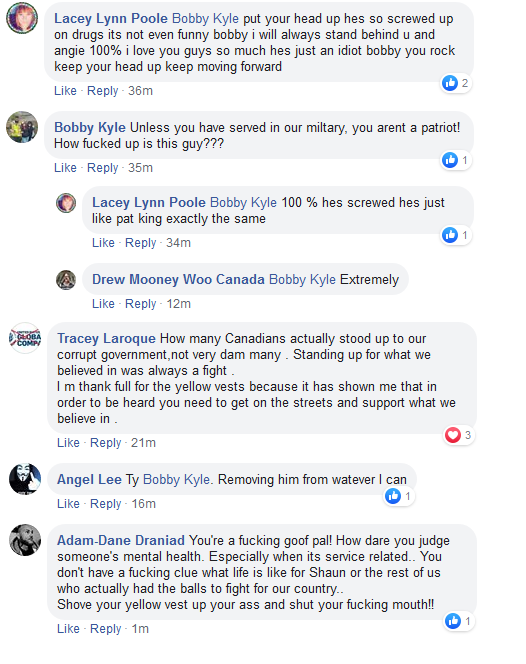 
It's a minor miracle that the Yellow Vesters have been able to organize any rallies at all given how well they get along.