You know, the reactionary Yellow Vesters really are doing a poor job of vetting their supporters.... unless the presence of neo-Nazis is a feature and not a bug (spoiler: it is a feature): 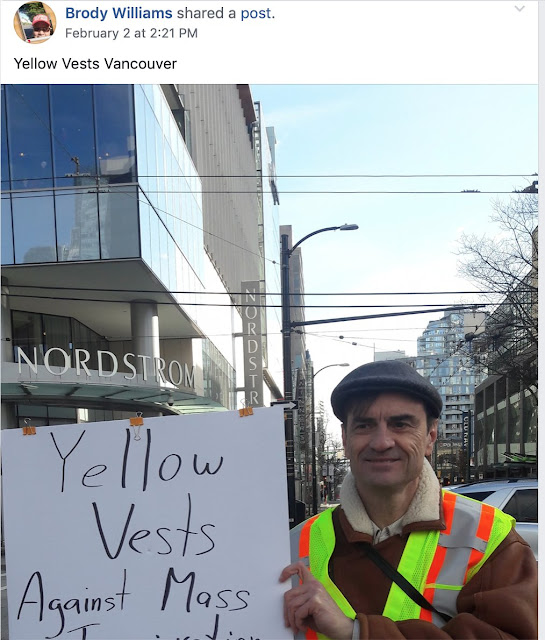 Pictured here is Brian Ruhe, friend and supporter of Paul Fromm, Holocaust denier, antisemite, and a quite literal Hitler worshiper: 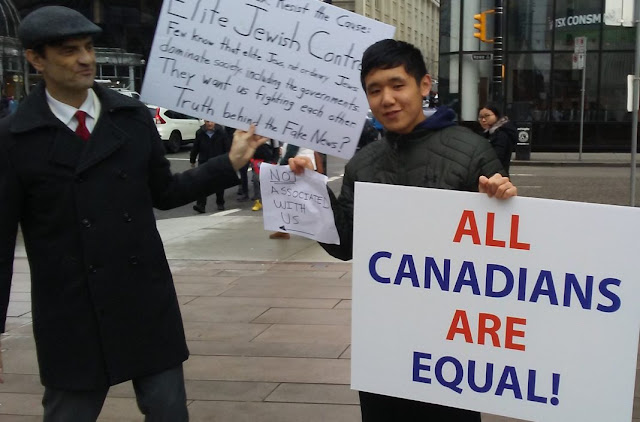 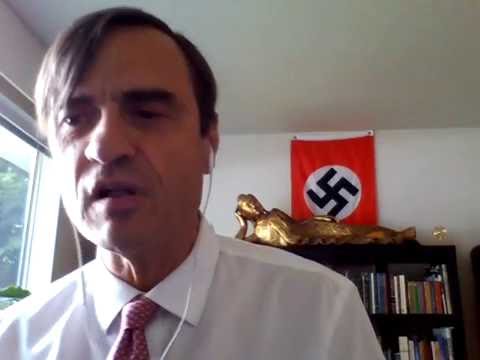 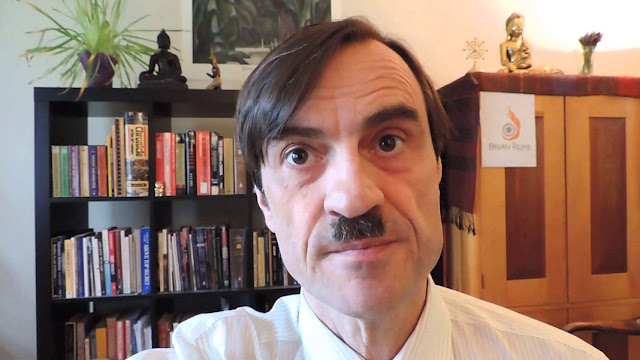 ARC has of course profiled Ruhe a few times on the blog already:


Then again, Ruhe does really fit in to the reactionary Yellow Vester crowd given what ARC and especially Yellow Vests Canada Exposed have dug up. In fact others have decided to document the hatred and vitriol the supporters of this vitriolic movement has promoted, including on their own personal Facebook profiles:

But then the violent Islamophobic rhetoric isn't confined to the reactionary Yellow Vesters. As the sentencing for the 2017 Quebec City mosque murderer is imminent, members and supporters of the Canadian Combat Coalition have some things to say.... all of which are absolutely disgusting: 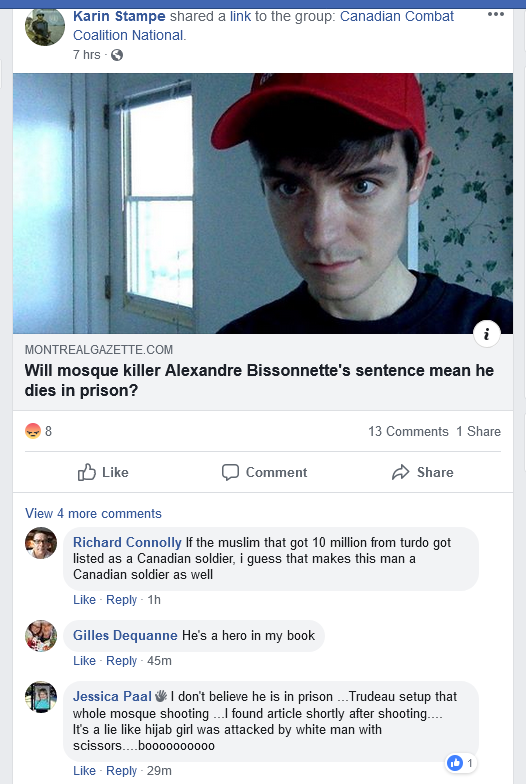 With all this in mind and considering the numerous threats made by reactionary Yellow Vesters, I'm just going to leave this here to do with as you please:

Here is a list of hotels for the #YellowVestsCanada convoy to Ottawa. Please contact the hotels and mention that they are giving group rates to a hate group. @ARCCollective @YYCantiracist

If they question this, please direct them to the information that we have provided. pic.twitter.com/pdjmbiESe6
— Yellow Vests Canada Exposed (@VestsCanada) February 6, 2019

Back in Alberta, a mosque received a threatening note demanding Muslims leave the province:

We are alarmed to find that another mosque in #yeg has been targeted by what appears to be the work of the clann.@jkenney should know that this is what antisemitism looked like ~100 years ago when antisemitic literature had been floating around freely. It didn't end well. https://t.co/QpXwjZNdfW
— Calgary Anti-Racist Action (@YYCantiracist) February 6, 2019

It appears that the note comes from the Clann of which Ryan Dean and Tyson Hunt are members. The note, as well as the subsequent denial by Dean on the Clann Twitter account, seems to be another example of Dean trying to create his own false flag straw man in an effort to blame others: 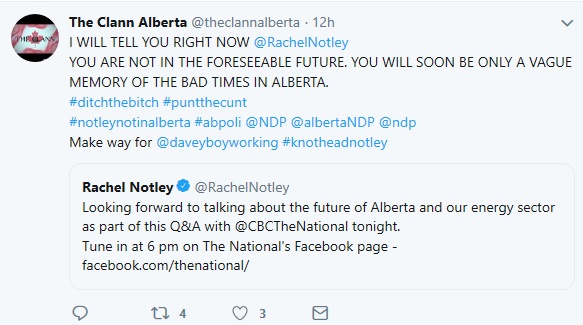 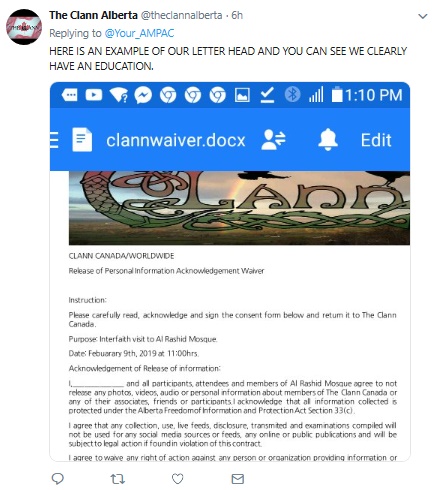 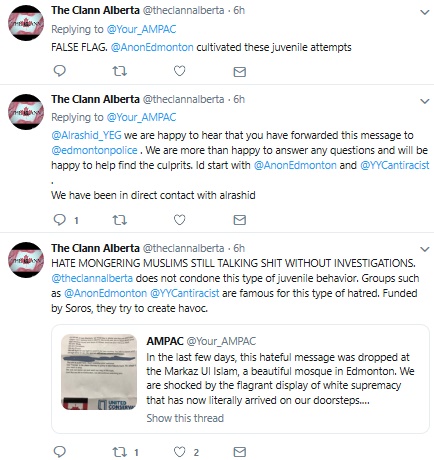 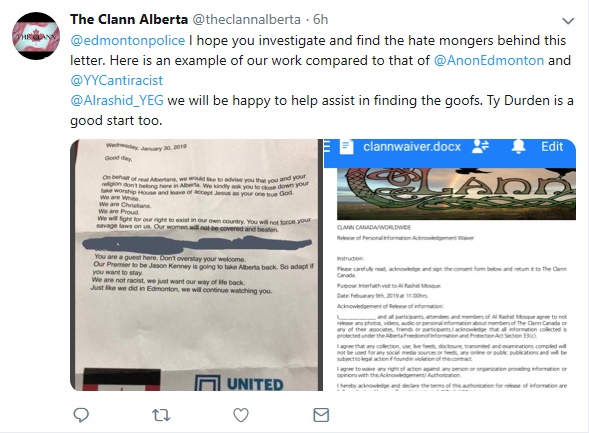 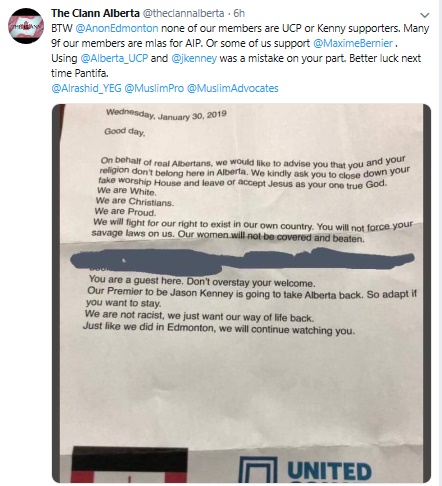 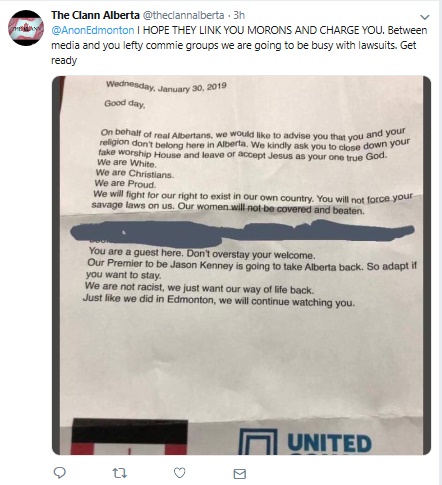 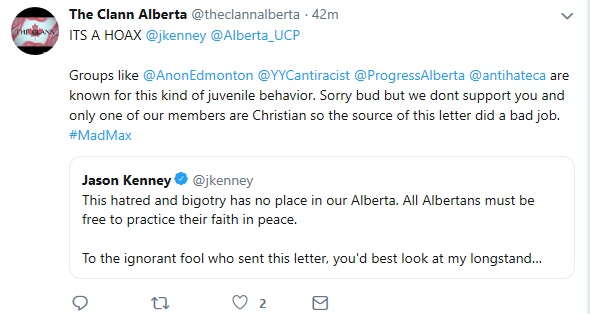 The Clann, in their usual playbook, are now trying to pin the islamophonic letter (with their logo on it) on us and a few others.
Sounds like something the guilty does when they cant admon their guilt. pic.twitter.com/BlJNLbmyKg
— Calgary Anti-Racist Action (@YYCantiracist) February 7, 2019

It is especially telling that Dean is claiming that it couldn't be them because they are meeting with Al Rashid Mosque and they would "never" do anything to sabotage said meeting.... 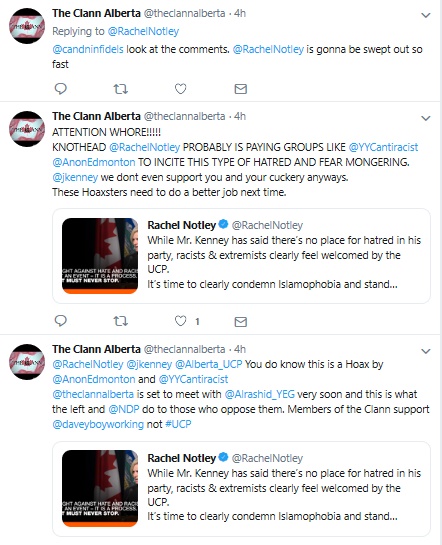 .... despite their clear efforts to sabatoge the meeting prior to the threatening note: 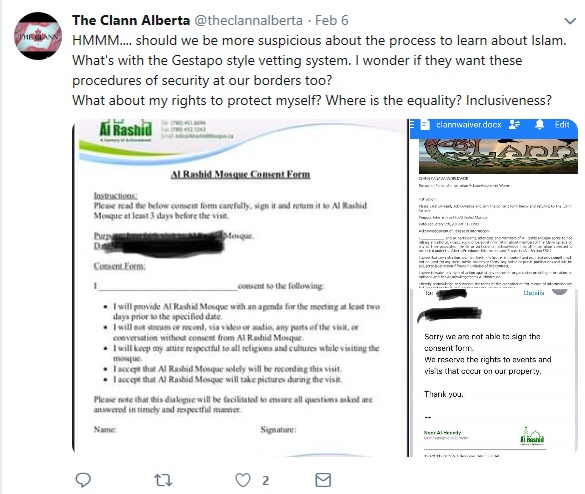 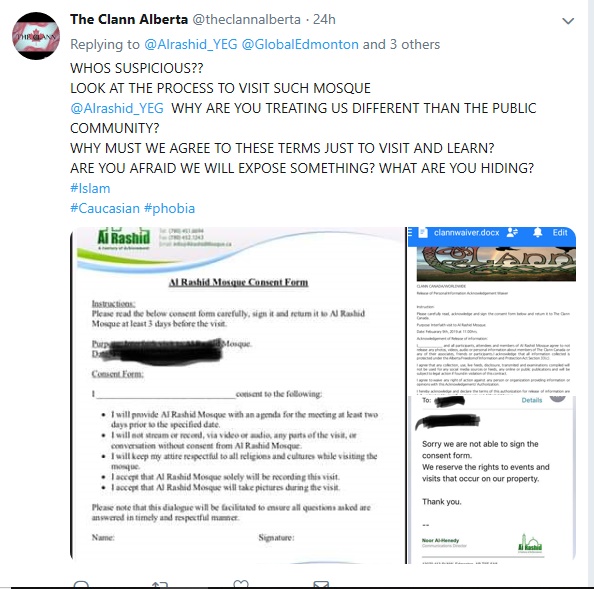 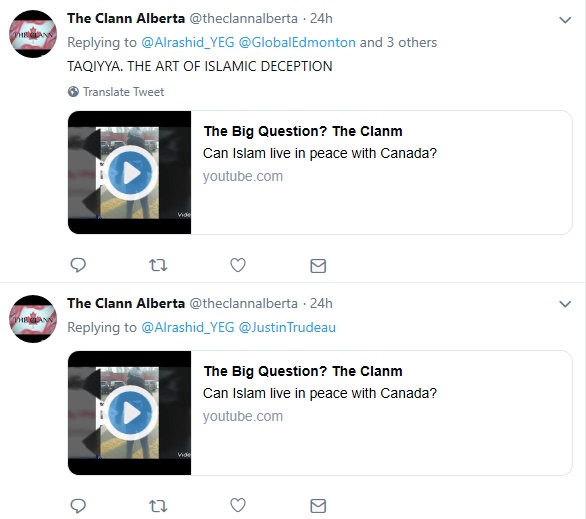 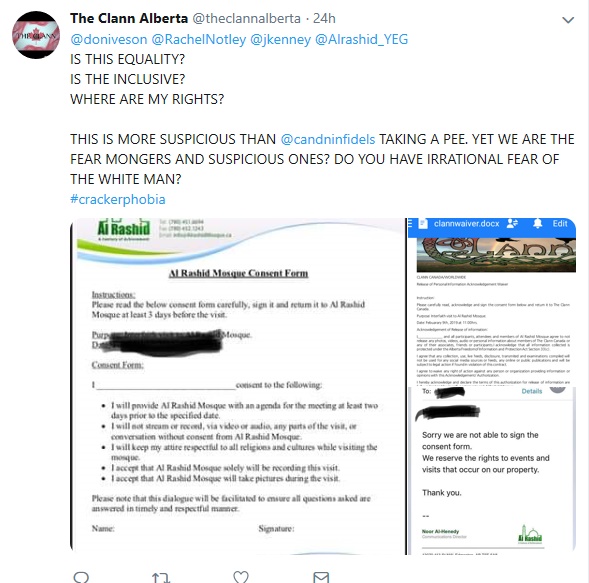 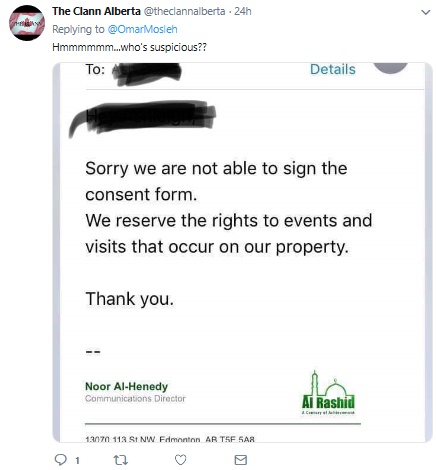 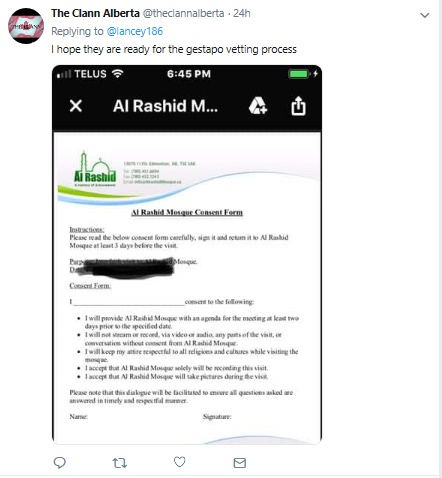 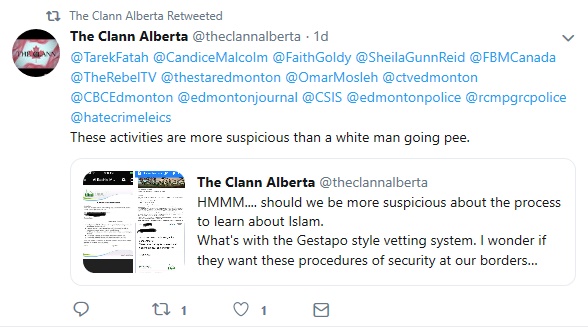 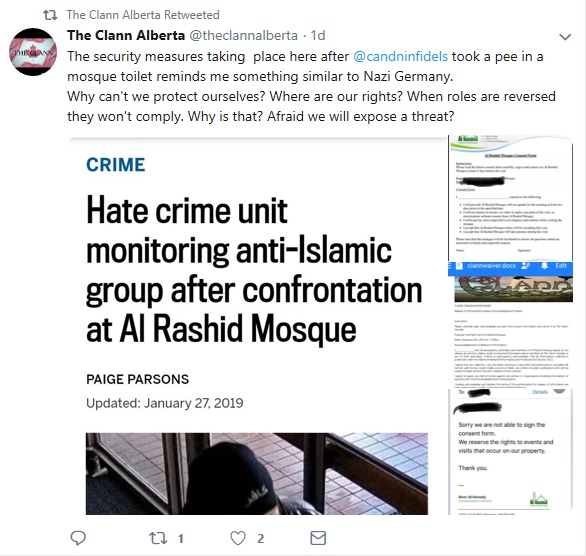 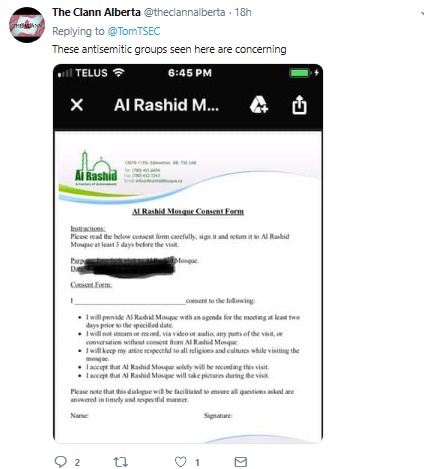 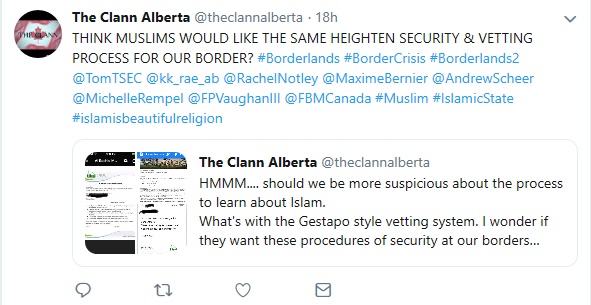 I will say this: those slimeball alt-right "people" are cunning. Putting on yellow vests and pretending to be "of the people" no doubt fools the average uncomprehending citizen and the intellectual giants at the CBC. This to the detriment of the real gilets jaunes in France who are the opposite of the fake Canadian variety. They oppose the neoliberalism and austerity of Macron; fack knows what alt-right racist Canadian yellow vests stand for beyond white supremacy. Nothing whatsoever is my guess ...

When we get the full brainpower of the feds and media unable to grasp (or deliberately forced to show zero institutional memory) that years of US sanctions are what ruined Venezuela, not some demented dictator, which is the official line now breezily advanced for regime change, I have pause to wonder what in hell is going on.

If by allowing our home-grown racist yellow vests to become an obvious problem, then cracking down on them diminishes the legitimacy of real protest in France to typical Canadian eyes, because I have no faith that the typical Canadian is well-enough informed to spot the difference, or even gives a sh*t. That's why I call the Canadian alt-right cunning - they know your average dork cannot be bothered to figure out what's happening and will equate racist Canadian yellow vests to the legitimate protesters in France. We are hoisted on our own petards by our disinterest in current events.

Combined with the official stance of full steam ahead on bitumen oil that is Alberta-wide, where any acknowledgement of climate change is greeted with wonder and scepticism as if it were the ravings of lunatics rather than accomplished science, I seriously wonder about our country. It is rife with inconsistency and the brayings of utter dolts.

Still, I commend your inalterable stance against racism - at least it is easy to spot and to ridicule for its obvious nastiness and divisiveness. That guy with the Hitler mustache needs to be committed to a psycho ward where he can practise trimming it in front of a mirror to his heart's content, and away from others who are only a tiny amount away from being similarly lunatic.