I still plan on posting a report on the events of last week in Ottawa, however I thought I'd first dive back into the reactionary Yellow Vests Canada Facebook page created and administered by Marc "Tyler" Malenfant. Malenfant was one of the early boosters of the Yellow Vest Convoy to Ottawa which rebranded as United We Roll. As the folks at Yellow Vests Canada Exposed have noted, there is a lot of infighting now regarding the distributions of funds by the the man who is the face of the protest movement and Malenfant comes out to defend him in his usual over-the-top manner:

For Malenfant, there always has to be an enemy and a dark, sinister, conspiracy that he discusses using over-the-top hyperbole, nonsensical generalizations, outright lies, and logical fallacies such as creating a strawman. It has become the hallmark of his online presence. I provide a few other recent posts on the Facebook group as illustrative examples: 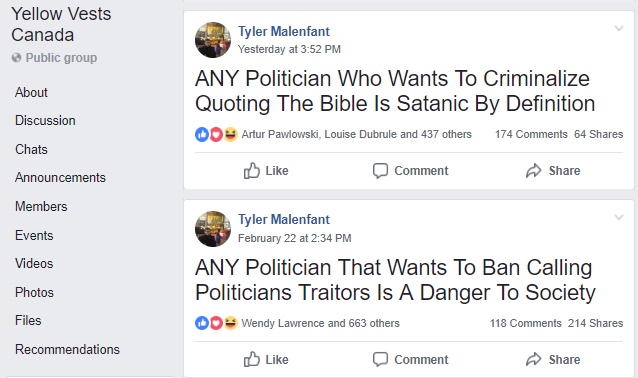 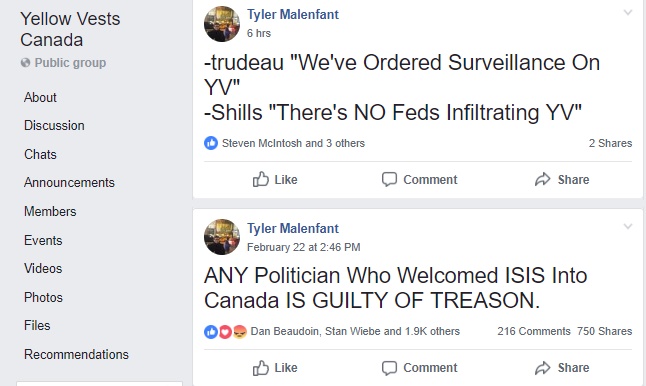 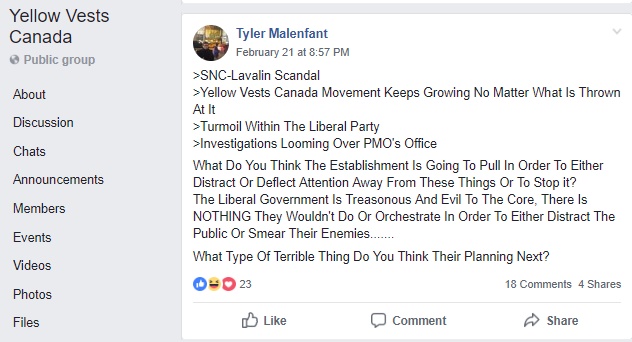 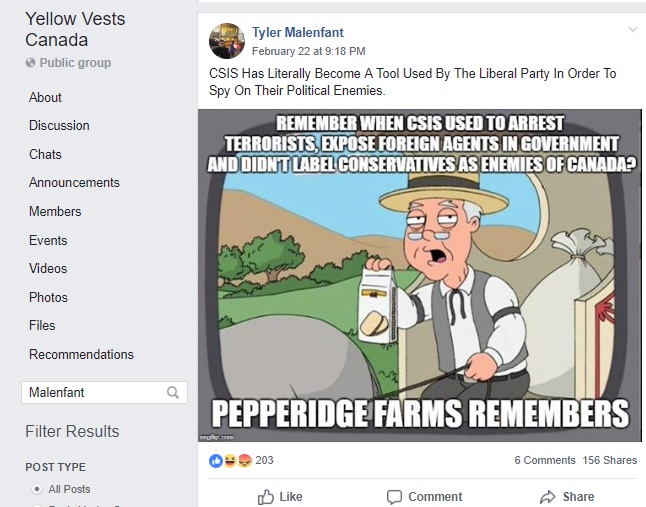 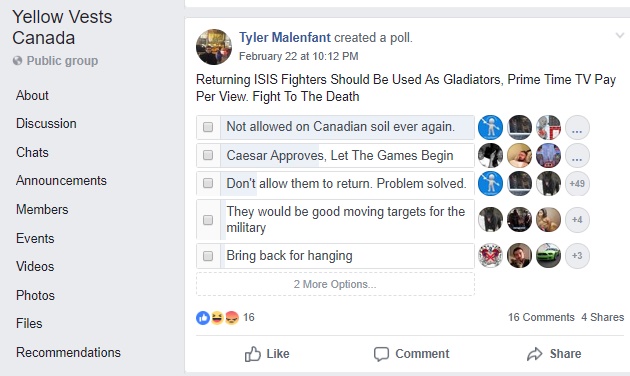 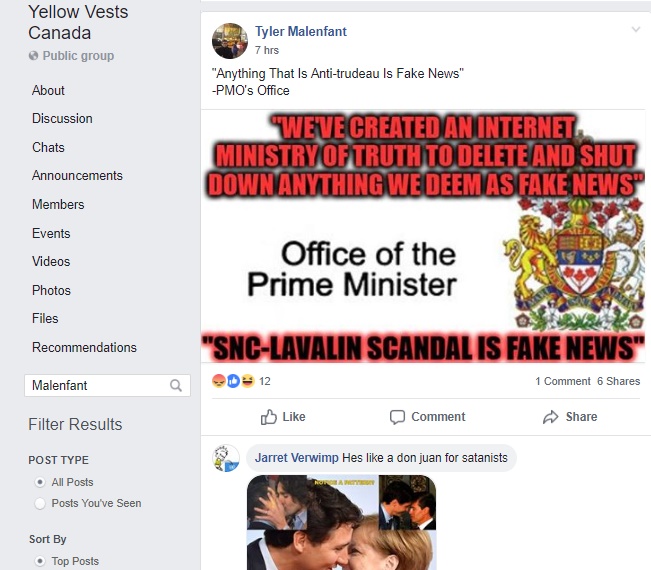 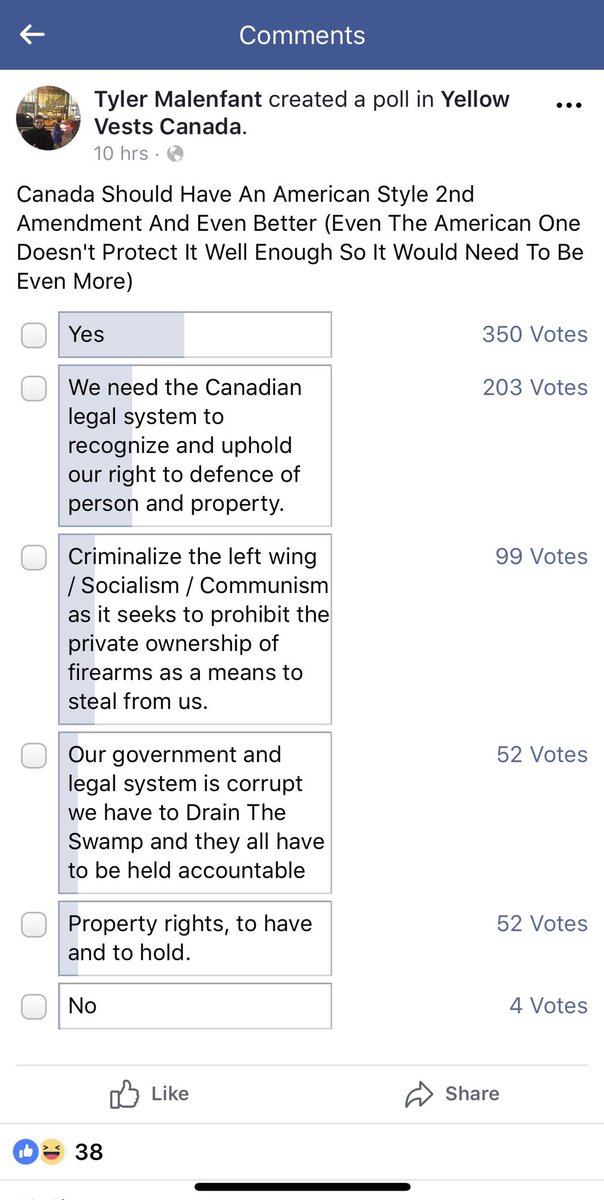 What does any of what he wrote there even mean?

Take for example the "pep talk" he gave to members of the Yellow Vests Canada Facebook group prior to the Ottawa convoy:

His refusal to distance himself from the fringe conspiracy nutbars in the group is understandable since he himself is a fringe conspiracy nutbar. Readers will look at the self-delusional and grandiose claims that, in the future, there will be statues of them built and that their names will remembered for thousands of years as laughable, but I by and large understand the appeal. These are people who are nobodies (hey, I'm a nobody as well so I don't necessarily look at that description as a pejorative) but who have convinced themselves they are fighting the forces of evil; globalization, Islam, immigration, etc. They desperately want to be the heroes of their own stories and through the use of fear and, in many cases, relatively low level of education and/or credulous consumption of social media that confirms their biases, they are easily manipulated into believing that they are making history.

While some members seem to question Malenfant's vision of spiritual warfare.... 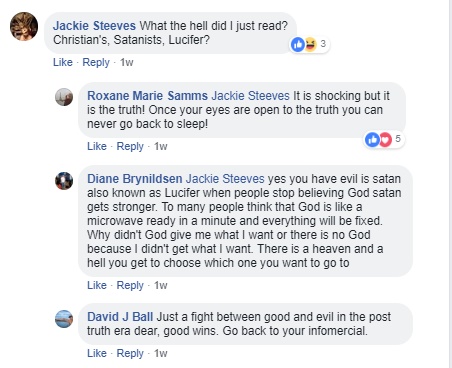 .... many others wholeheartedly support it: 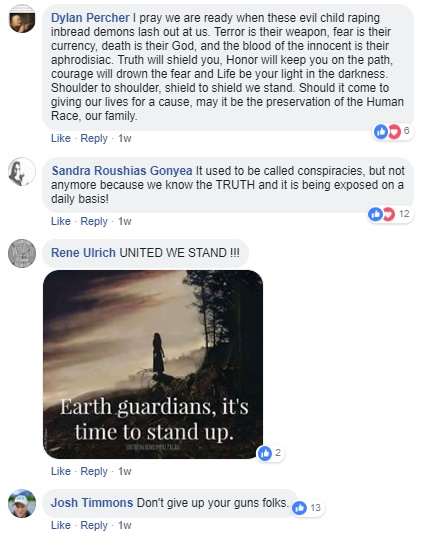 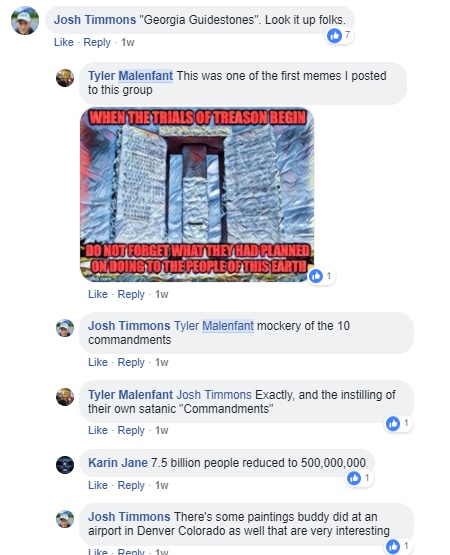 It is the second part of Malenfant's missive I've highlighted in red however that is of concern to me:


The preceding article discusses the arrest of a Coast Guard officer who created a hitlist of journalists and leftist politicians. He appeared to be in the planning stages of a mass murder.

Given the political discourse it shouldn't be surprising. The current occupant of the White House has made it a point of dehumanizing his political opponents and especially of journalists. He has referred to journalists as "the enemies of the people" mirroring the rhetoric of authoritarian regimes worldwide past and present. He calls any news not deferential to him "fake." His populist supporters in the United States and increasingly around the world including Canada have begun to parrot this language and Malenfant is no exception.

In fact Malenfant even goes further. Not only are those, including journalist and politicians, who don't conform to his very specific worldview enemies of the people and traitors, they are evil. Full stop. They are demonic and led by Satan and he further envisions a time of holy retribution. In fact he takes glee in imaging the punishment of the enemies that will result when his side takes over.

Once you've stripped someone of their humanity and characterized them as an entity out to harm them, any atrocity is possible: 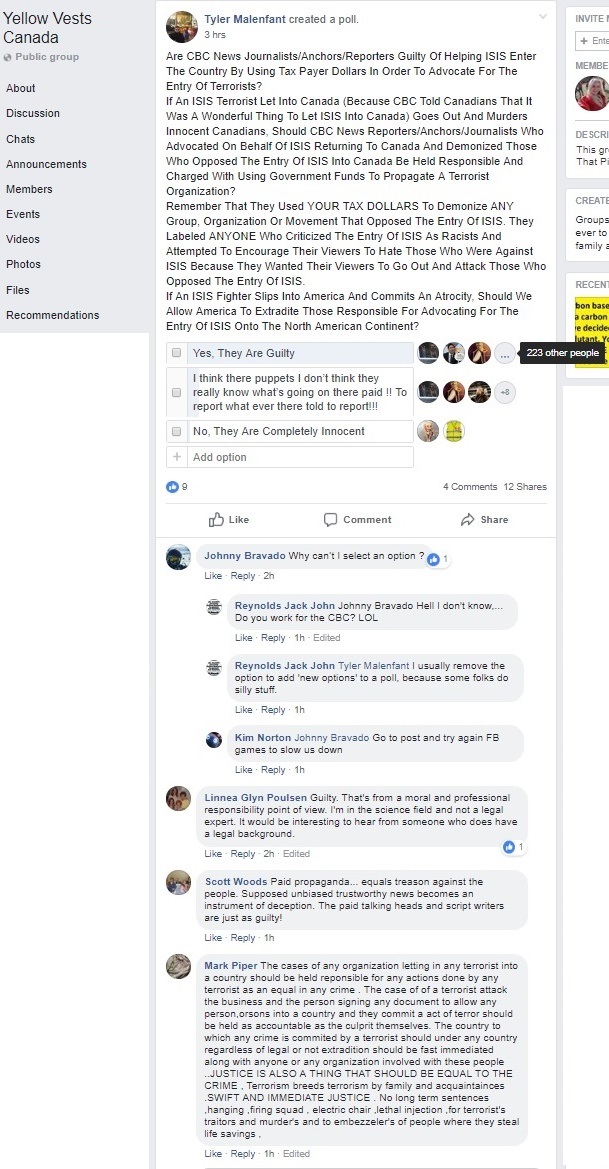 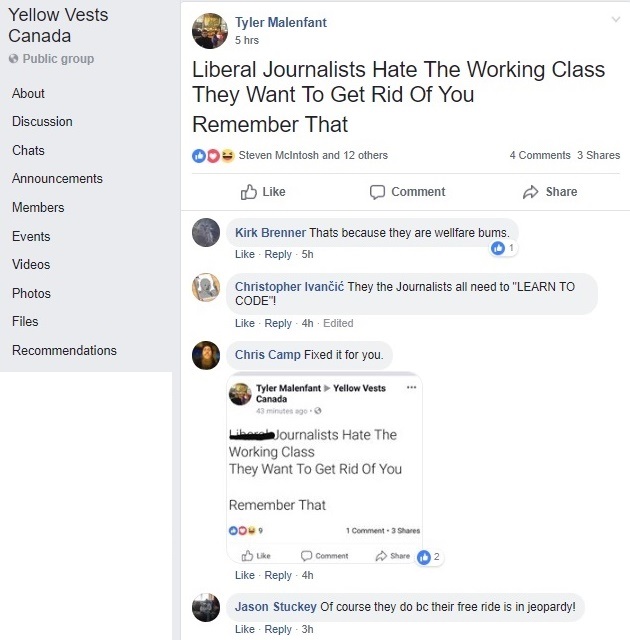 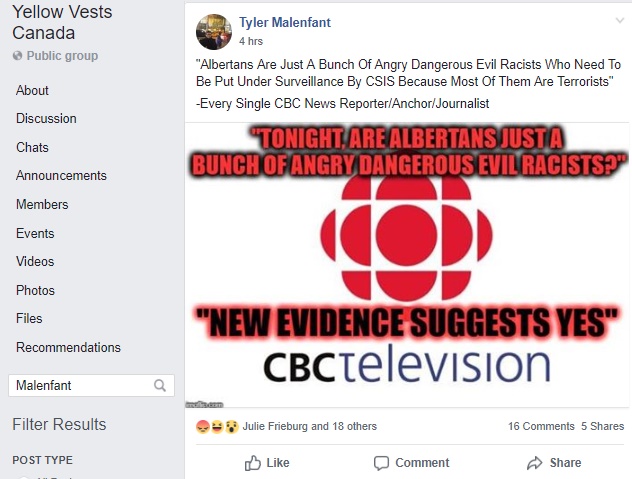 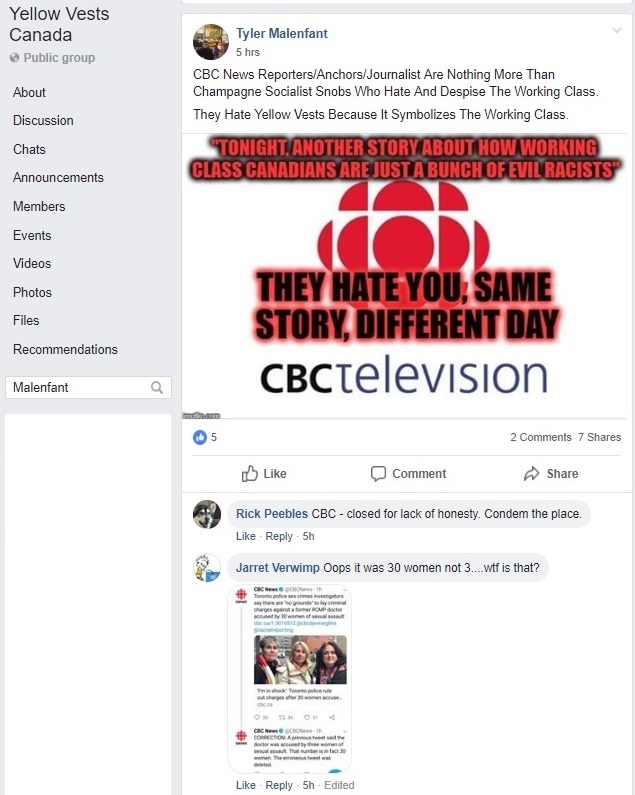 It doesn't take much of a leap to imagine that there are others as extreme as Malenfant, perhaps even more so, who don't want to wait for some future final judgement to get the ball rolling:
In ARC's most recent article, I discuss this concern as well as claims from Malenfant that any assassination attempt that might occur would be a "false flag" even while his own members celebrate and advocate for political assassination:
In a rather hypocritical twist, he does however suggest that critical media coverage of extremism within the reactionary Yellow Vest protests in Canada endangers Yellow Vest members all the while continuing to post dangerously dehumanizing characterizations of the media: 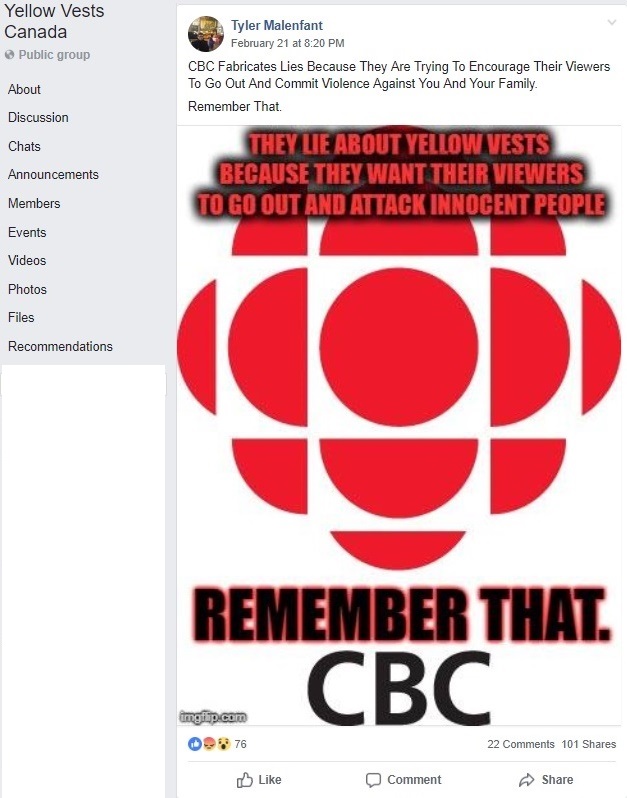 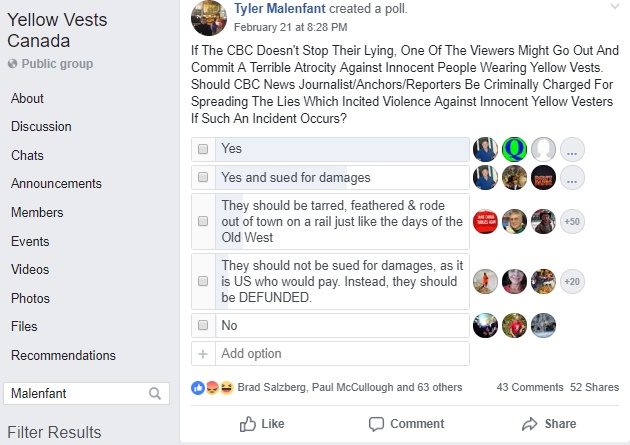 Again, I am genuinely concerned that it is becoming increasingly less a case of "if" and more a case of "when" something horrible happens.
Posted by Nosferatu200 at 23:26