It has been an interesting week in the news. Donald Trump attacks traditional allies including Canada (specifically the Canadian prime minister) and his supporters in this country eat it up. Some of them have openly advocated for the invasion of the country to remove the Liberal government by force. Others "merely" want him to impose punitive tariffs on the country so that Canadians are made to suffer for the folly of electing the Liberals. Most of those self-described "patriots" ARC keeps an eye on unironically continue to refer to Justin Trudeau as a traitor. In the meantime these same "patriots" celebrate when Trump refers to a man who inherited his dictatorship from his father and grandfather and who's government is responsible mass execution of dissidents and the imprisonment of anyone who is believed to oppose the regime as being "tough" but who still "loves his people."

Really though, none of this is at all surprising as these elements of the far right in Canada, the United States, and many other countries have openly embraced ethnic nationalism and authoritarianism despite still claiming to favor democratic freedoms.... so long as those democratic freedoms are only afforded to people who look and think like they do.

POLL: 52% of Republicans would support postponing the 2020 presidential election if President Trump called for it.


I recently read a very interesting article that discussed the phenomenon in the United States. Research indicates that intolerance of minorities cause much of the majority population (white) to reject the principles of democracy when it is seen as benefiting otherwise marginalized peoples and results in a willingness to embrace authoritarian forms of control that will maintain their dominance even in the face of demographic changes:


A new study, however, suggests that the main threat to our democracy may not be the hardening of political ideology, but rather the hardening of one particular political ideology. Political scientists Steven V. Miller of Clemson and Nicholas T. Davis of Texas A&M have released a working paper titled "White Outgroup Intolerance and Declining Support for American Democracy." Their study finds a correlation between white American's intolerance, and support for authoritarian rule. In other words, when intolerant white people fear democracy may benefit marginalized people, they abandon their commitment to democracy.

Miller and Davis used information from the World Values Survey, a research project organized by a worldwide network of social scientists which polls individuals in numerous countries on a wide range of beliefs and values. Based on surveys from the United States, the authors found that white people who did not want to have immigrants or people of different races living next door to them were more likely to be supportive of authoritarianism. For instance, people who said they did not want to live next door to immigrants or to people of another race were more supportive of the idea of military rule, or of a strongman-type leader who could ignore legislatures and election results.

The World Values Survey data used is from the period 1995 to 2011 — well before Donald Trump's 2016 run for president. It suggests, though, that Trump's bigotry and his authoritarianism are not separate problems, but are intertwined. When Trump calls Mexicans "rapists," and when he praises authoritarian leaders, he is appealing to the same voters.

Given demographic changes, the far right find themselves in a bit of a bottle-neck so they have had to be much more creative in maintaining control, and this often means subverting the most basic of democratic practices, the vote:


White people continue to decrease as a percentage of the U.S. population; at some point, it's going to be impossible to win a national, democratic American election with a platform that alienates people of color. The GOP, seeing their coming demographic apocalypse, has pushed voter ID laws and other barriers to voting to try to prevent black and other minority voters from getting to the polls. In Wisconsin, Republican Governor Scott Walker even attempted to delay elections for state seats that he believed Democrats would win.

There are, of course, even more extreme positions:


Miller and Davis' paper quotes alt right, neo-fascist leader Richard Spencer, who in a 2013 speech declared: "We need an ethno-state so that our people can ‘come home again’… We must give up the false dreams of equality and democracy." Ethnic cleansing is impossible as long as marginalized people have enough votes to stop it. But this roadblock disappears if you get rid of democracy. Spencer understands that white rule in the current era essentially requires totalitarianism. That's the logic of fascism.

We've been hearing more and more about the desire to create an "ethno-state" here in Canada from a number of groups and individuals including Faith Goldy and Ronny Cameron. The patently undemocratic attitudes that would deny certain Canadians their democratic rights and create a tiered system of citizenship was also proposed by Steven Myatt recently:


We can laugh (and I did) about the clumsiness of Myatt talking about running "in politics" as well as the fact that this is a position that is so patently unconstitutional the courts would strike such a law down immediately (this assuming that Myatt would ever find himself in a position to enact such a law which seems less likely than me beating Justify in a footrace). It would also ironically disallow the first two prime ministers of the country from being involved in politics as well as numerous other Canadians who have emigrated from somewhere else.

But let's be honest here. Myatt is NOT talking about someone who looks like this:

Myatt IS talking about someone who looks like this:

The truth of this can be seen in one of Myatt's responses: 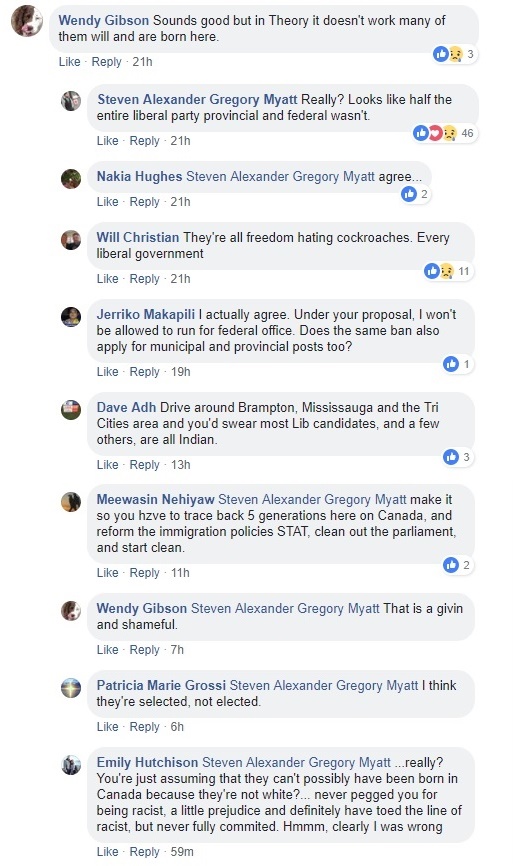 Well, when it comes to the House of Commons and the Senate federally, there were a total of 56 who are citizens of Canada through naturalization. However it is more clear that Myatt thinks that some people "look" Canadian and others don't. Considering he had 46 people seemingly agreeing with him, it seems that there are others who feel the same way.

One of those people is someone we haven't seen in a long, long, time: 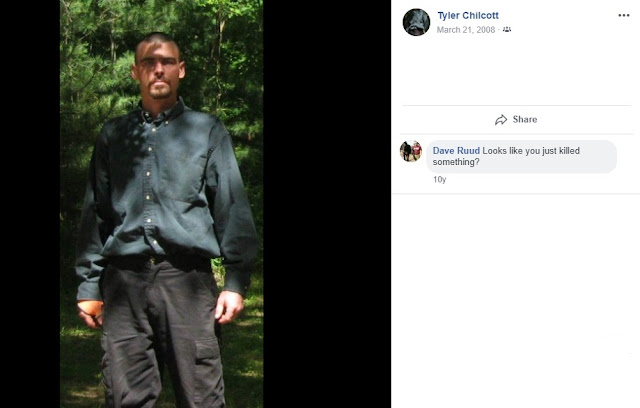 That would be Tyler Chilcott, formerly of the now defunct neo-Nazi Northern Alliance based out of London, ON: 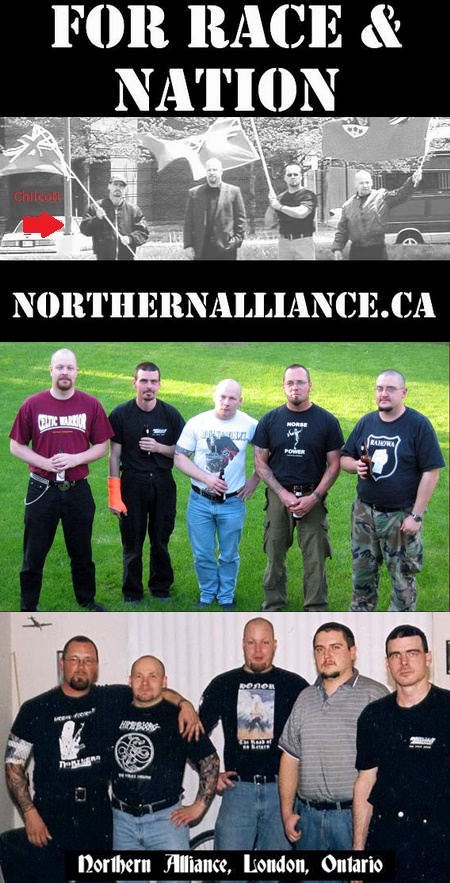 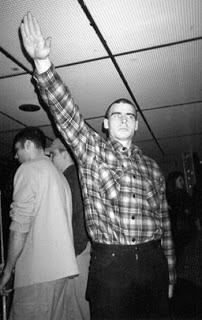 On the archived website, Chitcott had published articles with titles such as "Wholistic Racialism", "Please Rise and Sing", and "The Native Conflict" as well as some really horrible poetry.

Congratulations Steven. Tyler Chilcott likes the cut of your jib.

The first person who posted "Blood and Earth" hearkens to the "Blood and Soil" ethnic nationalism heard at the Charlottesville rally last summer and, even more prescient,  was a slogan used by the Nazis (Blut und Boden).
Most of those replying to Myatt's musing appear to embrace this ideology as well. In fact some don't think it goes far enough, suggesting that voting needs to be restricted to the 4th or 5th generation. Considering a "generation" is between 20 and 25 years, those commenting don't appear to realize that none of them would be able to vote under this particular proposal.... though again, they aren't really talking about the "old stock" Canadians who look like them: 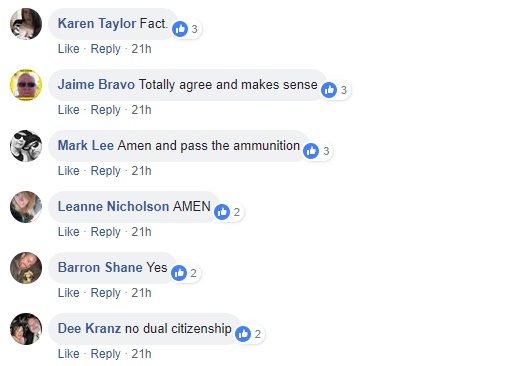 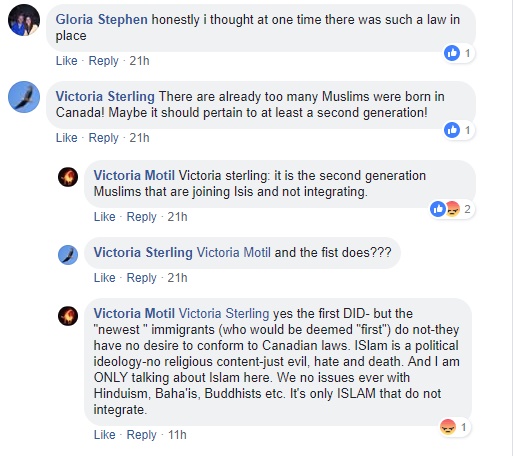 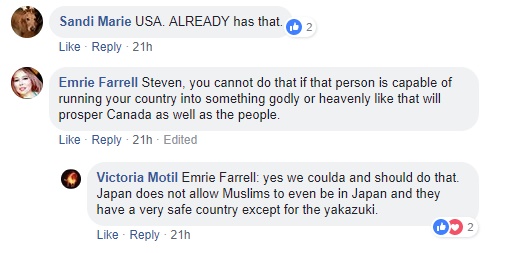 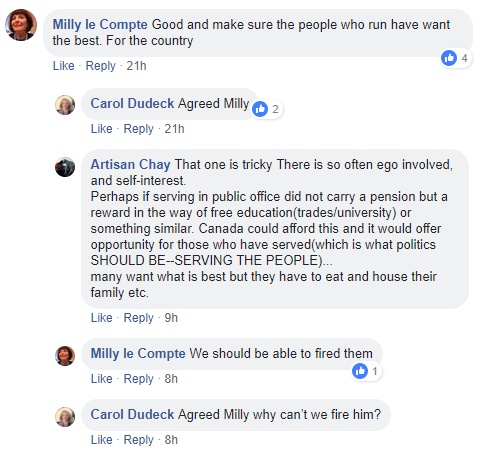 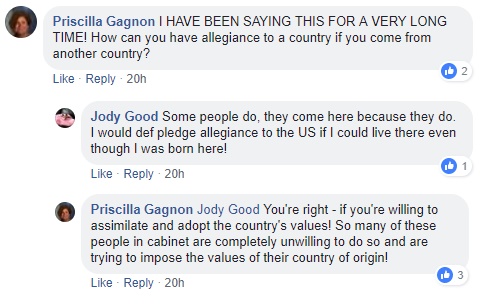 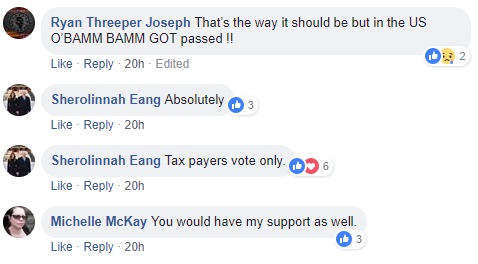 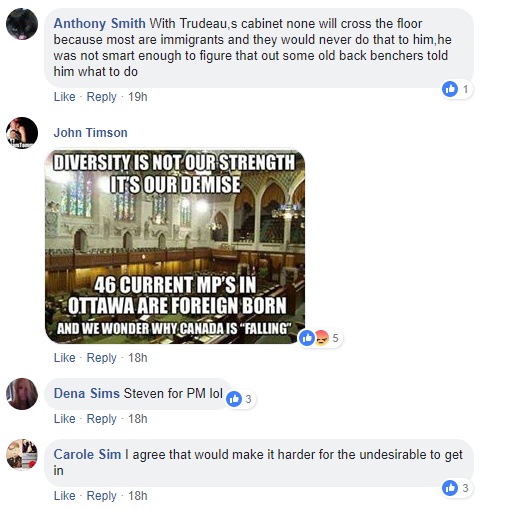 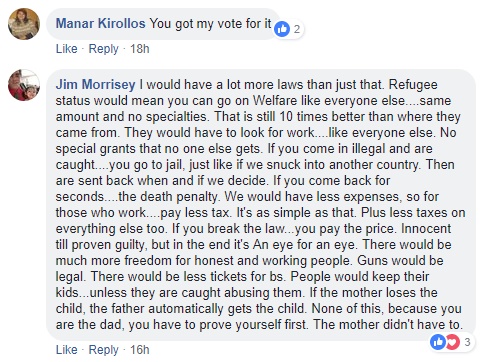 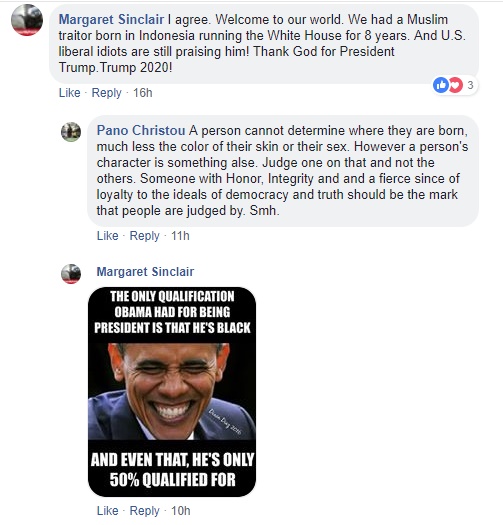 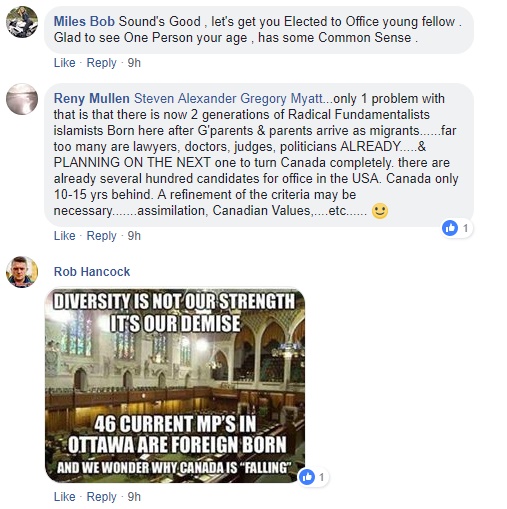 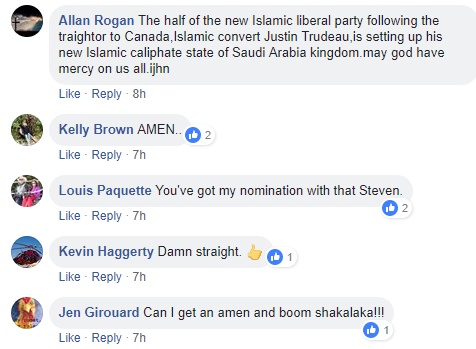 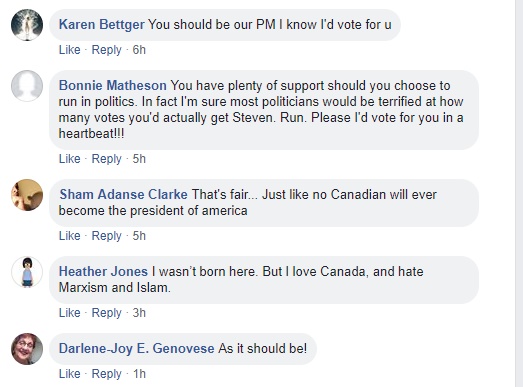 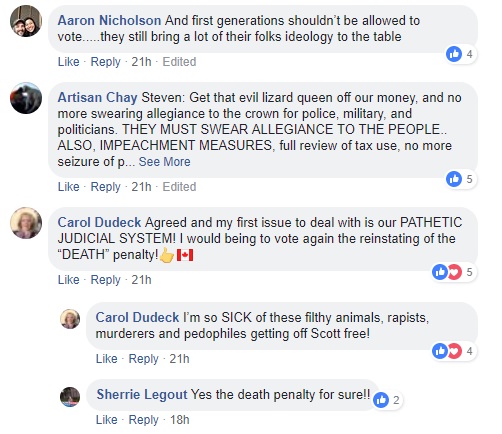 While some do object.... 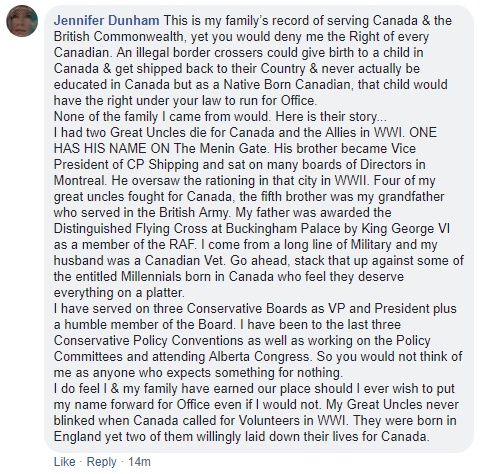 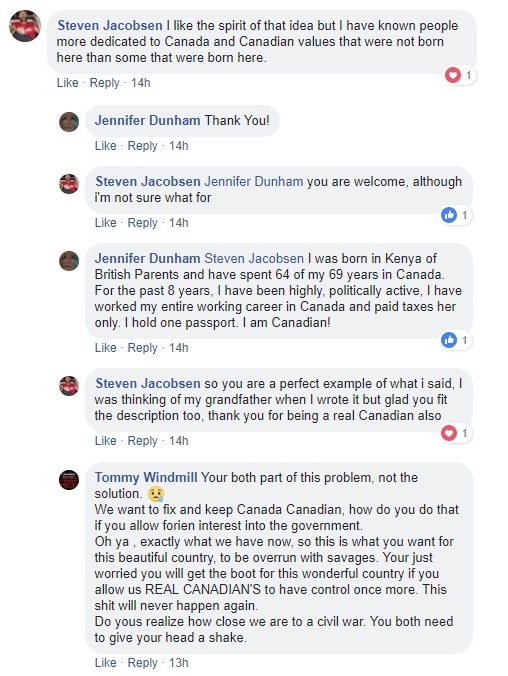 Should you be confronted by a person claiming to be a "patriot" who is fighting to keep Canada free (usually by showing up at far right rallies, perhaps wearing airsoft gear), ask them who should have the right to vote and what a citizen looks like.

I imagine their answer to these questions will tell you all you really need to know about their true motivations.
Posted by Nosferatu200 at 00:05