First, I would be remiss if I didn't post Gallant's second video in which he spends a little over eight minutes complaining about anti-racists and how ARC treats him while at the same time claiming he never thinks about us:

Yeah, I know. I sort of beat a dead horse at the end with all the video clips. I had a little too much fun with it, but it did serve as a reminder of the awesomeness of Fatboy Slim.

In any case, this was the second of two videos Gallant posted on the same day. ARC posted that first video in the article detailing the Northern Guard's falling out with Steven Myatt; Gallant was very blunt, specific, and kind comically over the top in describing his beef with Myatt while also strongly implying that others who have been critical of Gallant are also leaving what is increasingly looking like a shrinking ship.

Yesterday, Myatt responded though initially he didn't name the Northern Guard by name: 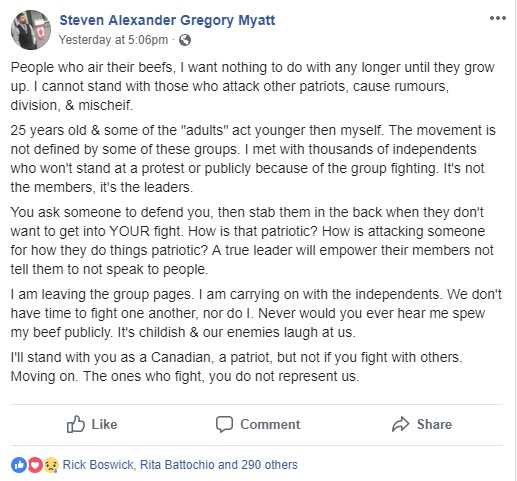 He was later asked specifically about the Northern Guard. His rationale for rejecting them was most enlightening: 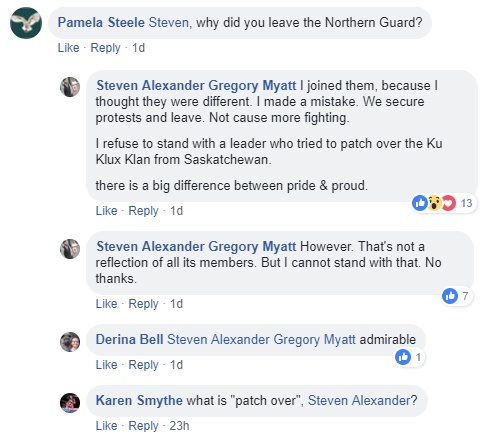 I can only imagine that Myatt read about the KKK link to the Northern Guard through ARC's article on the subject. This, and all the other times that these far-right dotards provide links to ARC articles (including the Canadian Combat Coalition, La Meute, and many others) in order to inform their membership sort of hurts their claim that ARC is "fake news."

Myatt's broadside also calls into question his relationships with Georges Massaad who appeared to be involved with the Northern Guard at least as of last week as well as Ronny Cameron who seems to be close to the hate group as well. In fact there are some posting on Myatt's profile who have expressed their concern about Cameron:

Next I expect Gallant to post a video warning Myatt that he's going to be put on notice.... but not actually do anything because Nick Gallant is sort of a weak leader.

You know who isn't weak though?