A small mosque serving 15 families was the target of an arsonist on June 16 not long after evening prayers:


The three people who were praying inside had left the mosque and were still in the parking lot when a fire started at the building's south entrance at around 11 p.m. on June 16.

Surveillance footage recorded by the mosque's security cameras captured the flames as well as a person in a dark hoodie leaving the property with what appears to be a red jerrycan shortly after 11 p.m.
....
"It was quite brazen," Baterdouk said. "Typically you would think that someone who wants to commit arson or vandalism, if they see people ... they probably would change their mind. But this individual, it does not seem to be a concern for him.

"That makes it a little bit more scary to see the fact that the individual knows that there's people on the property, whether they're inside or not, and he still went ahead with it."
....
The mosque is working with RCMP to investigate the fire, said Edson Islamic Society board member Jocelyn Pettitt.

The society is not treating the fire as a hate crime until police share more information, she said.

"Our doors are always open," Pettitt said. "If there is any concern or feelings of malice or confusion about our faith and our religion, come talk to us or any member of the Muslim community at the mosque. We have plenty of information and they're always willing to answer questions."

The incident has been condemned by a number of politicians including but not limited to the premier, leader of the UCP and Alberta Party, and the mayor of Edson: 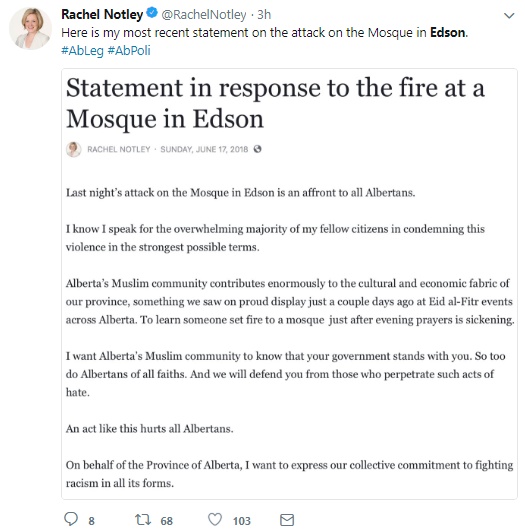 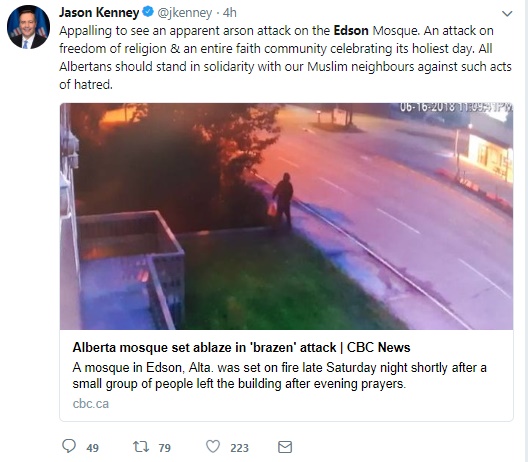 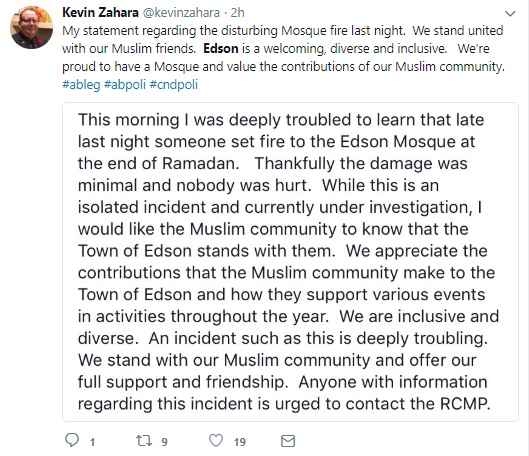 These are the reactions that one would hope to see from everyone.

Of course, this blog covers people who wallow in hatred and their reactions were quite different and included congratulatory statements directed to the suspect, wishes the the building had been occupied, threats that more such attacks will occur in the future, and claims that it was a "false flag" or committed by Muslims: 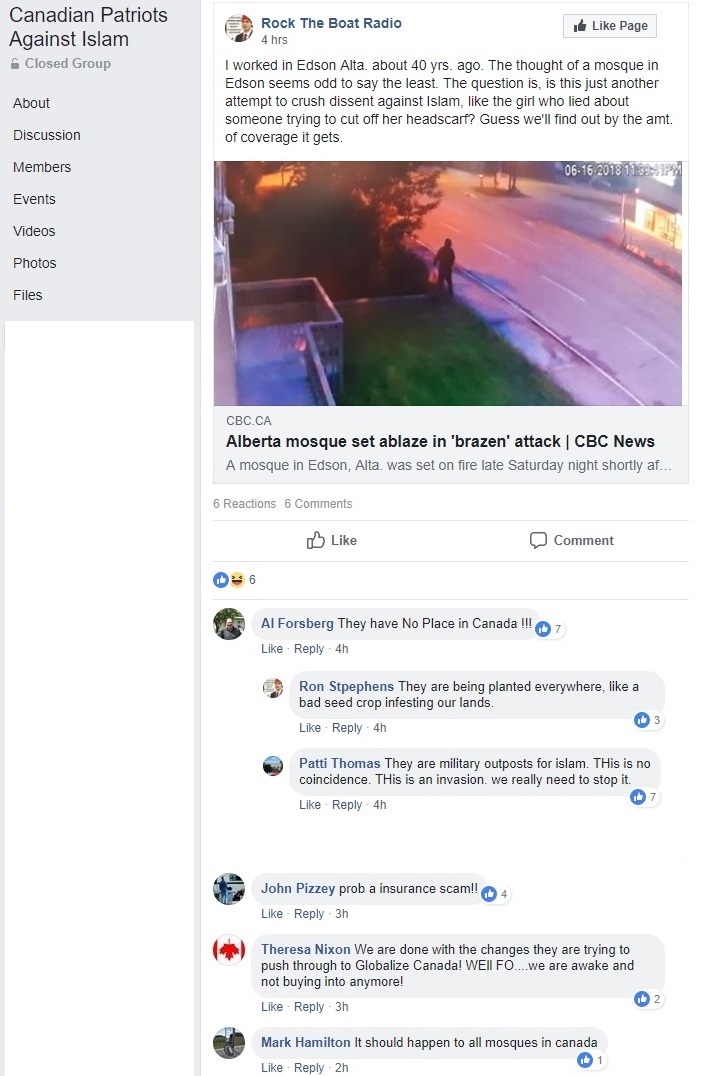 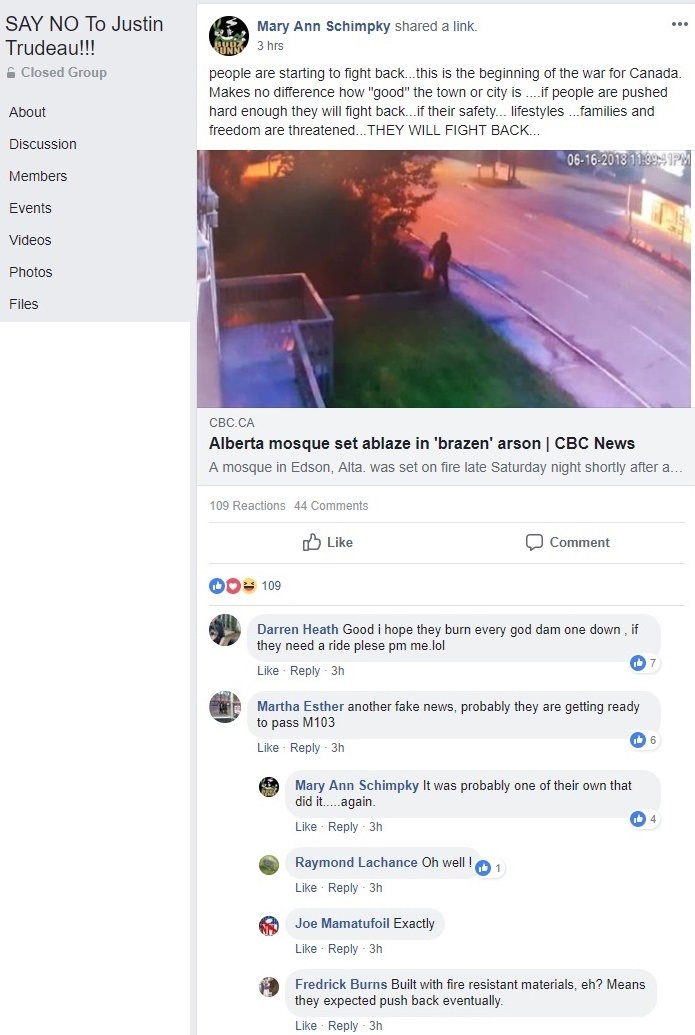 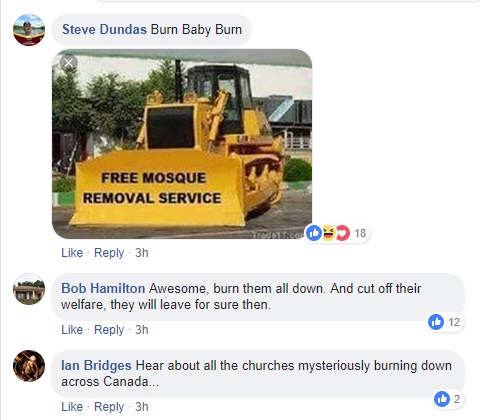 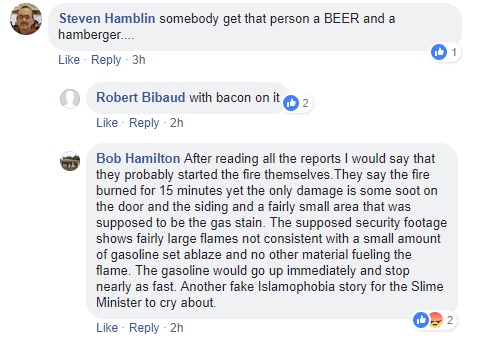 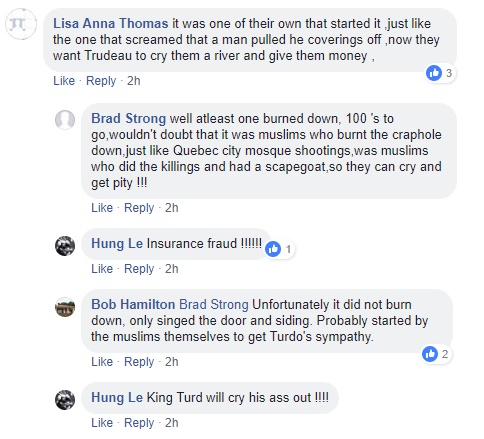 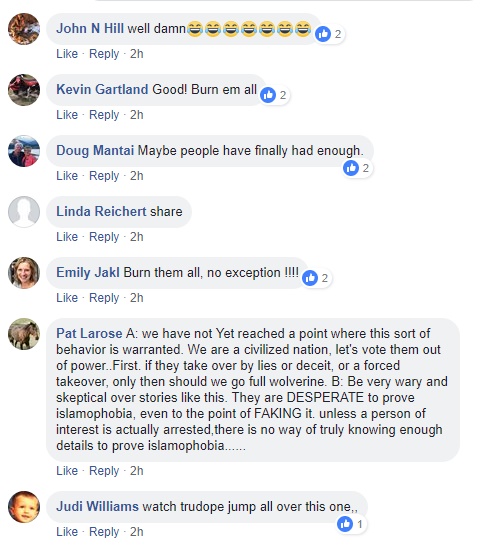 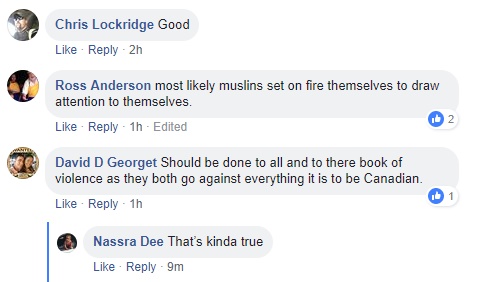 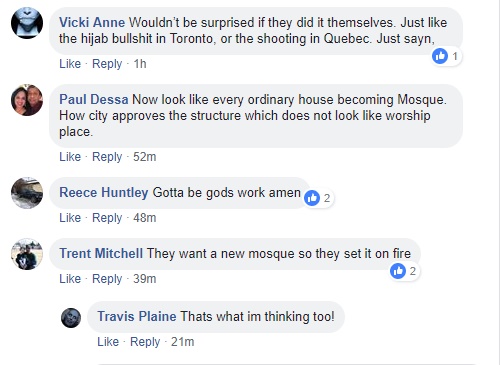 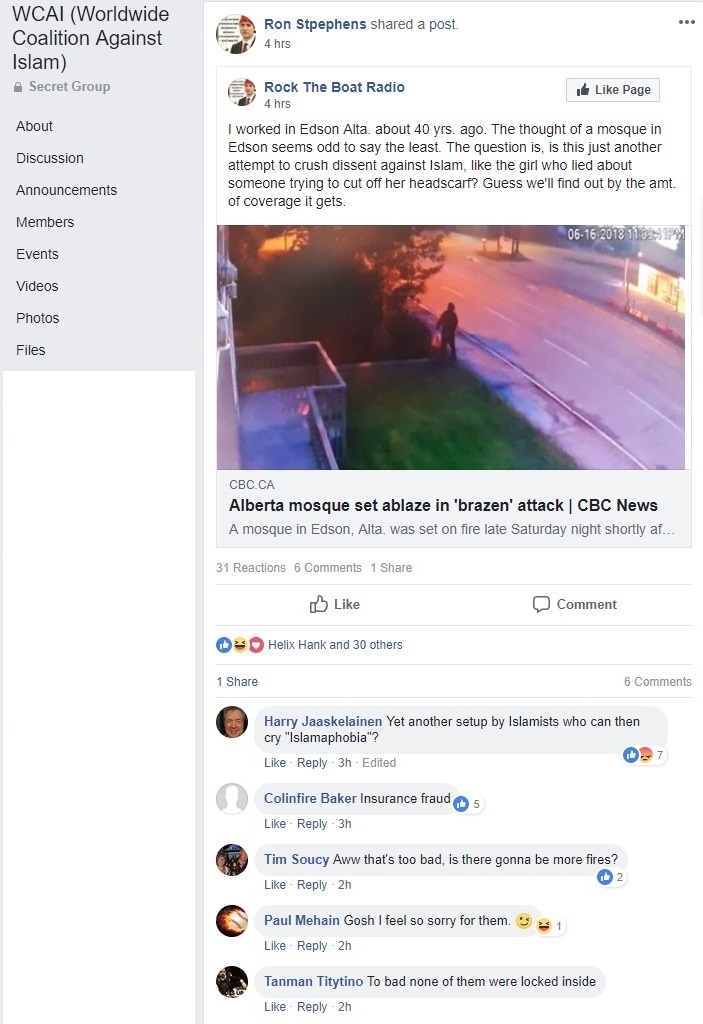 Right. The media hasn't said a word about the arson that took place at an Alberta church.... and as evidence that the media has been silent Sharon posts a link to the story found in the "Calgary Herald."

The dumb is strong with this one.

I'm sadly sure that there will be similar comments made on the other sites ARC monitors and I may add them to this article. One thing that is clear though is these groups' and individuals' claims not to be bigots have once again been exposed as a lie.

UPDATE: And here are some more. 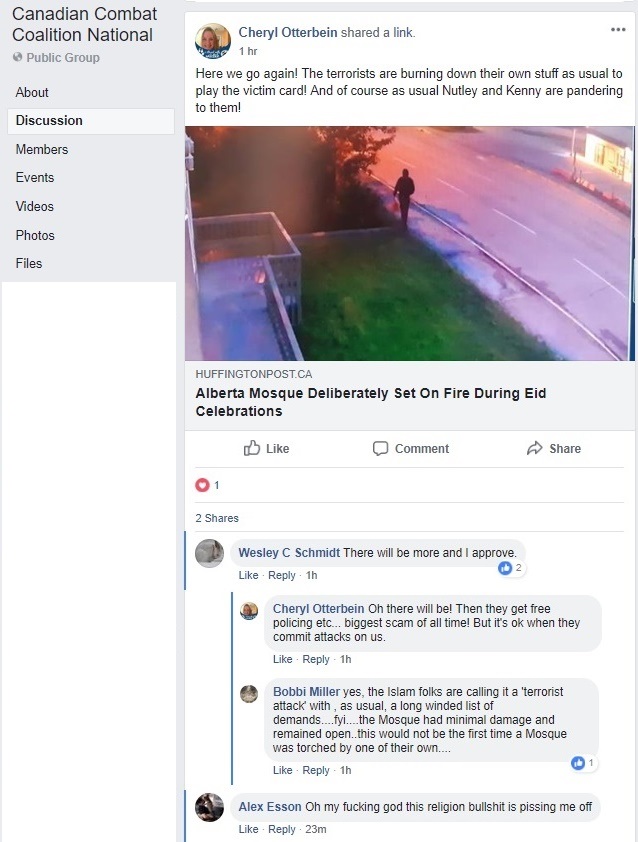 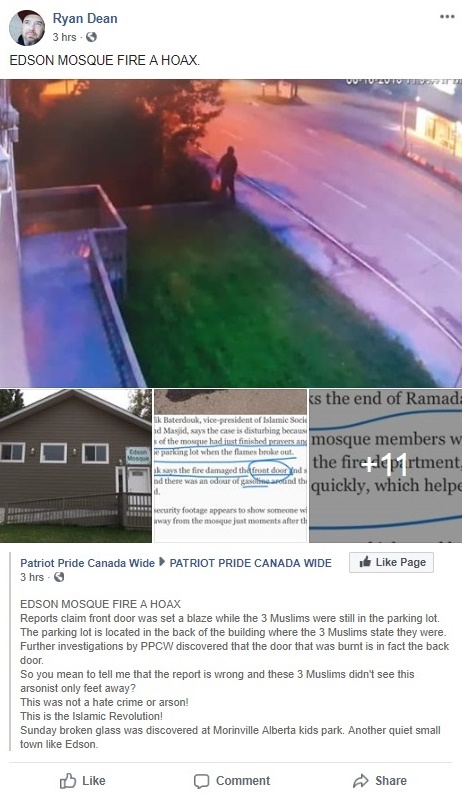 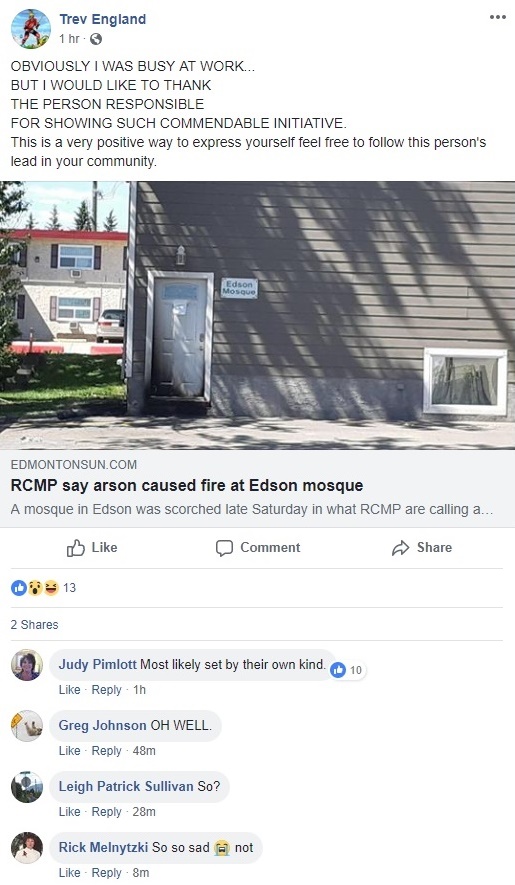 More screen shots from Trev England's "friends" were copied the next day: 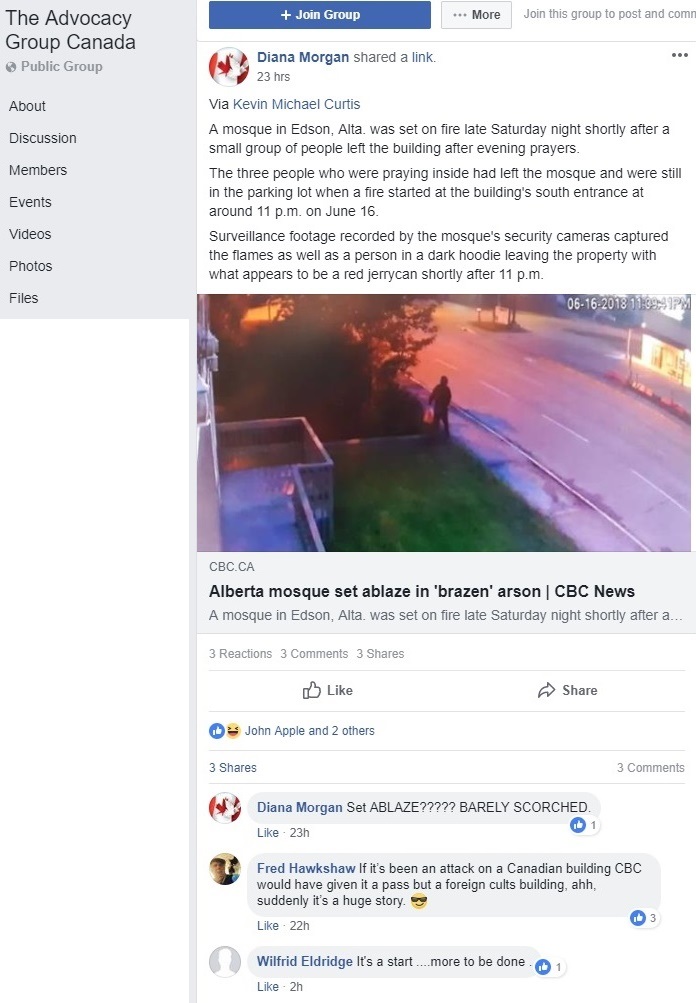 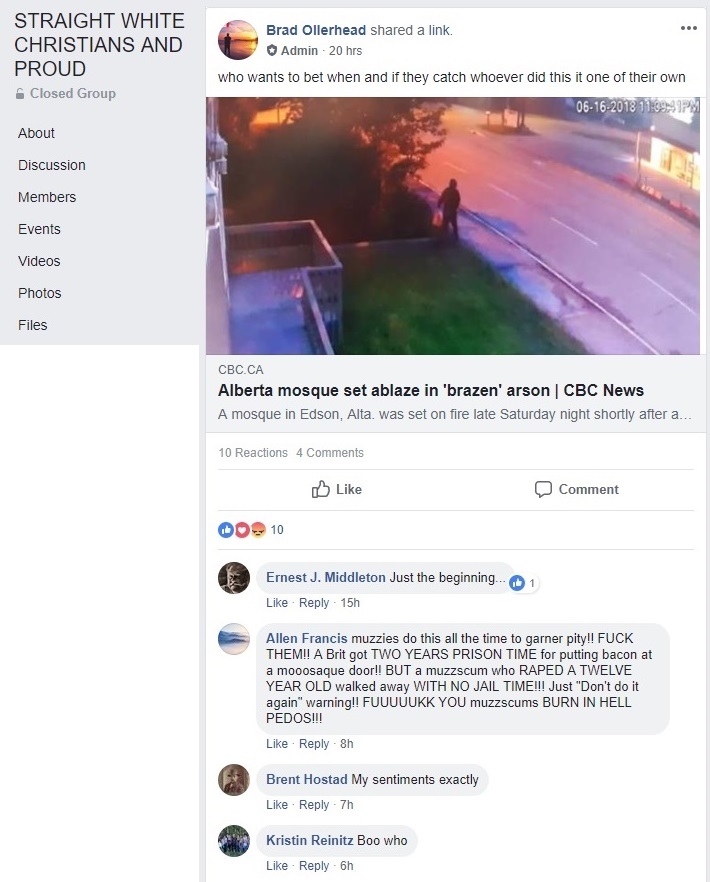 And some more from June 18: 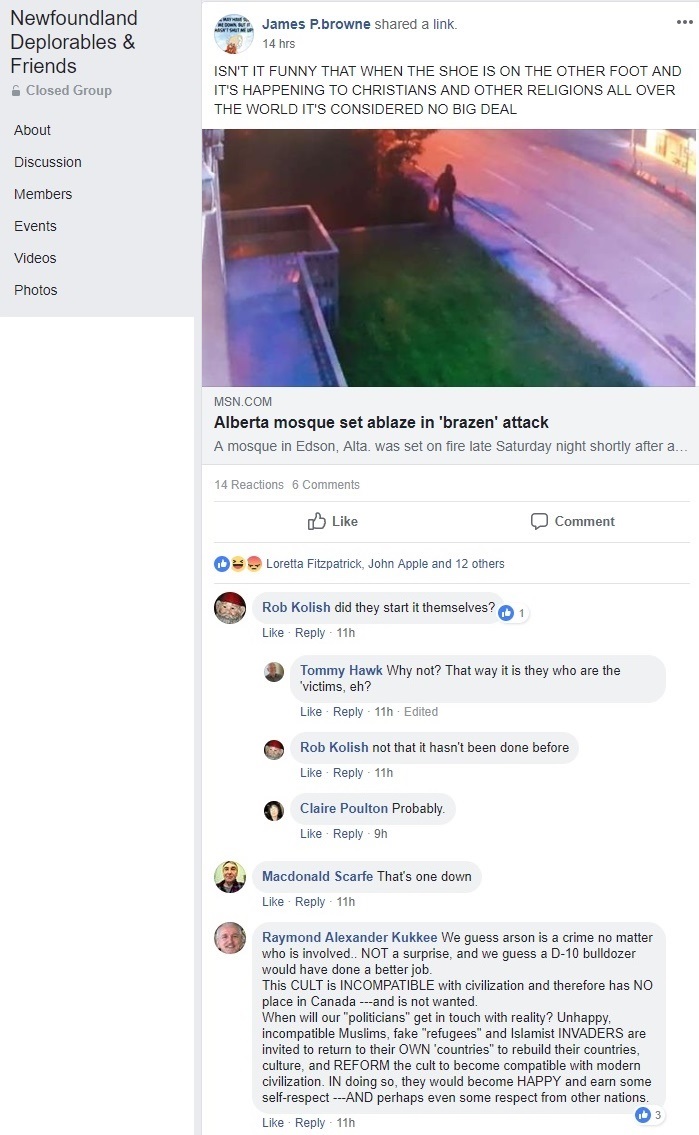 It should go without saying at this point that what Linda Huskins is claiming, as of June 18, is not true. Then again they also are absolutely convinced that the mass murder at the mosque in Quebec was also committed by a Muslim despite the fact the murderer was an Islamophobic alt-righter (who also would likely have celebrated upon hearing news of a mosque burning); sentencing arguments in that crime are ongoing.

Finally, the Alberta III% militia decide to once again show their true nature: 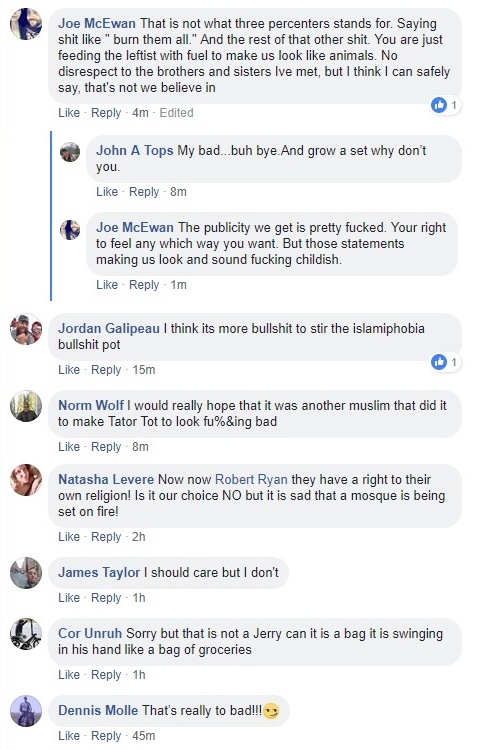 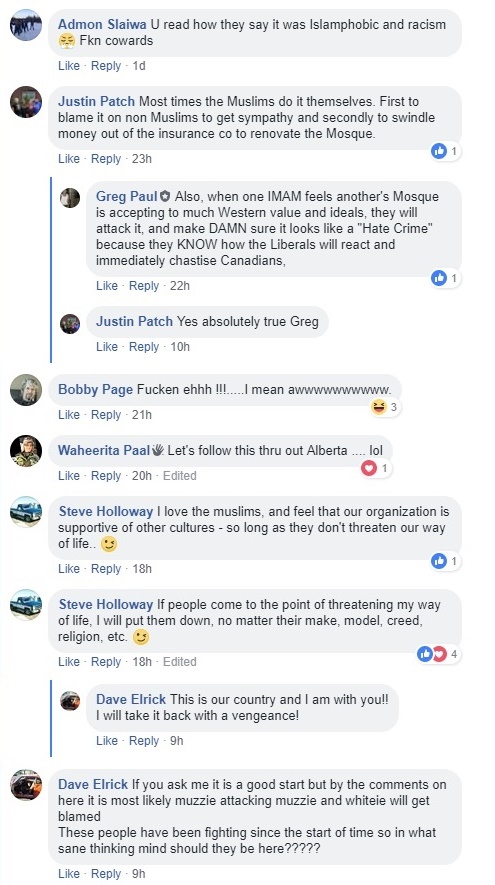 To be fair, ONE person called the members out on their hypocrisy. The response he received contained all the lies we've become accustomed to from Islamophobes: 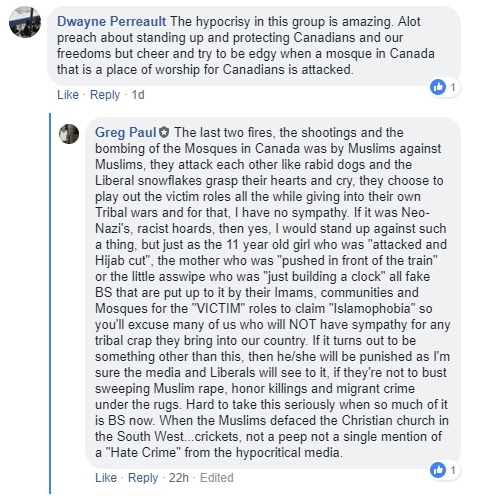