First, and I know ARC's readers will be horribly shocked by this, but Goudreau has cancelled the event he had planned for tomorrow: 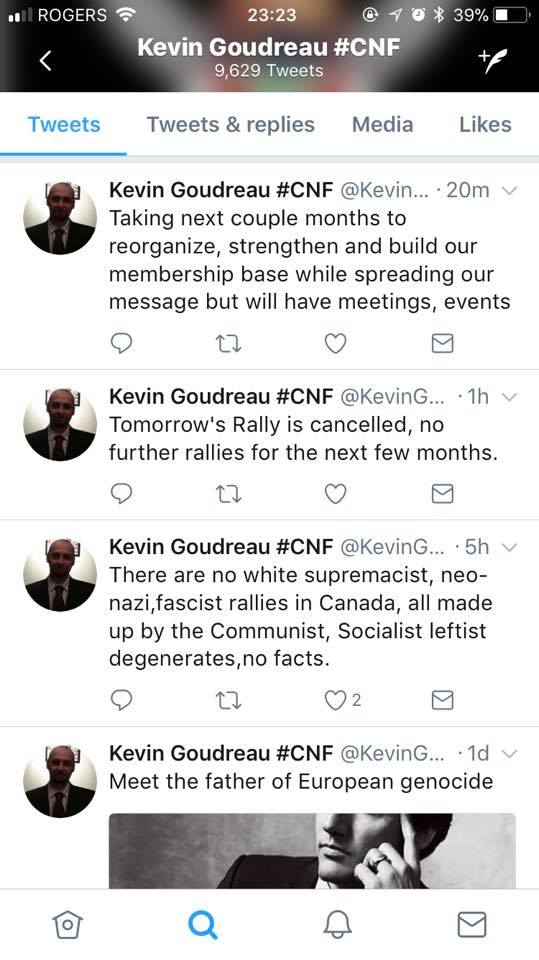 ARC published a story on how the paranoid and conspiracy theory-prone far right is going bonkers over a claim that a peaceful protest being organized by Refuse Fascism against the Trump government is, in fact, a formal declaration of war against the government, Trump supporters, and other "patriots." The insanity isn't confined to the United States but has found a home north of the 49th as well. For example, among the rationales for soon-to-be-former World Wide Coalition Against Islam Saskatchewan leader Christopher Hayes' anti-antifa event on November 4 seems to be rooted in a belief in this "civil war" hoax: 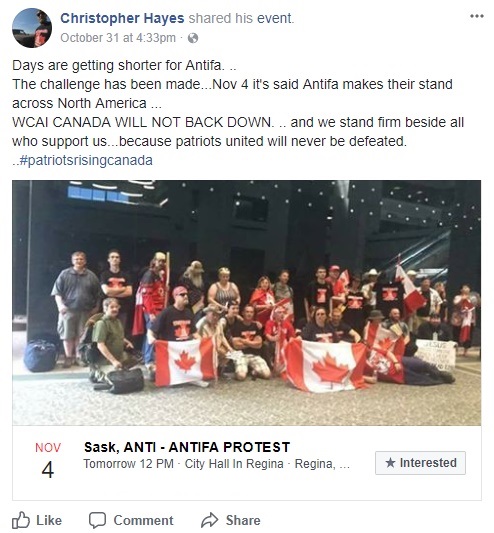 I looked at the weather report for the prairie region. Hope Hayes and his friends from Alberta who are planning on making the trip to Regina have their winter tires on.

Among those talking about this conspiracy is Ronny Cameron. To give hims some credit, he at least admits that he doesn't know what to believe, at least when it comes to what might happen in Canada.... 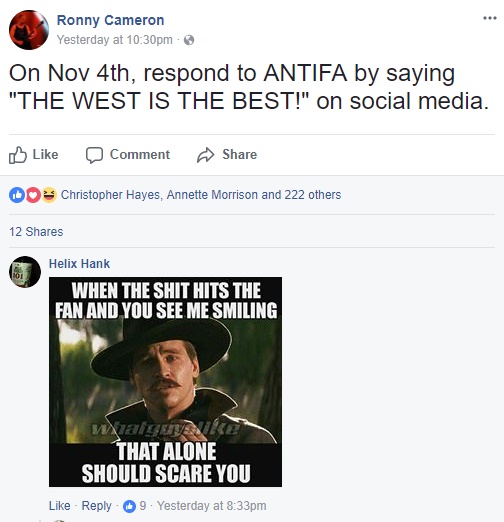 .... though he also slips into a rambling stream of consciousness about this and other issues in a video he posted later:

Believe or not, but Ronny is actually among the more lucid members of the far right when comes to talking about the hoax. Others have even more bizarre views, though at least in one case there might potentially be some pharmaceutical factors influencing the thought process:

Glen Dumont is getting his information from the usual suspects: 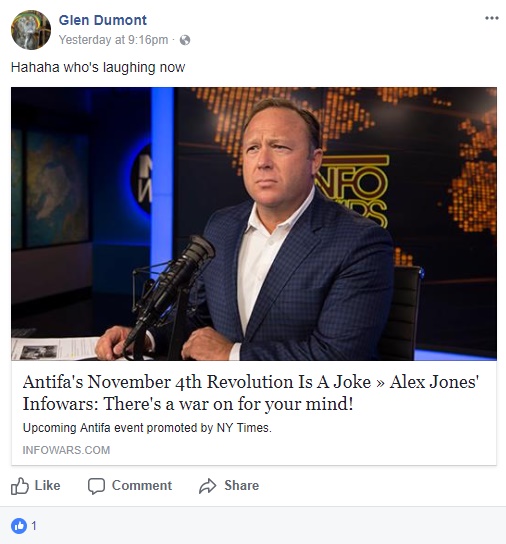 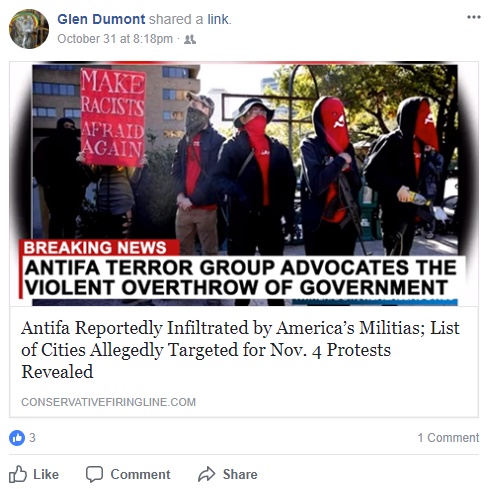 Now it would be easy to laugh at all of this because it is all patently ridiculous. Unfortunately it becomes far less funny when you see posts like this: 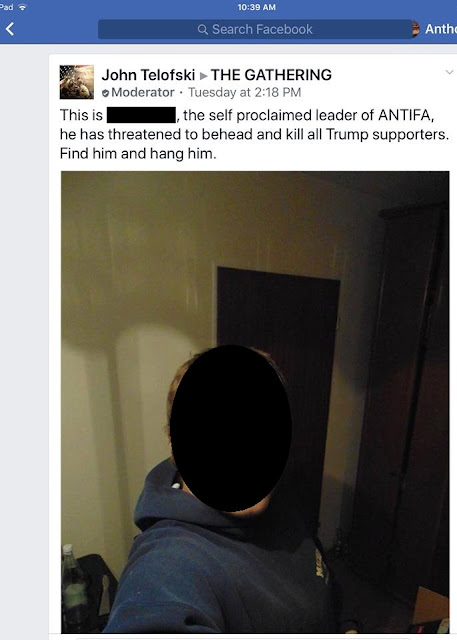 It first goes without saying that there is no leader of antifa since antifa isn't a group, but that is sort of burying the lead here.

When looking at those who believe the November antifgeddon hoax being disseminated through social media and far right disinformation sites, we aren't just looking at paranoid conspiracy theorists who we can dismiss as flakes. We're looking at paranoid conspiracy theorists who are sometimes well armed, have a penchant for violent and inflammatory rhetoric, a willingness to believe anything that confirms their paranoia, and a dismissal of information that contradicts their worldview, evidence be damned.

For example, another individual commented on Cameron's post regarding his uncertainty about what will be taking place on November 4 suggesting that the war may already have begun: 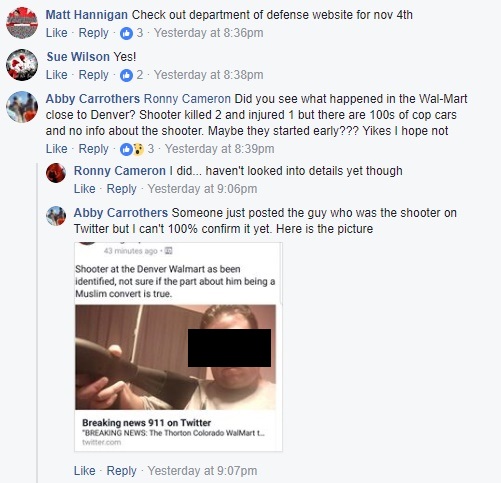 The woman is referring to an incident in which a man walked into a Denver Wal-Mart and calmly murdered 3 people. The person who's picture Abby posted is not that suspect and the suspect is not a Muslim convert.

But it certainly fits a narrative, doesn't it?

Another individual posting in the thread castigates Ronny for not appearing to be taking any other action other than posting something inane on Facebook: 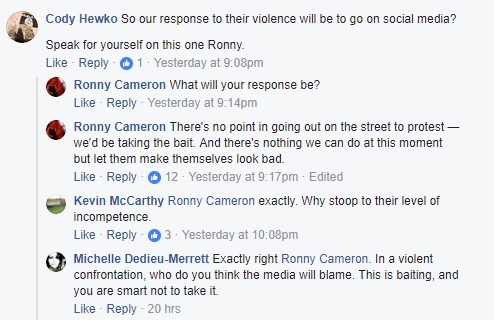 Cody Hewko's comment is actually mild when compared to others where people not only believe the hoax, but express how much they are looking forward to killing people.

A few such examples can be found in the following screen shots from members of the Canadian III% militias and some of the other folks ARC keeps tabs on: 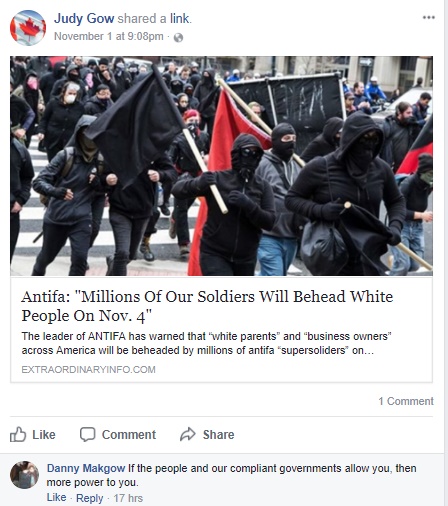 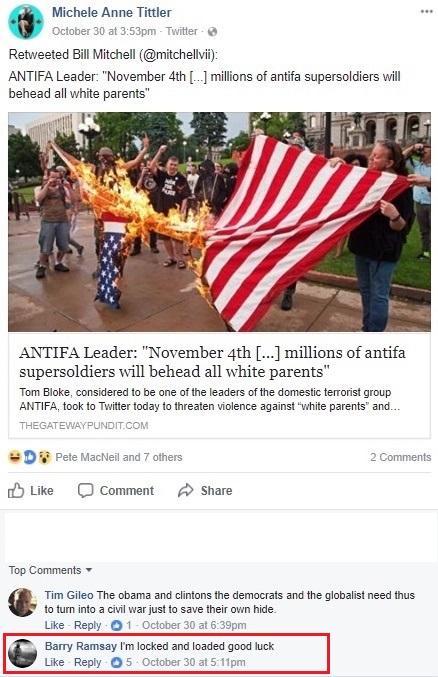 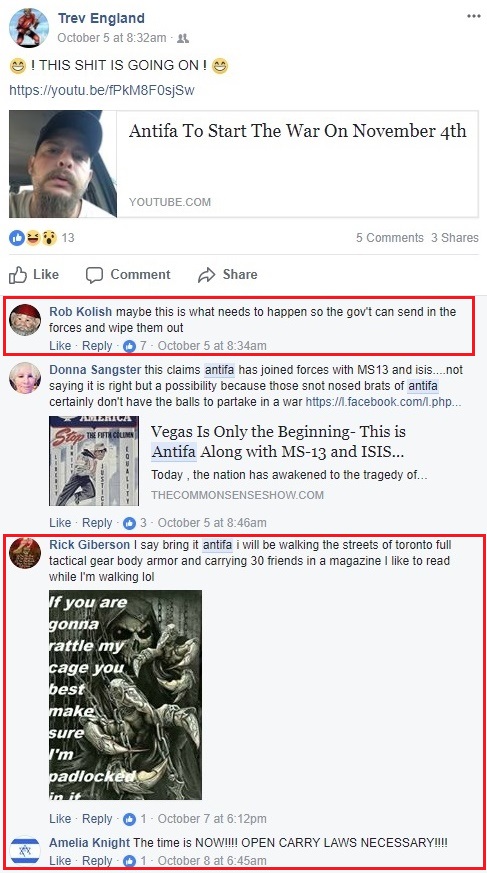 An interesting case to look at is Georges Hallak who has been active in the anti-Muslim front for some time and who has been railing against "antifa" as well: 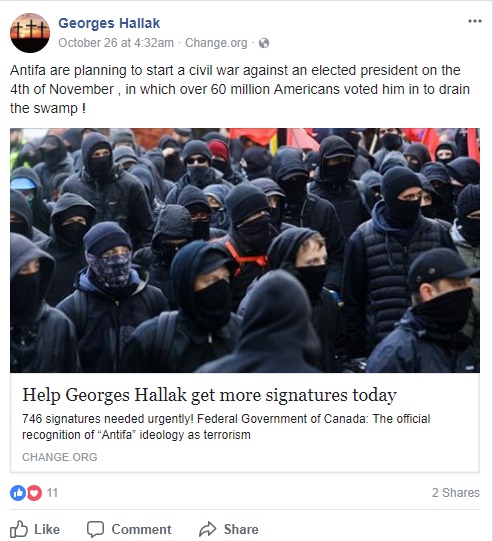 To provide some context, may of the people who post in the following thread will refer to the following full page ad found in the "New York Times" promoting the Refuse Fascism-orgainized protest events: 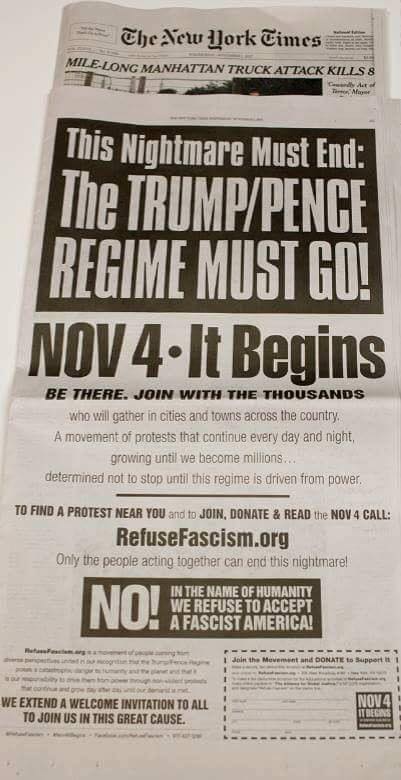 Hallak asks his supporters if they believe November 4 is a hoax: 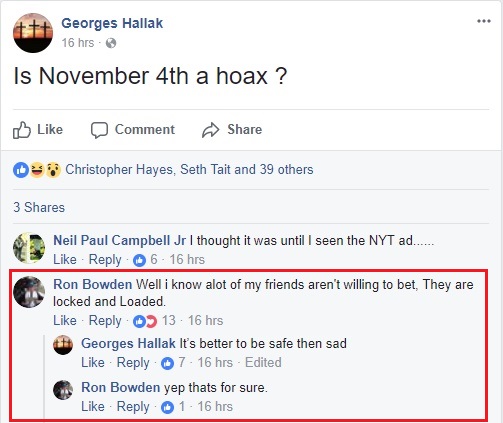 The general consensus is that it isn't a hoax, it will be violent, and that perhaps they should be proactive in taking out people they suspect of being antifa which, in the minds of the far right, are conflated with anyone opposing Trump and/or who are left of center politically: 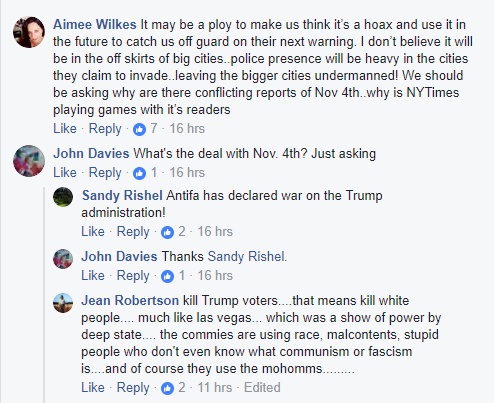 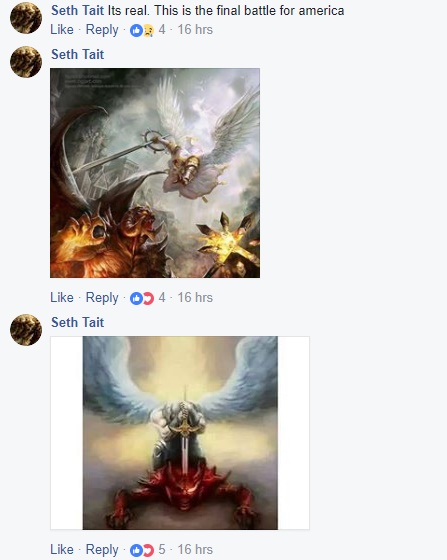 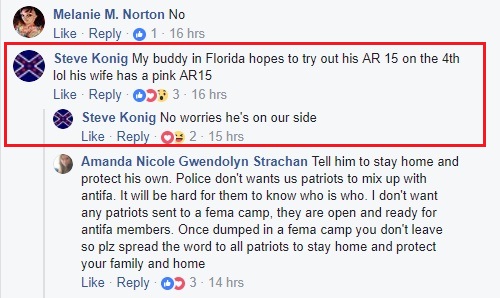 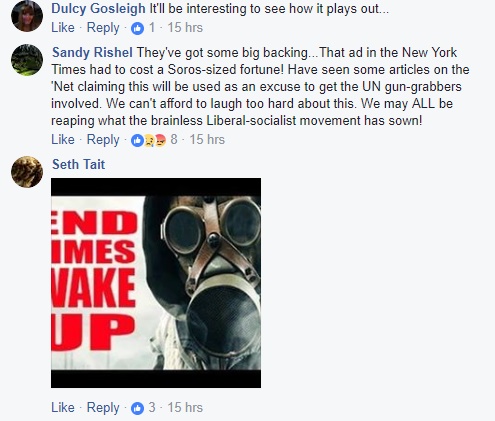 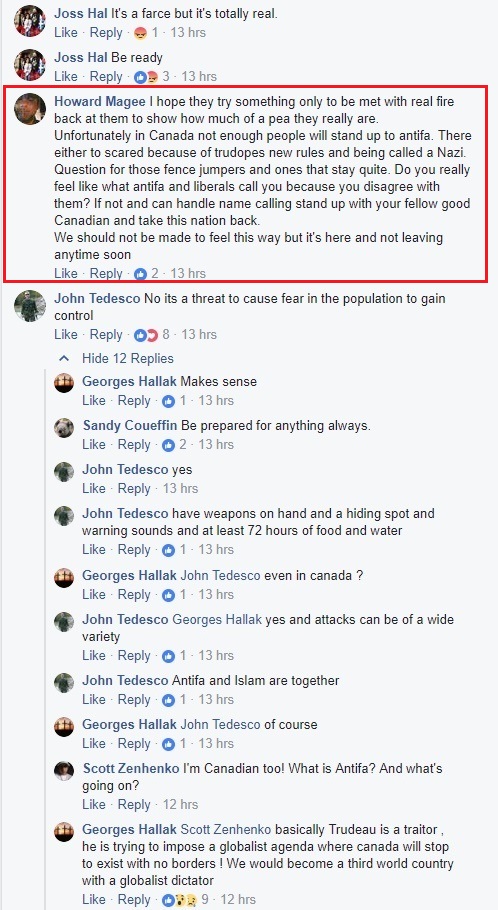 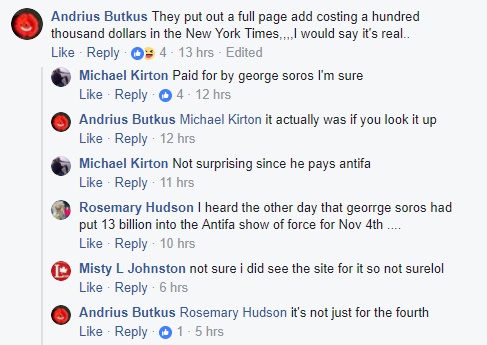 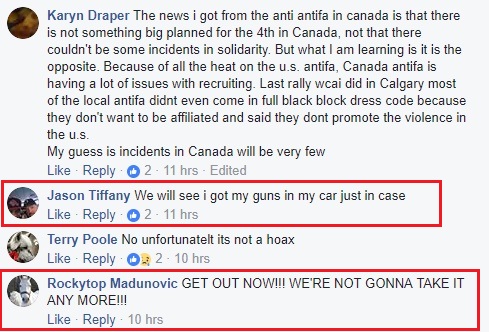 One section is especially interesting as Georges Hallak, who supported Cameron's "Trudeau Must Go" protest and who has said himself that Trudeau is a traitor who needs to be removed from office, is shocked that people would suggest protesting to remove Trump from power, suggesting that the "NYT" article was perhaps illegal because it incited people against a legitimately elected government:

To paraphrase Georges "I Love Jesus!!!" Hallak, he would like a civil war, an event in which many would die including people presumably caught in the middle, because it would help, "get rid of these undesirables."

Hmmmm, I wonder what part he played during the Lebanese civil war?

The final two statements, one of which was made in an earlier screen shot, sums up the self-contained world that the far right currently occupy: 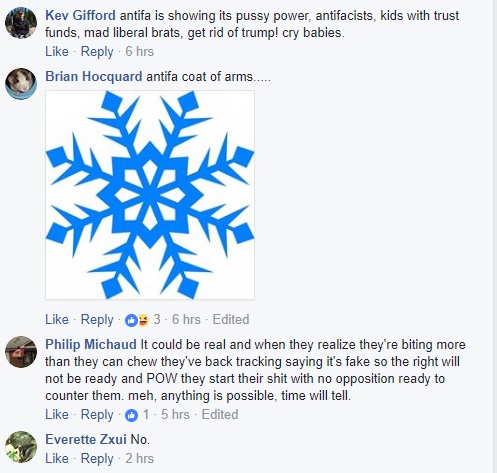 Gifford and Wallace are perversely correct, though not for the reasons that they might believe.

There is no "antifa civil war" planned to commence on November 4. When nothing happens, the far right will claim that their coverage and readiness frightened the antifa into backing down.

If something does happen, like a fist fight (which tends to be the extent of antifa violence at these events) they will view it as a justification for their fears, no matter who initiates the fight. If a trigger happy idiot starts taking shots at anti-Trump protesters, that will be labeled as a false flag. Or that person will some sort of CIA/George Soros plant used to discredit the far right. Or they will "discover" that he is an "antifa"/Democrat/liberal/socialist/communist/Muslim and that no person on their side has ever committed an act of violence. It's all #fakenews.

When you live in a bubble, you will twist yourself into a pretzel so as not to pop it.
Posted by Nosferatu200 at 23:29