This article is scheduled to be published automatically on July 1. The writer for ARC will not be available that day because there are bbq hamburgers, beaver tails, and beers that need to be consumed.

A little over two weeks ago, the Soldiers of Odin in BC were present at a protest outside a mosque in Surrey. Whether or not they were the primary organizers of the protest or if they were simply participants -- members have been attending other anti-Muslim events organized by other individuals wearing their SoO "gear" -- isn't clear from the news article. Still it was one of the more visible actions taken by the British Columbia SoO for some time.

As mentioned elsewhere on the blog, the SoO seems to be in decline and is hemorrhaging both members and entire chapters. This is also the conclusion of others who have been studying the rise and fall of the anti-Muslim gang as stated by Yannick Veilleux-Lepage, researcher at the Handa Centre for the Study of Terrorism and Political Violence at the University of St Andrews, in an article about the gang by Stewart Bell:


Soldiers of Odin "not afraid to use violence," says intel report that raises concerns about targeting of immigrants. https://t.co/DzK587Fpsz
— Stewart Bell (@StewartBellNP) June 28, 2017

“They’re starting to look like a spent force,” he said. Together with Emil Archambault of Durham University, Veilleux-Lepage identified 265 Canadians associated with the Soldiers of Odin. But many have jumped to join other organizations in the past two to three months, he said.

That latter part mentioning members joining other organizations is one that will be addressed briefly in this article and in more detail in a future article.

However, despite the decline, the gang does remain a threat and was certainly seen as a threat by the Canada Border Services Agency in 2016 when the gang was was increasing in size and the number of chapters across the country:


“Members of the SOO are generally Caucasian males between the ages of 20 and 40 who adhere to right-wing politics and ideology — some members adhere to extreme right-wing ideology and are not afraid to use violence to achieve objectives,” the CBSA report said.....The one-page report was dated April 2016 but was only recently released under the Access to Information Act. Since it was written, the Canadian SOO franchises have succumbed to infighting and some have shut down. 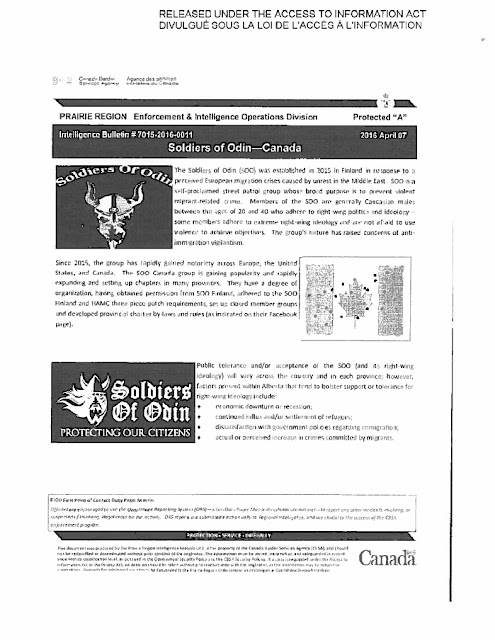 Now given the collapse of the SoO, this may all seem a bit dated. But the danger this group still presents is perhaps most evident by studying the collapse.

Prior to Bill Daniels taking over the national SoO in an apparent coup and rejecting links with the Finnish parent chapter (more on this later), there had been a number of high profile defections from the SoO, both individuals and entire provincial chapters, that ARC has detailed on these pages. In Alberta, one incident ARC didn't cover was especially ugly and included numerous examples where both sides threatened violent retribution.

Bryan "SOO" was at one time a prominent member of the Alberta chapter of the SoO, but in March he was kicked out of the group based on claims that he had engaged in behavior that wasn't appropriate and demanded the return of his SoO "gear" and patches.. Whether the claims made by the SoO leadership were true or not, Bryan decided to respond in a manner that was considered very provocative:


The reaction to this from then active SoO members, including SoO Finnish founder and neo-Nazi Mika Ranta, was swift as Bryan burnt his gear live: 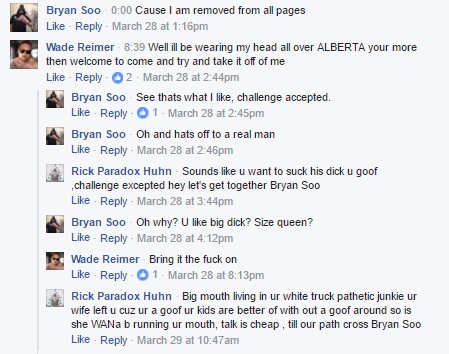 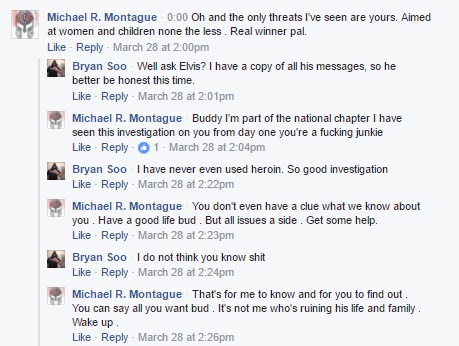 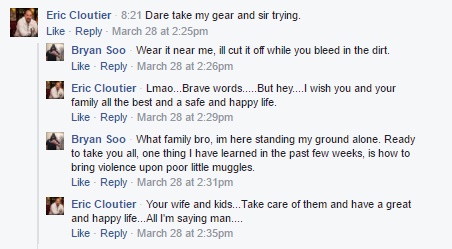 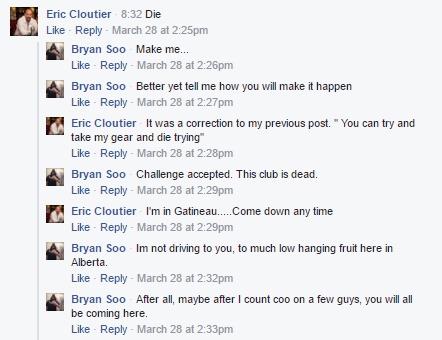 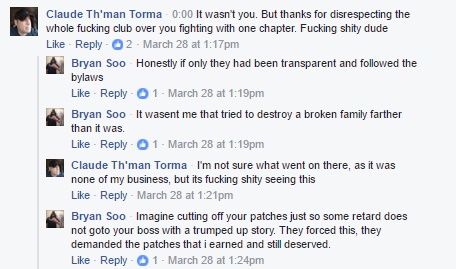 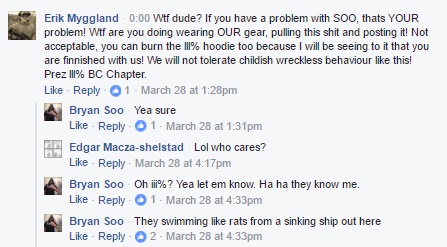 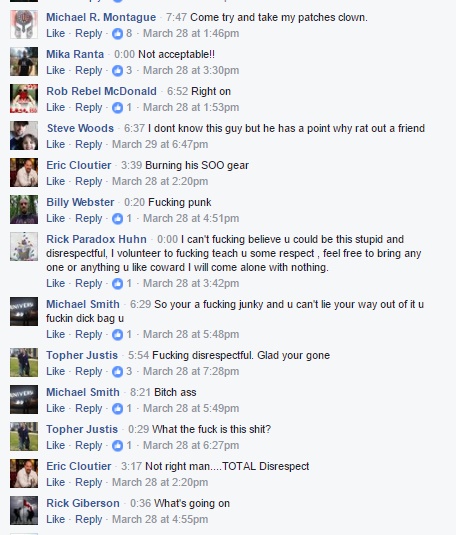 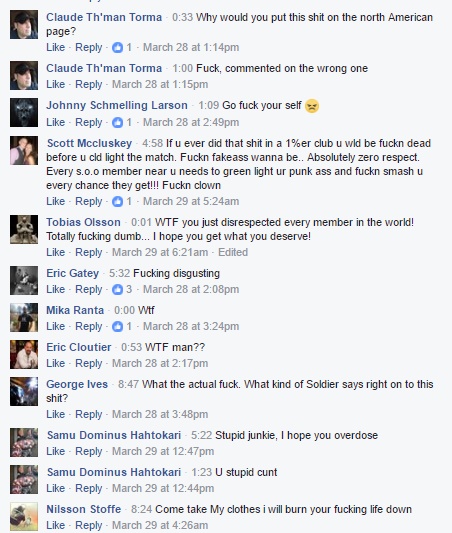 Not long after this exchange took place, then SoO National President Joel Angott became involved in the argument:

That resulted in this....


Another brief, though enlightening, exchange occurred in which Bryan was urged to go to the United States, ostensibly to fight because of his dishonoring of the SoO. The reason why the American SoO supporter couldn't go to Canada is both hilarious and pathetic: 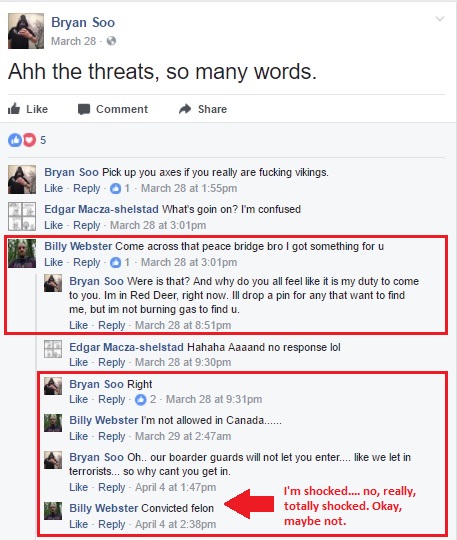 Bryan's actions didn't meet with universal condemnation. In fact some decided to emulate Bryan's defiance of the SoO: 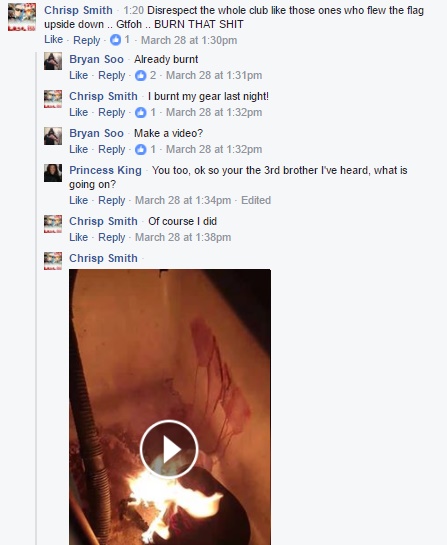 The cause of "Chrisp Smith's" agitation also appears to involve, at least in part, alleged criminal behavior: 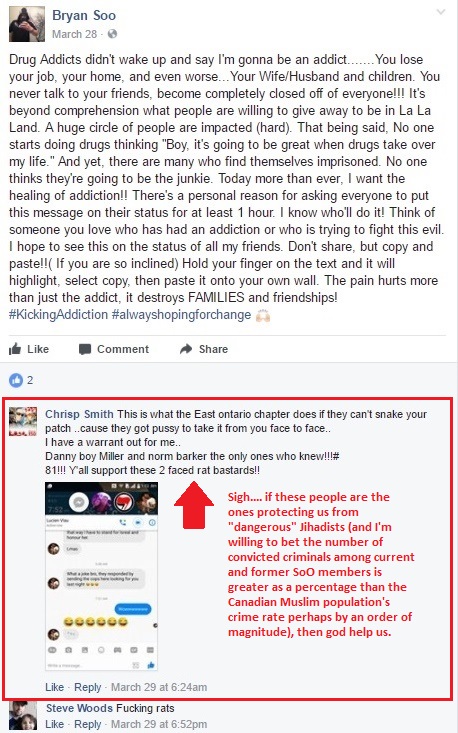 Now, all of this was in March. Since then many of those who are furious with Bryan "SOO" and his actions have also left the Soldiers of Odin.

Michael Montague, who had become the primary SoO spokesman after the Daniels coup, resigned from the gang due to reasons that included continued infighting.

Joel Angott, Canadian founder and former National President, was seemingly kicked to the curb by Bill Daniels as part of the break from Finland.

And we've already discussed former Ontario Chapter president Arran Taylor who, along with Mika Ranta and others, laments what had become of the Canadian SoO:

There is however a concern.

While no longer members of the SoO, many of the people mentioned have, as the Stewart Bell article points out, joined other organizations.

Our more observant readers will notice that Montague's profile photo and Bryan "SOO" hoodie have the III% symbols. They aren't the only current and/or former SoO members to gravitate towards that groups which given their rhetoric and behavior are, in the view of this writer, considerably more dangerous than the SoO.

There will be more on the III% movement in a future article.

Regarding Stewart Bell's article, there was a part that stated the SoO refused comment on the story:


Questions sent to the SOO Facebook pages went unanswered. “I’m not giving you a statement so you can twist it. Here’s where you can go and here’s how you can get there,” a spokesperson for the British Columbia affiliate said. 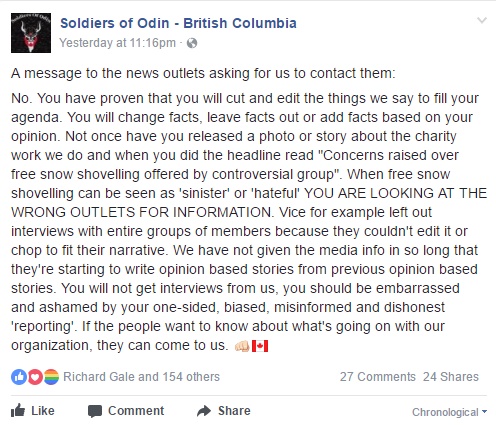 But it is of some interest that the exchange that resulted from this post calls into question whether the break from Mika Ranta and Finland was really as cut and dry as Daniels implied: 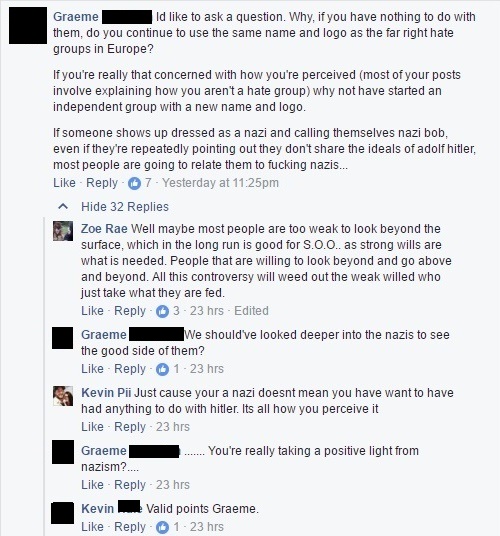 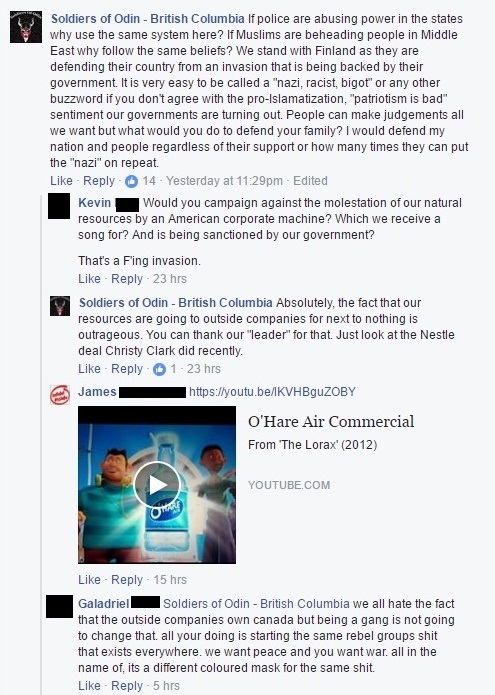 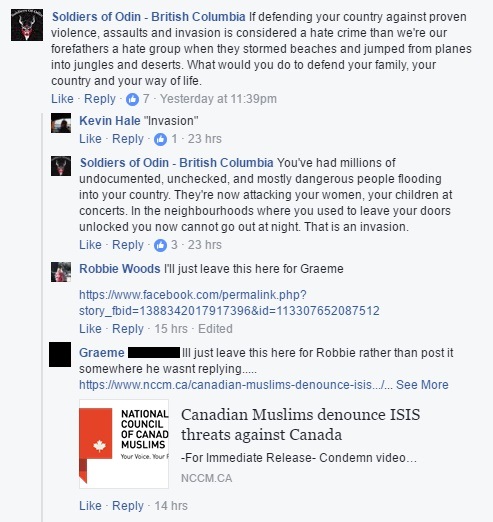 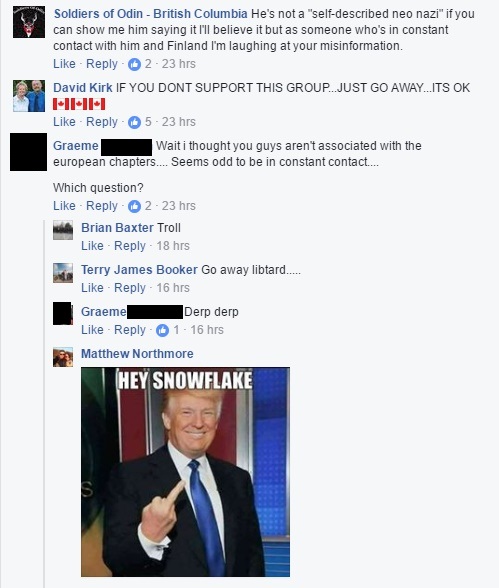 That because you can't just adopt the name of a pro white organization then make it here in Canada and cuck it. Nobody gives a shit about your group if your not pro white. So nobody on either the left or right here took them seriously. Cant have it both ways trying to be anti Islam and anti whatever else but pander and cuck to the left wing.

You know Robert Reitmeier's half sister is a Soldiers of Odin "prospect"??
Her name is Sorin Kaerys Mountain, after she changed it from "Tanisha"...

Actually, it's Sorin Kaerys Mountan. Well done with the research XD
I quit because it was more of a social club and my time is valuable, I wanted to attend charitable events and help the community, none of which was happening as much as it should. When an island chapter gets going with willingness to work I will likely rejoin.