Naval "Proud Boy" Members in Halifax: Slap On the Wrist?

It would seem that at least one "Proud Boy" isn't so proud anymore, or at least he isn't so willing to speak with the media. Tom of Community TV contacted Grant Gauchier (Did I get that name right Grant? You insisted that your name be correct last time) but was left with this as a response: 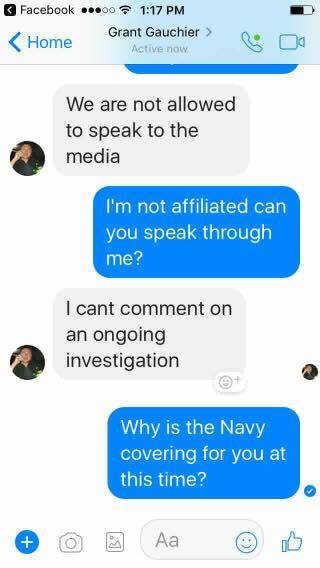 Today the military confirmed (and what ARC had already confirmed) that all five men who disrupted a Mi'kmaw memorial remembering MMIWG in Halifax are in fact members of the Canadian Armed Forces though has only confirmed that two are members of the Royal Canadian Navy:

HALIFAX -- The military says five men involved in a filmed confrontation at an Indigenous ceremony in Halifax are members of the Canadian Armed Forces, and any misconduct will be addressed.

National Defence spokesman Daniel LeBouthillier confirmed Tuesday that five Forces members were involved in the incident, at least two of whom belong to the Navy.

As such, ARC will confirm that at least 4 of the 5 are members of the Royal Canadian Navy and one is likely a member of the Army Reserves. One of our readers has provided the following information:


Commanders of the Canadian Army and Navy released a joint statement Tuesday saying that the chain of command "takes action" when a member's conduct is not in keeping with military code.

"The actions of a few do not reflect the Royal Canadian Navy and Canadian Army commitment to being inclusive and diverse organizations," Vice-Admiral Ron Lloyd and Lt.-Gen. Paul Wynnyk said in a Facebook post.

"Unfortunately, some of our sailors and soldiers have not ... made the necessary mind shift that leads to deep institutional change."

Well that is all well and good, but while Rear Admiral John Newton confirmed the five were members of the Canadian Armed Forces, he did so with the tone that they were mischievous scamps who carried things too far and disappointed their dad.

At this point the five have not had any formal disciplinary hearing, but it looked as if they would not be discharged. I may be wrong about that, but we'll see. Also, LeBouthillier's response to a question about whether First Nations would be consulted during the process -- they will consider it -- doesn't leave one with a great deal of confidence.

Now all five of the men have shut down or locked down their Facebooks so ARC was not able to get any other information, however Alheli Picazo managed to get some screen shots that indicate that at least some of the members also have interesting views not only about First Nations, but also Muslims, transgender persons, and rape.

Oh, and they seem not only to be "Proud Boys" bat a few are adherents of the alt-right: 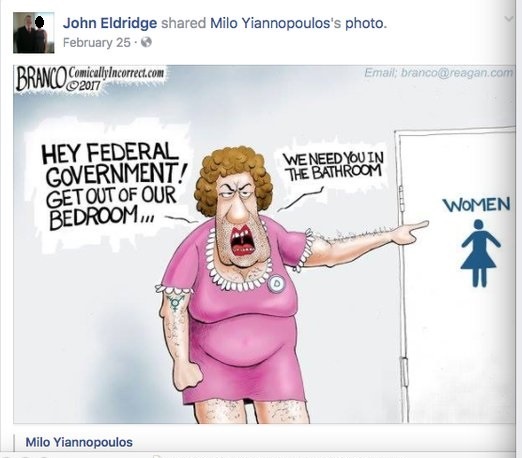 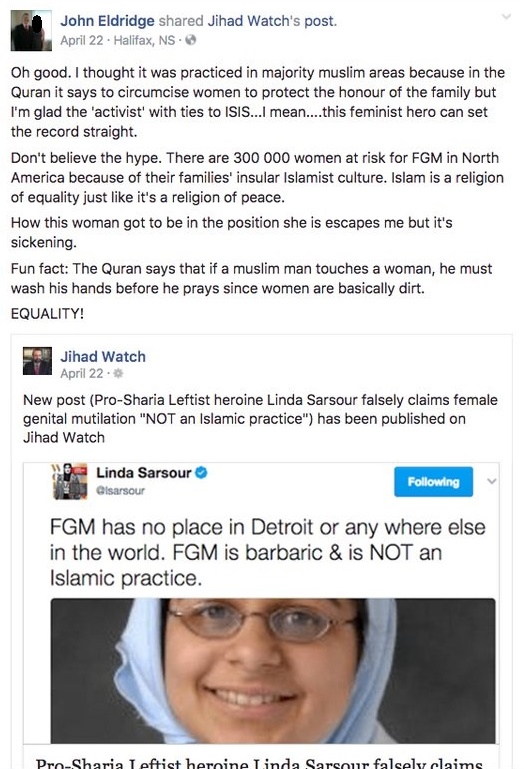 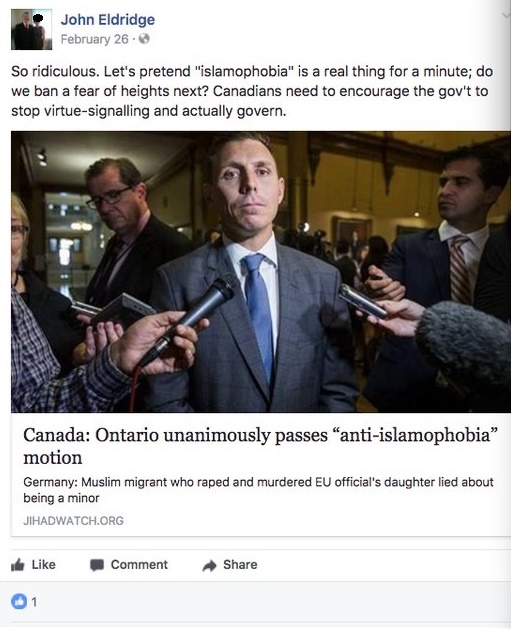 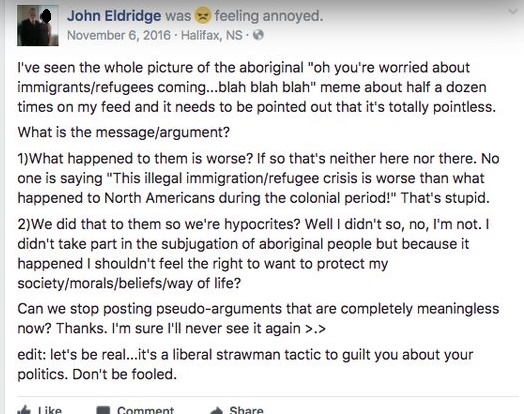 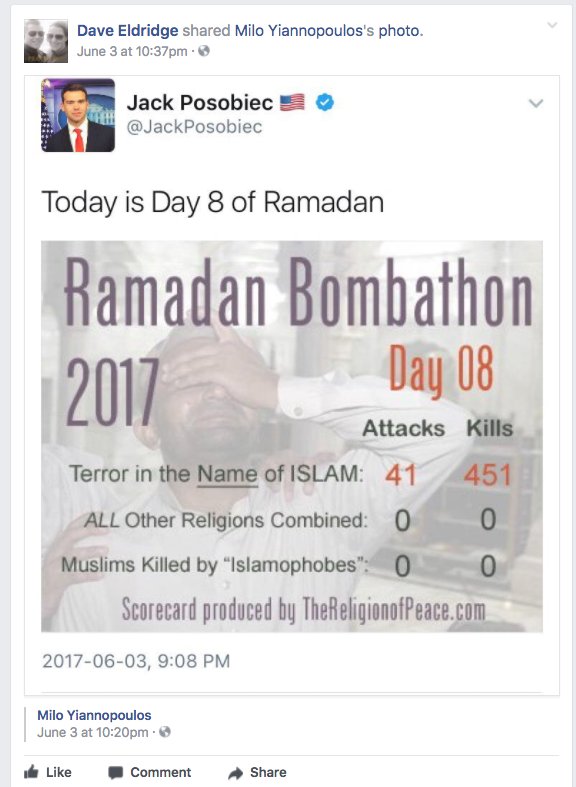 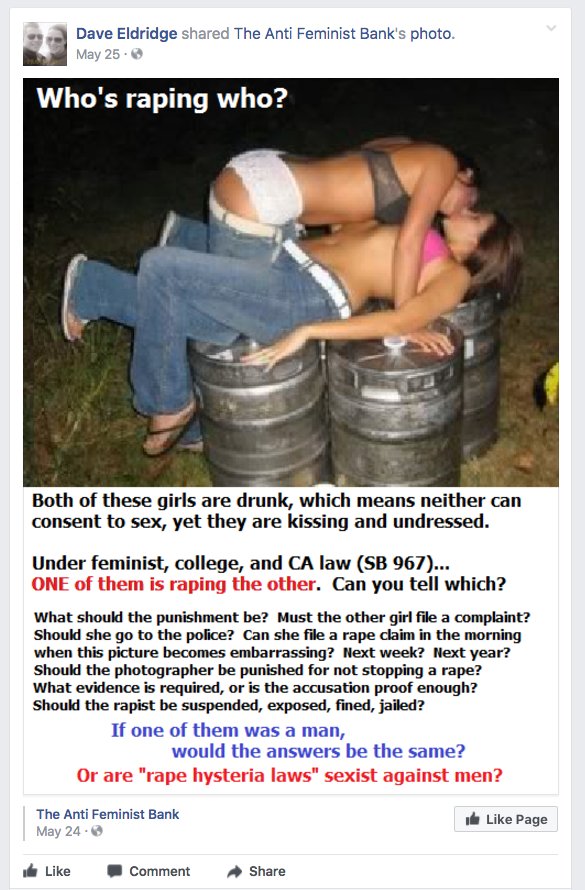 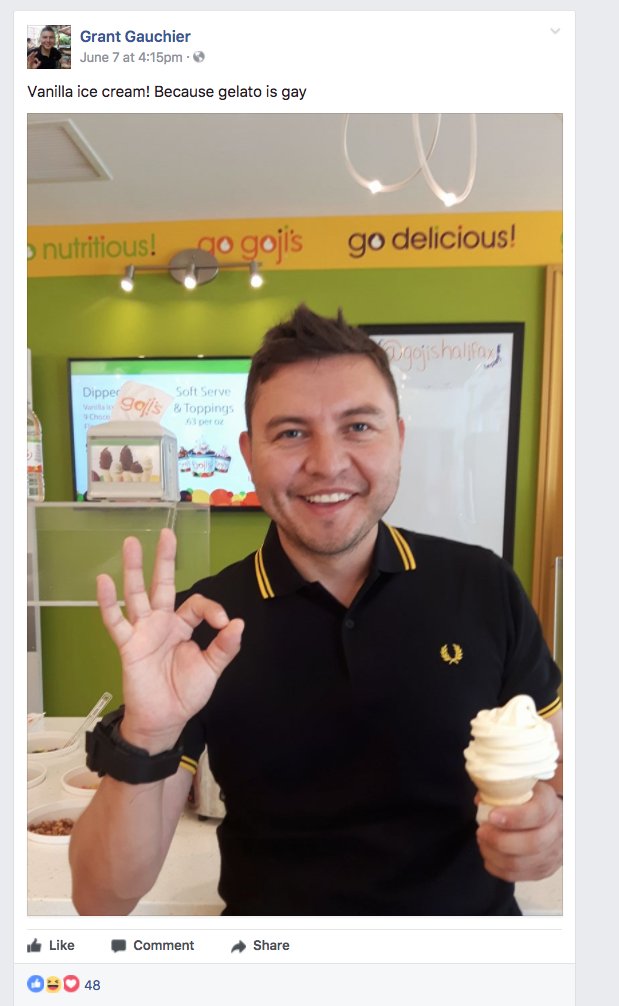 But hey, at least these five men have the support of III% Alberta, an anti-government militia: 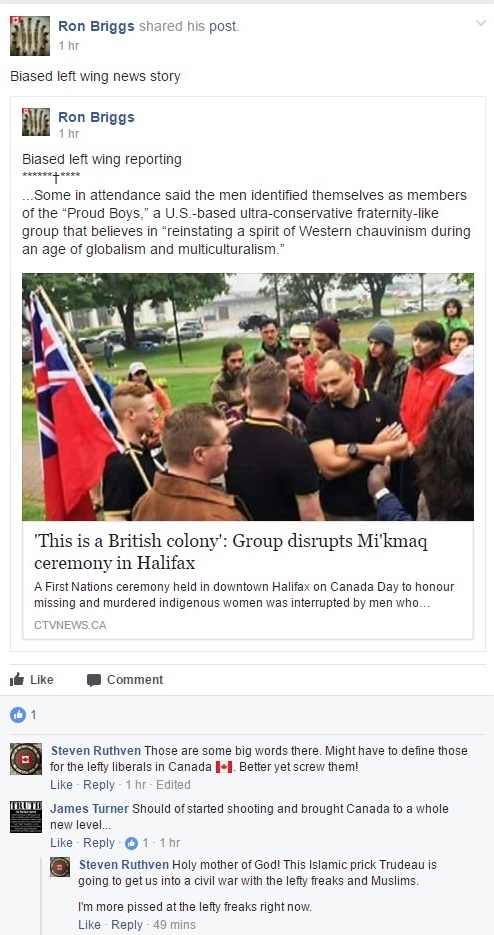 I prodded CBC News Halifax on Sunday night with your original article, and also the leading non-print news website website. Truth to tell, everyone was on a long weekend and haven't yet woken up, if I'm being charitable, and I'm not feeling that way. Very poor response.

And then the Admiral called the five in and gave them a principal's office telling off as if they were just naughty grade 10 kids.

Kinsella is also on the warpath, so that should help.

Apparently National Defence woke up on Tuesday evening. The Chief of Defence Staff General Vance seems to take the matter seriously, as does Sajjan.

Here's what I find interesting in the CBC report:

"Eldridge said in his Facebook message that the group had thought the event was an anti-Canada protest and left after learning that wasn't the case."

So these people "decided" what is acceptable protest, did they? To them and their blinkered minds, that is. Having serving armed forces members "deciding" such things is beyond their remit or purview in the first place, not that they're bright enough or clear-minded enough to understand that. They are not the tribunal for what is acceptable to the Canadian public at large. Because of that, I rather hope they get to see what is like to be unemployed and disgraced, where they can contemplate their stupidity at some length. As a fatalist, I should not be at all surprised to learn that they will not reform. Anyone dumb enough to do what they did is likely beyond societal redemption.

I don't think trying gather an internet Lynch mob is going to help, all this is doing to do is make the resent grow.

Let the military handle this.

Gyor....Sure, if by "handle" you mean they are dishonorably discharged then I agree. But if the military let's this go I think an internet lynch mob is what would be needed, no?