Devon Mannix Needs to Work on Geographical and Historical Knowledge

Devon Mannix, the 19 year old Alberta chapter head of the fringe Cultural Action Party and WCAI supprter, posts a lot on social media about protecting "old stock" Canadians and somehow getting rid of all the icky ethnics who live here as well, though he doesn't provide a clear plan on how that would actually occur; despite some of their families likely predating his own family's immigration history, he doesn't consider those of non-European heritage to be "real" Canadians. He also goes on about the "Muslim invasion" including a recent effort to promote the idea that there were Muslim no-go zones in Fort McMurray that even other Islamophobes had to call bs on.

Another common thread in his posts is that there is no such thing as a refugee. In his mind, anyone fleeing an active war zone should be classified as an economic migrant and thus denied entry into the country. And if he does even concede that maybe there is a conflict causing people to flee, when then those people are cowards for running and thus also not the kind of person who should be allowed into Canada.

However, Devon Mannix has acknowledged there is a class of people who are legitimate refugees whom Canada should throw open the doors to. And those refugees are white South Africans:

One might notice just a few inconsistencies.... you know, besides the reality that despite it's faults, South Africa is a democratic country where white South Africans are still economically more advantaged than black, Asian, or mixed ancestry citizens.

First, if those 18 - 35 year old men fleeing Syria are cowards for fleeing a war zone and that they should "take it back," then what about 18 - 35 year old South African males who are emigrating for, in most cases, economic reasons. Second, if the "Middle Eastern conflict" isn't any of our business, then why should we care about matters in South Africa?

Truth be told, Mannix isn't exactly known for his ideological consistency, but then in this case we also have the matter of his geographical and historical knowledge of the country: 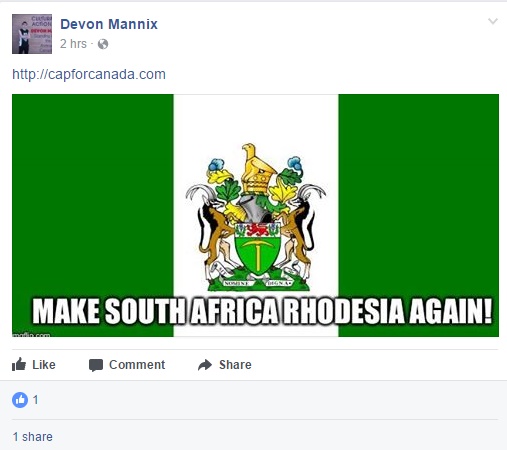 Devon. Sweetie. You are aware that South Africa was never called Rhodesia, right? That would be Zimbabwe.

And the apartheid-era flag of South Africa wasn't the one you attempted to turn into a meme. It's this rag: 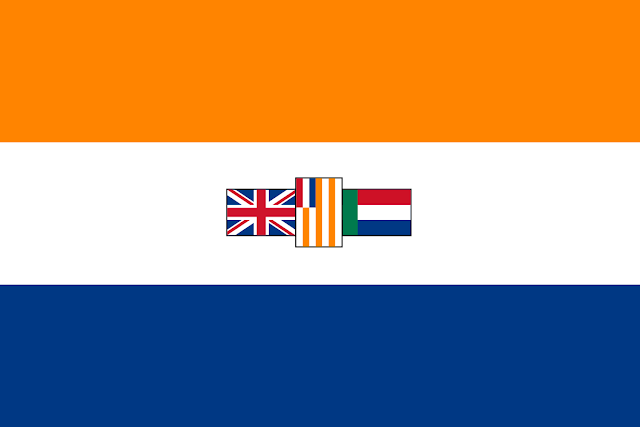 His historical understands of South Africa, such as they are, continues in another discussion:

Okay, at least the guy who was relieved that Nelson Mandela died in prison was corrected, but then Mannix also posted this:

Does Mannix think that Mandela was recently honored by the Canadian government?

Mandela was given honorary Canadian citizenship by Parliament in 2001 dude. Trudeau wasn't evan an MP until 2008.

But yeah, people who believe Nelson Mandela to be a hero are the idiots.