Yesterday I alluded to an event being planned by the Worldwide Coalition Against Islam (WCAI) and others that would not be discussed until after the event took place. I and others in the know wanted to be sure to (a) make certain the school and the police were aware of the plans and (b) we didn't give them any undue attention.

Yeah, a fight took place at a high school last week, much like fights have been happening at Canadian high schools for decades. Had this been a regular fight, our friends with the WCAI wouldn't have given it a second thought I'm sure. However, one fact stood out which resulted in a school yard spat being turned into an act of potential terrorism against "Canadian" kids:


School officials acknowledge that some of the students involved in the altercation were Syrian, but are refuting social media comments claiming the discipline for those students was not the same as for others.

Yeah, by this point you all know what is coming: 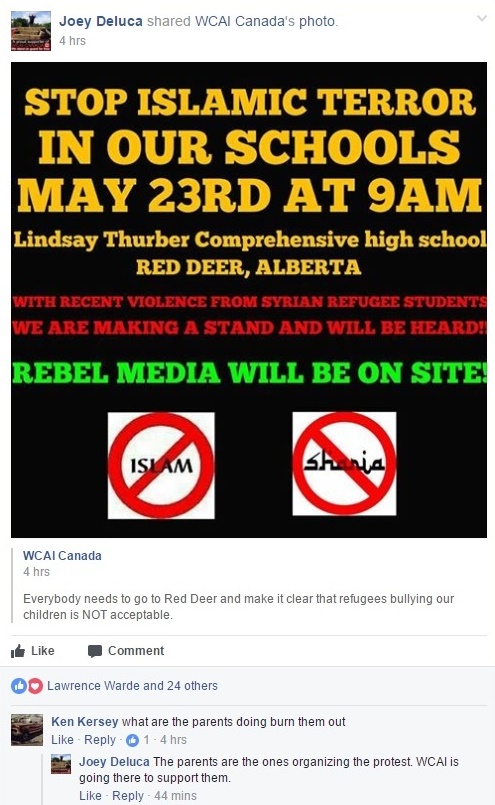 De Luca and his confederates planned a protest for today at Lindsay Thurber High School in Red Deer, Alberta based on a claim that Syrian students were beating up Canadian kids and were not being punished because those Syrian students were, "acting within their faith" and that they needed to be tolerated. A rational person would question this claim, particularly when the school stated that all involved were punished.

But then we aren't talking about rational people here:


Honestly though, who should parents at this high school be more concerned about? The immigrant kids or a man who has been convicted of drug trafficking and assault causing bodily harm?

Some of the comments left while De Luca conducted his live video are as follows: 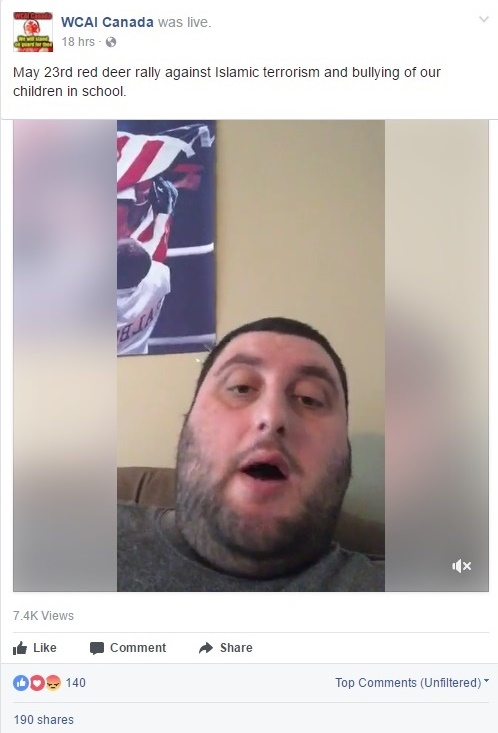 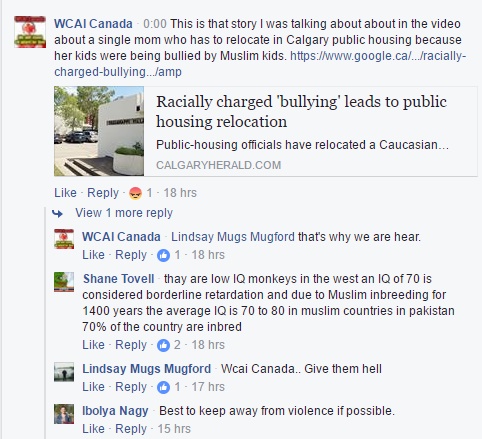 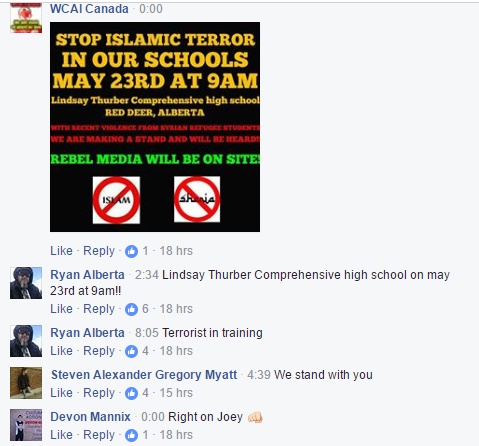 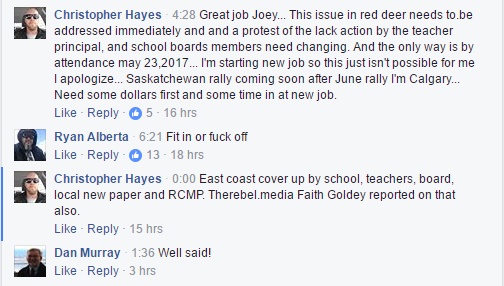 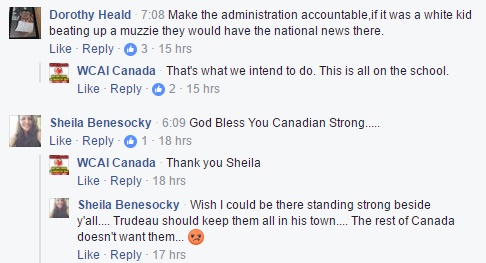 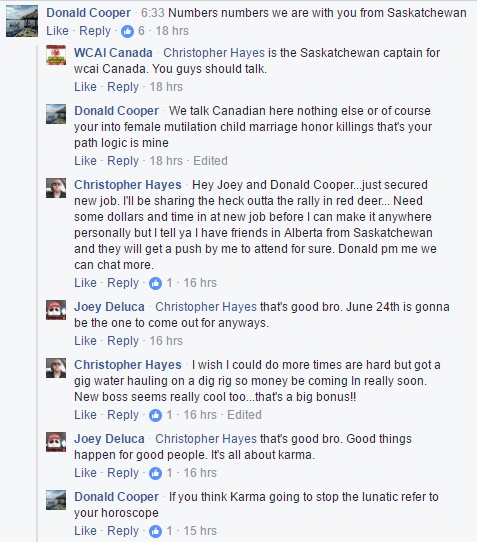 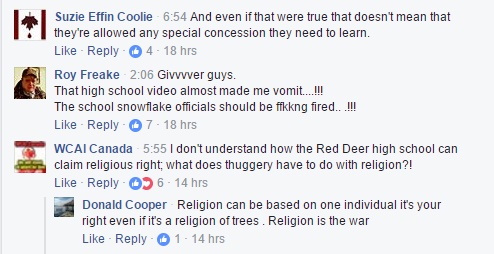 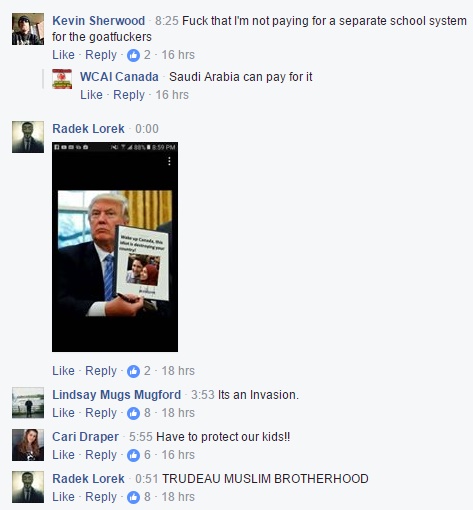 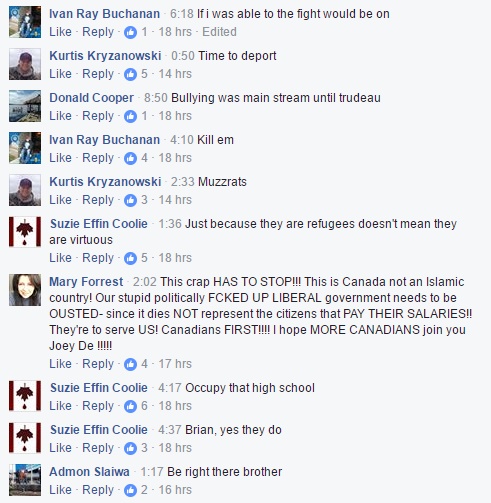 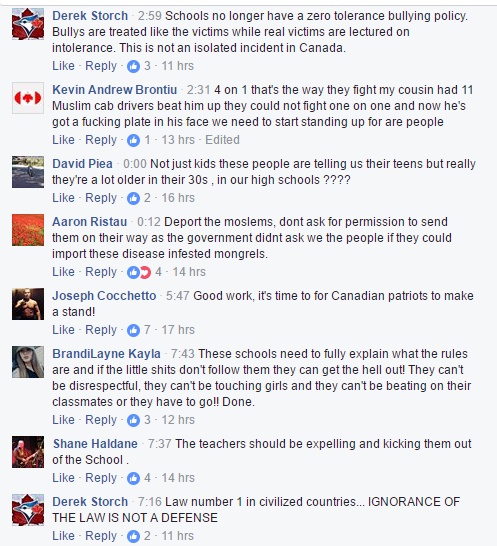 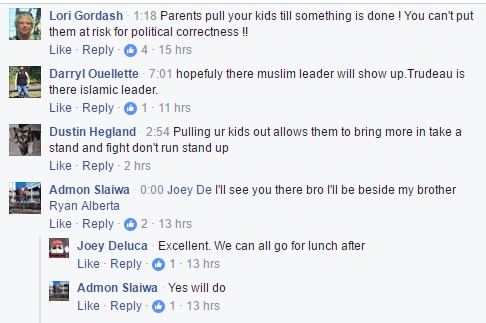 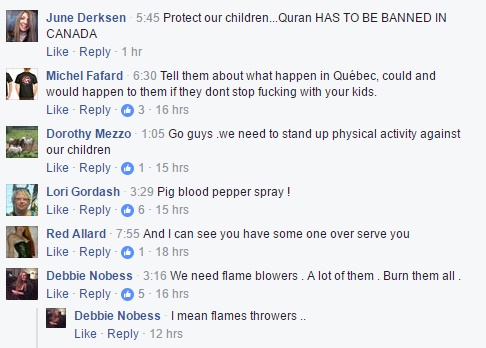 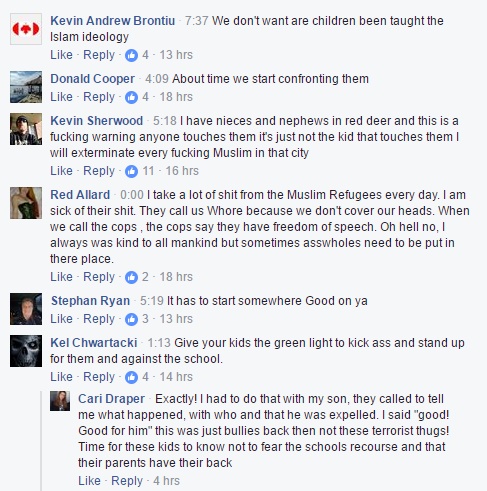 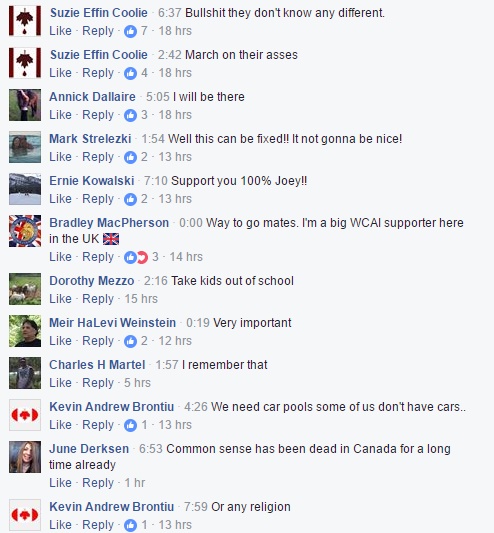 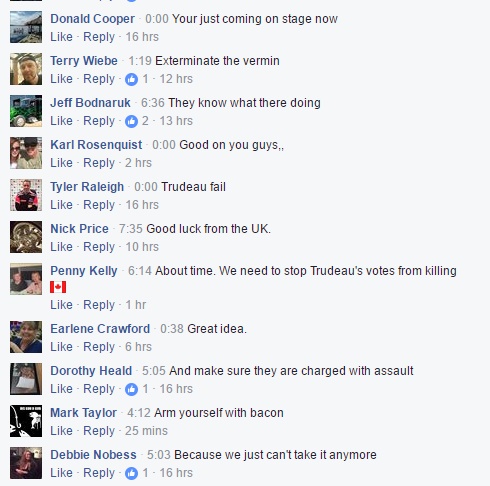 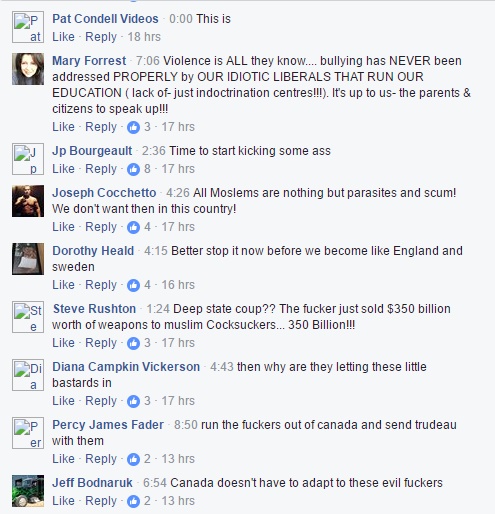 Other posts were equally as ugly: 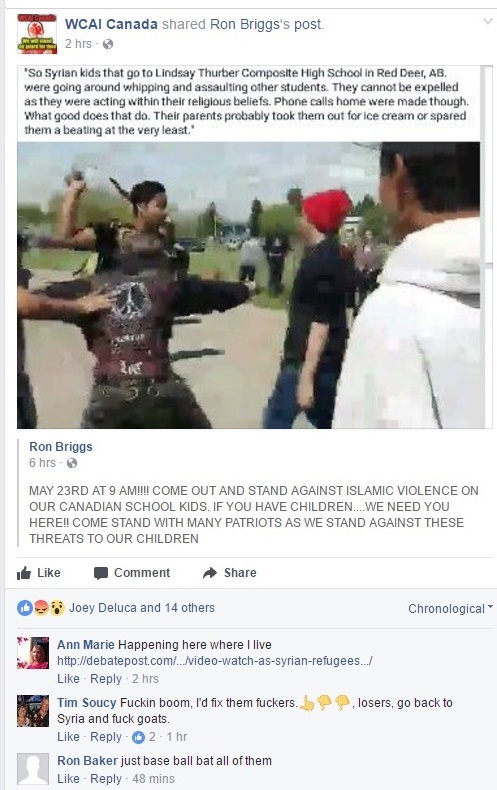 I would just like to note to the readers that the children who are being referred to as parasites, "goat fuckers" and having threats to beat and kill them are in Grade 9.

Okay, shall we continue? 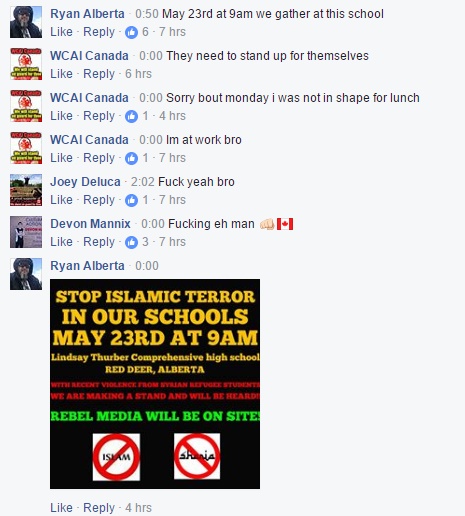 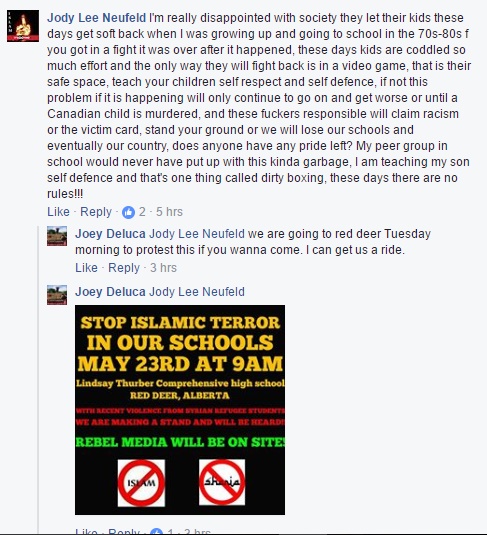 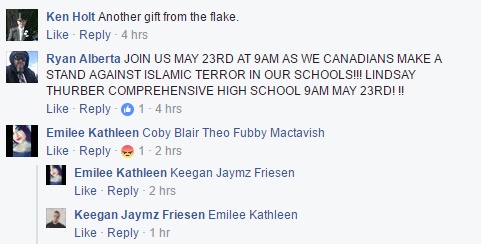 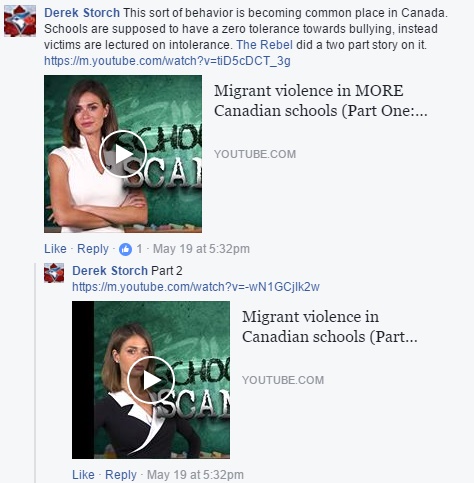 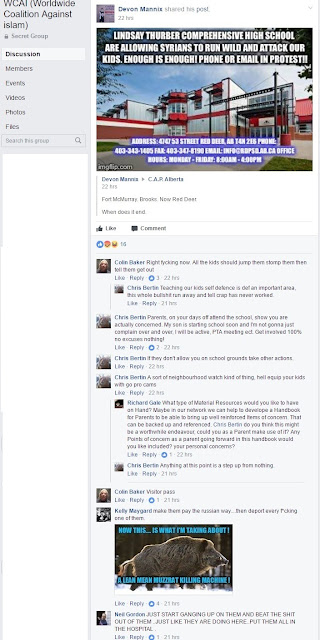 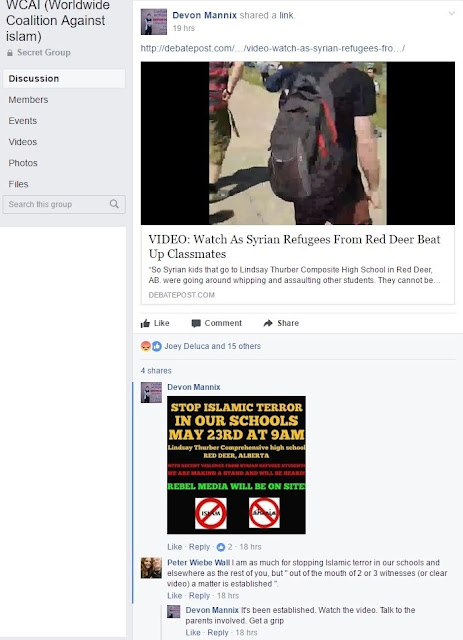 Ryan Dean of the Canadian Combat Coalition was also itching for a fight: 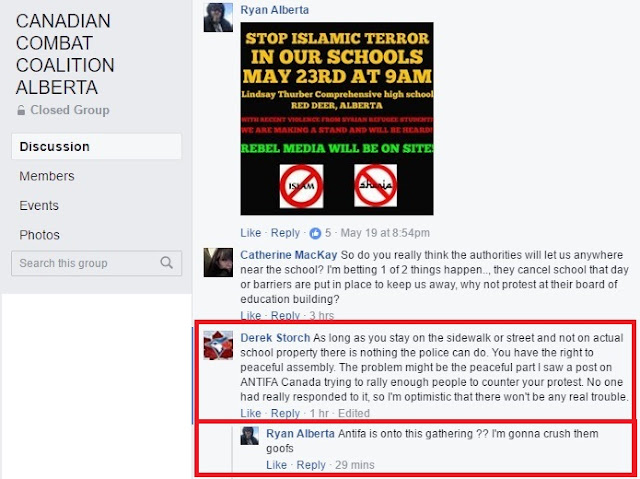 Now, as much as I would have liked to believe that De Luca, Dean, Garvey, and others who jumped on the anti-refugee bandwagon would tire themselves out online, many did make the trip to Red Deer:

RCMP officers stood guard outside a high school in Red Deer, Alta., Tuesday morning as more than 40 demonstrators marched outside the grounds as part of an anti-immigration protest.

Stephen Garvey, a member of the anti-immigration group, the Worldwide Coalition Against Islam, said the protest is intended to raise awareness about the need to protect "Canadian culture" in Canadian schools. Garvey is also leader of the National Advancement Party of Canada, a federally registered political party.

"We welcome people coming to our country, but they have to integrate into our society. It's not about accommodating their values....

Well then. Stephen Garvey has changed the goal posts. As the school has punished all who were involved in the fight and claims the Syrian students were not are unfounded, now the reason for the protest is to "protect Canadian culture."

This won't be the last time they change the goal posts.

In a rather valiant, though perhaps naive and certainly futile effort, the school administration tried to reason with the anti-Muslim protesters:


Officials with Red Deer Public Schools, in a statement, said that, “We want to be very clear that all students involved in the situation have been dealt with in the same manner receiving the same consequences for the roles they played in the altercation,” the statement read.

Valiant, naive, and ultimately futile because no matter what the school administration could tell the WCAI, CCC, National Advancement Party, Soldiers of Odin, and III% militia types who came out, they were never going to believe anything other than the "truth" they had constructed for themselves:

And besides, they could always move the goal posts again:


But those comments didn’t calm protesters’ fears and concerns about safety at the school. Following a press conference Tuesday, some school officials met with protesters outside of the school.

“We are not aware of those allegations - certainly if we were, we would take care of them,” said Stu Henry, superintendent of Red Deer Public Schools. “We are certainly willing to look into anything that the students bring forward.”

Ah, I was wondering how long it would take for these cretins to get to the old, "we need to protect the honor and virtue of our [white] women" argument that was (and still used) to justify racism and which resulted in the lynching of African-American men throughout the American south and elsewhere:


In her book White Women, Rape, and the Power of Race in Virginia, 1900-1960, Lindquist-Dorr explained the rape myth that dominated white, Southern culture. “The myth insisted that black men were driven to assault white women and that, as a deterrent, ‘black beast rapists’ should pay with their lives,” she wrote.

The trope was a particularly effective one because of the way white female sexuality has historically been viewed and positioned. “Sexual access to women is a trophy of power,” Lindquist-Dorr told HuffPost. “White women embodied virtue and morality, they signified whiteness and white superiority, so sexual access to white women was possessing the ultimate privilege that white men held. It [also] makes women trophies to be traded among men.”

Point of fact, I and others who have been keeping tabs on these people since May 19 don't actually believe that De Luca etal have spoken to any students (there is evidence that they communicated with a father of one of the boys involved in the incident, but given that person and his wife had anti-Muslim and anti-refugee posts on Facebook predating this event by several months at least, we have to suspect their story might contain a tinge of bias). No, this is just one of the laundry list of stereotypes that the WCAI, CCC, and their supporters will use to justify terrorizing the students and staff of an Alberta high school:


Grade 11 student Thomas Gower said the protests are unnecessary and have made students feel unsafe.

He stood nearby holding a sign which read, "No more hate, No more fear, Refugees are welcome here."

"There was never really a big issue until this incident. Everybody kept to themselves really," said Gower. "The spreading of misinformation leads to things like this. You shouldn't have to worry about things like this when we're supposed to be a welcoming and accepting school....."I encourage you to make sure that your kids come to school ... so that their education is not disrupted by the fear-mongering of people that know nothing about us," Lower said.

"Many of our refugee and immigrant students have indicated that they are afraid to come to school," he added. "This makes me ill."

But then making children fearful to go to school was De Luca's and the others' aim.

Later, after the Islamophobic jackasses had left, the RCMP and students, non-Syrian and Syrian alike, played an impromptu game of soccer:


As the protest wrapped up Syrian, non-Syrian students & #RCMP joined in for an impromptu soccer game 'This is what our school is all about' pic.twitter.com/4Fh6TrqLb7
— Andrea Huncar CBC (@andreahuncar) May 23, 2017


In the meantime, some of the protesters returned home patting themselves on their backs for a job well done: 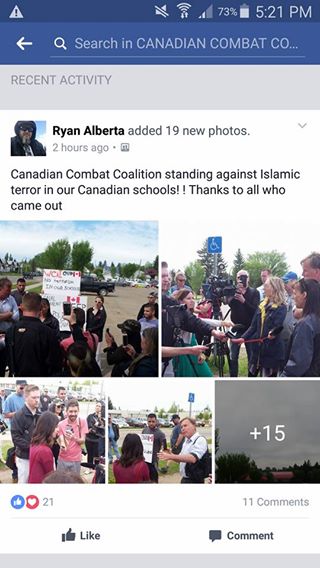 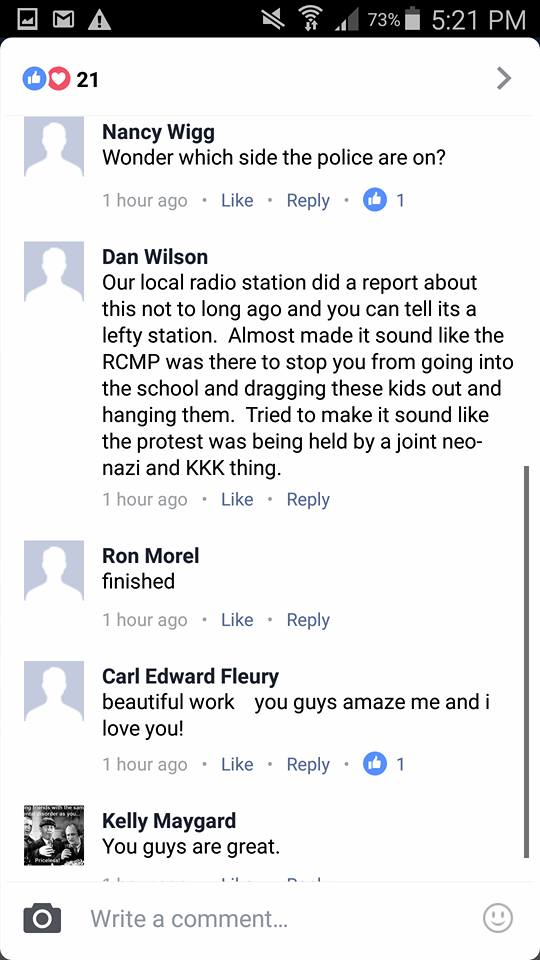 And as for the RCMP and the soccer game.... 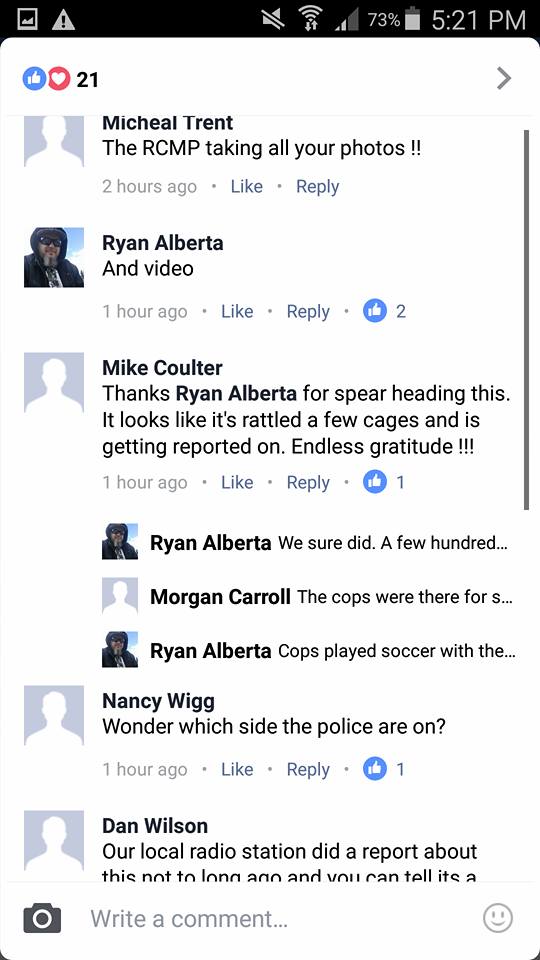 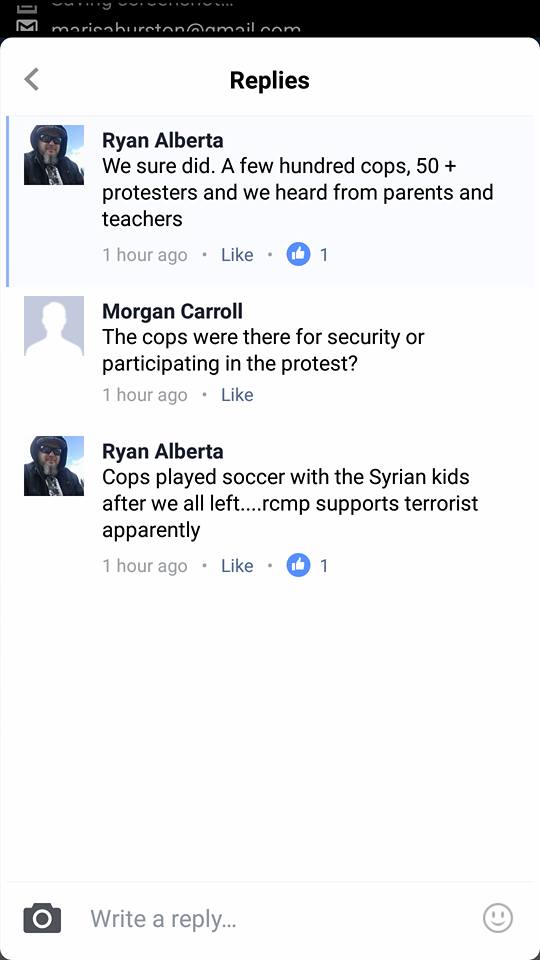