I admit that I haven't been following the various reactionary Yellow Vest protests in every community where they are occurring unless something jumps out at me (like the participation of former Aryan Guard member and supporter Tom Trenerry and Dara Graham respectively). So on January 5 when the Yellow Vesters arrived at Churchill Square and the Edmonton Legislature for their weekly whine, I didn't pay all that much attention other than to note that their numbers had declined.

Seems I missed something rather significant as the individuals counter protesting observed and have kindly shared with ARC. Seems that Ryan Dean is continuing to be a glorious dumpster fire:


On January 5th, there were two rallies planned for Edmonton. The first was at the Legislature and the second was at Sir Winston Churchill Square. A few days before, we became aware that Ryan Dean (Odin's Heathens/Canadian Infidels/III%/PATRIOT PRIDE CANADA WIDE) was planning a counter-protest for the Churchill Square event because of an apparent issue with Stephen Garvey and the National Citizens Alliance (NCA). 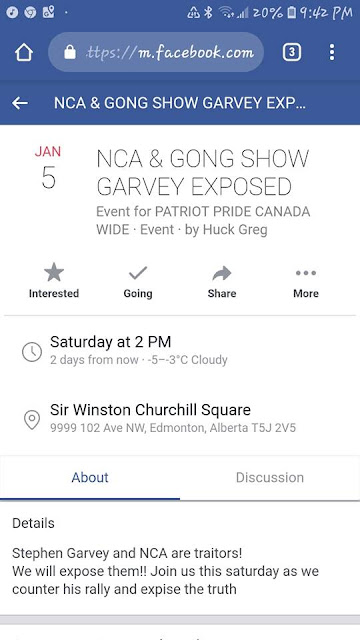 We sent a small fraction of our group to scope out the Legislature rally because we had decided to focus our organizing on counter-protesting the Churchill Square rally. Some stayed a safe distance back while another group of us tried to get a bit closer to hear more clearly what was being said and to get a sense of the size of the crowd. We were immediately confronted by someone from the rally who greeted us with homophobia, misogyny, and a question about a permit. When the cops came, he claimed we were invading his space. 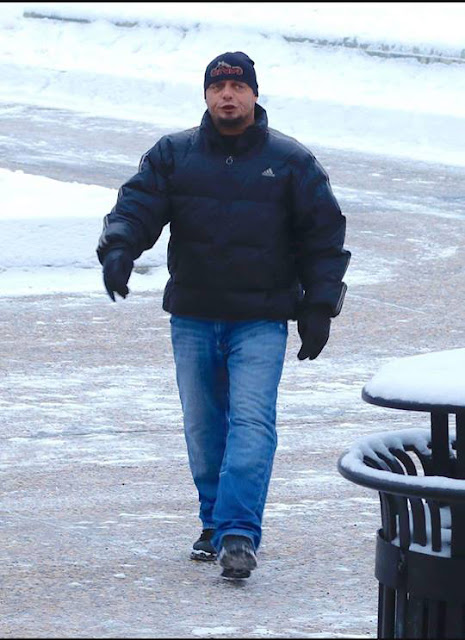 We didn't make it much further before being met with a police line and a line of Nouns of Odin [NOTE: "Nouns of Odin" is a term I'm definitely using this in the future!]. There was probably a dozen or so rally attendees who stopped paying attention to the speeches and focused their attention on us. Three yellow vests approached us from behind, holding up anti-UN and pro-pipeline signs. When the cops told them they needed to approach the rally from the other side, the approaching yellow vests became annoyed.

We stuck around for a few more minutes before deciding to leave and organize for the Churchill Square event. The Nouns of Odin/Canadian Infidels quickly declared this a victory over Antifa.

Upon arriving at Churchill Square, we were surprised at how few people were there. Stephen Garvey, someone in a yellow vest, and a handful of cops. 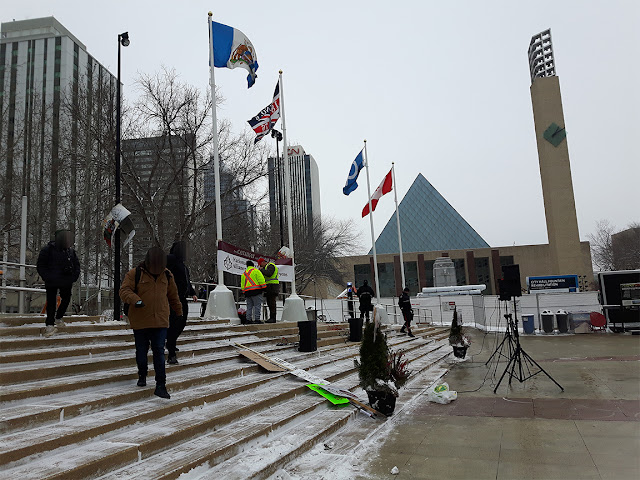 A few more yellow vests and even more cops showed up, but the event seemed to be running very late. 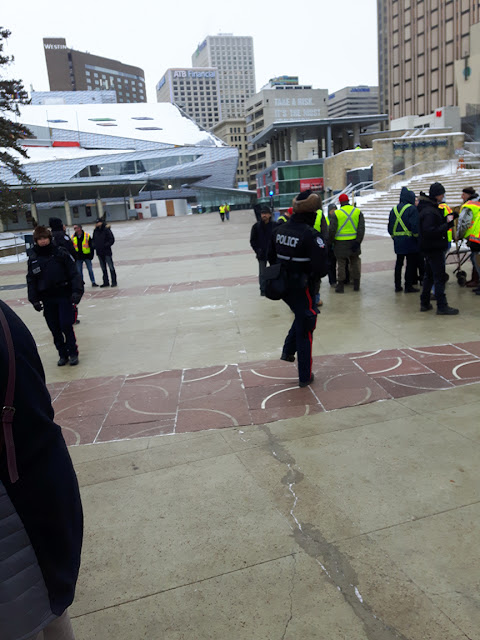 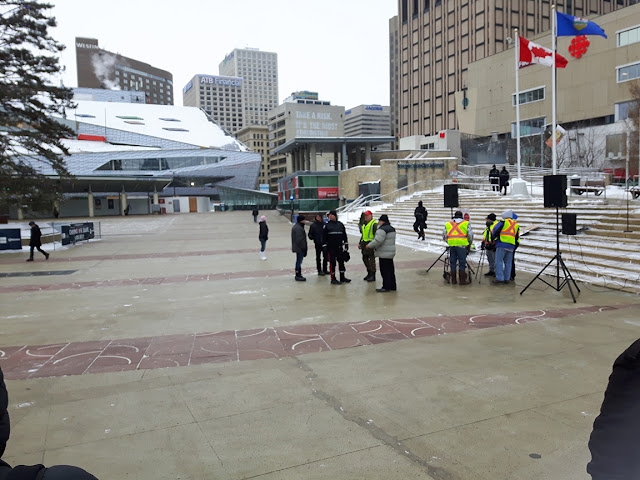 Our numbers were greater and the decision was made to block the Square's Happy Wall. Garvey and Friends had changed the message on the wall to read "Broke No Jobs". While this is a fair point, it was being said insincerely by fascists for the sake of whipping their yellow vest fodder into a frenzy. The message on the wall was changed to "No Hate". 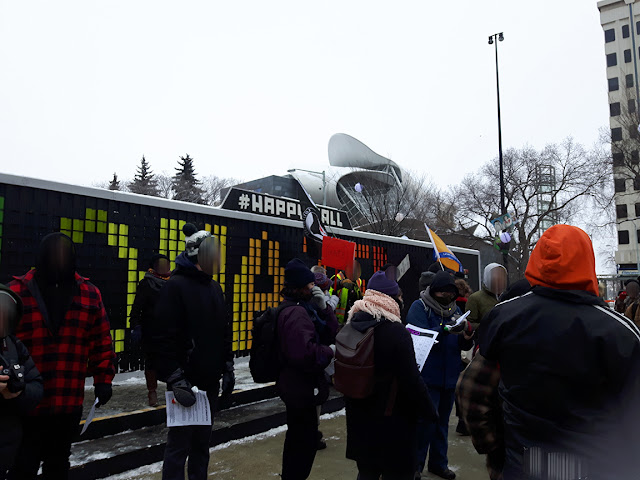 We also decided to take a different approach for this counter-protest. Someone made bingo cards containing predicted talking points and conspiracy theories. Instead of trying to drown out Stephen Garvey and the liberal cast of people he invited to speak, we let them talk so that we could hear their points in order to mark our bingo cards. We made noise too, of course, but it was much less constant than past counter-protests.

Garvey engaged in some theatrics. He produced a plunger and suggested that everyone needs to become a plumber in 2019 because Canada has become a clogged toilet. He repeated the same points many times and we eventually yelled at him to wrap it up and move along because we still had some unmarked spots on our cards.

A man was invited to the podium to speak. He spoke to the counter-protest and told us the communists were not going to protect LGBTQ rights. He also bragged about how many of his fellow United Association of Plumbers and Pipefitters members (Local 488) he was able to bring out for the yellow vest side. He then said that the movement had become contaminated and that he could no longer take part. The man speaking then walked off with the Nouns of Odin.


This, it turns out, was the counter-protest orchestrated by Ryan Dean. Reading the notifications on the event page reveals the problems Dean has with Garvey: 1) Garvey thinks Canada should accept more Syrian refugees; 2) Garvey has an interest in the Muslim Brotherhood which was somehow shown by him inviting a Muslim Student Association to an anti-Islam rally; and 3) the NCA has ties to a neo-Nazi. This is especially interesting since the Soldiers of Odin was founded by a neo-Nazi and the now defunct/renamed Edmonton branch has close ties to C3 in Edmonton, who Dean has called cop callers and snitches. 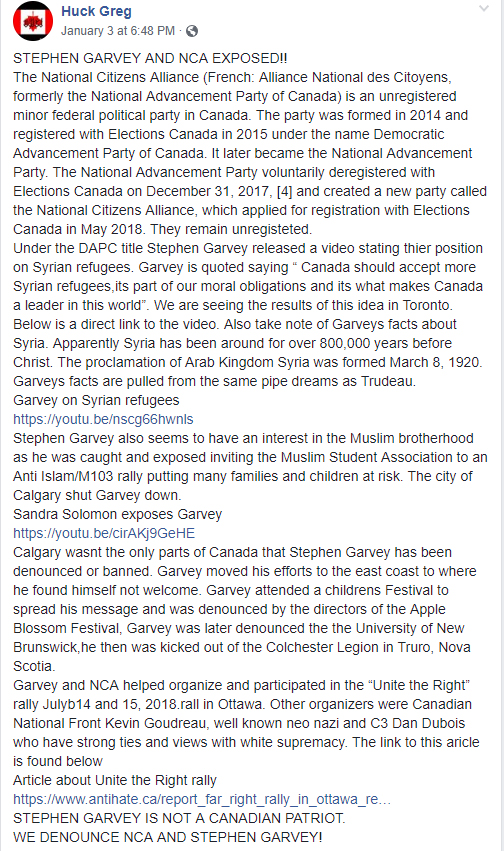 In a post on PATRIOT PRIDE CANADA WIDE, we can see that Dean also has a problem with Garvey being a politician. 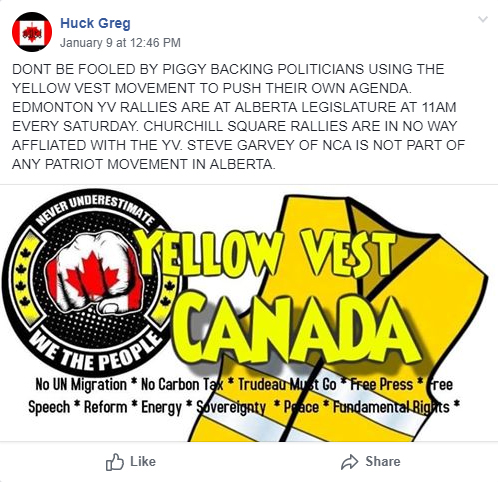 I can't say for certain what we witnessed when the yellow vests splintered at Churchill Square, but it seems to be two neo-Nazis fighting over who will get to use the yellow vest protestors as resources to bolster their numbers.

A reminder that "Huck Greg" (or "Greg Huck") is one of Ryan Dean's (convicted on domestic assault charges) more recent pseudonyms:


None of this is entirely surprising as racists are often also misanthropes in general who can't even stand each other.

We'll see where all this leads to. If past is prologue, it will probably result in further fracturing amongst the already fractured groups which will further result in more (but smaller) groups that, in turn, will also fracture.

And these people believe they are leaders of men.
Posted by Nosferatu200 at 13:57

The lumbering oaf giving grief is/was 111% now SOO member Mike Stack from Whitehorse. Claims to be a EMT, suspect "was". Zero confidence on the last name.

That is hilarious seeing Ryan sitting at the table with his "crew". Begs the question, crew of what? Was he offering free drinks if they would sit with him?

The real question in looking at those pictures is where is William?? Those two were joined at the hip,but in a manly way of course, nothing wrong with that! I hope their man love has not run its course.

He does travel from Whitehorse to Edmonton for protests.