While ARC has been critical of the mainstream media in the past for not looking deeply enough at the ideology of the far right, it has been doing a better job of late. One journalist who I've found has been consistently good though is Stewart Bell who wrote the following concerning the reactionary Yellow Vest protesters and their calls to murder politicians, particularly Prime Minister Trudeau:


It is clear that there is a toxic hatred of the political left, immigrants, refugees, FNIM, Quebecois, Muslims, Jews, people of color, homosexuals, and other groups based on a mountain of evidence gathered here and by such groups as Yellow Vests Exposed. We've also witnessed how groups such as the Soldiers/Wolves of Odin, Northern Guard, Proud Boys, and other groups as well as individuals profiled on this blog -- John Marleau, Dara Graham, Thomas Trenerry, Paul Fromm, and Joey Deluca to name a few -- are attracted to this toxicity and in many cases are using the reactionary Yellow Vests protests to promote their own bigotry. 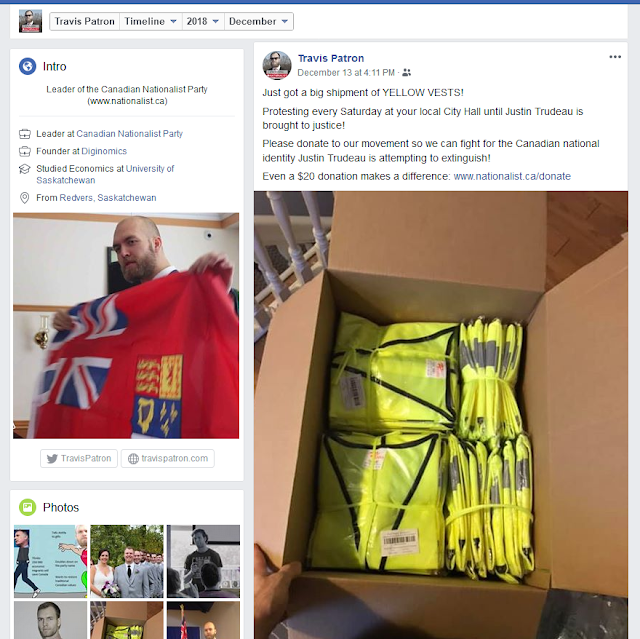 I've written about Travist Patron and his Canadian Nationalist Party in the past. Much like the Islamic Party of Ontario that the right-wing is currently in a panic about, the CNP is so fringe I'm not sure that they will manage to even get the necessary signatures to become a registered political party, though this isn't to say they don't have support on the far right: 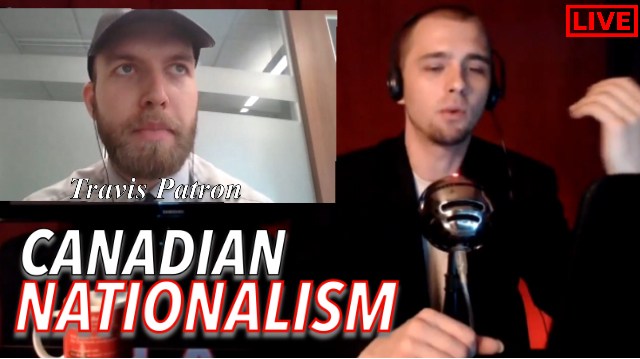 Still, they are a rather pathetic bunch who have spent a great deal of time desperately trying to be relevant:

People who have actually looked at the platform, such that it is, of the CNP view it for the joke that it is: 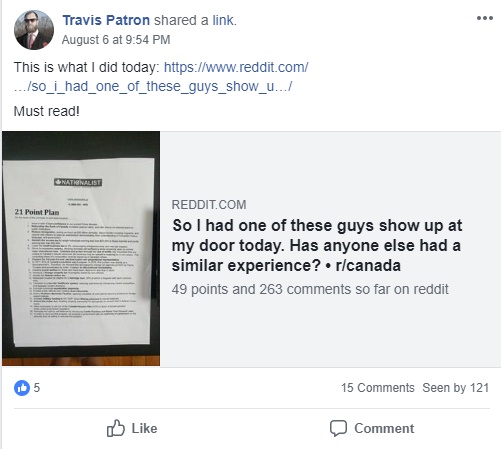 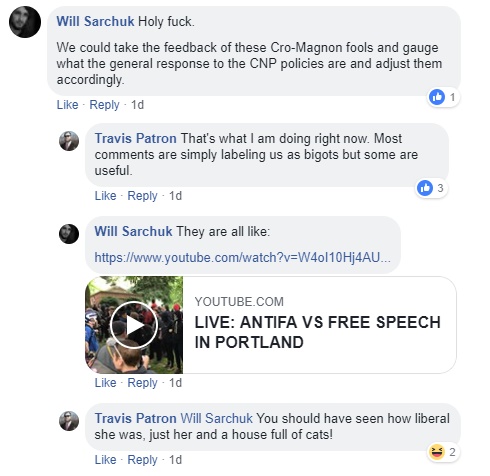 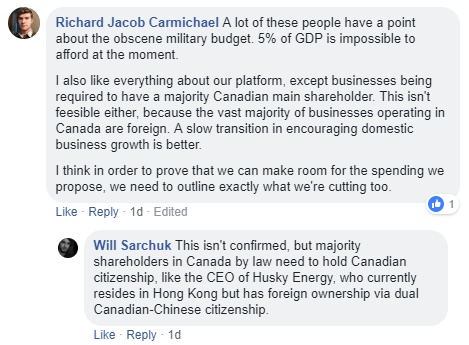 When he has attempted to hold meetings, they have been failures. They have either been cancelled such as this planned Toronto event that never happened.... 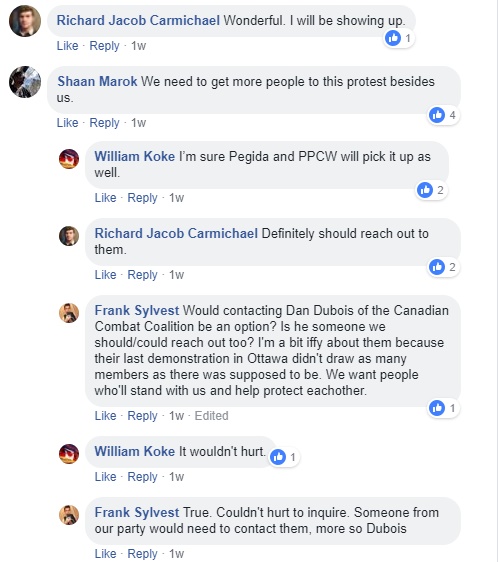 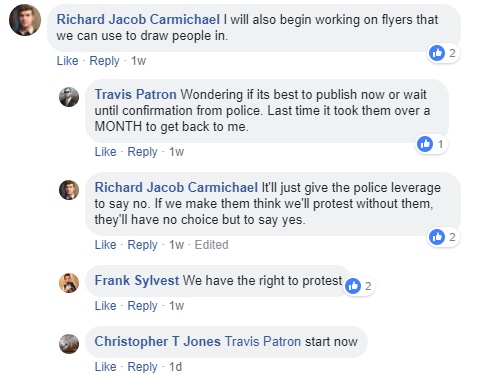 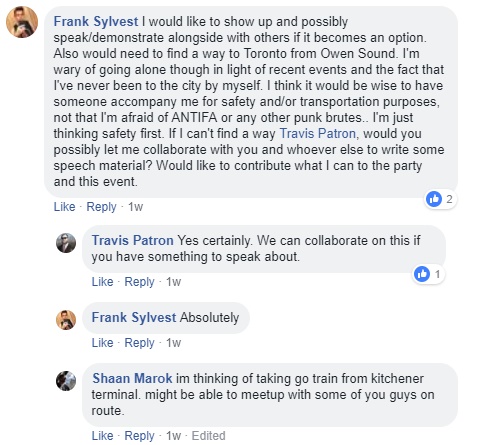 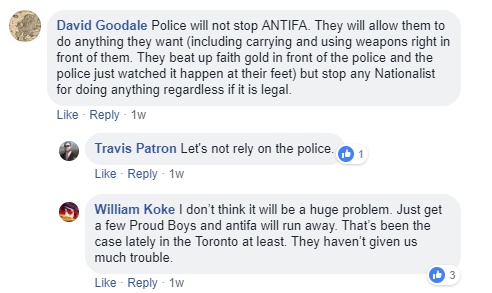 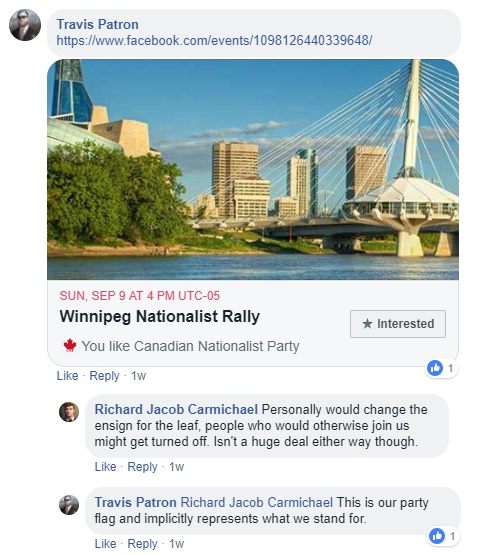 ..... or had very few people bother to show an interest: 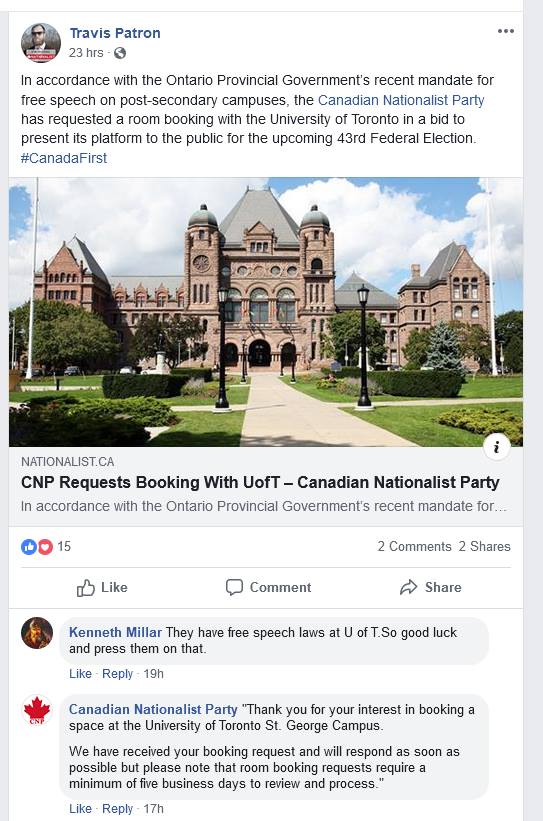 Like the Islamic Party of Ontario, there is absolutely no danger of the Canadian Nationalist Party achieving political power. Also like the Islamic Party of Ontario however, it is worth keeping an eye on Travis Patron's vanity project since the rhetoric coming from himself, his "party", and his supporters could pose a danger to individuals and vulnerable groups influenced by his extremism.

Is Travis Patron an extremist? Well, one has to ask one's self why a person who wishes to serve in government is so secretive about his "party's" real views and membership: 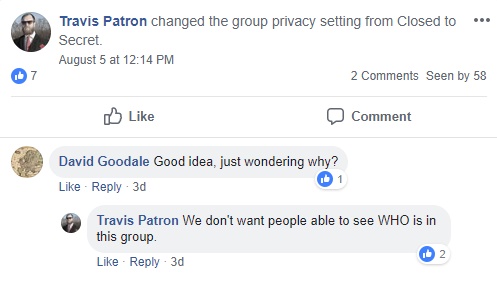 Yeah.... you sort of failed there Travis.

For example, Patron et al have some pretty regressive views of the LGBTQ community that he is considering enacting: 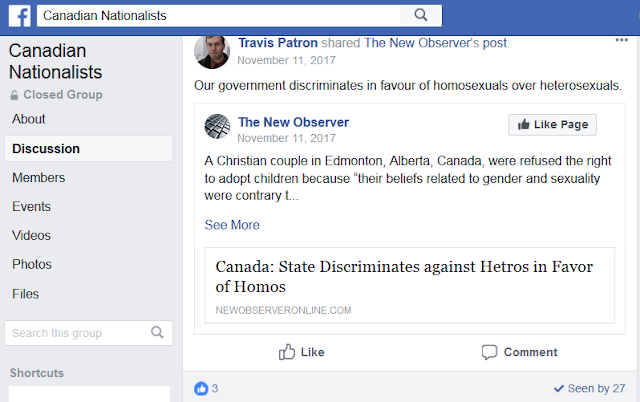 Then there's the more overt racism: 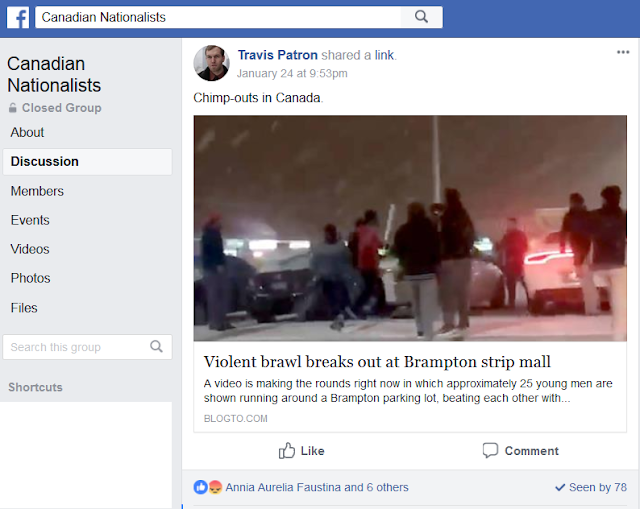 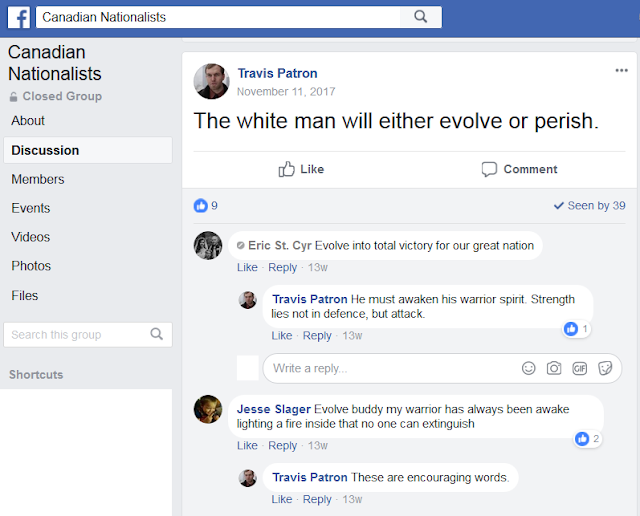 
And finally a heaping scoop of Holocaust denial and antisemitism: 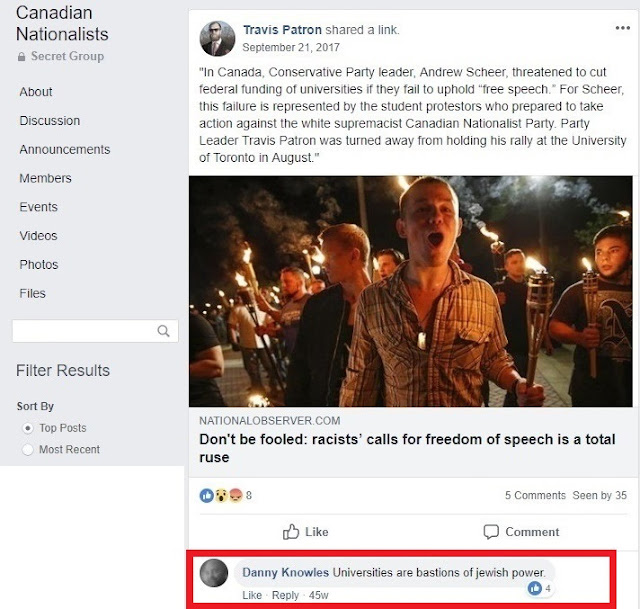 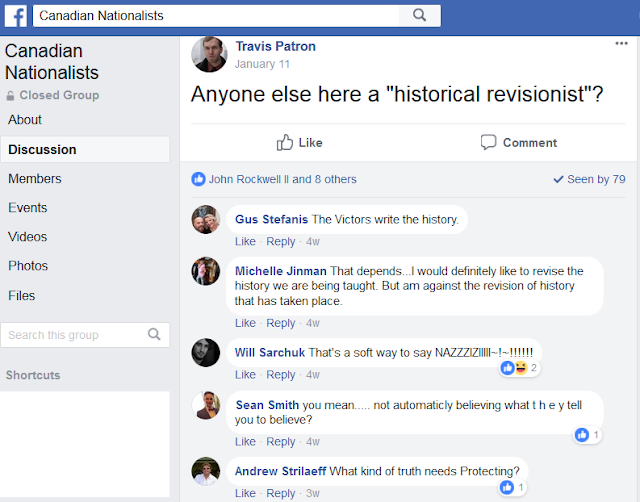 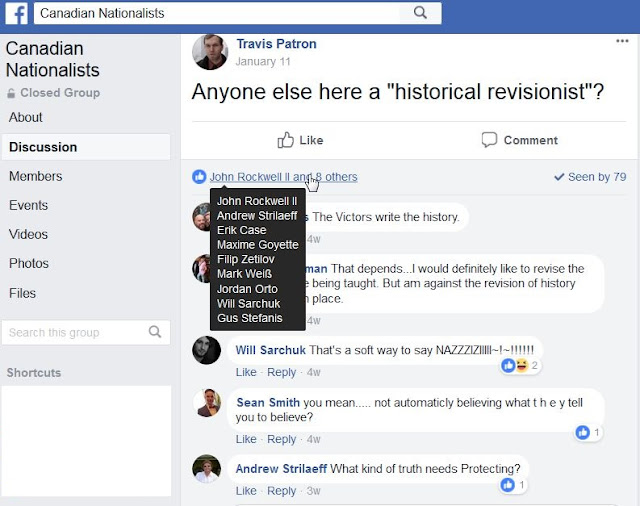 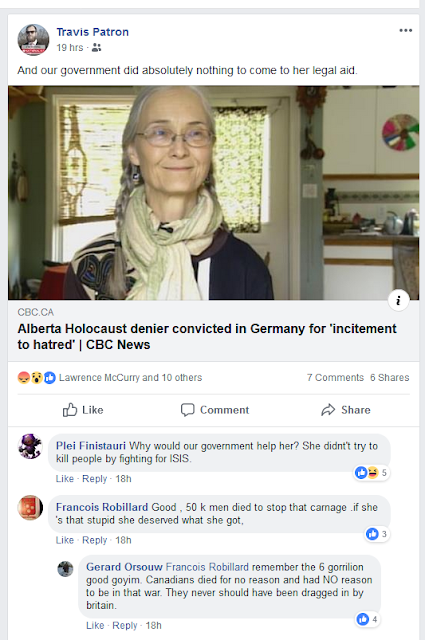 But don't think that Travis has confined his true self to the seemingly safe confines of his own Facebook group. He is quite willing to show himself on others', including virulent racist and antisemite, Devon Mannix's personal profile: 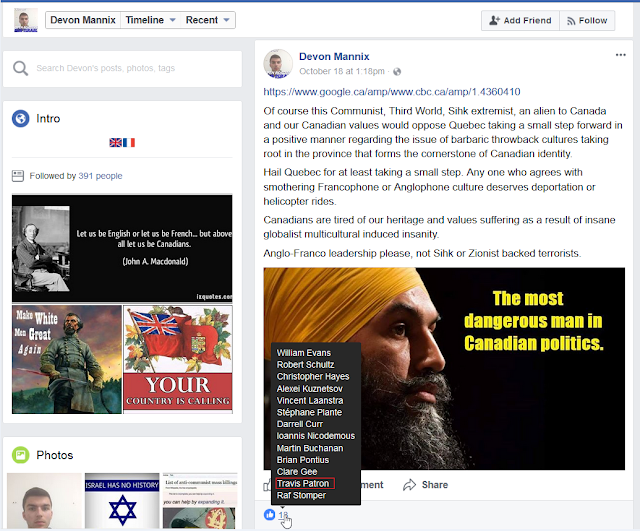 Not that the late founder/leader of the American Nazi Party, George Linoln Rockwell, is the only fascist Patron supports. Nope, he is happy to include some Canadian content: 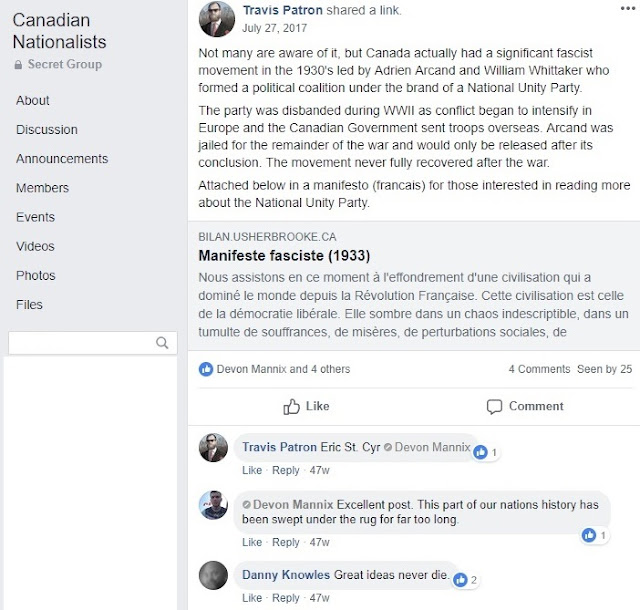 Given his overt racism and ethnic Nationalism, it is sort of telling that he is aiming to establish a paramilitary organization to operate concurrently with the Canadian Nationalist Party: 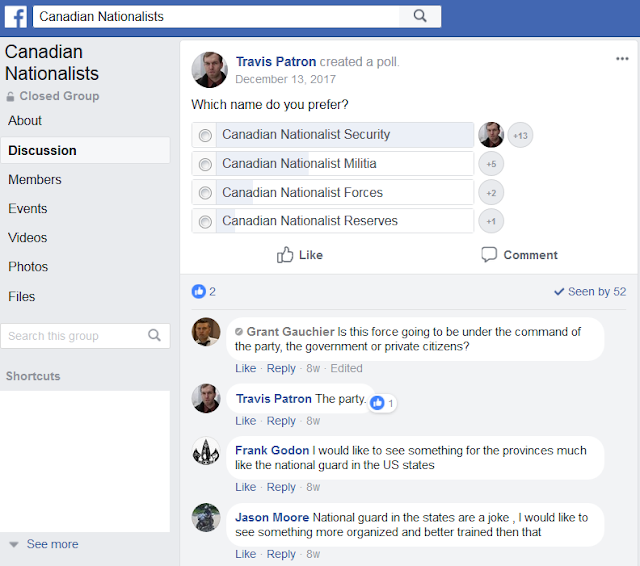 Where have I seen that play out before?

And there is what looks to be an effort to find someone capable of hacking from some unknown, though certainly not ethical, reasons: 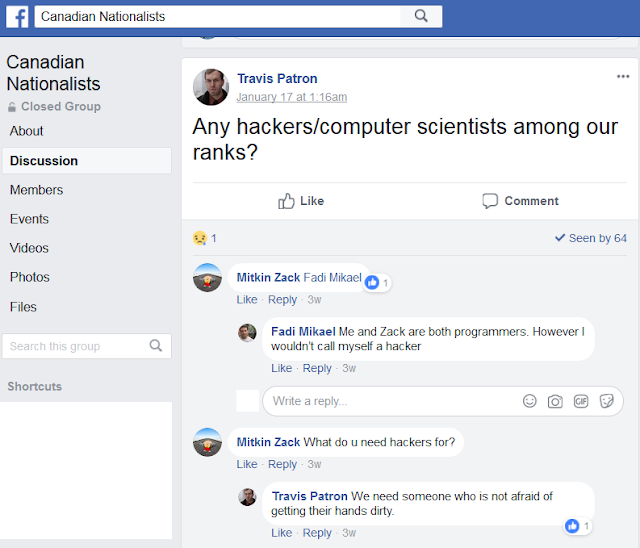 So again while I don't worry about the Canadian Nationalist Party as a political threat, it is important to watch people this toxic because we've seen what happens too many times when they are ignored.
Posted by Nosferatu200 at 22:42