With news last week that the "slightly" more rational truck convoy to Ottawa was being cancelled, we were left with the (and please forgive my use of arcane jargon) bat-fucking-insane Yellow Vest convoy remaining because what could possibly go wrong with that?

Derek Kaior harrassed Indigenous people & allies rallying in solidarity with #Wetsuweten outside of PM Trudeau's town hall event in St Cath on Tues. he threatened to run them over more than once & did hit 1 person (they're ok), then lied about it to the cops. @VestsCanada pic.twitter.com/EP0Z4pzrsQ
— Bob Nesta Makhno 🌹♎🏴 (@GilletteMachNo) January 21, 2019


In any case, one person who is celebrating is Marc "Tyler" Malenfant who is continuing to push the event on the Facebook group he created:

Malenfant has taken to posting lengthy missives on the Facebook group he administers such as the following in which he (a) encourages people to "yell" at the prime minister whom he accuses of treason (b) appears to encourage a violent revolution and (c) engages in wild conspiracy theories including those found in the discredited PizzaGate and QAnon (such as accusing Trudeau of being a pedophile):

Of course, the claims Malenfant is making regarding why Trudeau is guilty of treason are either lies, mischaracterizations of what he said, and/or divorced from objective reality.

These attributes characterize Malenfant's paranoia as well as many of those who are found in his group. Here are a couple of other examples:

And because the media has started looking closely at the reactionary Yellow Vesters in Canada, Malenfant has decided to focus the ire of his fellow Yellow Vesters on the media whom he accuses of lying even when presented with actual posts from himself and his Facebook group: 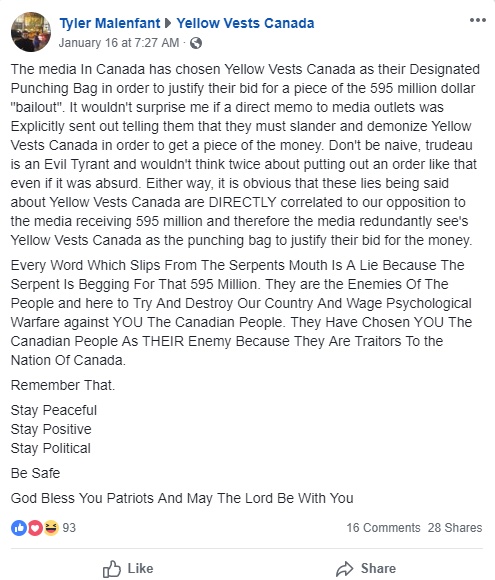 He's also not above making threats and fomenting potential violence against the media for reporting on the movement:

But in posting his paranoid delusions, Malenfant inadvertently confirms a belief I and many others have regarding the actual number of members in his Yellow Vests Canada group.

Recently, Malenfant complained about Facebook removing more than 14,000 members from the Yellow Vests Canada group. Of course this confirmed in his mind the massive conspiracy led by Facebook, Trudeau, and probably the Rand Corporation and reverse vampires. He claims that this was an act of censorship constituting treason(indicating he doesn't know what either of the terms actually mean) because Facebook gets taxpayer money to allow it's use as a forum for all political beliefs which is of course not true; it is a private company with terms of service that allow it to remove people who violate said terms of service. He further believes that the removal of the 14,000 "members" was a "direct order" from Prime Minister Trudeau.

Oh, and he compares being deleted from his group to the Holocaust. 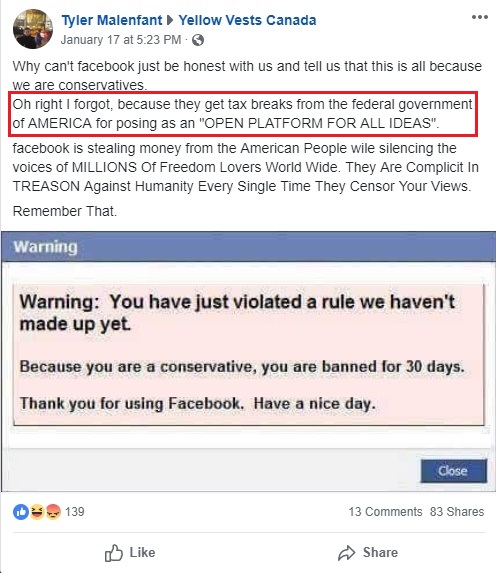 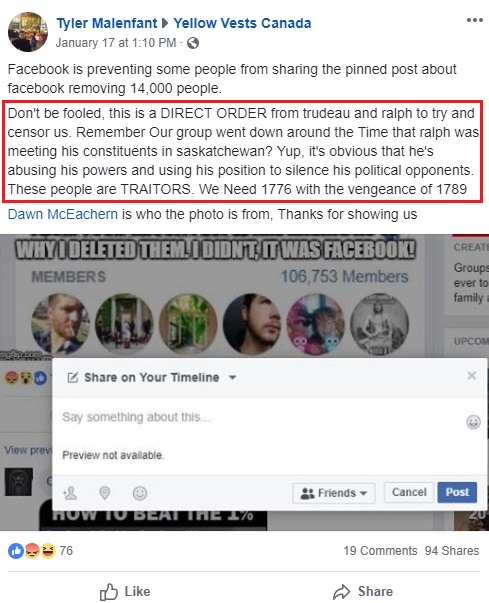 First, his claim that only three people were removed by administrators given the number of violent threats made towards the prime minister that the Yellow Vests Canada admins say they were on top of puts the lie to their claim that those individuals are being removed.

Second, the following screen shot, despite Malenfant's continued pained insistence that they are being persecuted, tells the real story: 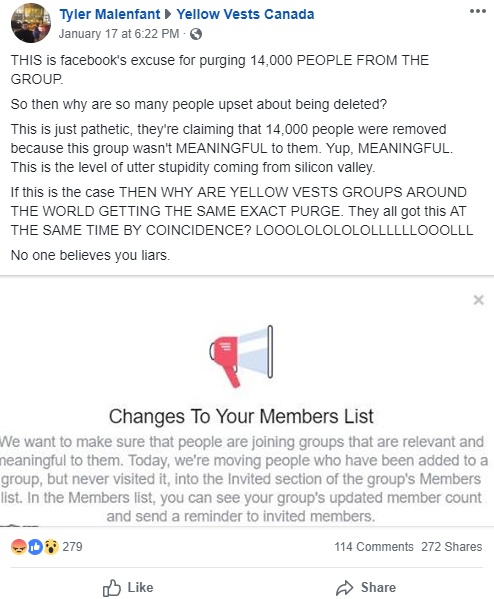 In other words, the 14,000 that were removed had been invited to the group, had never accepted the invitation, but had still been considered members until the changes made by Facebook.

They were never actually members. In fact they weren't even removed per se. They can be sent a reminder to join if they are interested in doing so, but as they never even visited the group, it suggests that they likely won't become members.

In short, Malenfant is angry that the number of members in his group more closely reflects the actual people who accepted the invitation.

Most people keeping an eye on the group have commented that the group's numbers seem wildly inflated. It is hard to reconcile 100,000+ members with the rather small protests that have occurred in the real world. From my observation it appears that only a few hundred are actively involved in commenting in the group.

Other questions I have:

In short, if anyone believes there are really more than 100,000 hard core supporters of the reactionary Yellow Vest movement in this country, I have a bridge to PEI I'd like to sell you.
Posted by Nosferatu200 at 23:00