For a long time Anti-Racist Canada has been, for all intents and purposes, the only real show in town when it came to tracking, monitoring, and reporting on racist groups and individuals in Canada that has maintained a long-term presence online. For the past few years as I've been the only contributor to ARC and let's face it, Blogger isn't exactly the best platform.

A few months ago however I perhaps, somewhat cryptically, alluded to some work being done behind the scenes that would make the work ARC does easier. In fact I suggested that it would ultimately be in many ways much more effective than ARC.

I'm very happy to see that the hard work of a lot of people has now borne fruit: 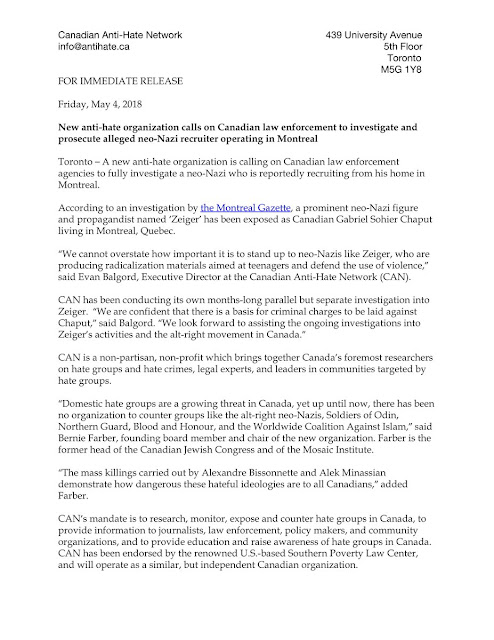 Full disclosure. I've been working with the members of the Canadian Anti-Hate Network for several months ever since it was conceived. During that period I participated in a number of conference calls that included a diverse number of long-time community activists from across the country to help build up the bones of this new monitoring group which was in large part inspired by the Southern Poverty Law Center which has also helped to set up this organization:

The SPLC provided the Canadian Anti-Hate Network with information from the infamous and now-defunct Iron March forum, including info on Zeiger, which we've been sharing with journalists & researchers over the past 48 hours: https://t.co/sIXmrpZJWP pic.twitter.com/A7L01LLiOr
— Evan Balgord (@ebalgord) May 5, 2018

As someone who has been trying to do this alone for years, this is a very welcome initiative.

With the increase in the number of hate groups in this country and around the world that are connected through and continue to radicalize each other through social media, there have been others who have stepped up as well. I'm exceedingly grateful for the work activists have been doing on Facebook for example. Much of this activism is also focused on confronting the haters in person at their rallies to show them that their hate will not be allowed to disseminate their bigotry without opposition. These efforts have sapped the strength and diminished the morale of these groups.

The Canadian Anti-Hate Network will be another incredibly useful tool in the fight against bigotry in Canada.

Currently the organization is working on gathering the necessary funding. The board of directors are speaking to some individuals who may be willing to provide some of the necessary seed money, but there is also an avenue where other Canadians (or others) who wish to contribute can do so.

For what it is worth, I have no plans to shut down ARC any time soon, but I've not made it a secret that the increase in the number of hate groups and incidents have made it difficult for me to keep up with it all. I have no doubt that the activities of the Canadian Anti-Hate Network will make my job a hell of a lot easier.

I found your site due to stories about Zeigler and the new Canadian Anti-Hate Network. I just want to thank you for your work on this. As a teacher in Montreal I am really concerned about what is happening and I would like to find ways to support this in my classroom and the cegep institution where I work. The discourse my students are exposed to is having unnerving impacts and I feel we as educators have to do more.

I too am glad that they are acting on the model of the Southern Poverty Law Center. I hope we can build a bulwark against the rising tide of xenophobia and white suprematicsm that is flooding the internet and seeping everywhere. To me finding out that Zeigler is here just is a kind of wake up call for us as Canadians. I for one intend to pay much closer attention and to create activities in my classes and with other teachers.
Again, thank you for your work..
Grateful cegep teacher