UPDATE: In what will not be a surprise to anyone, the threepers are celebrating the racist rant that occurred last month in a Lethbridge Denny's restaurant:

Remember this later on when you read the Alberta III% leader "Beau" Welling say there is no hate in their group.

When CBC did a story of the Canadian III% militia, with a special focus on the Alberta chapter, ARC published screen shots of their reaction and it was bloody hilarious! 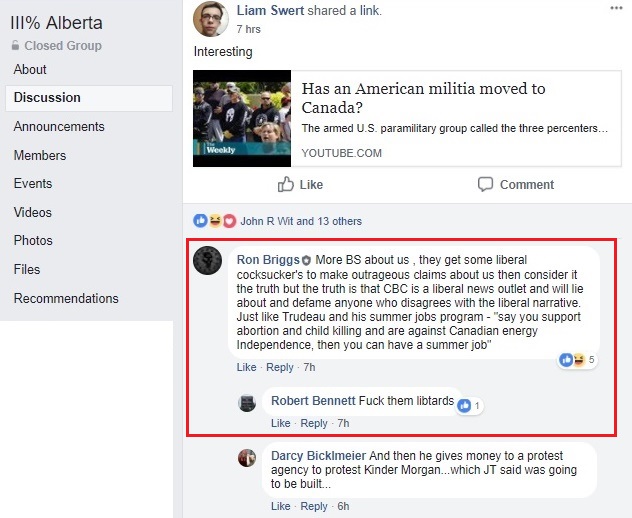 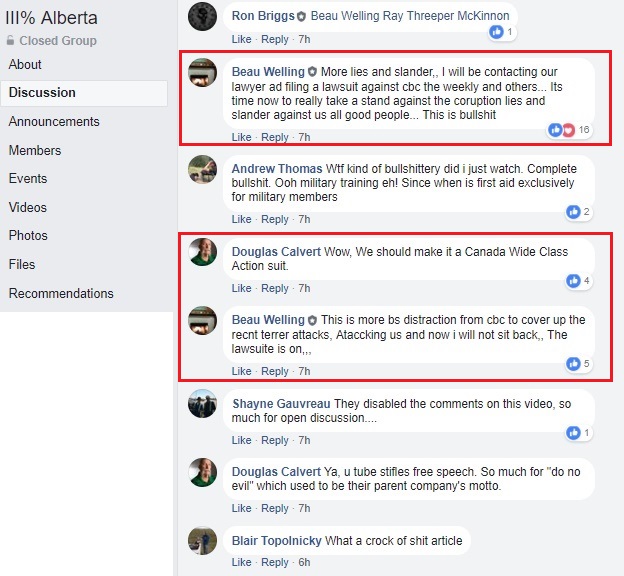 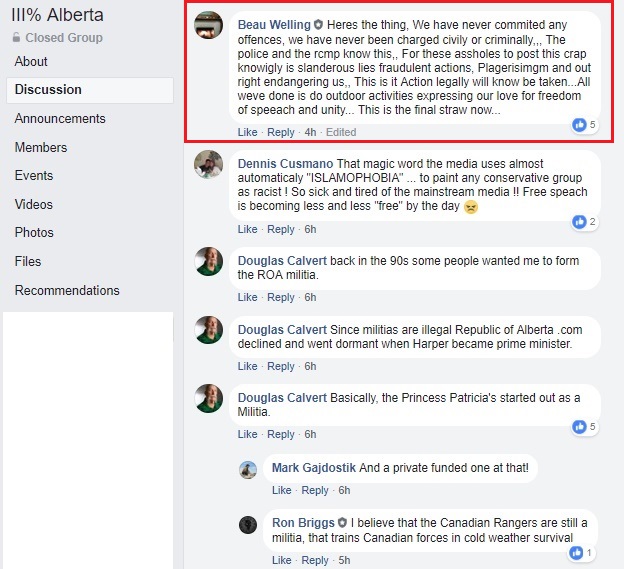 Beau Welling, leader of the Alberta chapter, claims to have been slandered as a result of CBC posting screen shots of his own words as well as the racist and violent garbage routinely posted to the III% Alberta Facebook group, which further confirms my own hypothesis that Beau Welling is both a liar (he claimed he had been hacked which is bull shit) and dumber than a sack of hammers. In the ARC article more such screen shots were posted to prove he's a liar and his group are filled with violent racists, or at least racists who talk a big game.

Not long after the ARC article was published, the Alberta III% group's name was changed and the following explanation posted: 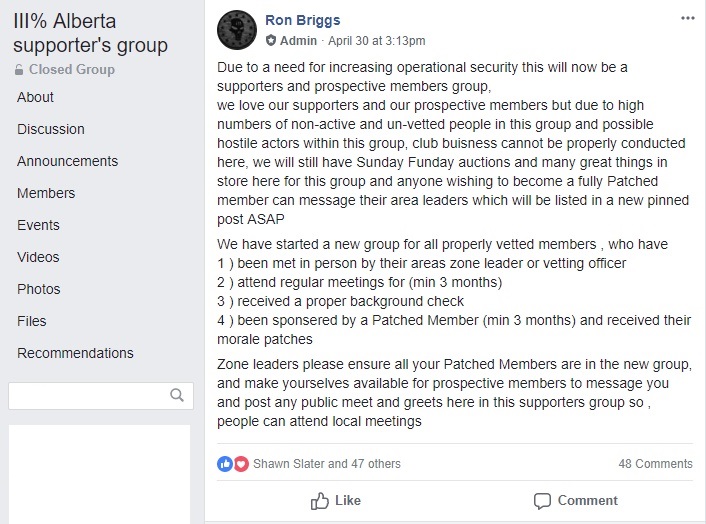 Was it something we said? 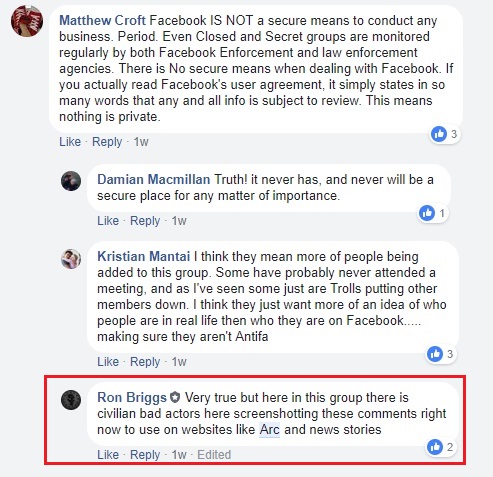 Yep. Definitely something we said.

And fyi Ron, the vast majority of you weekend soldiers are civilians and most of you would wash out of basic training in half an hour. 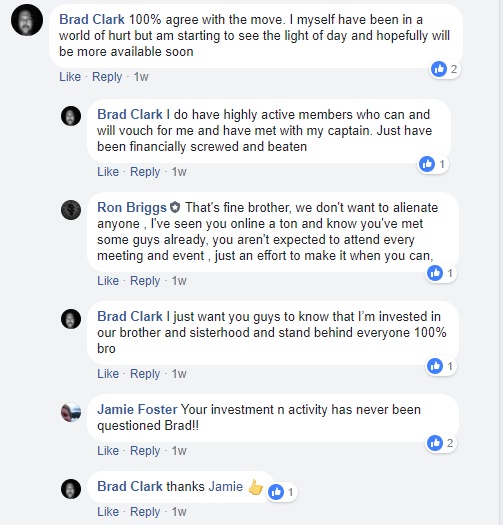 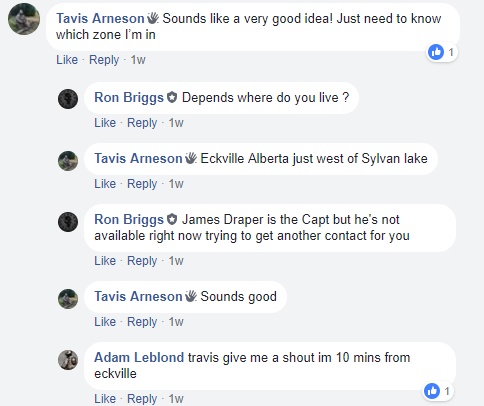 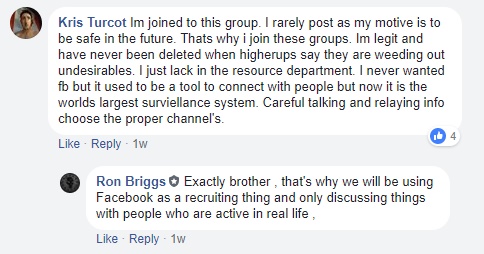 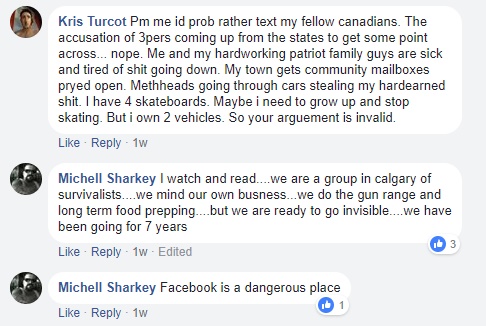 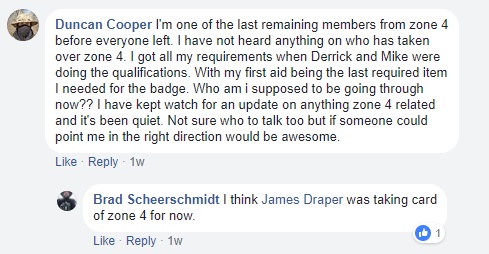 Later Beau Welling continued a thread to feel sorry for himself and his toy soldier militia for all the mean things the media have said about them by posting actual things that Welling and other threepers wrote because, how the hell is that fair?!?! 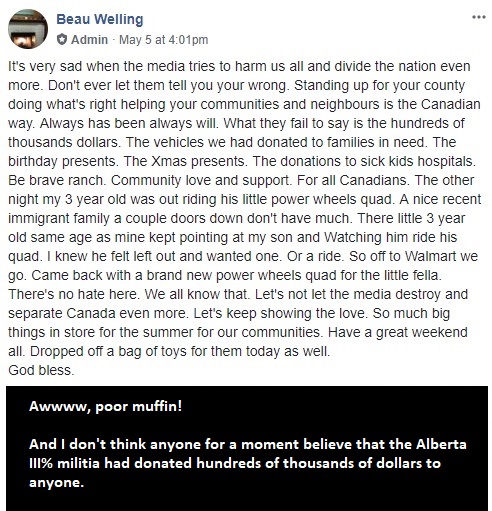 Dude, I've given people rides as well. I don't expect a story about it in the national media.

Also nobody, and I mean NOBODY, believes that you have donated hundreds of thousands of dollars to anyone Beau. In an article published today in VICE by Mack Lamoureux regarding the threeper recovery house initiative (ARC had published a story earlier here and here), he also notes how full of shit you are


As Welling didn’t answer follow up questions, how much of this is real and how much of it just bullshit is not clear (Welling is known to exaggerate). During its initial push though, it’s clear from posts in a closed Facebook group that while Welling talked a lot about helping people, positive media attention for his group was very important to him.

How did that fundraising go? 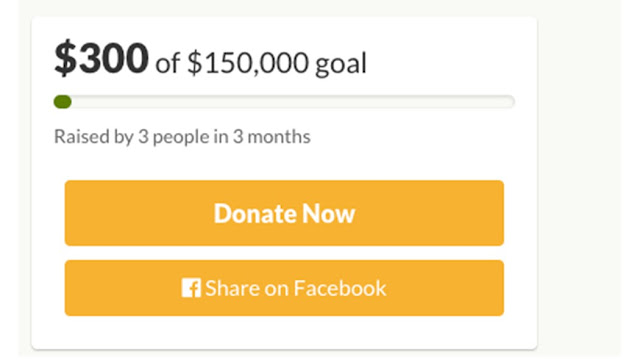 Beau Welling has to be one of the neediest men I've come across in the close to twenty years I've been monitoring hate groups. I don't think I've come across someone so desperate for affirmation and praise.

It is also really interesting to contrast the pity party with posts such as this: 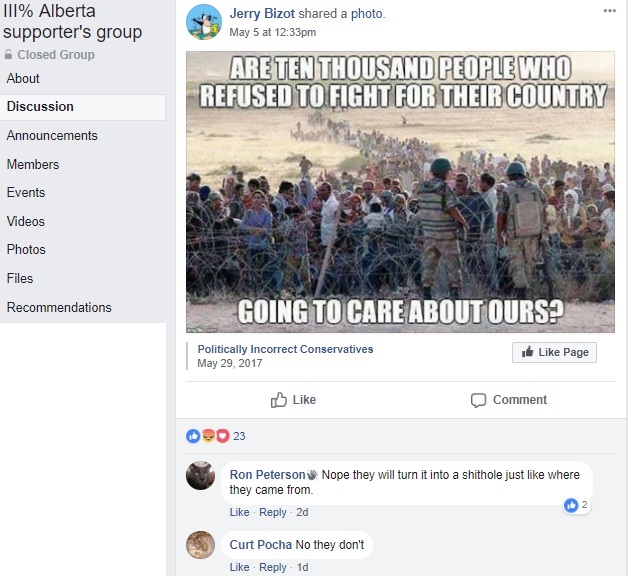 Right. Let's put this in perspective, shall we?

One group is fleeing a civil war that has resulted in the deaths of hundreds of thousands of people, leaving everything they've known in the hope of providing safety for their families.

The other group acts tough online but feel aggrieved by a negative, though completely accurate, news story. They have mostly never had to struggle for anything in their pampered lives and have never experienced the trauma of an armed conflict are criticizing refugees for not "fighting for their country" because they've watched "Red Dawn" once and know that they would definitely be one of the Wolverines.

Yeah. The threepers sure are hard.

Most of these were posted today! 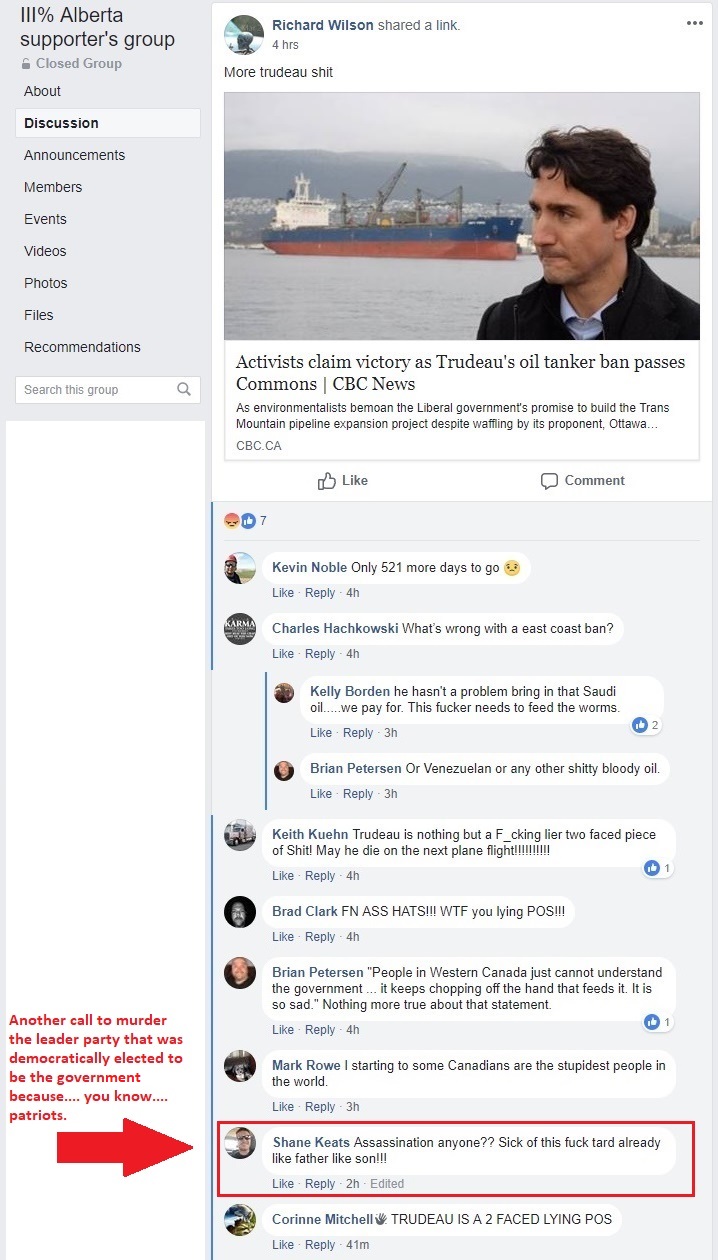 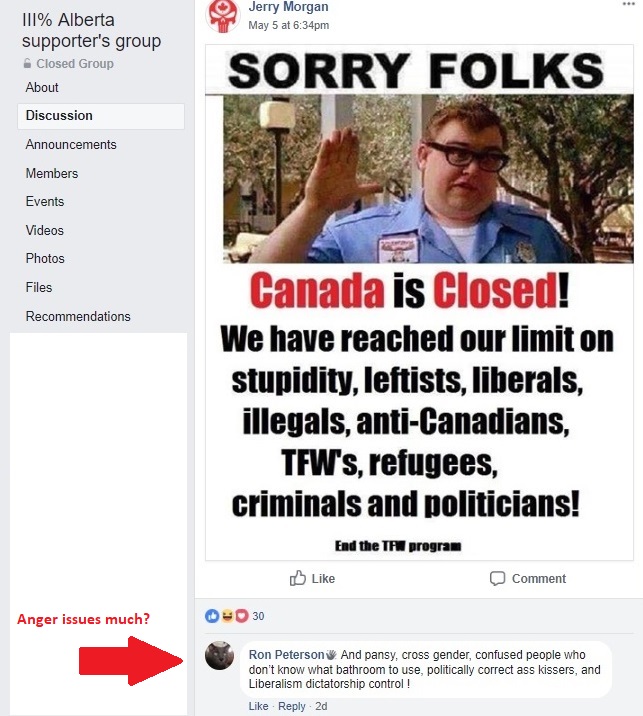 And then there was this gem (not all replies have been included):

I'm betting you're wondering if some these people don't know a Sikh from a Muslim.

You won't be at all surprised by the answer: 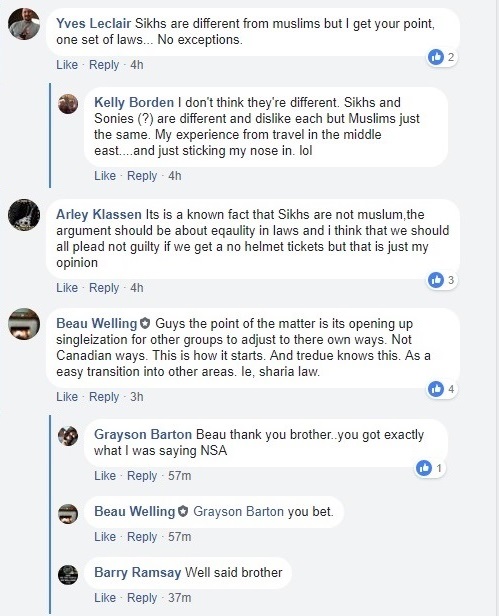 My favorite exchange though is found here: 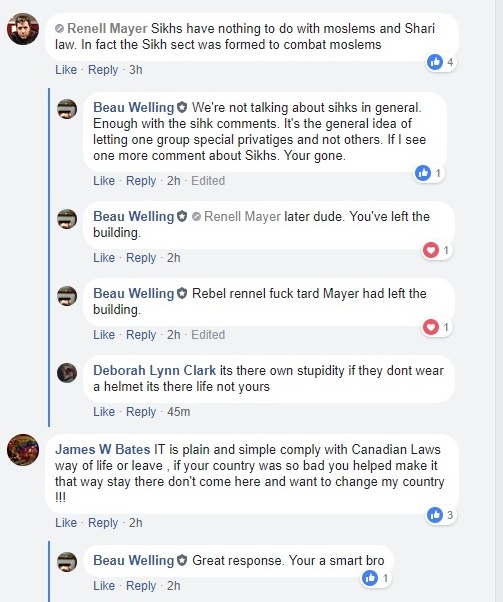 Yeah. No hate in any of that.

I have to wonder if Beau Welling is even self-aware or if he is pre-programmed to be this blisteringly stupid?
Posted by Nosferatu200 at 23:32