"Alt-Right" and Overt Racist Misogynists Focus Attention On Lauren Southern

Something that has become clear during my 10 years of running ARC as well as the decade of work preceding the blog is that most of the racists I've come across hate women as much as they hate any non-white ethnic group, Jew, or Muslim as per the following rather disgusting example:

This shouldn't be a surprise. The racist movement has historically been dominated by men who view women even of the same ethnicity not as their equals but at best as baby factories. Relatively few women seem to enter into this world which further supports the jaded view of these men that "white women" are morally weak and easily led astray by cultural trends. Of those few women who do enter this world, many if not most soon become disillusioned by the hypocrisy, rampant sexual violence, and toxic social environment fostered by the movement. The mindset of many men, frustrated by their inability to find sexual partners, might be understood in the context of the novel KD Rebel written by convicted murderer and terrorist David Lane. The novel is for all intents and purposes an extended rape fantasy in which the heroes kidnap women from urban centers, divide them among themselves, and sexually assault them until they accept their fate as wives and incubators of the new order while their "husbands" engage in a campaign of genocidal terror.

ARC has written about this many times in the past including one article that examined the phenomena from both an historical and contemporary perspective  (we also had a guest author who came at the issue from a sociological point-of-view). A frequent example of the "white nationalist" mind regarding women found on ARC has been VNN mainstay and London, Ontario resident Tomasz Winnicki:

In recent years the racist movement has made an effort to rebrand itself as "alt-right." Those alt-right supporters linked to.... let's say 4Chan are also notoriously misogynistic as well (see Gamergate controversy as an example), however some members of this subgroup of bigots are often more adept at using social media and cultural touchstones. They couch their hatred in appeals to nationalism and tradition. The movement is also notoriously anti-feminist. Still, that anti-feminism has counter-intuitively attracted some women who have become quite prominent figures in the alt-right: 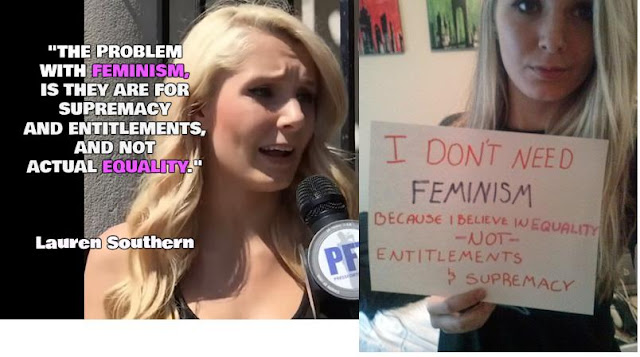 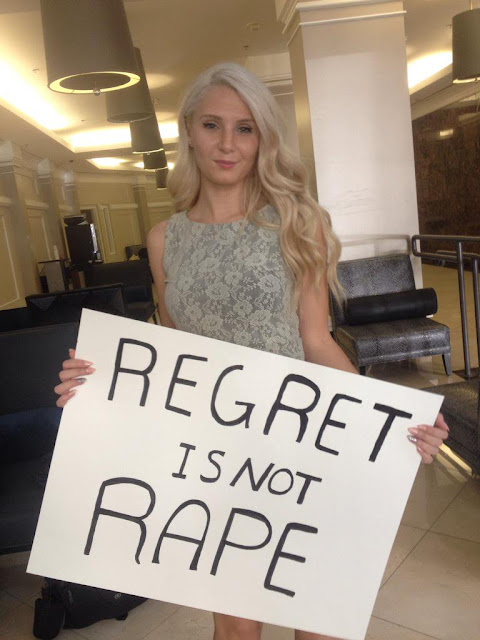 Lauren Southern, formerly of Ezra Levant's "Rebel Media," has been a bit of a darling of the alt-right due to youth and attractiveness, her attacks on feminism, and her support of ultra-conservative traditionalism; she has amassed a considerable following. Her appeal has crossed over into the more overt racists on Stormfront and even the even more racist VNN:

However she and other female alt-right personalities have come to shockingly learn that their male alt-right anti-feminist admirers are misogynistic assholes who thought it was all cute that these women were speaking out in support of their retrogressive values, but now it is time for them to shut up, marry good white men, and start pumping out the babies:


One of those "alt-right" men attacking their female alt-right counterparts is rape advocate Daryush "Roosh V" Valizadeh who's trip to Canada went rather poorly, though Ezra (as it turns out ironically) engaged in a softball interview with him. 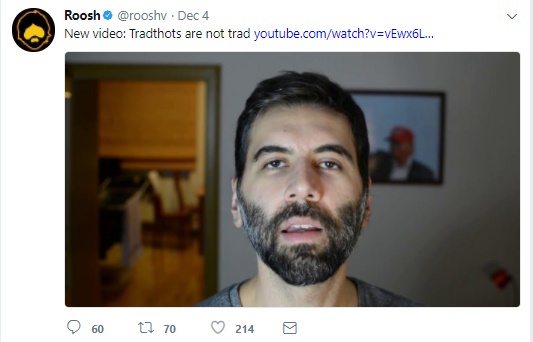 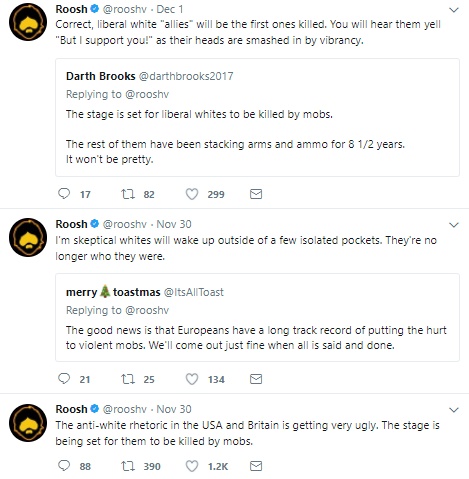 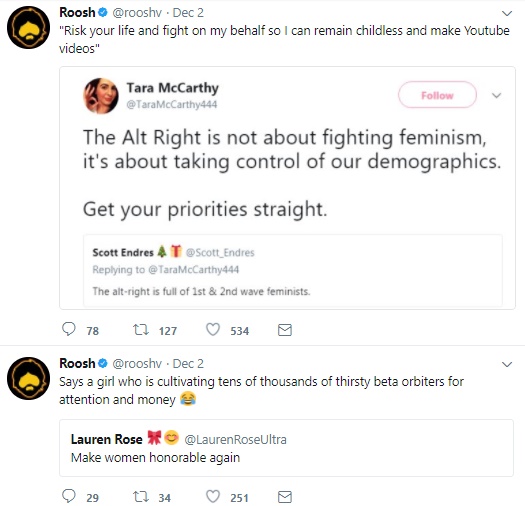 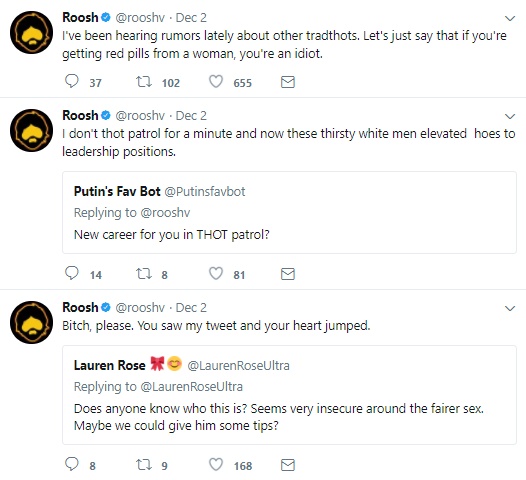 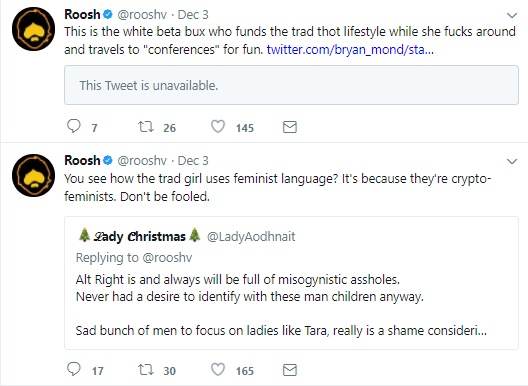 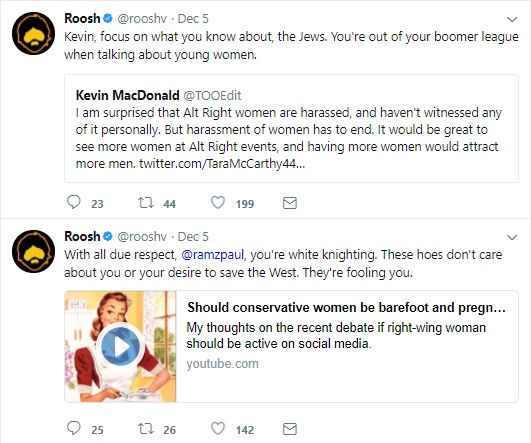 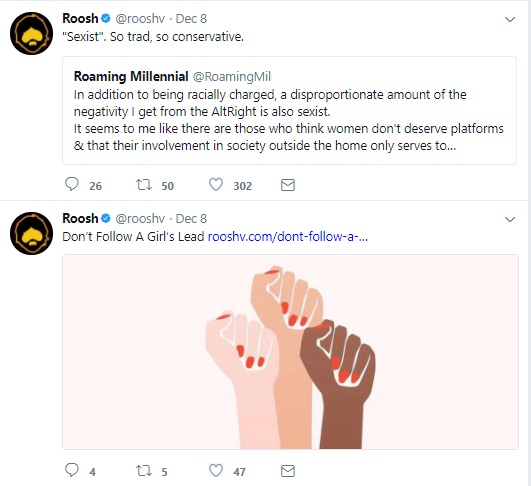 .... but he does approve of another miscreant's point-of-view on the subject of women in general:

Given the hatred of women exhibited by members of the racist movement, it should be surprising that Andrew Anglin, the especially creepy dude who runs The Daily Stormer, has been among the most.... shall we say pointed in his critique regarding women in the movement. The following was originally found on his own website but was posted by a supporter on VNN: 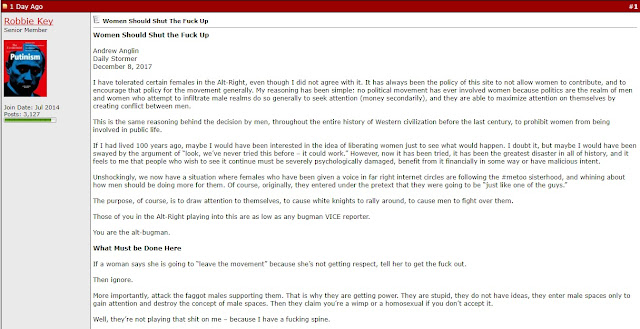 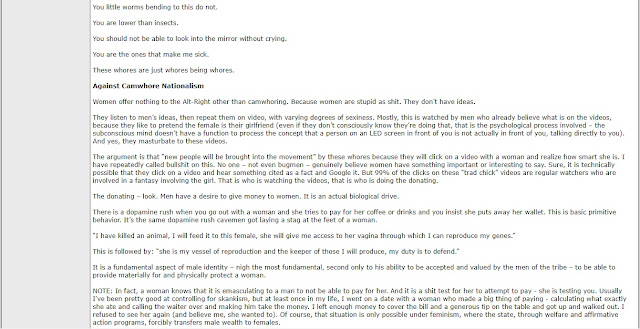 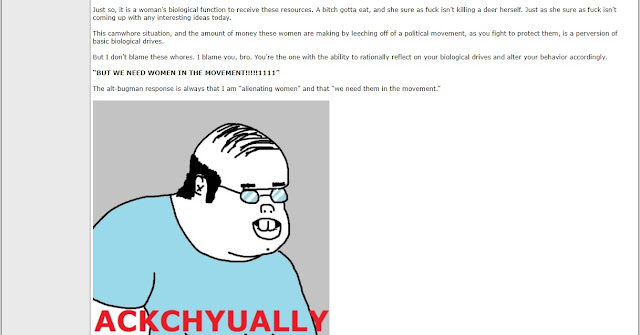 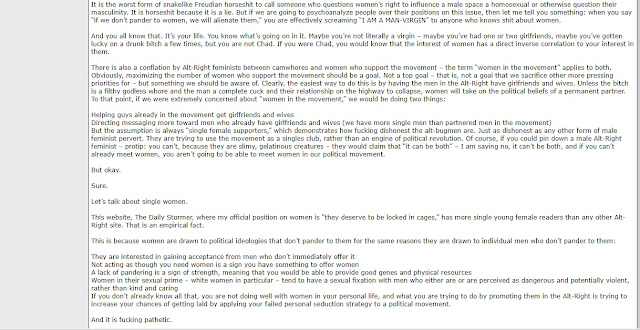 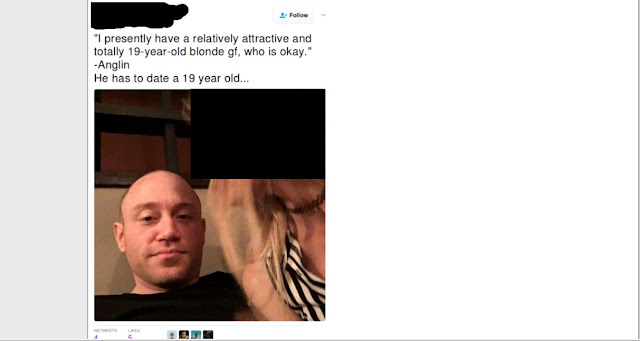 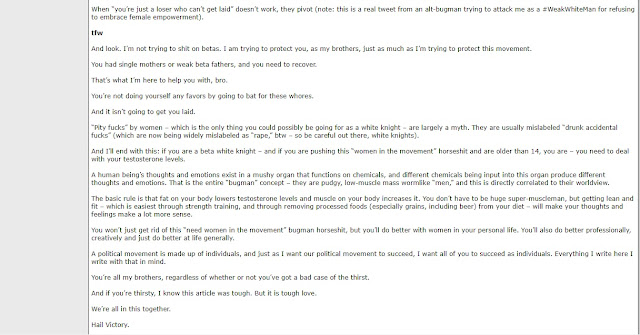 The misanthropes who populate the VNN forums agree wholeheartedly: 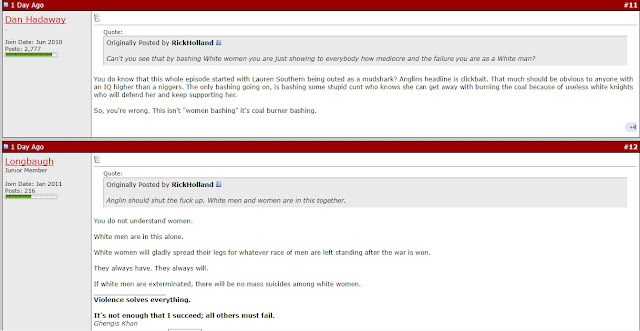 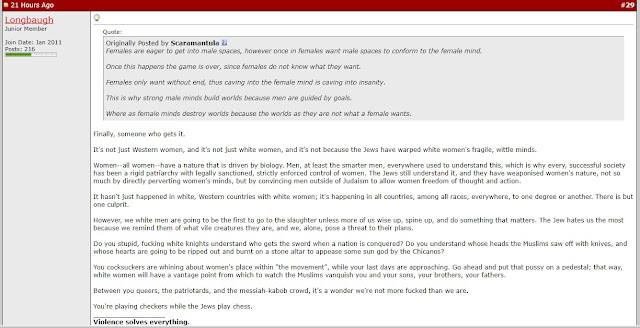 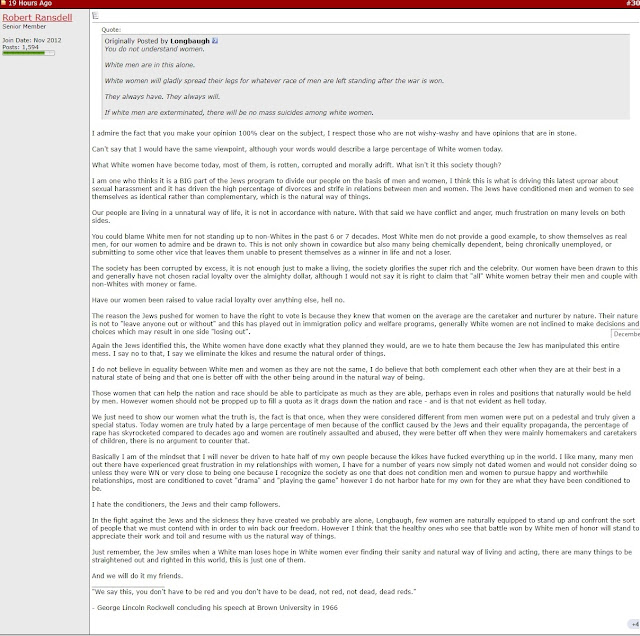 So the folks that were once supporters of Southern? Not so much now: 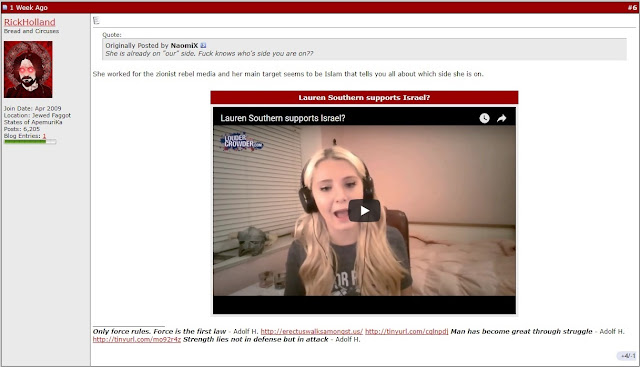 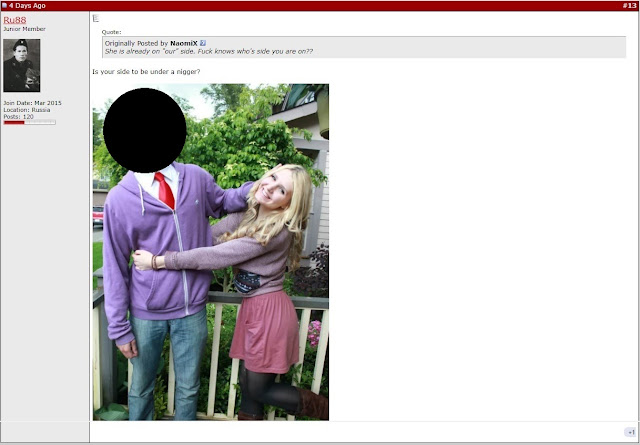 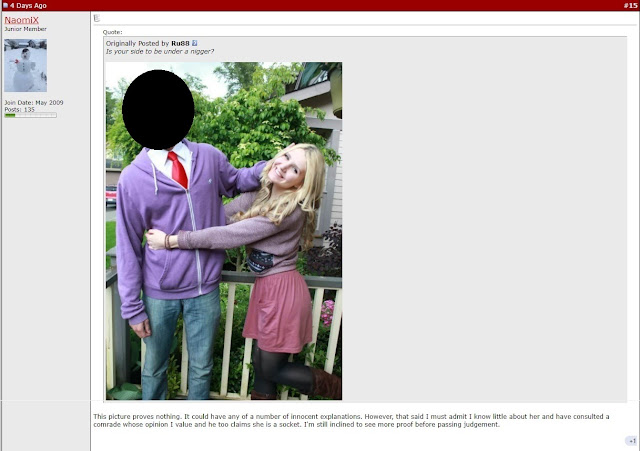 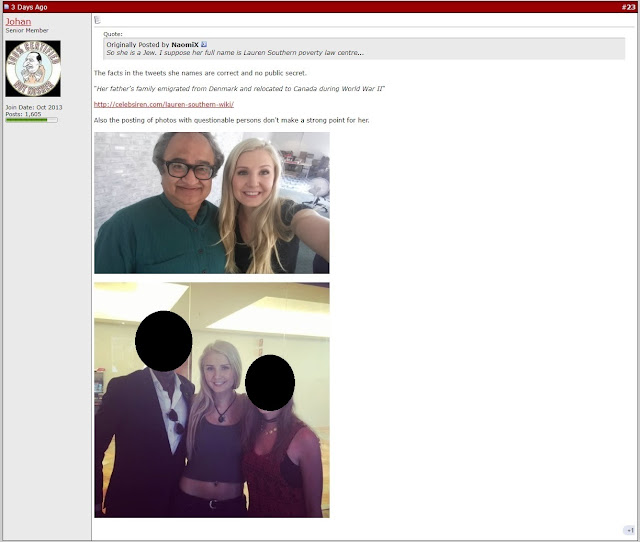 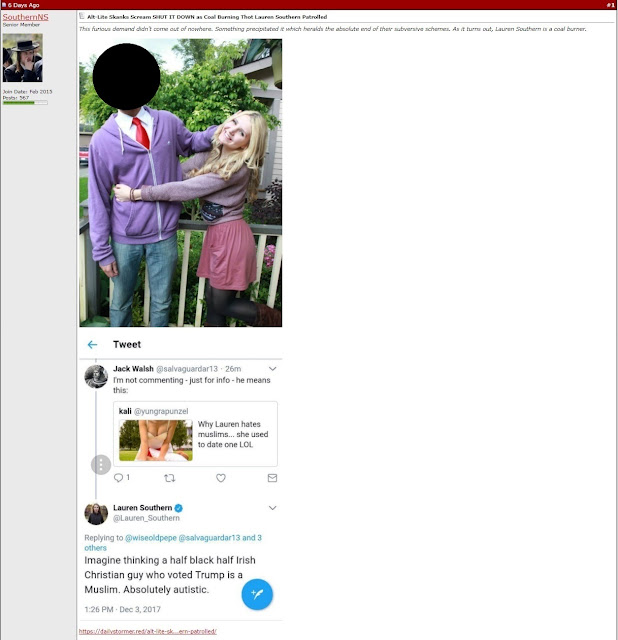 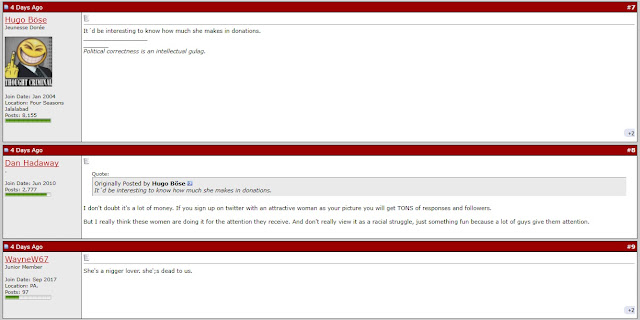 If one can believe it, the discussion about Lauren Southern was practically muted on VNN when compared to that which took place on Stormfront: 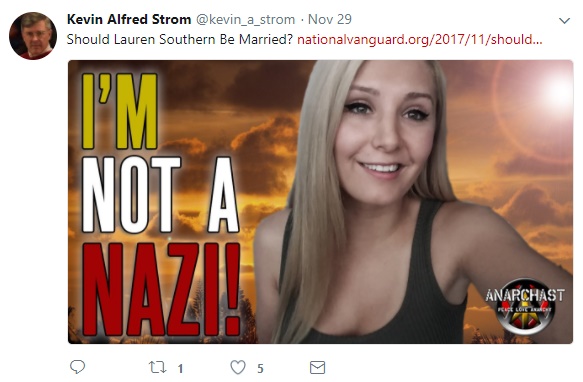 Yep. That guy. That said, Ms. Southern needn't worry about Kevin Strom. While she is young, she isn't young enough for his particular tastes.

And yes, I did sort of throw up in my mouth a bit there.

But we aren't done yet.

Brandon Martinez, a conspiracy theorist, anti-semite, "journalist" with an incredibly inflated sense of his own intellect has decided to venture down the alt-right path. And he too isn't a fan of the skirts intruding into what he thinks is a man's world: 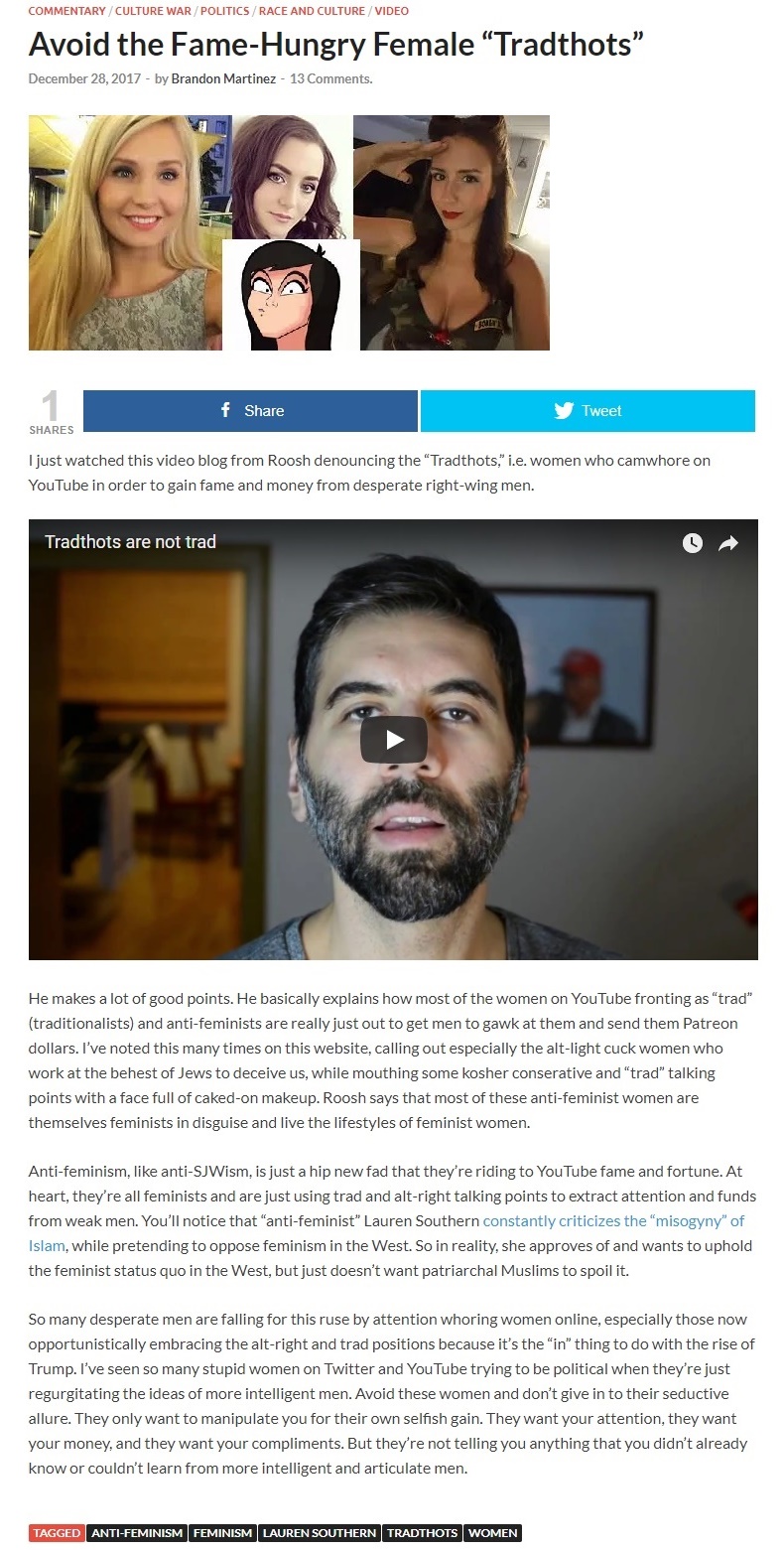 It behooves me to now mention that Lauren Southern isn't the only Canadian alt-right personality being targeted by her erstwhile male allies. Hell, she's not the only "Rebel Media" correspondent being targeted:

Yeah, embracing ethnic nationalism hasn't been much of a win for Faith Goldy, especially when the people most receptive to the message want you subjugated:

But yeah.... we should really worry about Muslim-Canadians. That 3.2% of the population represent the greatest threat to women.

It really is a shame that sarcasm isn't as obvious online.
Posted by Kurt Phillips at 23:25

For the record Shoeonhead (June) is a centre leftwing MRA antifeminist, not alt right and she wasn't happy about being linked to the alt right.

Roaming Millennial is Libertarian not alt right again, she not even white, she is a happa.

Too many people get called alt right falsely when they are antifeminist. It's a horrible smear.