On November 30, 2017, Ronny Cameron was shocked! Shocked I say! Shocked and, in fact, disgusted! So disgusted that he HAD to record the incident and then share it with all of his faithful followers so that they too could be shocked and disgusted at perhaps the most heinous defilement of a major urban center Canada.... nay, the world, had ever seen:

The video is edited to spare the delicate sensibilities of my dear readers (and more seriously to as best I can preserve the dignity of the subject of Cameron's video because he really is an asshole): 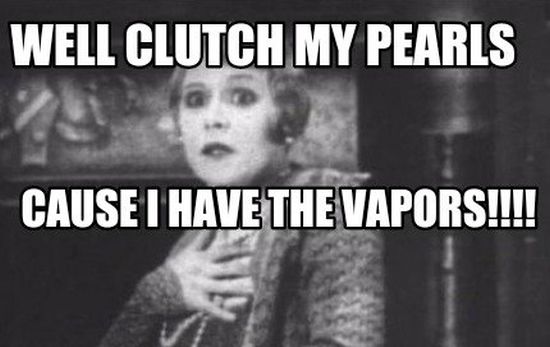 Now I don't know what the circumstances are behind the video, aside from what looks to be some pretty repulsive and exploitative voyeurism on the part of Cameron. The woman may be homeless and/or mentally ill. Or she might be someone who REALLY had to relieve herself and said, "fuck it!" There is also no indication of the woman's ethnicity and given the time of night I'd be willing to bet that Cameron really can't be certain either, however he is SURE that this is indicative of "third world" practices, is un-Canadian, and is an example of the failure of multiculturalism: 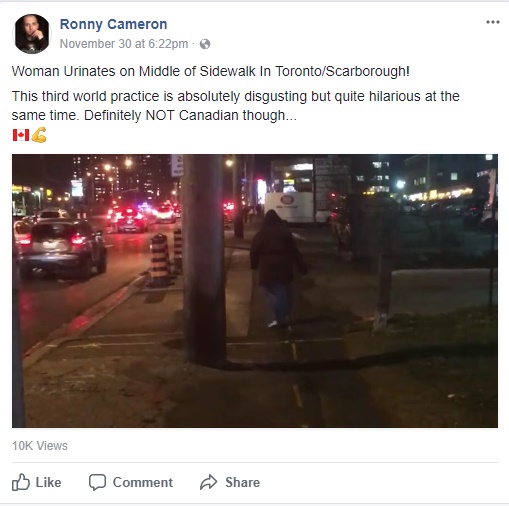 His followers agree and know instinctively who to blame.

Muslims, immigrants, and people of colour: 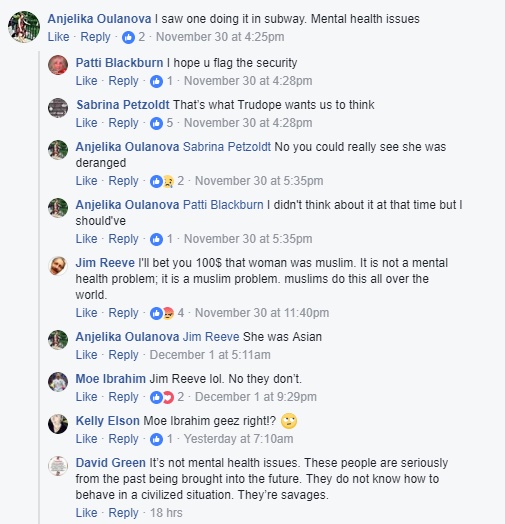 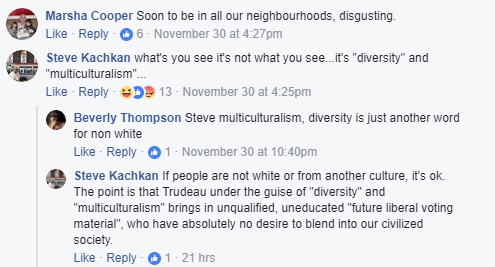 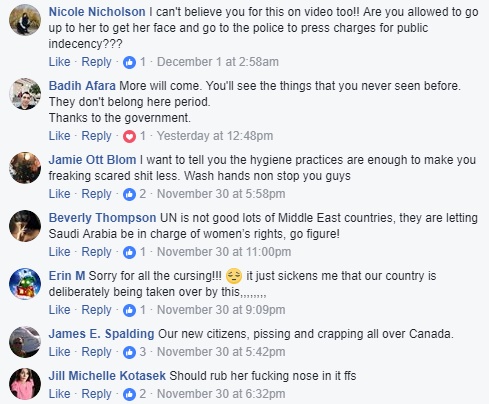 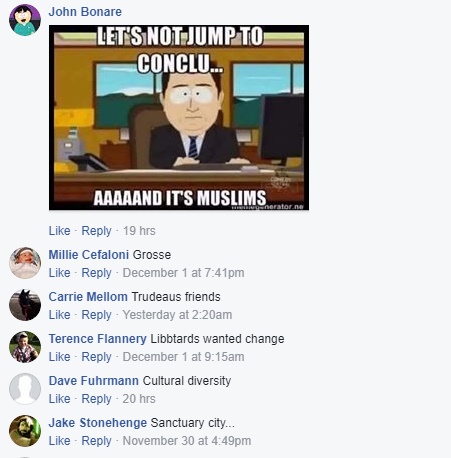 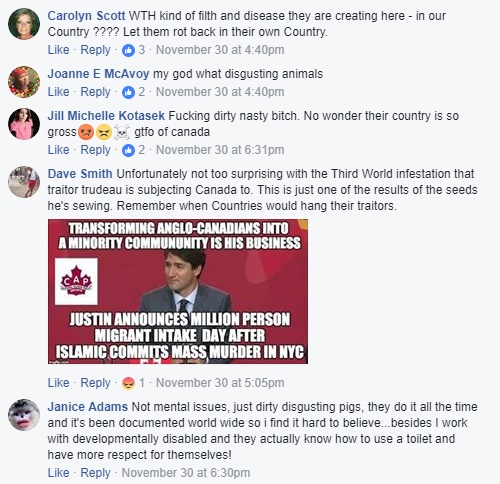 The pearl-clutching and claims that public urination are acts unfamiliar to civilized Canadians before the unwashed brown hordes invaded the nation are especially ridiculous to anyone who has ever attended an outdoor concert in this country.... or a street party.... or a Friday night in any place with a university, pubs, and no public toilets.

I mean, it took me all of 3 seconds to find a Montreal police officer.... 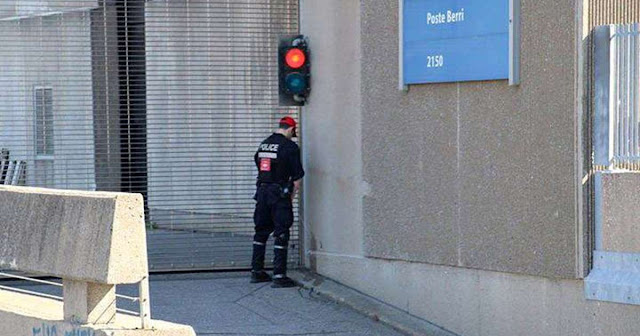 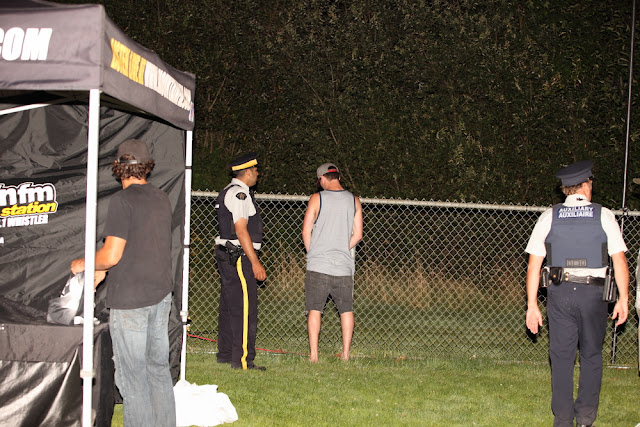 .... and an act of intentional public desecration in Vancouver: 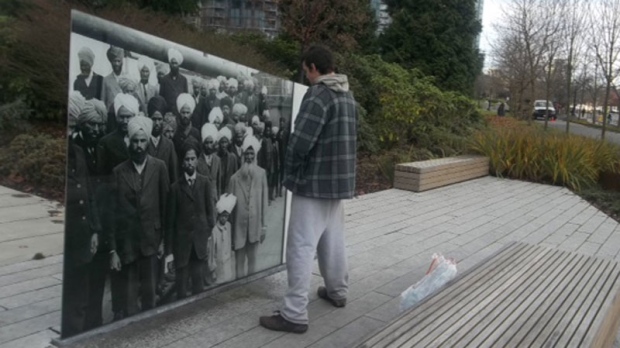 Hell, ARC published an article in June featuring the very classy Joey DeLuca watering the asphalt behind a gas station after the Worldwide Coalition Against Islam and Canadian Combat Coalition held an anti-Muslim/anti-immigrant rally in Calgary:

Honestly, I never thought that there would be two articles referring to public urination on this blog, but here we are.

I could post numerous other photos of people publicly urinating, such as these ones: 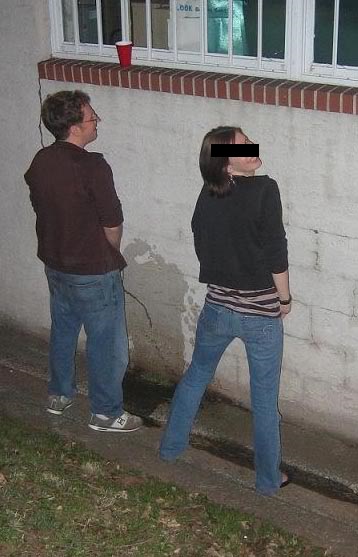 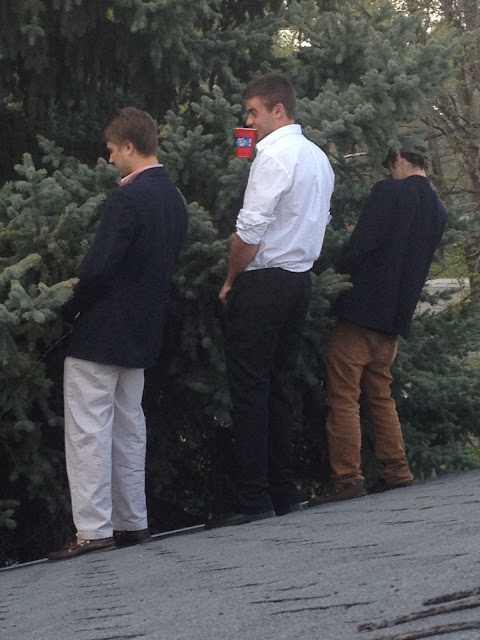 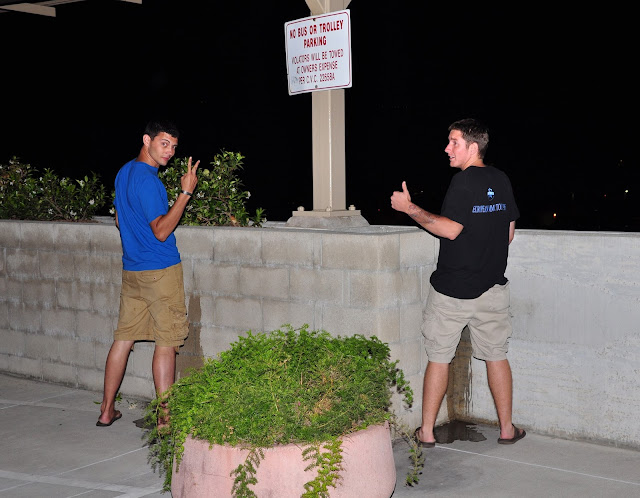 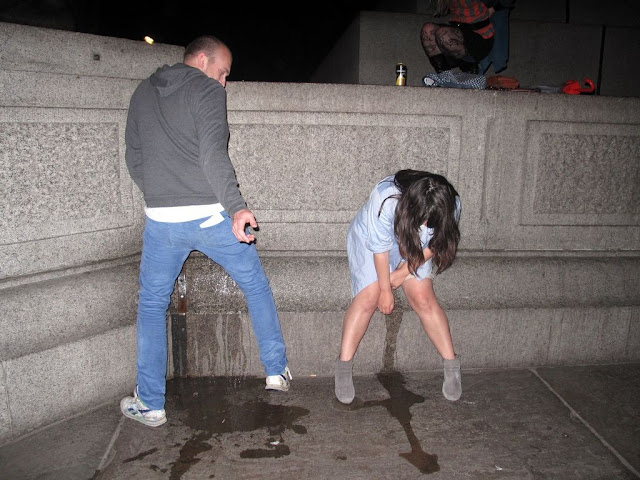 Even one of the people commenting on Cameron's video was at least honest that he has also engaged in the same activity, but the response he received from another poster is telling:

You see, public urination is perfectly acceptable if you are a REAL Canadian and a male, but I can't help thinking that Cruickshank's opinion would be different if the male in question was not a REAL Canadian.

A REAL Canadian is synonymous with white Canadian as clearly indicated by Cameron's video and subsequent comments made those who viewed it.

That's sort of the crux of the issue. The entire purpose of the video was to dehumanize people who don't fit Cameron's view of who a REAL Canadian is. It is to make those people appear to be so alien so as to strip them of their humanity and make them easier to despise. They can't fit in. They will never be a part of "my country." They are forever interlopers trying to impose their barbaric, savage, practices on me and my family. The invaders must be both feared and hated, "foreign bodies in the organisms of their host peoples."

I know, it all seems sort of melodramatic, but we've seen this show played out before.

Georges Hallack, who was recently in Europe, agrees with Cameron concerning the nature of those "foreign bodies":

Hallack himself has started to engage in the same kind of race-baiting that Cameron engages in:

To be clear, he gives his answer almost immediately while those who provide their answers seethe with racial animus and resentment: 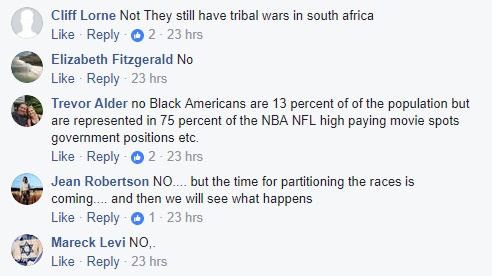 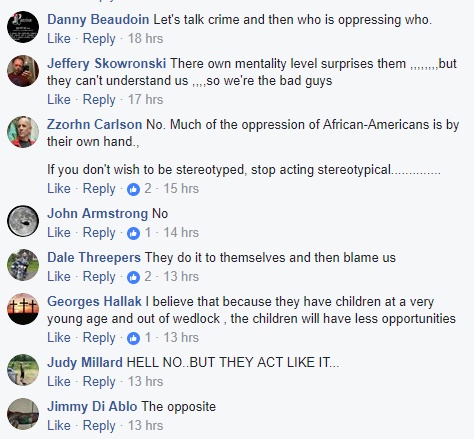 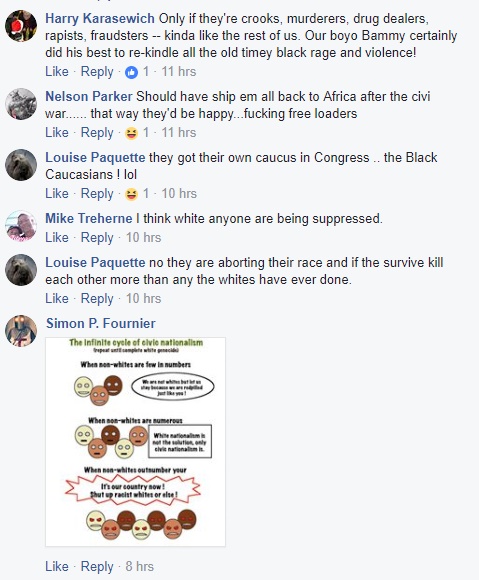 Now that the Other has been sufficiently dehumanized, Cameron continues with the white genocide myth and an overarching sense of victimization by the Other.

They also suggest some solutions, including some not too veiled references to genocide which, considering the efforts to dehumanize the Other, shouldn't be surprising: 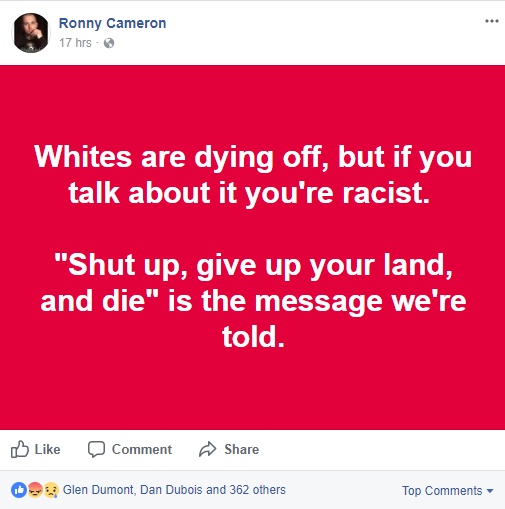 Those who are to blame? Cameron runs through the list of progressive boogeymen as his posters suggest (((others))) as well: 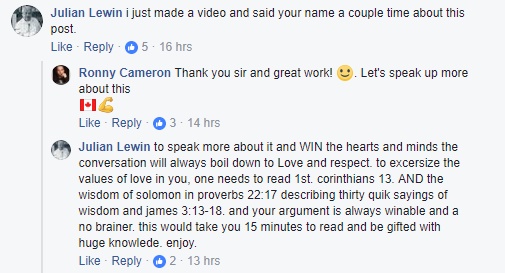 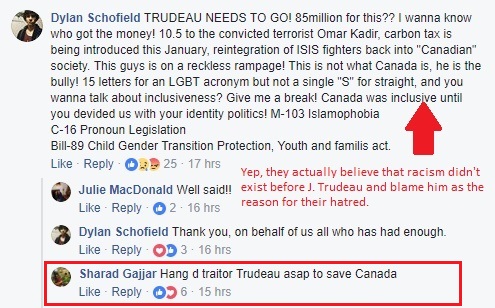 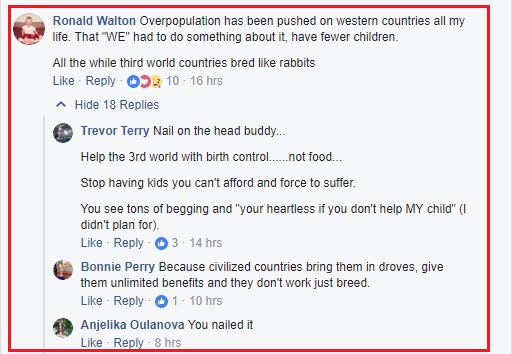 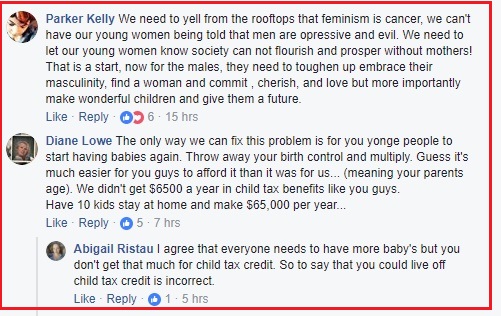 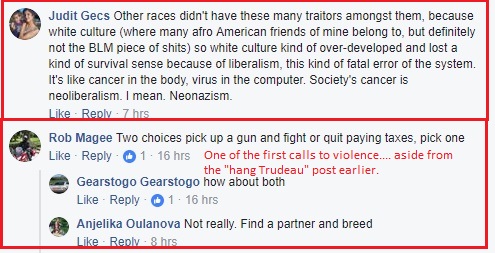 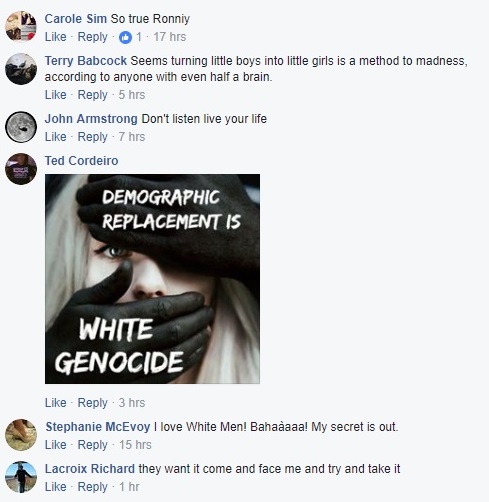 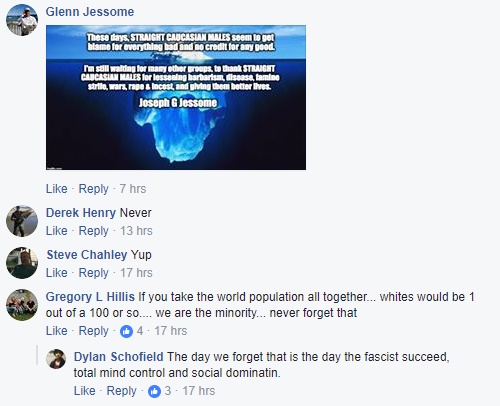 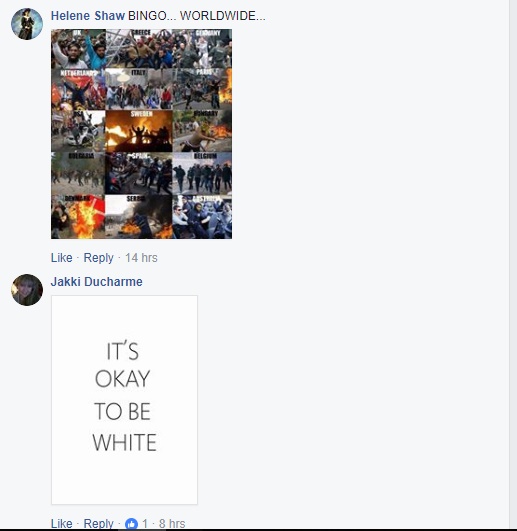 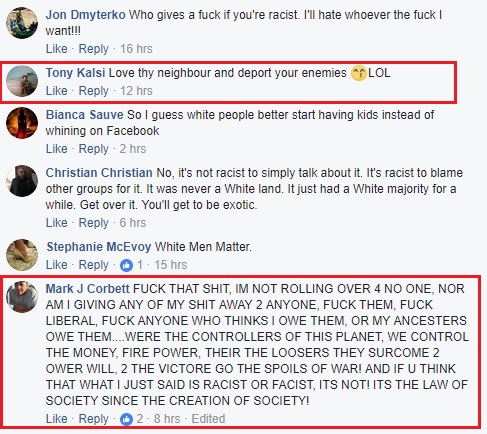 At least one supporter suggested that Cameron might be on a dangerous path: 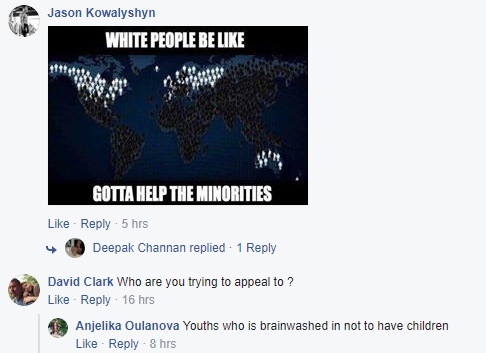 And another commentator (likely not a Cameron supporter) called a spade a spade:

But Ronny is Facebook famous, so he doesn't seem to care: