It might be a bit early in the month to post a Bits and Bites article, but I figure if another is necessary later, I'm sure the readers won't mind.

In any case it has been a busy couple of days and I thought that I should address a few recent news stories that crossed my desk.

The first deals with racist notes left (and in at least one case thrown through a window) at the home of two women in Calgary:

Calgary police say they are investigating after two women in the same neighbourhood received racially charged letters that threaten extreme violence against them, signed with a similar symbol that blends a Canadian flag with a Christian cross.
....
Both letters are signed with a symbol that is "essentially a Canadian flag with a red cross in the centre of it, rather than a maple leaf," said Misty Wind Shingoose, a resident of the southeast community of Deer Ridge.

Shingoose said she awoke on Saturday to find a bed sheet sprawled out on her front lawn with a note left on the sheet.

"There were death threats, threats of rape, and racial slurs and comments about me being an Indigenous woman," she said of the note.

"It was really quite horrific."

The note expresses anger at Shingoose for parking a large bus on the street in front of her home, a vehicle she has been retrofitting to use as a mobile hair studio to give free haircuts to the city's homeless. The bus was also vandalized.

The note threatens specific sexual violence and murder against Shingoose.

A second woman was also targeted on the same street:


Later, Shingoose said she was contacted by a neighbour who received a similar threat.
"She essentially told me that she had the same symbol on the bottom of a letter after a massive stone was thrown through her window half an hour after my bus was vandalized," Shingoose said.

"She's not Aboriginal. She's white and she had a Naheed Nenshi sign on her deck and her letter went off of that."

Shingoose provided CBC News with a copy of the letter her neighbour received.
"You support Nenshi?" the letter says, referring to Calgary's mayor, who is Muslim.
"You are a Muslim sympathizer pig and you will pay."

It goes on to tell the woman to either move or "have your house burned down in the next few years."

It also offers "forgiveness" if she places a sign bearing the same flag-cross symbol on her fence for a week.

Ms. Shingoose posted a copy of the two letters as well as the vandalism done to her van on social media in an effort to elicit the public's assistance in determining who the individual is. I would ask ARC's readers to pay attention to the symbol posted to the letters as that may jog someone's memory as to who might have left the notes and vandalized the bus: 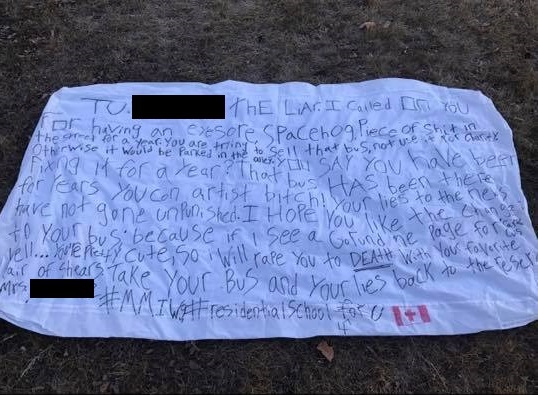 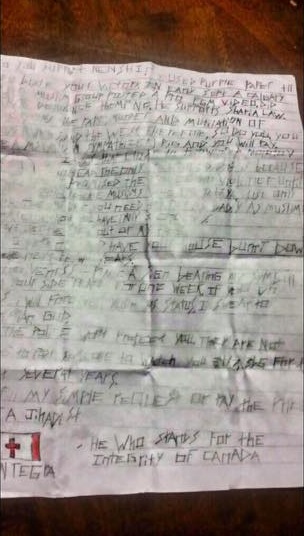 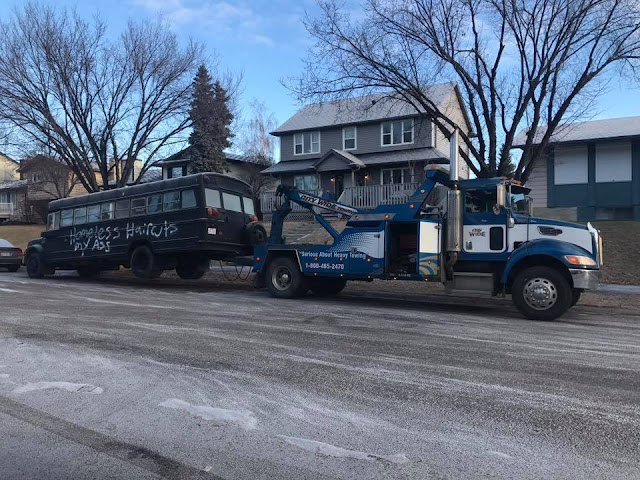 She also included the following:


So my Neighbour down the street from me ALSO had her home vandalized (huge rock through her window) for having a Nenshi sign on her house!! The guy left this threatening letter WITH THE SAME SYMBOL on it as my note!!

Happened the same night, about 30 mins after!!

Completely premeditated and he's been watching all over our area obviously!

I am standing up against this RIGHT NOW and Phil and I plan to canvas the neighbourhood EVERY HOUSE in between mine and their home and around this direct vicinity with pamphlets I am making right now. They will have info regarding this cowardly person THREATENING us for simply existing in this community in a manner in which he doesn't like.

Also in Calgary this weekend, Blood & Honour members were also active leaving a flyer at the residence of Jason Devine: 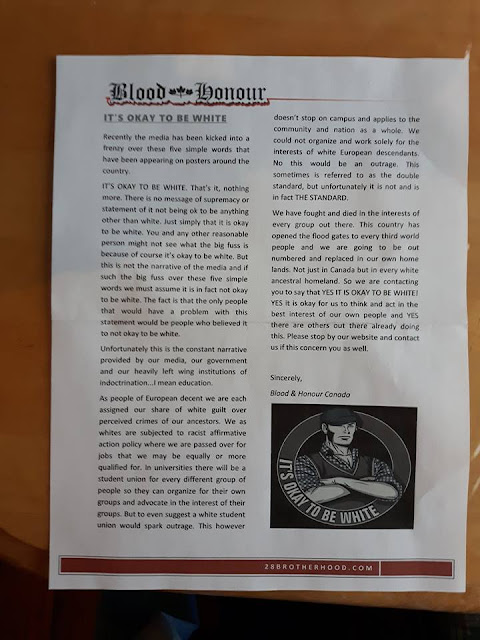 Jason, Bonnie, and their children are sadly all too familiar with McKee and co as they have been the targets of vandalism, at least one firebombing, and a home invasion and assault all of which Blood & Honour (and their predecessor the Aryan Guard) are suspected of having carried out. The flyer was found only at the Devine's home; none of the neighbors received it so it is clear Jason and Bonnie were specifically targeted.


By the way, although Calgary's Blood & Honour have been a bit more under the radar, they have been busy, This for example was found at a technical school in the city in early November: 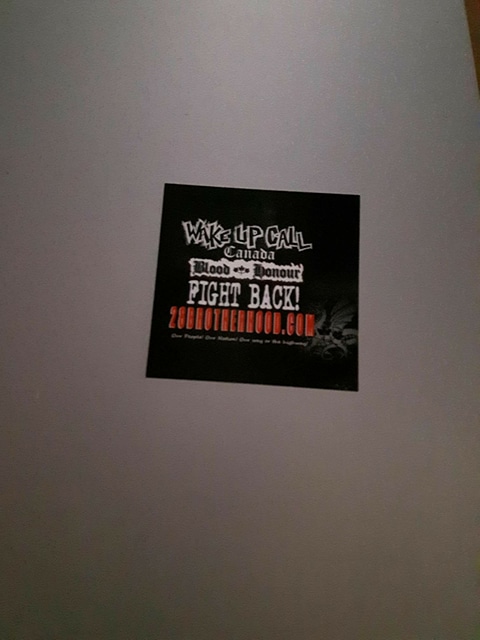 But getting back to the flyer left at the Devine's yesterday, it does serve to prove two points:
Also, if McKee is feeling smug about knowing where Jason lives, well.... 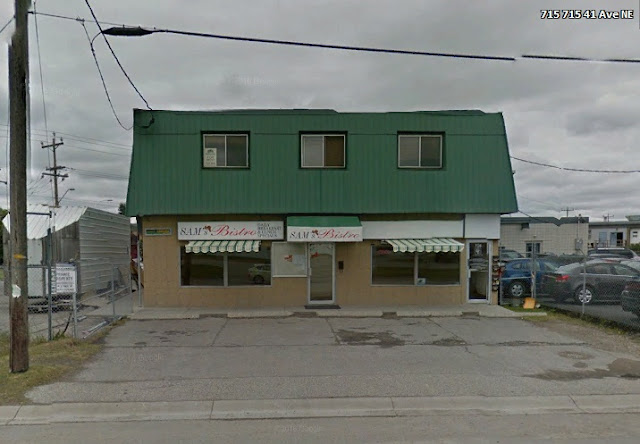 Oh, we all know the Blood & Honour club house isn't located here any longer. They moved months ago, though ARC did have this information prior to their move. But it should serve as a reminder that even if ARC isn't talking about you, ARC is still pretty good at digging up information when necessary.

I wonder who else received this information?

But speaking of the "It's Okay to Be White" campaign, Ronny Cameron who has been a proponent of this as well as the "white genocide" myth has spoken out about his relationship with the Jewish Defence League which Ron Banerjee had suggested had been severed. Suffice it to say he's not pleased with Banerjee:

So Cameron who pals around with white nationalists and antisemites while promoting their conspiracy theories is still tight with Meir and the JDL.

And yes Joe, I was there to get the screen shots:

I know you would be disappointed if I didn't.
Posted by Nosferatu200 at 22:06

if it was known where blood and honour held meetings how come there was no attempt to disrupt these meetings or was there?

Sometimes it is important not to reveal your hand. We got a lot of very useful information as a result.

oh I thought maybe you all were scared to go there because of how violent you say they are. was the big reveal you talked about a year ago called off because you decided against showing your hand?

those letters look like they were written by a five year old, which is consistent with the literary abilities of certain folks within the bonehead scene.

the home invasion was not suspected but verifiable

"oh I thought maybe you all were scared to go there because of how violent you say they are."

Are you so sure that people didn't go?

"was the big reveal you talked about a year ago called off because you decided against showing your hand?"

Sort of. I decided that it was best not to kill the golden goose for some short-term gain.