A few weeks back Carl Fleury in Alberta posted to Facebook announcing that he was the new head of the Alberta branch of the Canadian Combat Coalition and that they were recruiting in the province:

This might be somewhat awkward considering the CCC was originally founded by Ryan Dean from Alberta and that Dean had been ousted from his own hate "patriot" group by the Ontario branch:


Fleury's involvement in the CCC is also of some interest considering his participation in some of the early WCAI and and CCC rallies in Calgary when the CCC was lead by Dean.

To say that Dean didn't deal well with the coup and subsequent banishment from the group he founded and lead would be an understatement. And while he immediately formed another group with an equally ridiculous name (North American Freedom Fighters) it appears that he is unable to let the slight he feels go as the following video (which may also serve as a preview of the remainder of this post) indicates:


One thing Ryan Dean has become well known for is creation of fake web posts in an effort to undermine the people he feels have wronged him or the movement he is a part of. But becuse he is really good at making enemies across the spectrum, Dean is as likely to target his fellow bigots as he is anti-fascists with these often very transparent efforts.

Recently ARC received the following information from someone claiming to have dirt on Dan Dubois, the current leader of the CCC (based in Ontario) who initiated the coup that forced Dean out: 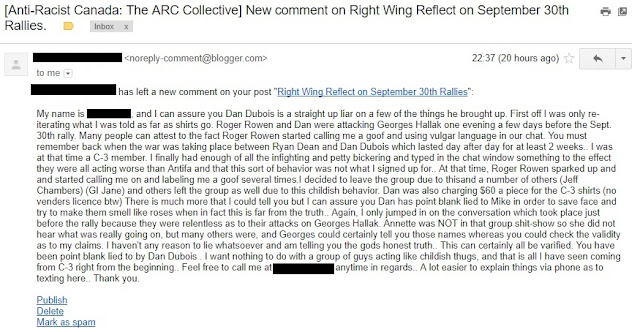 At the same time, direct messages allegedly written by Dubois and sent to Dean have been making the rounds online. In those messages Dubois tears down his ideological allies and makes overtly racist comments: 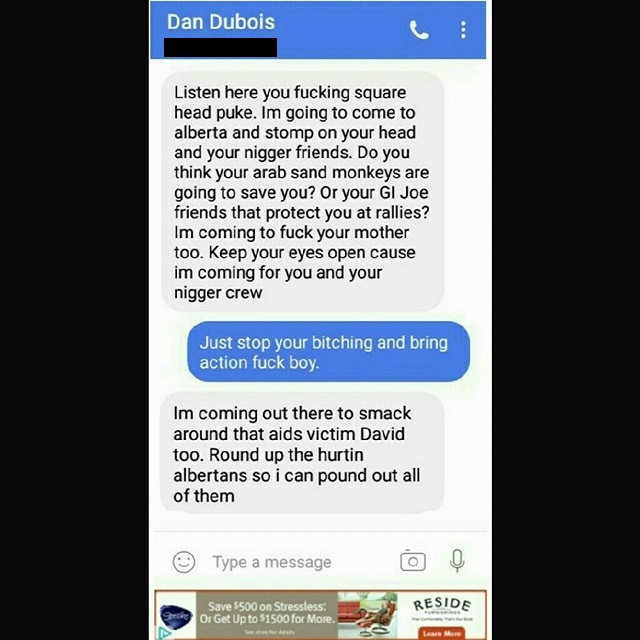 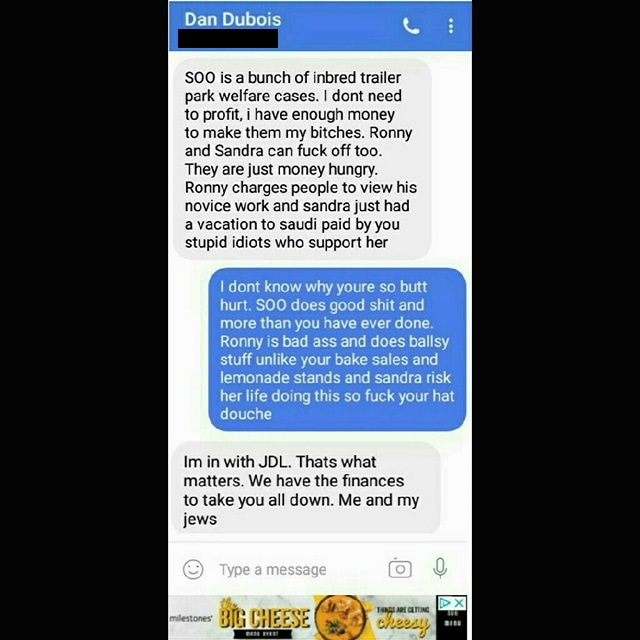 The thing is, it seems pretty clear that Dean himself is both the sender and recipient of those messages and that Dean further edited the screen shots to implicate Dubois: 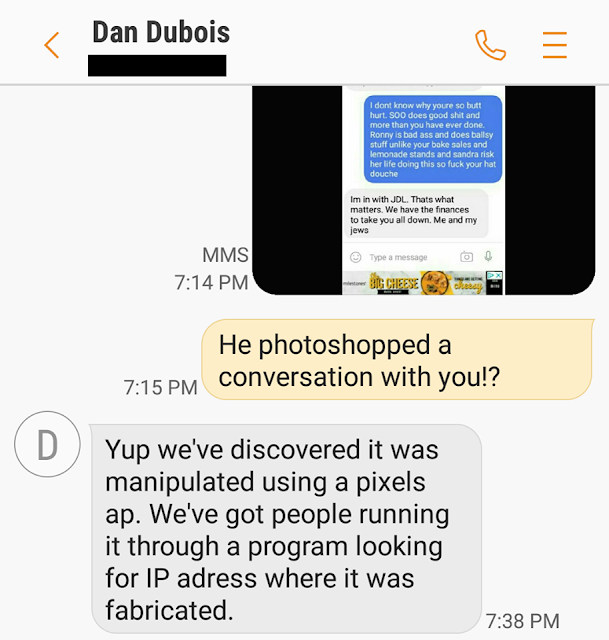 Dubois speaks about this in another video posted a few days ago:

Dubois' post on the subject resulted in the usual squabbling between CCC supporters and WCAI/NAFF members and allies that we have all generally come to expect: 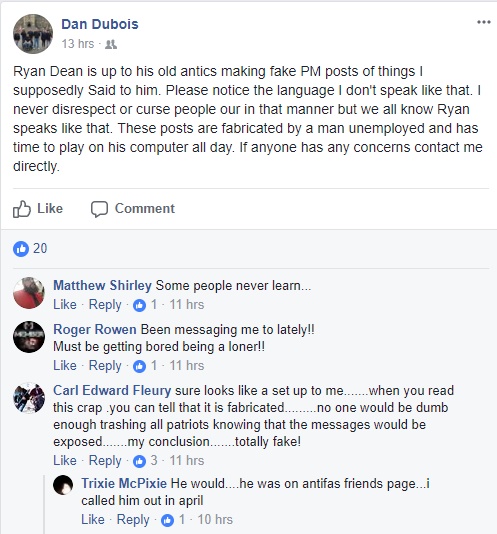 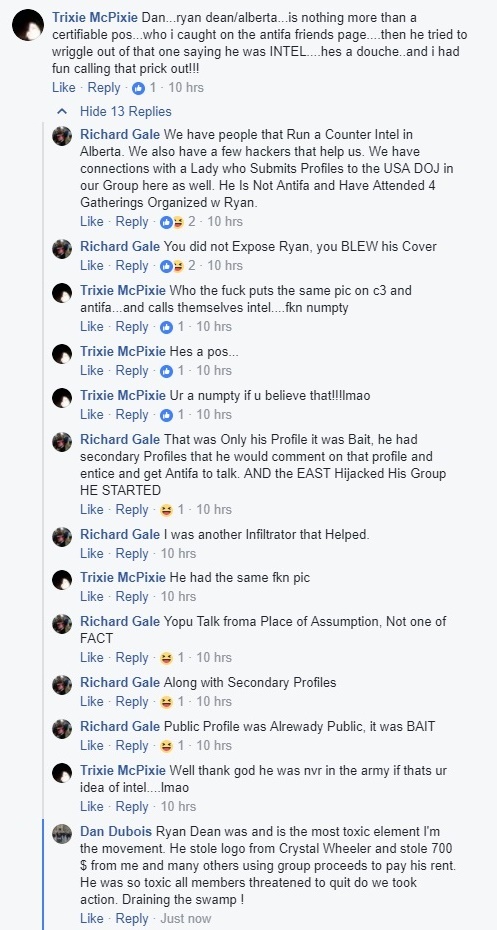 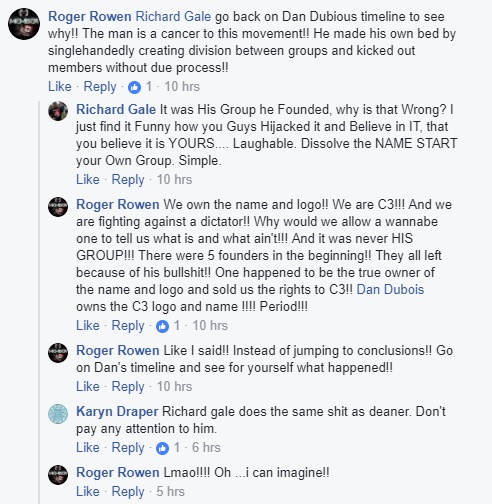 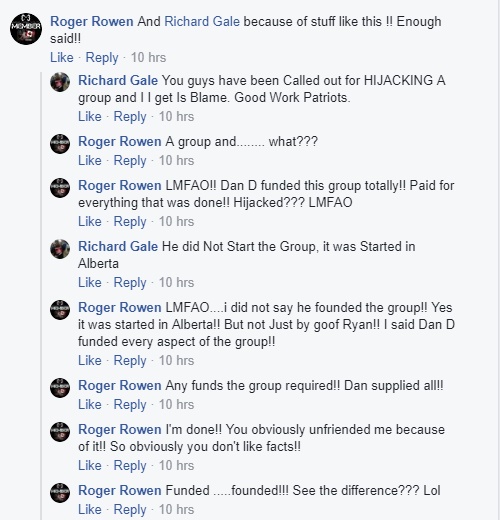 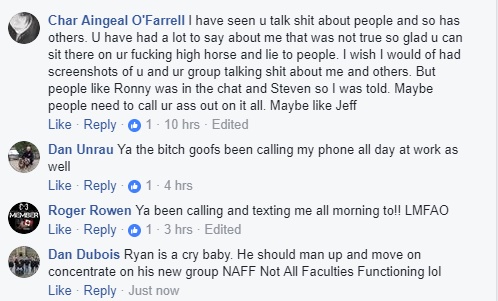 You know, I have to agree with Dubois' characterization of Ryan Dean as being toxic. I would also add that he is quite duplicitous and incredibly delusional.

A few months ago Dean contacted one of ARC's friends in Alberta regarding an event he and Joey DeLuca were planning in Calgary. Would you believe Dean tried futility to convince anti-fascists in Alberta to support their efforts? The exchange is rather surreal Dean tries to argue that anti-fascists should "hug it out" with Dean, DeLuca, and company and that this action would cause the Liberal government to tremble with fear.

I mean, I guess. He's really never been entirely clear on what he actually wants to accomplish.

Dean grows increasingly hostile in the exchange as the anti-fascist he contacted throws ice water on Dean's efforts which then results Dean making veiled threats. Dean also claims that Dubois did NOT kick him out of the CCC and that Dean had rebranded since the Canadian Combat Coalition had a "bad name."

The following is that exchange which ARC has been given permission to publish: 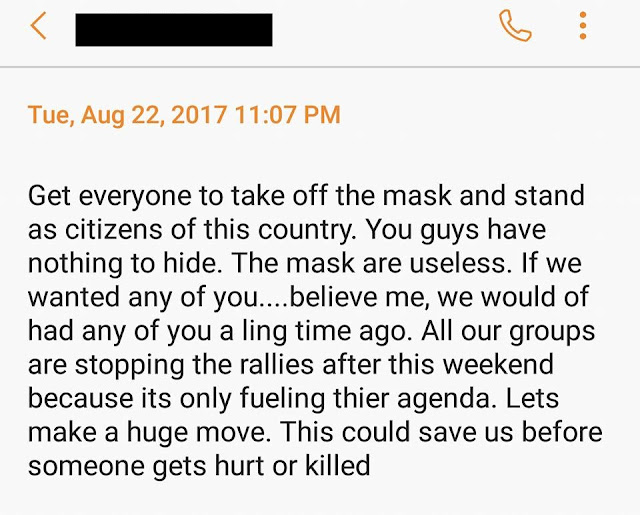 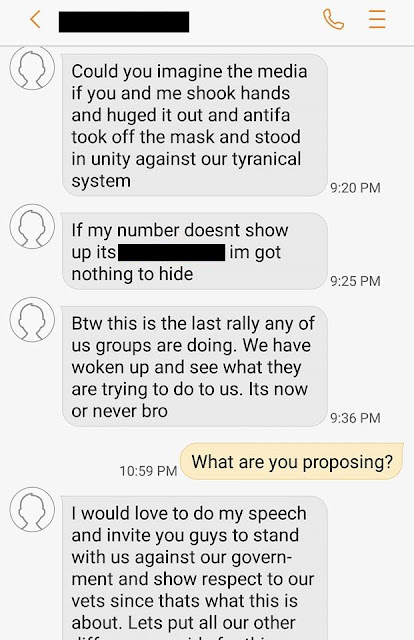 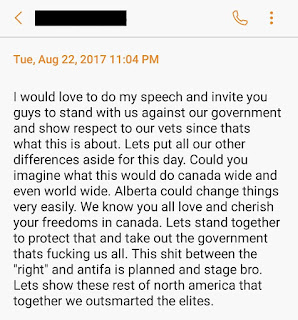 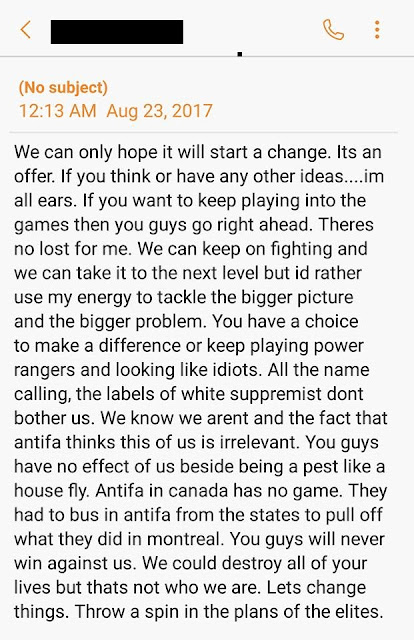 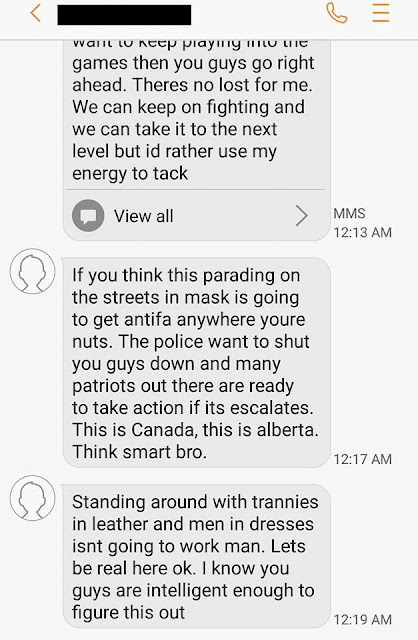 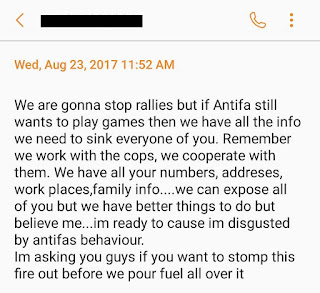 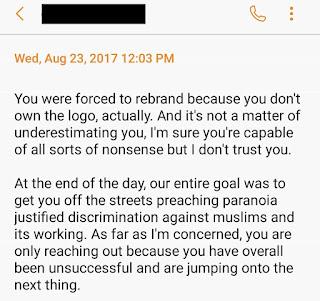 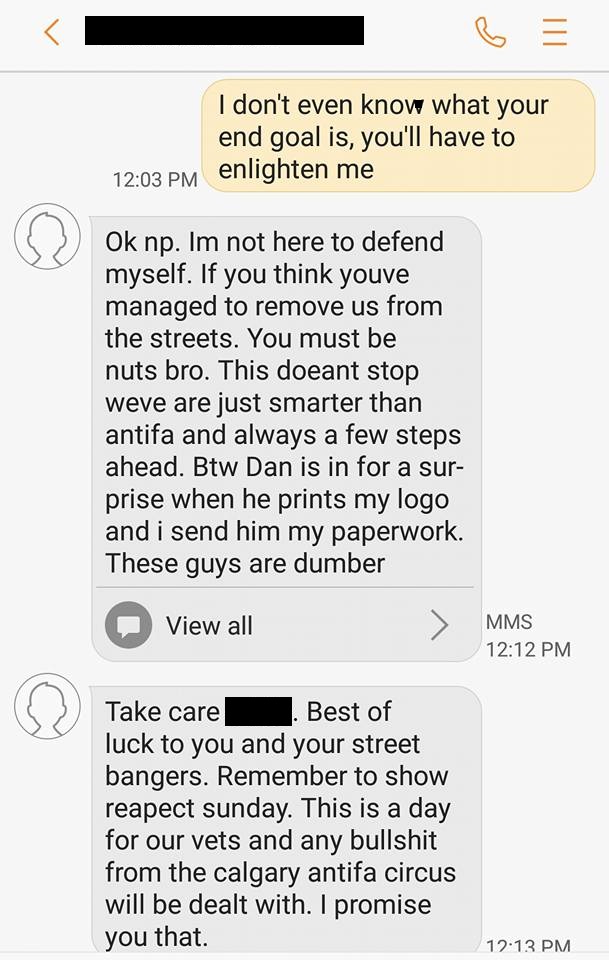 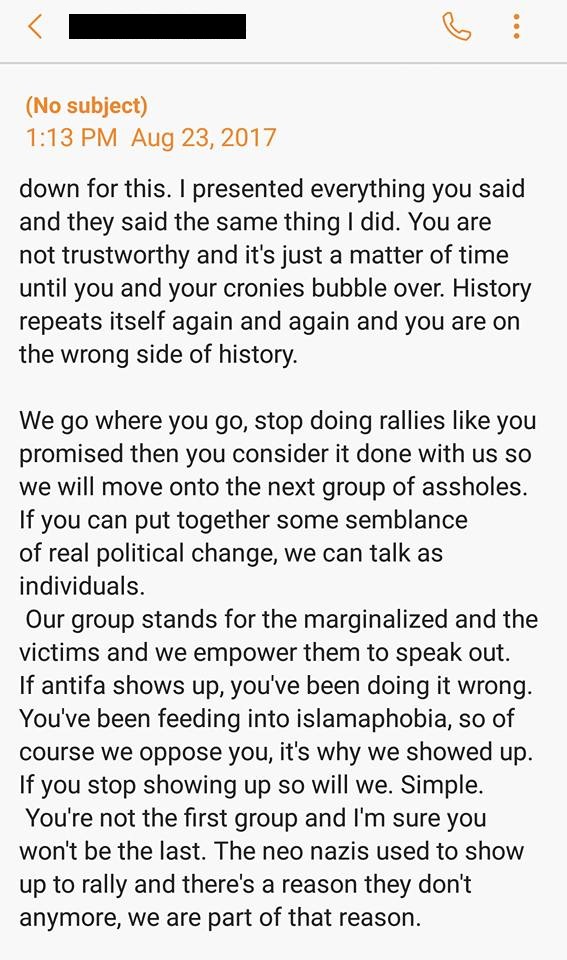 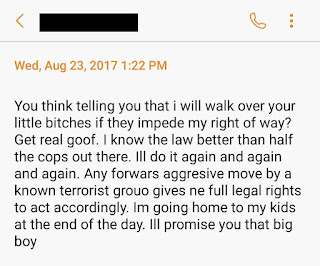