Alternative title 1: "The Kids Are Not Alright (But Are Alt-right)"

Admittedly, the bigger story regarding Ezra Levant's alt-right "Rebel Media" is the revelation that despite claiming the Conservative Party of Canada was cutting ties with "The Rebel," party leader Andrew Scheer has in fact tasked former corporate executive Hamish Marshall with running the Conservative election campaign and that he had been involved in Scheer's campaign for party leader while still working at "The Rebel":

Looks like The Globe is preparing to report that Scheer's campaign manager was working out of The Rebel office *while running his campaign*: pic.twitter.com/wxrLjMQpwm
— Jonathan Goldsbie (@goldsbie) October 16, 2017

A month ago @AndrewScheer he said he wouldn't do interviews with The Rebel. Now they're running his campaign.  https://t.co/le3cw16gDK
— Gerald Butts 🇨🇦 (@gmbutts) October 20, 2017

Why did Jesus Scheer lie about distancing himself from bigoted Fake News Rebel when he hadn't? Where's the MSM outcry? Oh..... #cdnpoli pic.twitter.com/1dbOMSziCA
— FranklyMyDear (@MrDash109) October 21, 2017

Wow, this is a pretty damning depiction of Andrew Scheer as being either wilfully ignorant or dumb as a sack of soup https://t.co/cDifNSpl0s
— CC (@canadiancynic) October 21, 2017


However while this is going on, a minor drama is going on between two of "The Rebel's" former journalists correspondents reporters propagandists: 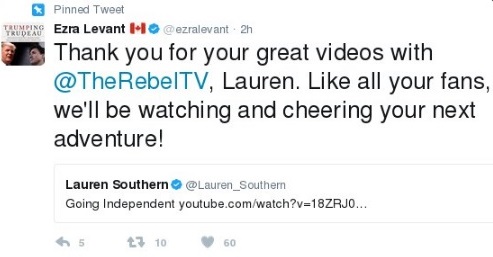 Lauren Southern left "The Rebel" suddenly and under rather mysterious circumstances. Little was known until another former personality for the website, Caolan Robertson, posted a video allegedly exposing Levant's efforts to essentially buy his silence. In the audio of the meeting with Levant, Robertson's partner also recorded Levant talking about how Southern was being smart by not causing waves after her departure suggesting that despite how it looked publicly, she didn't leave "The Rebel" on the best of terms.

This revelation came about at a rather difficult time for Levant as the events in Charlottesville and then "Rebel" personality Faith Goldy's association with the tragedy resulted in an exodus from the alt-right vehicle:

Around this time this screen shot also started floating around:

ARC didn't post this then (or the one purporting to be from Levant which was also critical of Southern) because it didn't pass the smell test. I mean, I just can't see Gavin McInnes being worked up against someone who held antisemitic views because.... well.... he sort of has a bit of a recent history of that accusation being leveled against himself:
The other reason why it didn't, and still doesn't, seem to be legitimate is because of the really ugly sexual slur directed at Southern. Now, I'm not suggesting that McInnes wouldn't use that word to describe women, because I have a feeling he would (you know, free speech and all that). But as Southern had been a recent member of "The Rebel" family it didn't seem like something a then personality for the website would say about a former colleague no matter what the nature of her departure might have been.

Hold that thought for a moment.

There's another former "Rebel Media" correspondent who we need to take a look at now:

Laura Loomer's most infamous publicity stunt while working in for "Rebel Media" was when she arrested for rushing the stage during a (for some reason) controversial adaptation of "Julius Caesar" (another now former "Rebel Media" employee, Jack Posobiec of "#pizzagate fame, filmed the incident). The thing is though, the whole thing appears to have been pre-planned:

Things began to sour between Levant and Loomer when the former ordered her to stop stalking Hilary Clinton at her book signings. Under normal circumstances I think that Levant would be happy with the controversy Loomer's actions would generate as it is red meat for the American right-wing audience he craves. However, as already mentioned earlier, Levant had become a little gun shy. Unlike Southern who was shown the door, Loomer quit in a huff:

I have parted ways with @TheRebelTV and look forward to what the future holds.
— Laura Loomer (@LauraLoomer) September 24, 2017


I didn’t want to stay in a situation that was aggravating me and pissing me off, so I resigned. I’m not going to play the victim. I didn’t agree with what they were telling me to do, and I don’t agree with the policy.

Since then Loomer has continued to harass Ms. Clinton at book signings as well as claiming to investigating the horrible tragedy that occurred in Las Vegas (hint: it was a conspiracy with more than one shooter and no doubt she will determine the Clintons, Obama,  "deep state" false flag operators, Muslims, George Soros, or a combination of all of these were culprits). And no, I'm not kidding:

For those of you who are offended by this, TOO BAD! I'm offended by all of the terrorism and radical leftism that the Soros family pays for. https://t.co/XwJMH93O3E
— Laura Loomer (@LauraLoomer) October 19, 2017

However prior to all this and while still working for Ezra she was also getting caught in transparent lies:

I mean, come on! Who you think you're fooling with THAT?

Now that I have set the table and introduced the guests, it appears that should one day there be a "Rebel Media" family reunion, Ezra might not want to use the good china as Ms. Southern and Ms. Loomer might start throwing plates at each other: 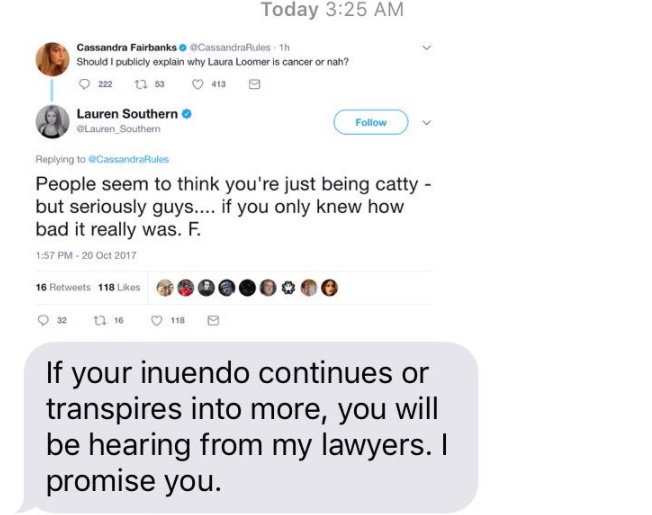 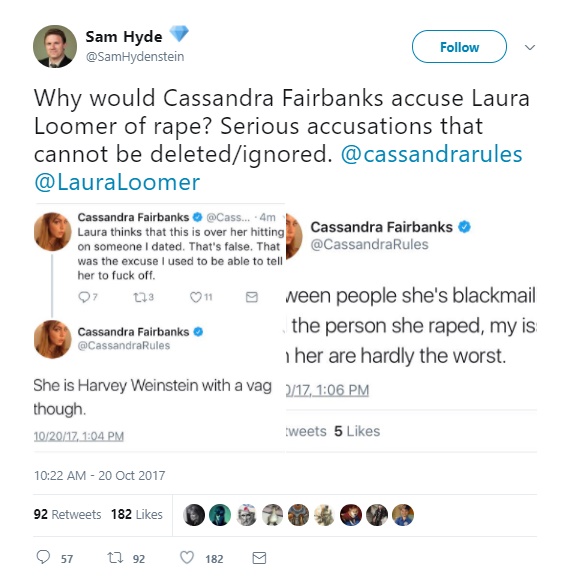 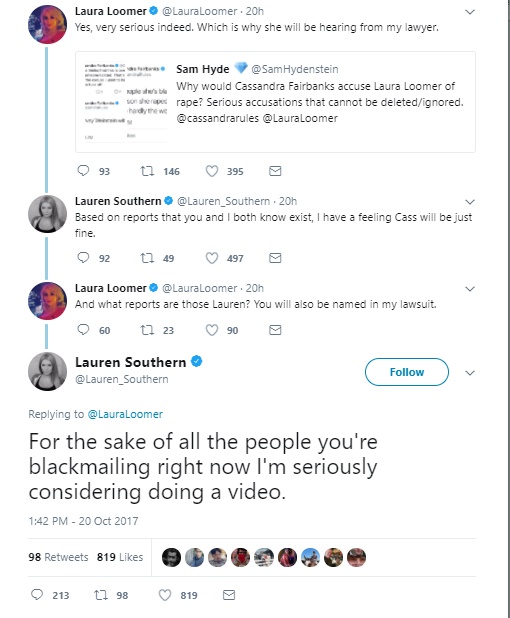 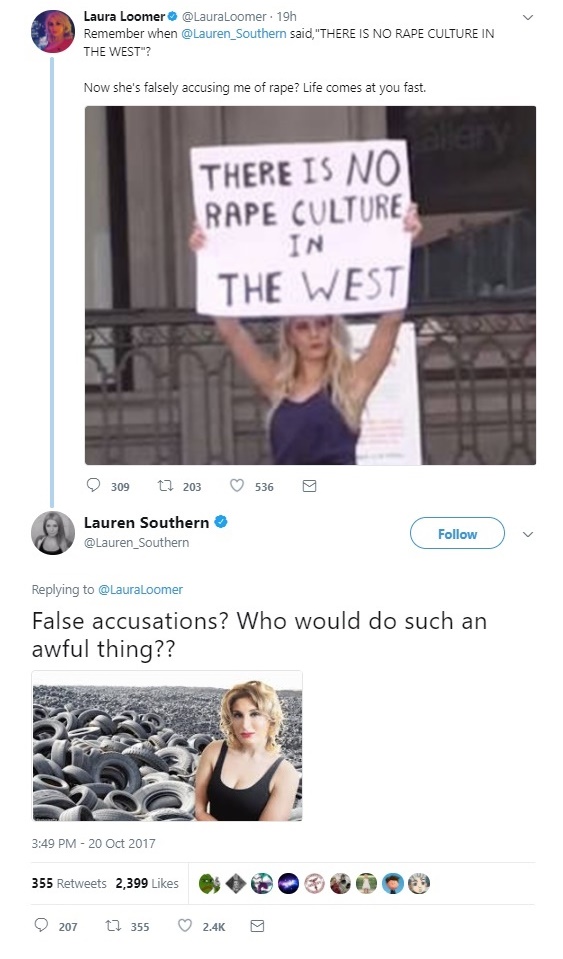 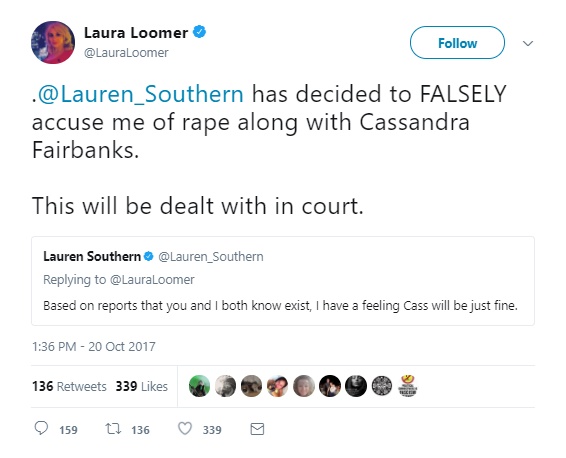 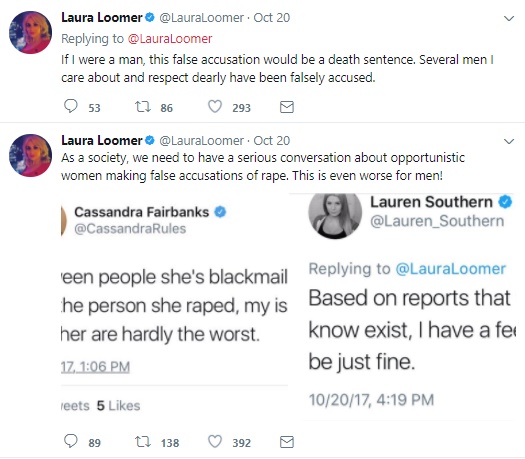 And the denouement of our brief drama? 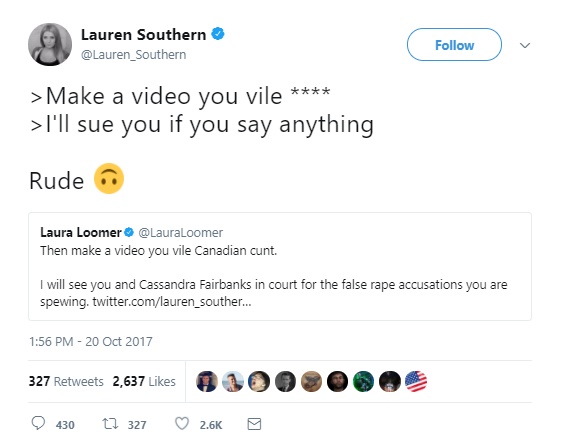 Sort of makes me question the validity of the McInnes tweet just a wee bit (though I'm still 95% certain it is fake):

And sure, these screen shots are slightly out of order, but I think it lends a little more interest to the tale.

Lauren posted the following on Saturday: 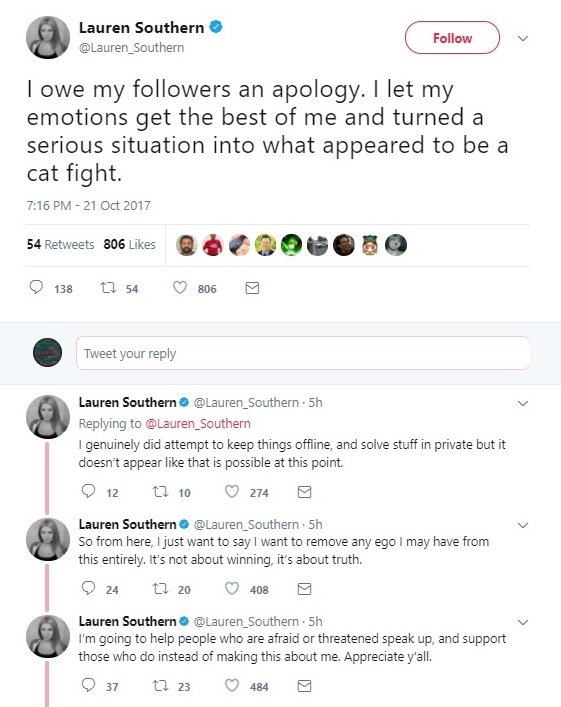 Oh! Now Lauren has gone all altruistic on us?

I'm sure that Lauren will eager help people who are afraid to speak out about sexual violence given her past sensitivity regarding the subject: 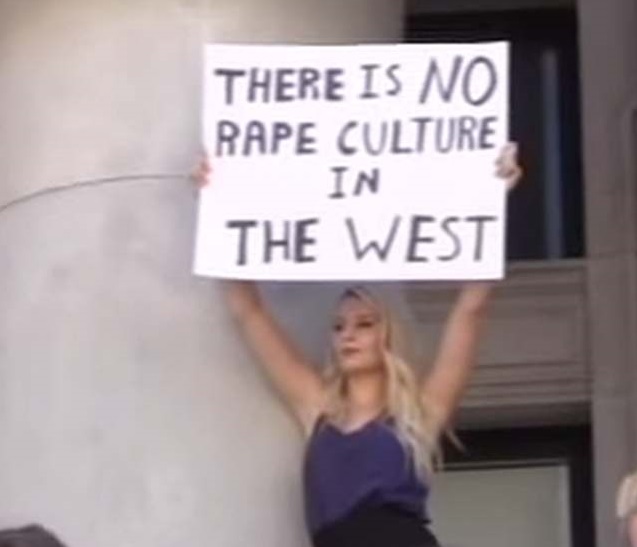 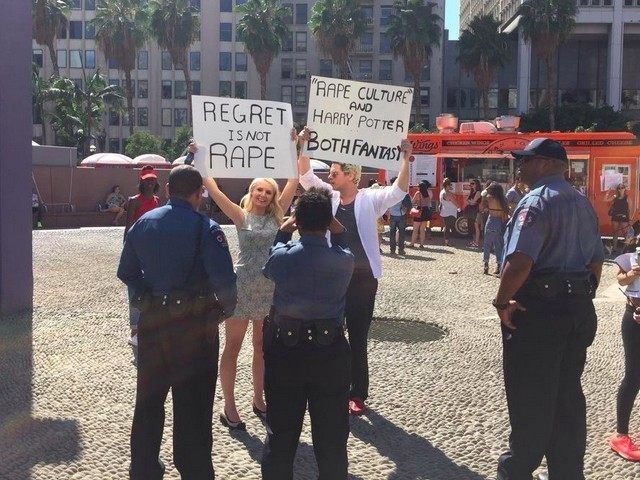 Now there's further back story to all of this involving Loomer being kicked out of a Facebook group, a MAGA Halloween Party being planned, love triangles, and a lot of other shit and shitty people I TRULY don't care about. Suffice it to say that just as the Islamophobes, anti-refugee, and outright racists can't get along, neither can the people who agitate them with their propaganda.

I will end with a question regarding some of these past "Rebel Media" personalities.
I could probably go on. I mean, I haven't even touched on Tommy Robinson or Sheila Gunn Reid or really almost any of the other personalities who are still with "Rebel Media."

But is it possible that many of the people who have been employed by Ezra Levant on "The Rebel" are irredeemably horrible misanthropes?

ARC will investigate the conspiracy and bring you the real truth. Just be sure to sign our petition and contribute financially to our work. ;)
Posted by Nosferatu200 at 11:30

The MSM is a joke... they've been crucifying Trudeau and Morneau over tax reform, while maintaining total silence over Scheer's ties to Rebel and his elevation of a Richard Spencer wannabe in Rona Ambrose's riding.

This should be national news and Scheer should be called on the carpet for it. Levant wants to be Bannon of the North, and the press is complicit in aiding and abetting his road to get there.

Hamish Marshall, really awful guy. More and more people need to be talking about him a lot more. Believe me.