As we saw on September 30, many far-right groups across Canada tried to rally against “illegal” immigration but ended up gathering only a handful of protesters, largely outnumbered by anti-racist activists. Everywhere except in Québec. In Québec, the groups gathered at Saint-Bernard-de-Lacolle, at the border between Canada and the US, and managed to attract over 200 people protesting the influx of immigrants that had come to Canada over the past months. There were around the same number of counter-protesters and also a large police presence there, and the organizing group, Storm Alliance, considered the Québec rally a big success, which was not the case in the rest of Canada.

Most of the groups active today started in late 2015, following the Syrian civil war and subsequent refugee crisis in the Western world. Some of them are chapters of other groups, like the Soldiers of Odin and PEGIDA, but most of the big groups of the moment were founded in Québec, starting with La Meute: 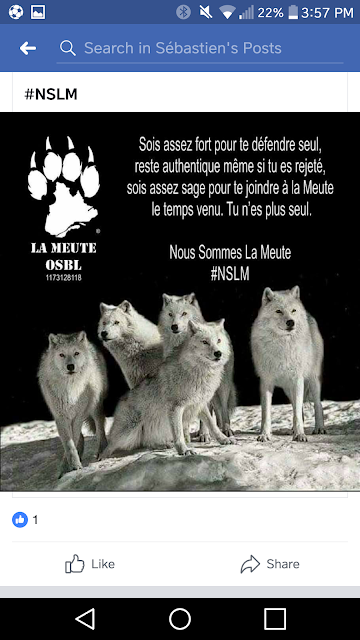 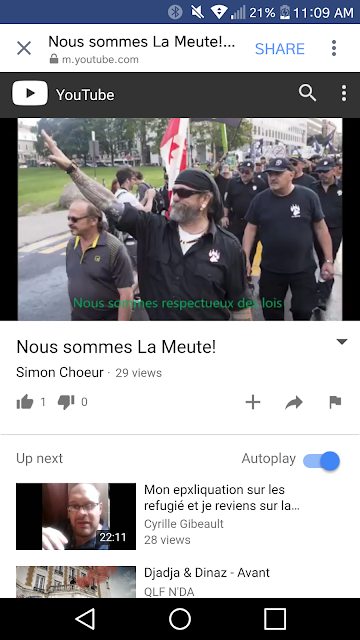 The bulk of their activism is anti-Muslim as they are afraid of Canada and Québec in particular becoming “like France,” which they see as having been taken over by “Islamists.” They are managed in a militarized way, with different ranks having different colour wolf paws on their Facebook profile photos and with 17 different sub-groups, or Clans (lol), one for each administrative region of Québec. They also have an English section (formerly managed by Shawn Beauvais-MacDonald, of Charlottesville fame) as well as a France chapter. They started having rallies in the spring of 2017, when they gathered in Montreal against M-103. They believe that the anti-fascists who come to oppose them are pro-government and pro-Sharia because they can’t fathom being against Islamophobia and against authoritarian governments at the same time. They rallied again on August 20 in Québec City, where they gathered in an underground parking lot that was surrounded by anti-protesters. They had to wait for hours for the opposition to leave so they could walk silently around the block for a while. They still claimed the moral victory (which the media also gave to them) because they didn’t break anything or hit anyone, unlike “antifa” who had to run around and organize against police and actual Nazis protecting the perimeter: 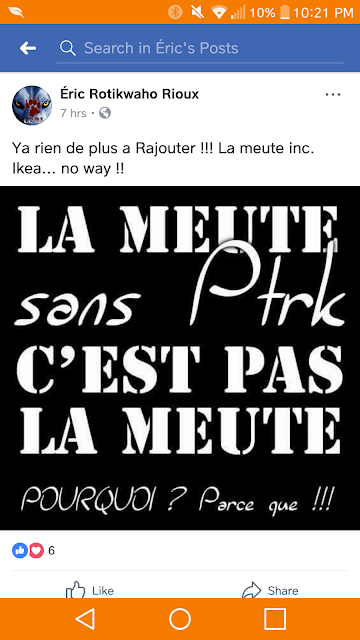 They have also been known for organizing against a small town’s proposal of a Muslim cemetery, to harass government employees to try to get the right to wear their Meute hat on their RAMQ card’s photo, to joke about killing MPs, and various other things. They claim to have 60, 000 members but they count members from the general Facebook group plus all the small regional groups together even though there are clearly duplicates (even better, the administrators are in every group, so this is clearly an inflated number).

Since the beginning of September, La Meute has been plagued by a lot of internal infighting. Corvus had already left some months prior, and then Stéphane Roch, Sylvain “Maikan” Brouillette and some others changed the passwords, kicked Beaudry out and formed a for-profit company called Nous sommes la meute (we are La Meute). They were angry at Ptrk for using his personal company to sell their merch and for the money not being accounted for. Some members remained loyal to the former leader and we also saw members move on to another group with the same values, Storm Alliance. 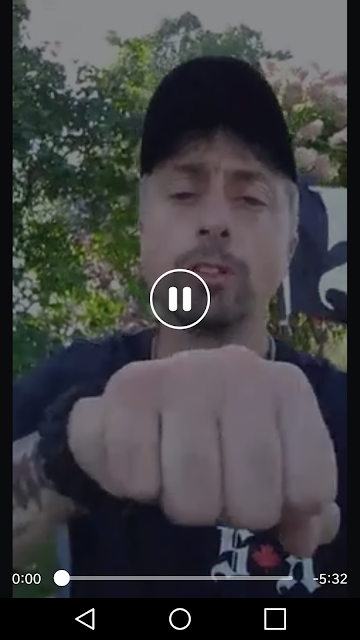 They are also divided by regions, with presidents and vice-presidents but they try to have a better public image than La Meute by saying they stand for Canadian values and the Charter of Rights, instead of against Islam. They organized 2 events at the Québec-US border, one on July 1 and one on September 30, against refugees. They were hoping for a coast-to-coast rally all over the border in most provinces, but as you know, it only really worked in Québec. La Meute was also part of that last rally, even though there had been some beef between the two groups in the past months. Storm Alliance also invited themselves to an environmental rally in Québec City in an effort to become more mainstream (no one seemed to care about the cause, they just wanted to clash with "antifa"): 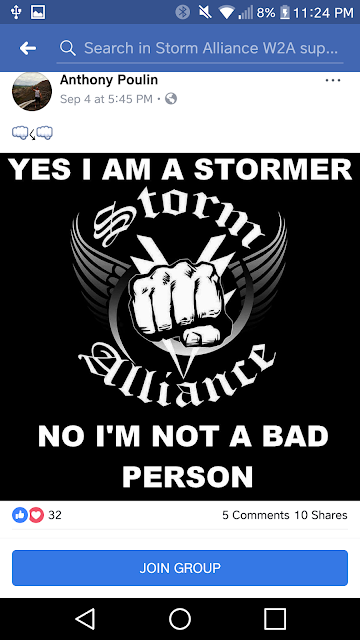 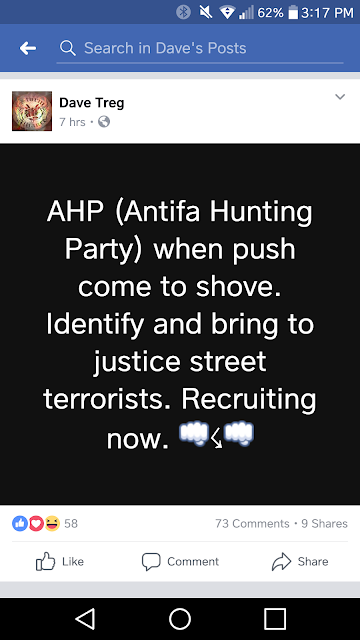 After telling his members that it was cancelled, Treg went with only a few select SA members that he calls DFSA for Defense Force Storm Alliance and/or Don't Fuck with Storm Alliance. They stayed on the margin of the march, with their SA clothes covered, and then went to a restaurant and took a photo together, wondering where the "antifa" even were: 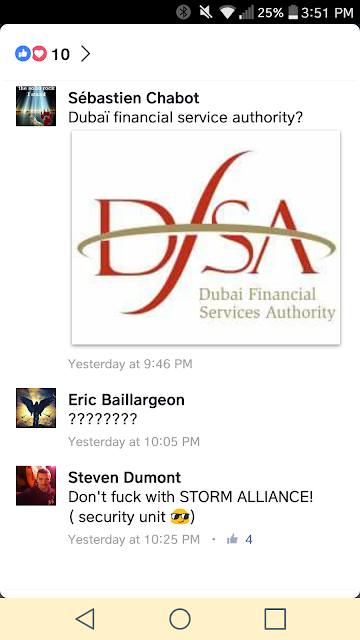 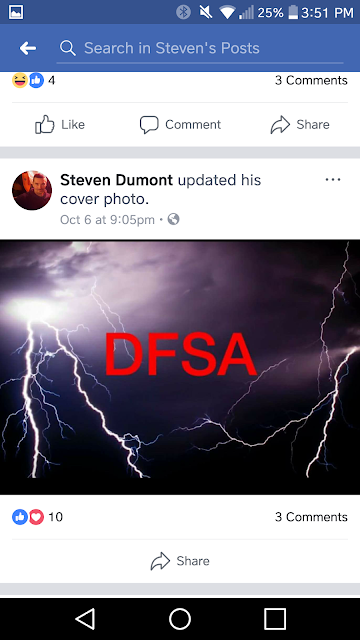 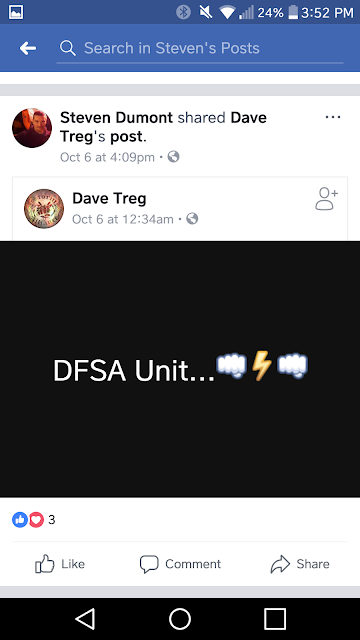 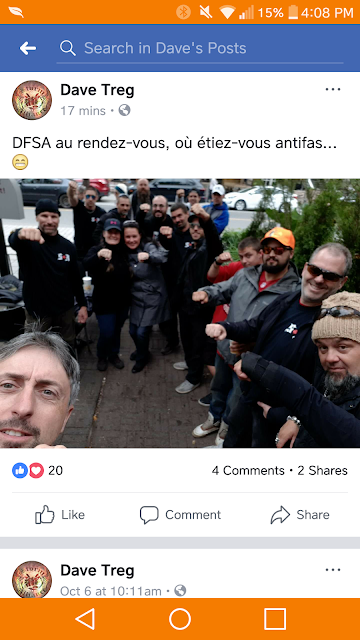 Now they are planning a rally in Québec City together on November to protest the government commission on systemic racism: 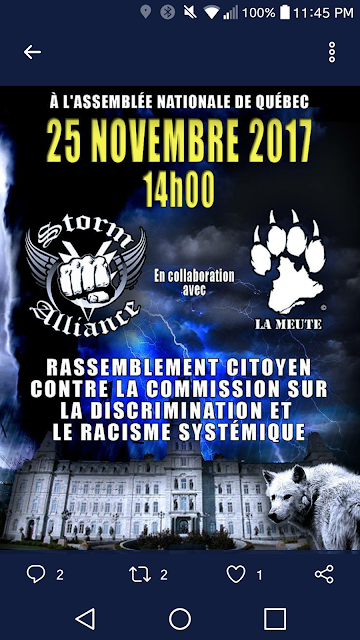 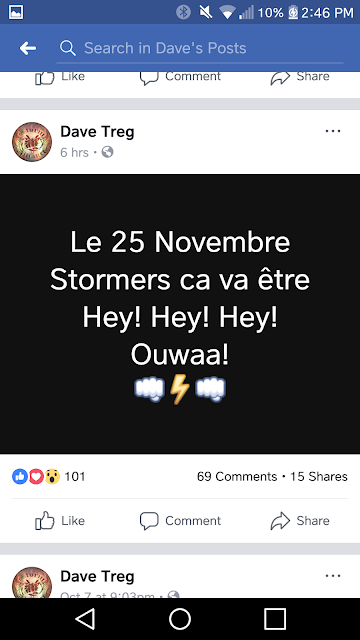