Outside of Quebec where the Storm Alliance and La Meute were able to muster as many members and supporters as the anti-fascist counter protesters, the protests planned by the far right for Saturday were mostly a bust. In some cases such as Hamilton, the event was called off before it began. Other cities, Regina, London, Edmonton, and Windsor for example, had so few far right protesters they could hardly be considered events. In the case of the St. Stephen border crossing in New Brunswick, the protest was both cancelled and moved where, in Fredericton, less than a handful showed up; those that did were outnumbered by counter protesters.

Actually, being outnumbered by counter protesters was sort of the theme for the other events that took place.

Before I continue further, there are a few points that need to be addressed concerning the Ottawa protest by CCCC, Proud Boys, and Northern Guard members and supporters as well as the larger contingent of counter protesters. The numbers I've received concerning numbers are that there were perhaps 25 or so far right protesters compared to 150+ counter protesters. The first issue is a claim that an "antifa thug" assaulted a child. A representative sample of such comments making the rounds on social media are as follows: 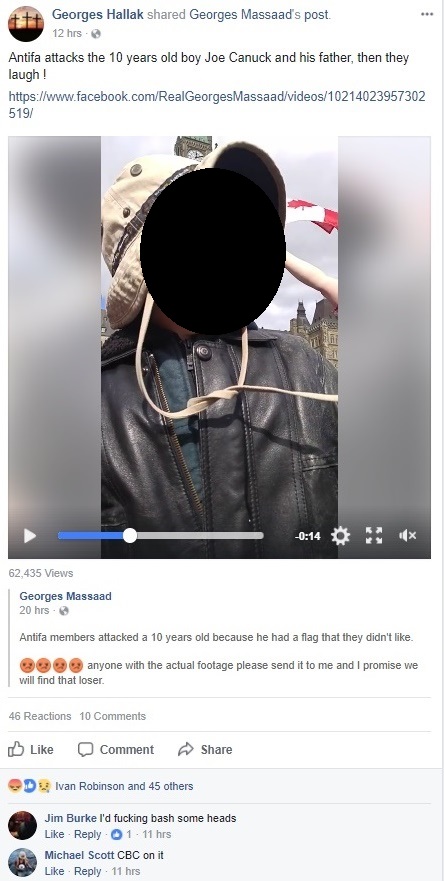 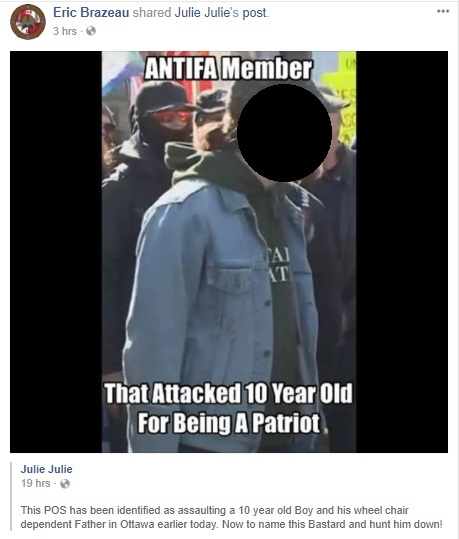 The reality is considerably less dramatic.

During a rather chaotic scene before police got between the groups, there had been some pushing and shoving taking place between opposing sides. At one point a counter protester went to take a sign that had been placed on the ground. A man, father of the 10 year old boy in question, tried to prevent the sign being taken by stepping on it. The counter protester appears to have pulled the sign out from under the far right protester sending him head over ass. During all of this, the child was 10' to 15' away. One of the far right supporters inadvertently captured the incident on film and posted it to YouTube before being told the of the narrative the Islamophobes were crafting in order to use the child as a propaganda tool to demonize the anti-fascists:


So no, "antifa thugs" did not assault a 10-year-old child nor did they snatch a flag from his hand. 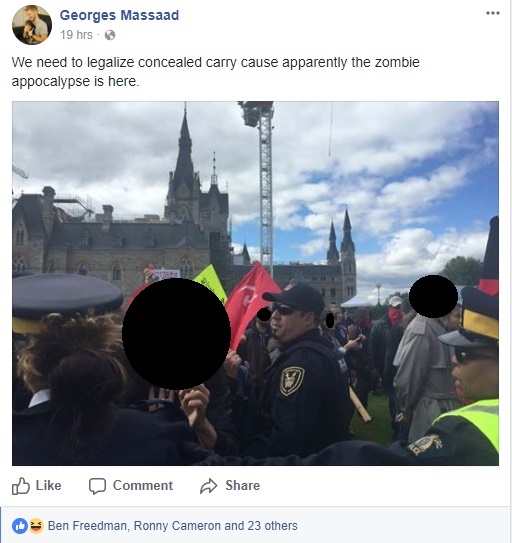 The second issue concerns incidents of violence that occurred at the protest. While there was pushing and shoving that took place, the far right members are contending that it was the "antifa thugs" who were violent. However only the far right are known to have had at least one individual appear with a weapon:

The person in blue is Brandon Wallingford, a member of the Proud Boys and someone who's name was included in a recent guest article posted to the blog: 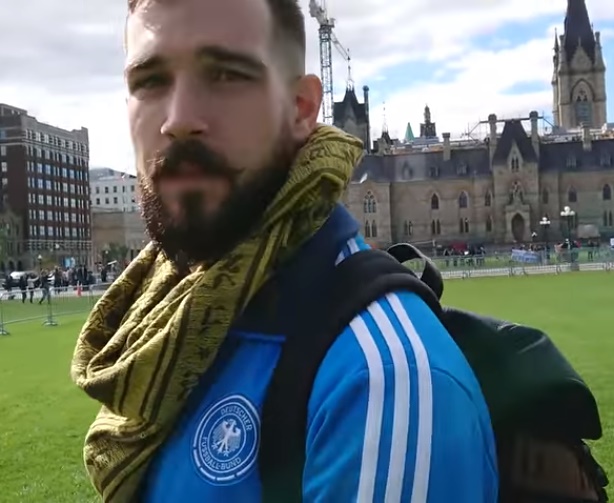 In addition to this incident, other members of the Proud Boys are claiming that anti-fascists initiated a fight and as a result were beaten up as an act of self-defence. The video that was posted by a Proud Boy supporter (or member) shows part of the encounter, but conveniently leaves out the beginning where the anti-fascists are alleged to have been the aggressors:


At the beginning of the video two individuals, a male and female, appear to be in a struggle with a larger group of Proud Boys as Georges Hallak records the what takes place. At one point in the video Hallak claims that they were "jumped" but as there is nothing to substantiate the claim other than his word.... and considering the lies being told about "antifa thugs" assaulting a 10 year-old, Hallak's word can be called into question. It also appears that the Proud Boys enjoyed the encounter more than victims of an unprovoked attack perhaps should: 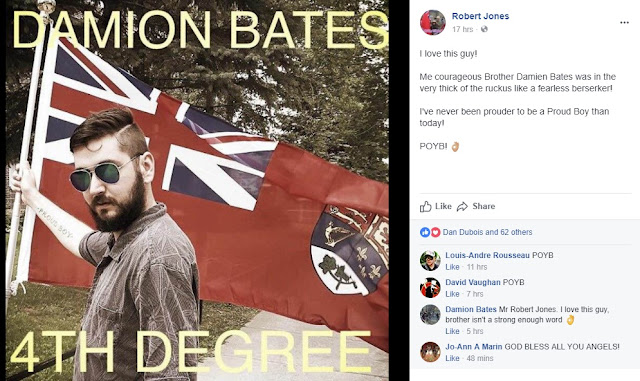 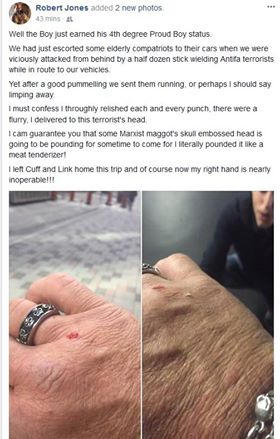 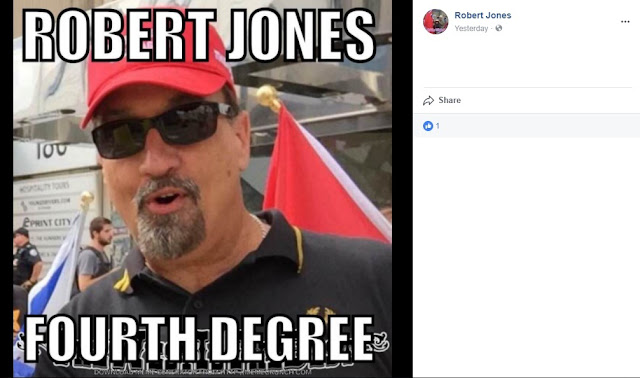 Robert, do you understand the concept of arrested development? Or maybe dignity? 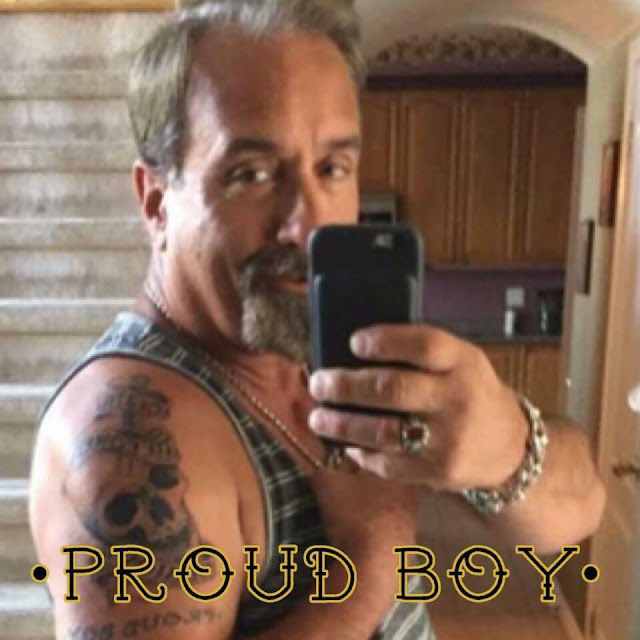 So that would be a no then?

In any case, given the lie about assaulting a child, I'm not necessarily willing to give Hallak and the Proud Boys the benefit of the doubt regarding their story about being "jumped."

Now with all that out of the way and as already stated at the start of the post, any objective person would view the protests that occurred on Saturday as a failure. One person who recognizes this, Mike Treherne of Alberta seems to recognize this and lays the lion's share of the blame on Georges Hallack as well as Storm Alliance member Colin Olear (who seems quite unpopular in general). In a Facebook Live call-in show that Treherne produces every now and then, he revisits t-shirtgate and the tyranny of dress codes for "patriots." Later he receives a number of calls, two of which will be addressed later:

In addition to trashing Storm Alliance and Colic Oleary, Treherne suggests that there be a council of group leaders to coordinate rallies and that they start holding their events in arenas that could hold more than 20,000 people.... keeping in mind the numbers they gathered across the country didn't manage to break 400, and that is probably a generous number on my part.

The first call he received was from Canadian Combat Coalition leader Dan Dubois who seems to think that their absence from the Ottawa event actually constitutes a success story in that others headed his call to boycott the event because of the clothing issue. He further suggests that the presence of the CCC in their "uniforms" would have so intimidated the counter protesters that they would have never have been a problem.

Yeah, these guys are certainly an intimidating bunch:


Treherne then takes a call from Kevin Goudreau who no-showed his own event. Ever the delusional crank, Goudreau tries to explain how he actually won a great victory and that the counter protesters played into his hands. This sentiment is echoed, and contradicted, by Goudreau himself on both Facebook and Twitter: 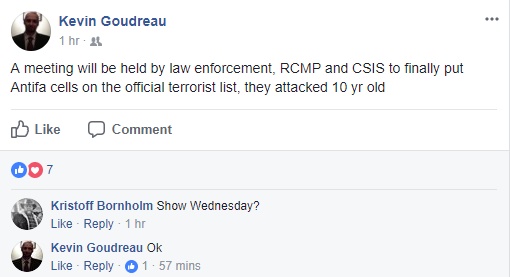 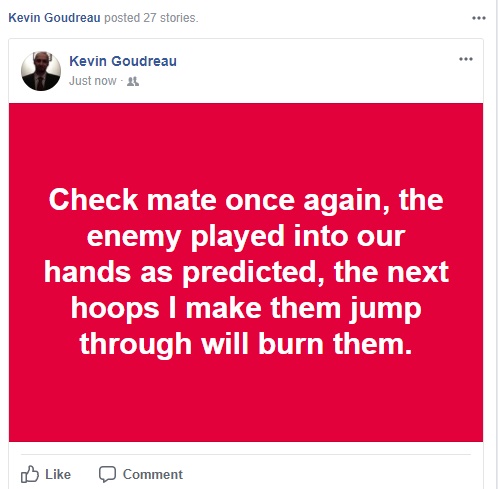 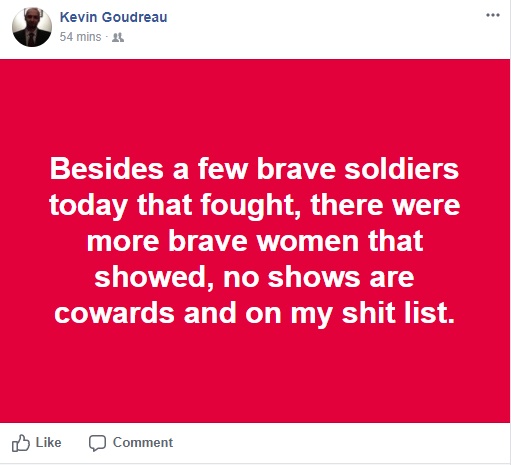 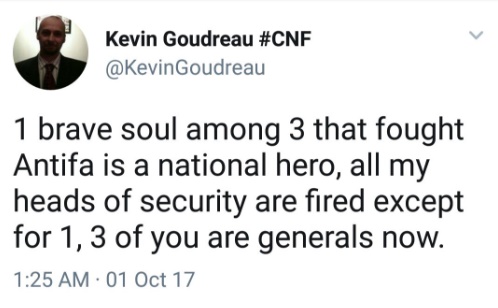 This, ladies and gentlemen, is the current state of the far right in Canada outside Quebec. Disorganized, demoralized, and at each other's throats. And I've been hearing that the situation in Quebec in spite of their numbers isn't exactly peaches and cream either. As the weather starts to turn and even though Ronny Cameron is planning an event for Toronto, I think things will be pretty quiet on the streets pretty soon.

That's not an invitation to become complacent though.

The worry I have now are those who have decided rallies are a waste of time and are now working together offline with plans more dangerous than a couple of dozen idiots showing up at a rally.

More on that concern soon.
Posted by Kurt Phillips at 18:33