I've been away on vacation (thanks George Soros ;) and only returned to Canada yesterday, but I thought this would be an appropriate time to mention that ARC and Rabble.ca are currently collaborating on a project:

We are partnering with the Anti-Racist Canada: The ARC Collective for the next #stophateca roundup to focus on the Islamophobic organizing in Quebec. Please send contacts and any information you think would be useful in regard to digging into Islamophobia in Quebec to #stophateca or to toolkit@rabble.ca.

To be fair, Ms. Bhullar is being very kind in characterizing this is as a partnership, as Rabble is in my view doing most of the heavy lifting and has already put together a valuable resource that will grow over time. I would ask ARC's readers to closely follow Rabble and the ongoing project.

In the meantime, while I was away this happened:

Police have charged one man after Ottawa’s central mosque on Northwestern Avenue and the Islam Care Centre were hit by vandalism this week.....Investigators were able to confirm that windows were broken at both the mosque and care centre and then arrested the man. Police allege that the man assaulted one of the arresting officers.

Shawn Le Guerrier, 27, has been charged with two counts of mischief and one count of assault police.

ARC received information about Le Guerrier which suggests that he subscribes to white nationalist beliefs and runs in a crowd that advocates violent confrontations with antifa: 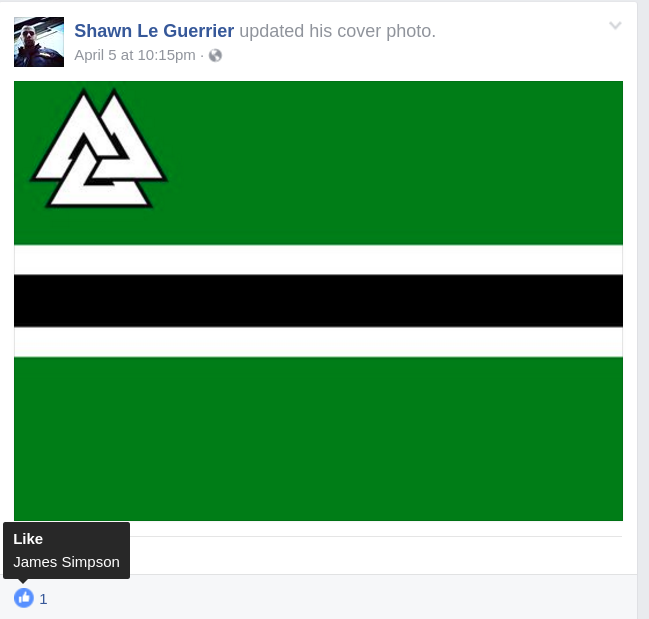 Of further note, Le Guerrier is a member or supporter of the Ottawa chapter of the Soldiers of Odin: 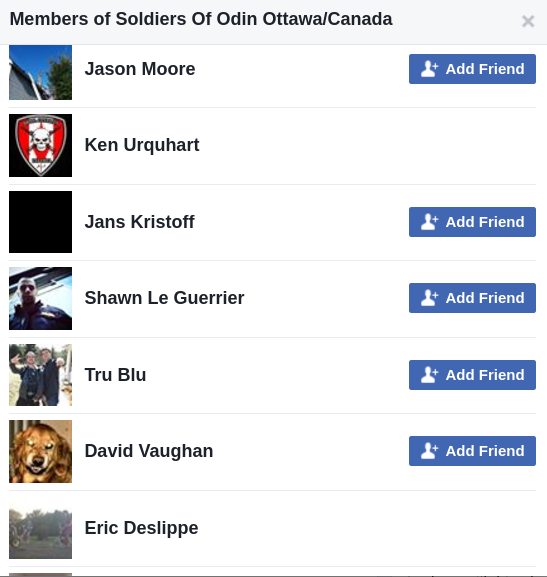 I should further mention that this is actually the second time Le Guerrier has targeted the same mosque in as many weeks. Interesting that the "law abiding" SoO didn't give Le Guerrier the boot the first time.... unless they perhaps tacitly approved of the vandalism? And perhaps not coincidentally, the same mosque was also the target of an attempted arson.

This isn't of particular surprise to those of us who follow the SoO in Canada. Members of the SoO in both Ontario (at least those who have attended the anti-Muslim events in Toronto), Calgary, and British Columbia have become increasingly aggressive and confrontational and the level of anti-Muslim vitriol is increasingly hysterical and unhinged. ARC and others have reported on the large number of white supremacists who have joined or who are supporters of the Canadian organization, as well as their refusal to disavow the Finnish parent chapter in spite of the founder's overt ties to a violent neo-Nazi group and his (and others) numerous arrests for racially-based assaults.

Or, at least the once refused to disavow Finland. Seems things have changed:

Thus far we haven't heard anything from Joel Angott, but at this point there seems to have been a coup which has ousted SoO National President and founder Angott and has resulted in convicted grow-op operator with what appears to be a recent domestic violence charge hanging over his head Bill Daniels becoming the new Grand Poobah.

I can't help noting that for more than a year ARC has provided ample evidence that Mika Ranta was a racist and antisemite, but that evidence, as well as evidence that racism and Islamophobia was a feature and not a bug within the Canadian chapters, was continually dismissed and ignored by the SoO leadership. It also seems that the break with Finland light have less to do with the Canadian membership's sudden understanding of the nature of the Finnish SoO and more to do with financial concerns. Finally, despite "learning" that there are < gasp! > racists in the SoO, the Canadian chapter insists they will continue to use the SoO name. That's sort of like a Klan chapter breaking way after learning, to their horror, that the Klan is a racist organization but still operating under the same name because.... really.... who the hell knows at this point?

I guess it's about branding.

In the meantime, the new national leadership of the Canadian SoO might want to let their remaining membership know that they are now pretending to be completely opposed to racism within their ranks, because some of them don't appear to have received the memo as yet: 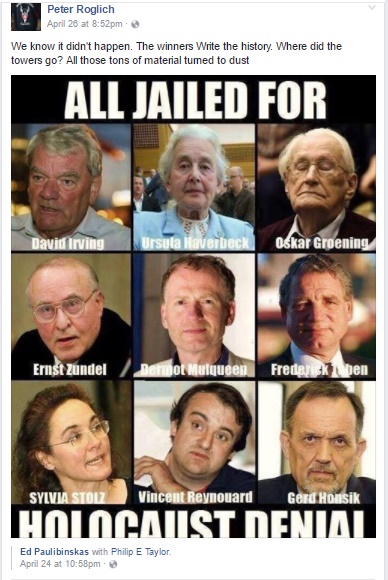 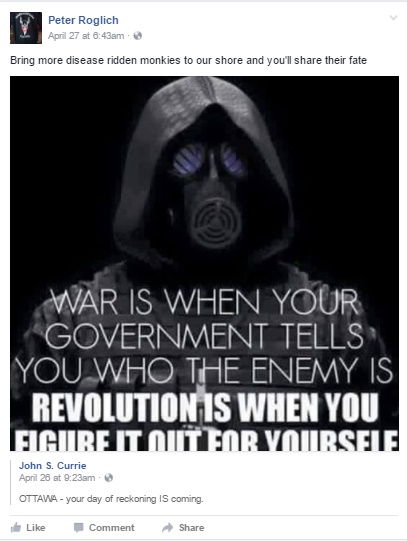 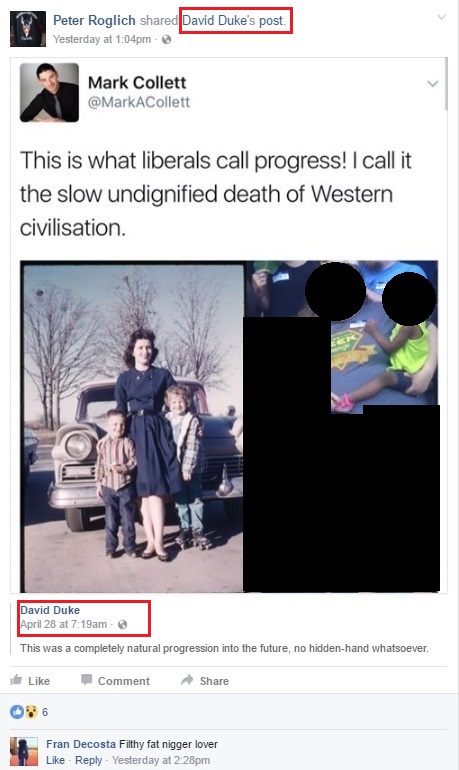 Now, while some have supported the SoO leadership's.... uhm.... brave (?) decision, there seems to be a bit of controversy as well: 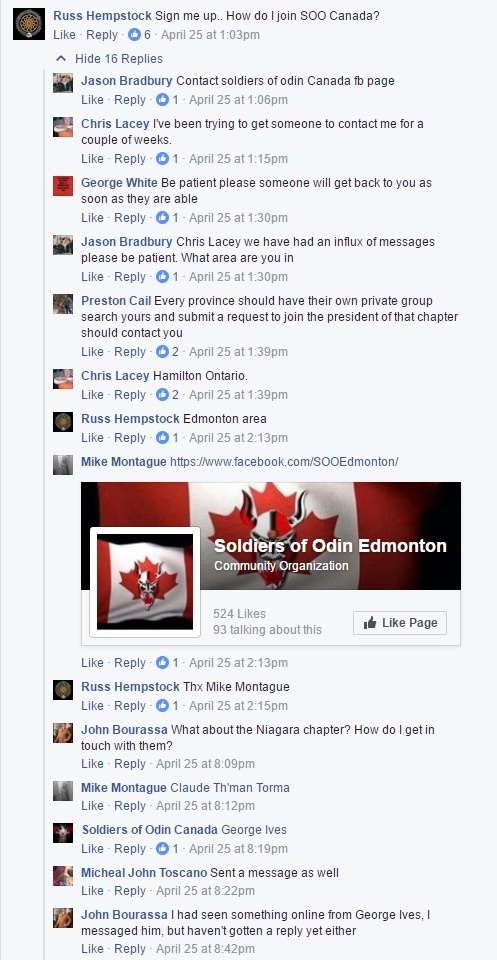 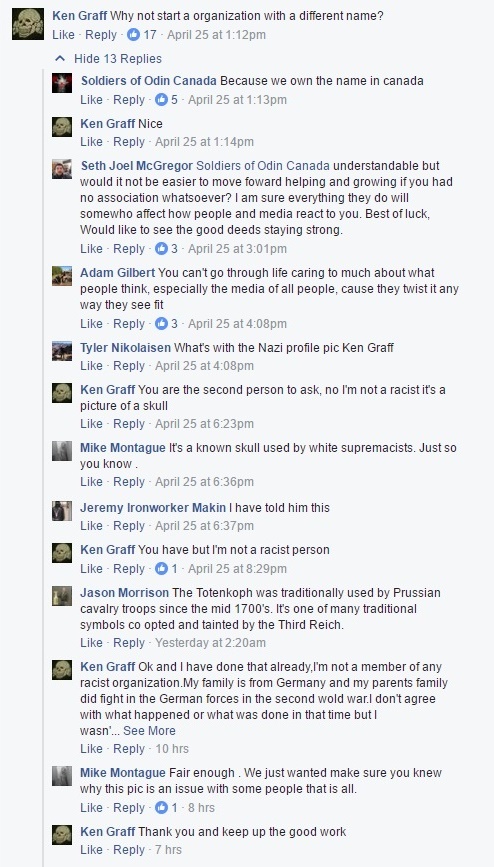 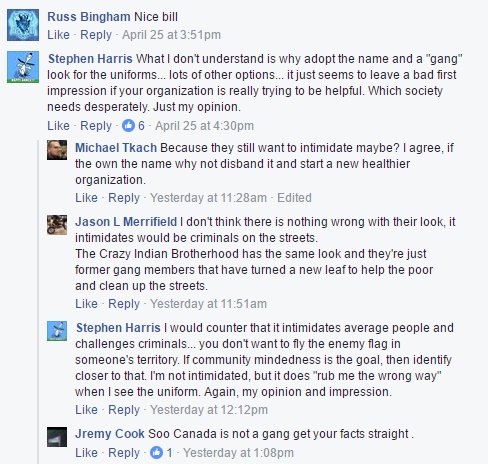 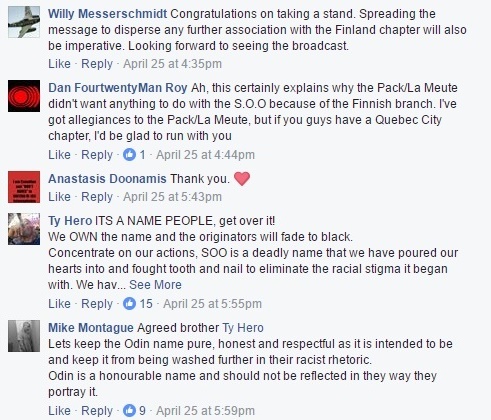 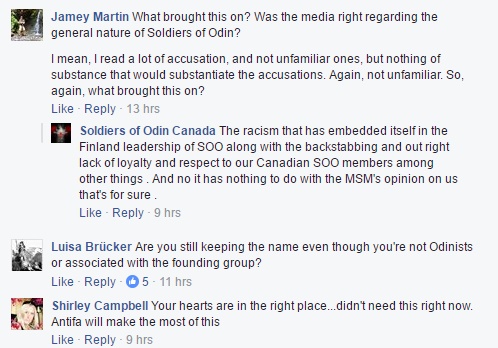 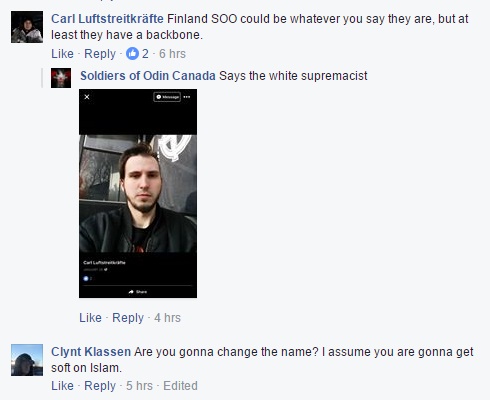 But you know what, at least this guy is solidly on the SoO leadership's side:

Congratulations Bill. You've at least won the people who have been recently convicted for threatening to harm the prime minister constituency. Hayes is also the new WCAI Canada representative in Saskatchewan. More on that at a later date.

But not all of the leadership (or former leadership) seems to be on board with the decision. Arran Taylor, formerly the Ontario Chapter President, seems sort of pissed: 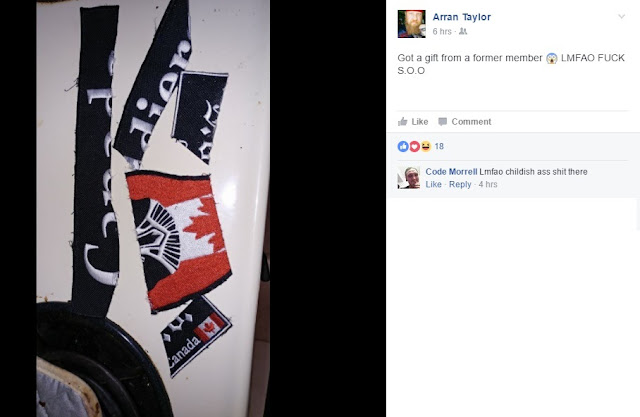 This of course being the man who said he was going to crack some antifa heads together for touching his shield maiden during an anti-Muslim protest in Toronto attended by the SoO and JDL (for those interested in Taylor's love life, his shield maiden seems to have left him for another berserker not long after his profession of love): 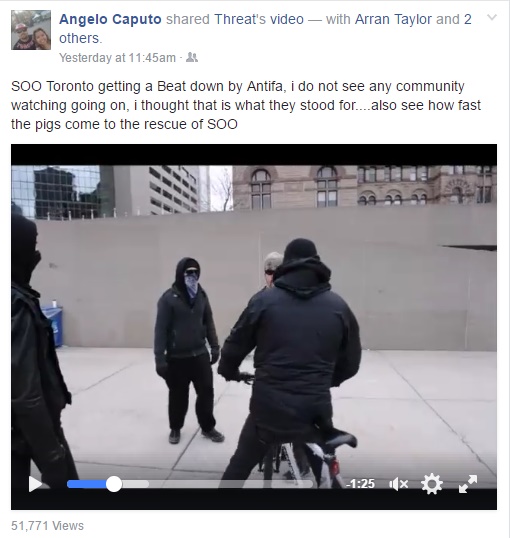 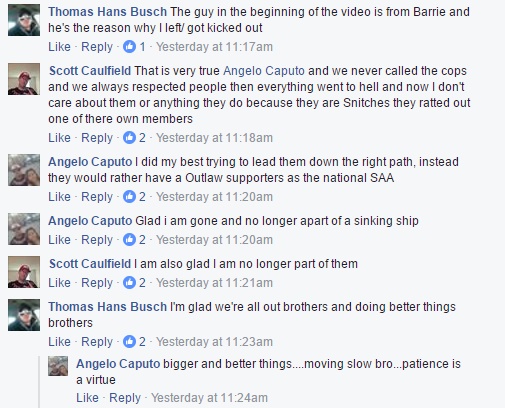 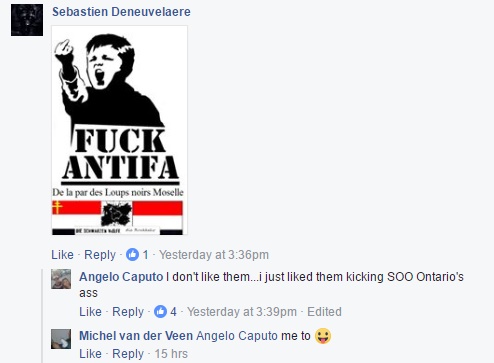 While this is all interesting in and of itself, I am especially appreciative of Taylor's admission found here: 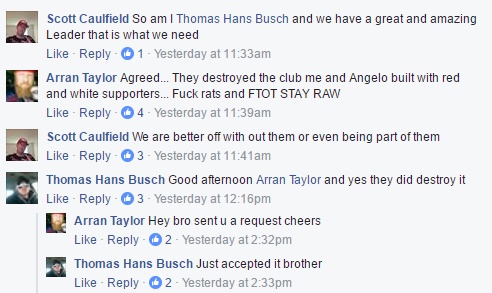 In addition to ARC's reporting that the SoO was loaded with racists, antisemites, and Islamophobes, I also observed that the membership had a certain affinity for the Hell's Angels, a criminal biker gang with more blood on their hands than any Muslim extremists in this country. Of course they denied this because they are unprincipled liars.

Over in Quebec, another SoO member, or perhaps now former member, expressed his displeasure with the decision to break away from the Finnish parent chapter: 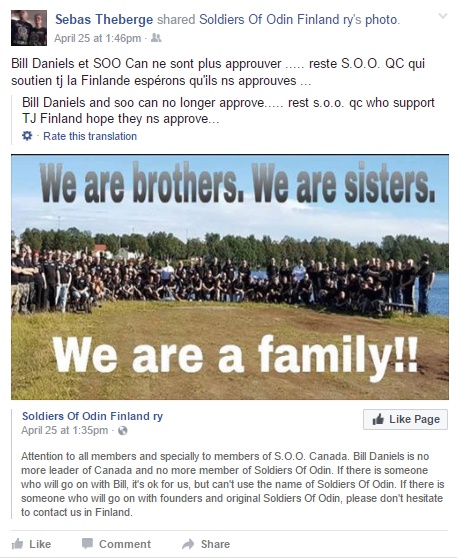 Those commenting agreeing with Sebas include a people very familiar to ARC including Alberta Blood & Honour member Bernie Miller, Stormfront poster and general jackass Tyler Hover, and Lesleigh Goodfellow who while perhaps not familiar to our readers is someone who ARC has been aware of for some time:

We've already seen the fracturing of the Canadian SoO (see here and here) over time and I'm guessing that will continue, as it seems to be following the pattern of infighting within the anti-Muslim movement within the country (more on this trend in a future article). On the one hand this is a good thing, but it does also present challenges. Under one parent organization, it is easier to keep tabs on these people. When these groups fragment, they become both more difficult to track and often some of the factions prove even more extreme than the original parent organization.

ARC asks our readers to help watch these fragmenting groups and if there's anything you think that should be examined closer that you could send the information my way.
Posted by Nosferatu200 at 23:17

How many hours in a day do you losers lurk on Facebook...

Probably more than is healthy. ;)