The last article focused on Toronto. In this one I focus on the situation in Calgary.

I would be remiss if I didn't first address the act of sabotage and vandalism that Jason and Bonnie Devine were again subjected: 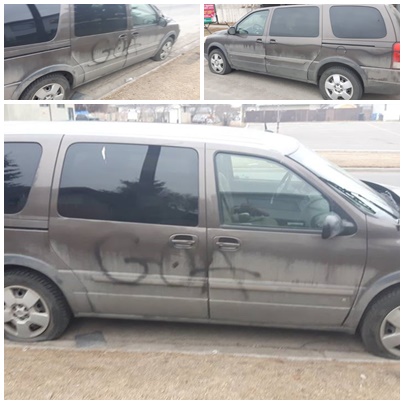 Regarding the incident, Jason noted:


It's been four years since we've been attacked in the night, and even longer the night before a rally, but here it is.

One again our tires have been slashed, but this time there is graffiti.

Was it really the Guardian of Alberta (GOA)? Or was it Blood & Honour (B&H) posing as them?

Who knows? But it's standard practice by racist scum to engage in vandalism in the middle of the night.

Jason and his family have been hit a number of times, the most serious being the late night home invasion that left him and a friend badly injured. To their credit, neither assaults, vandalism, fire bombs, or slashed tires have stopped Jason or Bonnie from speaking out.

More on this incident in a moment.

As for the rally, Jason provided ARC with the following details:


We met early and got to city hall by 10:15-10:20. From then on members and supporters trickled in. Near the end we had about 50-55 people in attendance. There was a heavy police presence, but no conflicts that I saw. As I mentioned before three people who I think were boneheads showed up and stood to the side.

The GOA lady (although now with talks of split I guess she may be with CCC) Karyn Draper showed up to talk her crazy shit at the end. Finally Merle Terlesky and I think two other guys with Trump hats showed up to protest, but they stayed on the other side of the street and didn't come over so I couldn't see as well.

In fact, both Terlesky and Draper both mentioned they would be attending, even while the WCAI, Guardians of Alberta, and (get this) the Canadian Combat Coalition (because they are running out of names that sound intimidating I guess) claimed that they would be sitting this one out: 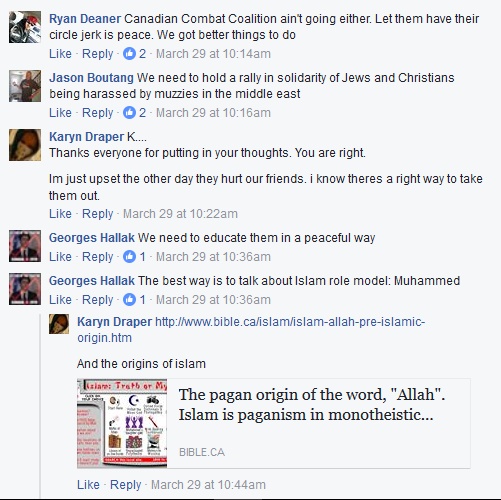 It's nice to see WCAI founder Joey Deluca so concerned about respect. I mean, he couldn't possibly to anything to undermine this noble sentiment? Right? 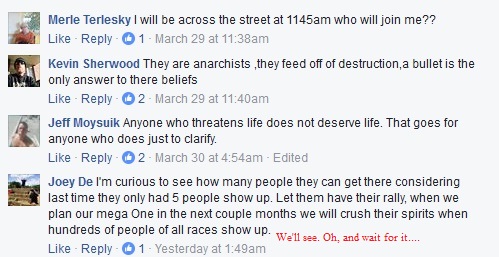 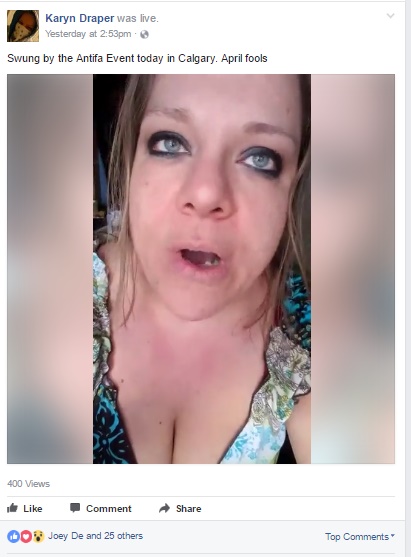 In fact, Karyn Draper, who in a recent video referring to the April 1 protest in Calgary suggests she plans on running for a position on the school board to protect the yung'ns from Islamic indoctrination (though she hasn't quite worked out the details) keeps company with quite a few people who one might regard as a wee bit extreme: 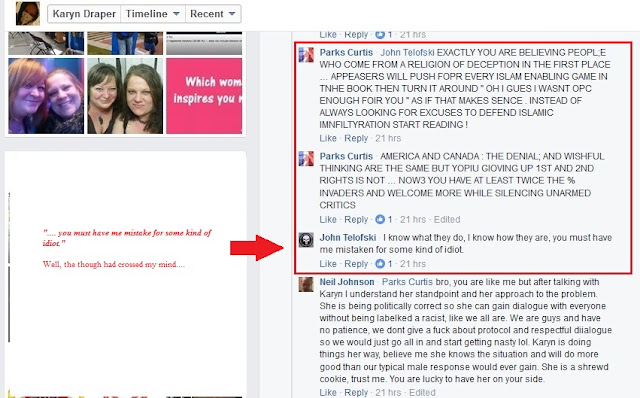 Oh, and let us not forget earth-shatteringly stupid: 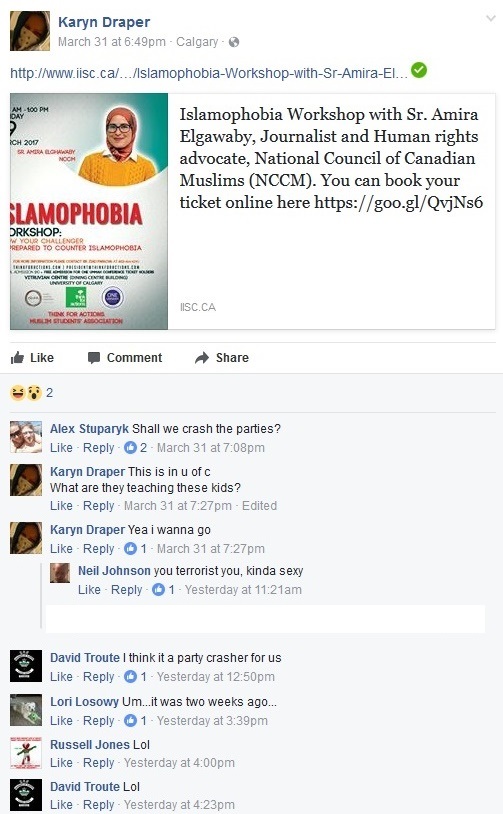 We've been keeping an eye on Draper since noting her presence at the March 4 protest. What is clear is that there isn't a conspiracy theory she doesn't believe (PizzaGate, MK ULTRA, NWO, Free Masons and Illuminati, Cathy O'Brien, etc). She also seems like a person who would be perfectly content with an ISIS-style regime being implemented in Canada, so long as that regime was based on Christian extremism rather than Islamic: 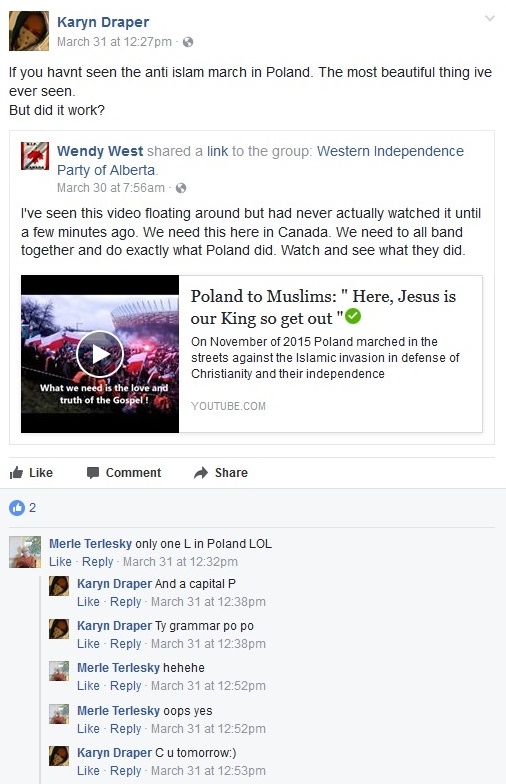 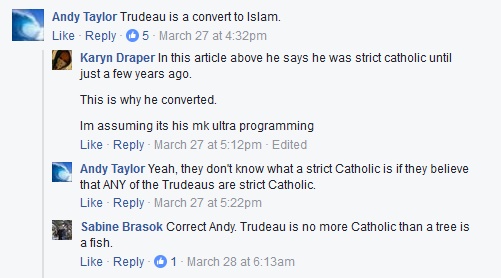 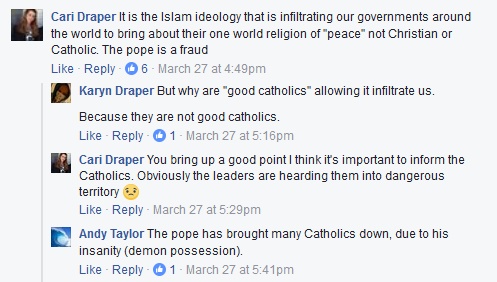 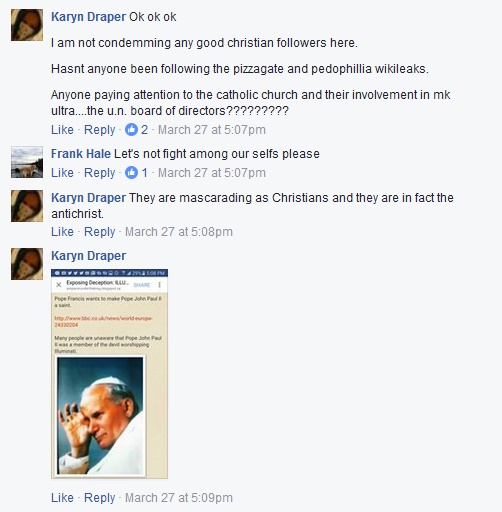 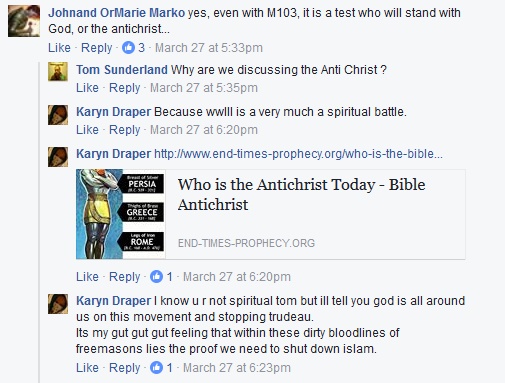 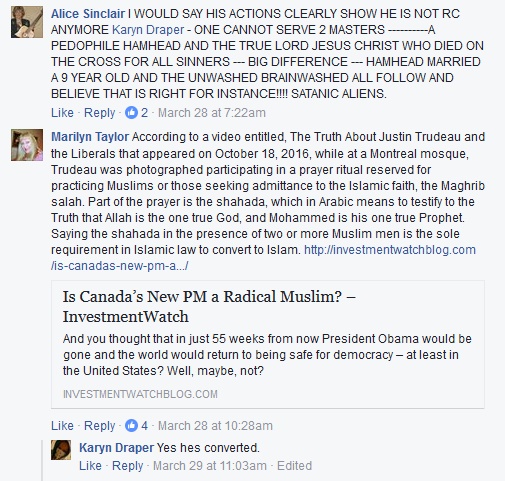 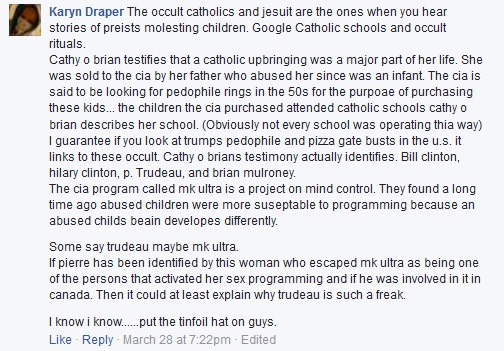 One last comment of which I'm sure the irony will be completely lost on the person who posted it:

Now, returning to the topic of the vandalism perpetrated against the Devine family, I don't actually think that it was the Guardians of Alberta, but the GOA president was spooked enough that he actually contacted Jason to inform him that his group wasn't responsible while throwing his former friends in the Soldiers of Odin under the bus:

Hello jason my name is david troute i am the founder and president of G.O.A and i am sorry to see some ass hole vandalized your van and i can assure you that this was not done by any G.O.A member and if it was they would be reported to the police we do not tolerate that kinda thing in my club also if we can help in anyway please let me know and we will do what we can for you and your family and again this was not done by us. We don't condone this kind of action or behaviour. We want to bring a sense of security to our neighbourhoods. We have been targeted by someone trying to paint us with a bad name. We are also going to look into this situation... people who do this always brag.. when we do find any information we will let you know and again if there is anything we can help with feel free to contact us. We would love to work together and help any who experiencing troubles.

It could also be another club (SOO) we are having a lot of members leave these so called "radical and extreme groups" and join us because we aren't full of hate and prejudice. We have been stirring things up. Again on our behalf I'd like to apologize for any misconception and this attack that labeled our group.

Again I'd like offer any help you might need and we would be willing to help out.
Thank you.

I've already written about the factionalism that had been occurring within the SoO that has been ongoing. Splinter groups include the Storm Alliance, the Saskatchewan-based Patriots of Unity, and the Guardians of Alberta are three such groups, the GOA appears to have further splintered with the Canadian Combat Coalition being led by a former GOA member who was given the boot, as noted by a second GOA email that Jason received:

I hope all is well with you and your organization. My name is Tim and I am the South President of Goa . If i may I'd like to clarify a few things .4

First off , I'm very sorry to hear that your vehicle got tagged and the tire was slashed, further more I'm extremely disappointed that you or anyone for that matter would think that anyone in our group would stoop to that level ..Our groups may have different views or insight on things,but I assure you these radical actions were done by noone in our organization, As David Troute has indicated to you , if there is anything we can do to help we will, and we will also be assisting to find out who did this ...

Further more , I would like to reiterate that even though we may have different views on things , we are NOT a racist group , we are NOT against diversity within our country. What we are against is as Canadians being forced to adopt other cultures and religions..

Let's just stop right there for a moment. Who is forcing Canadians to adopt other cultures or religions?

Oh! I see! You are uncomfortable being around people who come from different cultures and practice other religions, so you conflate the existence of a multicultural, pluralistic, society as a direct threat against you personally because someone might, say. call out you or your GOA provincial president out for making a racist joke which you could do before those humorless coloured folk started getting uppity.


With that being said the people that have come off as the racial radicals (Ryan deaner and Si) have been removed from Goa from myself personally, CCC and what Ryan stand for is the exact opposite of what Goa is about , and whatever si stands for is not us either ....

We are a group that will stand up for Canadian values and the rights and freedoms that our wonderful troops has fought for, further more we are an organization that gives back to our communities from feeding homeless to cleaning up the streets..

so please let me ask you where does this make us a bad organization? Or racist radicals?? David Troute and myself will do whatever we can to continue to keep our country exactly what it is supposed to be and that my friend , is a country that is our home ..

Hmmmm, why might people think that your organization and membership are racist, misogynistic, bigots?

Perhaps it is because of the racist, misogynistic and bigoted things you say and write? 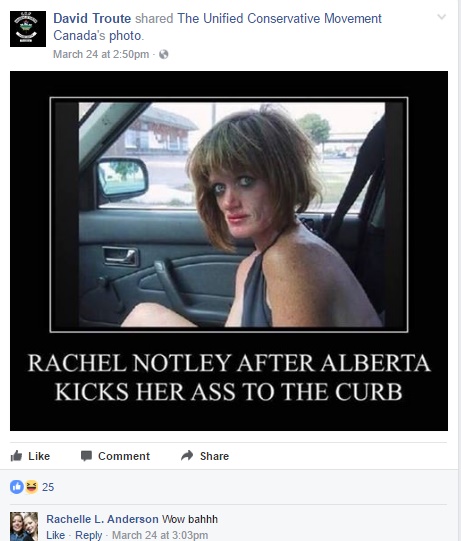 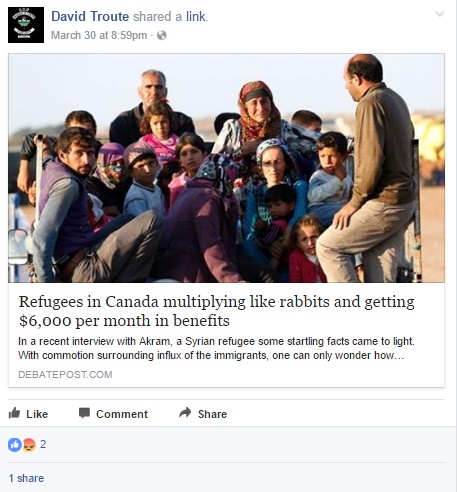 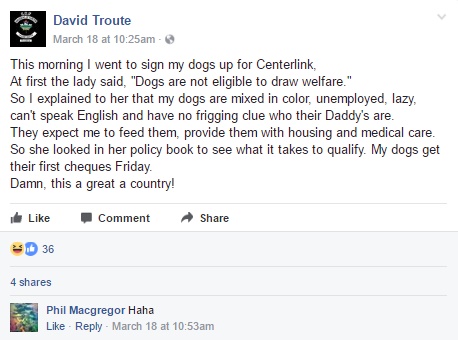 Or the fact that you moan about a non-binding motion condemning hatred of an identifiable religious minority in the country.... 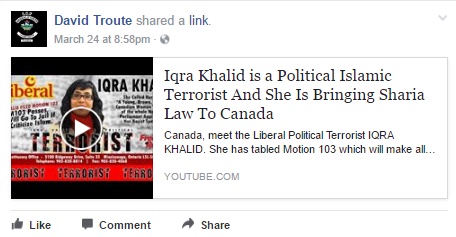 .... while unironically cheering for and celebrating the suppression of that religious minority, thus sort of justifying the sentiments of the motion that has so aggrieved you:

And no, I don't think you and your group are radicals.

I think you're reactionaries. There is a difference. Look it up.


If you have any questions or concerns please feel free to contact myself or David and we'd be glad to respond.. once again if we find anything out we'll be sure to forward that to you and the authorities.. thank you for your time

Still, aside from all that, it is interesting that there might be a little bit of internecine, low-level warfare going on between Islamophobic hate groups in that they are busy undermining each other in addition to their other efforts.

But however did Troute and the GOA learn about the the vandalism committed against Jason?

Well, after the rally it appears that Karyn Draper was confronted by the protesters who showed her photos of the damage. She posted under her video recounting the anti-fascist protest which elicited not only a response from GOA founder and president David Troute, but also a telling response from WCAI founder Joey Deluca: 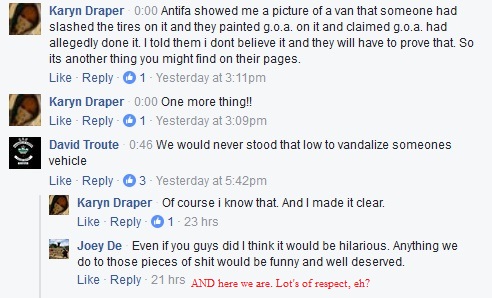 Perhaps we should add another group to our list of suspects?
Posted by Nosferatu200 at 22:48

Well this sounds like more interesting reads to come as all these hate groups start giving information on each other to ARC and the police.

In the second letter, they say they 'removed' "Si" from their group. Yet, in all these screen shots, the last one of the mosque, Si is the only one who sounds logical. He seems anti-violence towards Muslims. Why exactly would this guy be bad for the group?