You know, there are times when we have to wonder what good karma we have amassed for fortune to fall into our laps.

Ladies and gentlemen, might we introduce you to the newest member of the Southern Ontario "Skinheads", Jeremy Crawford:


We should at this point provide a little background. Crawford actually contacted us in May thinking that either we were the SOS or that we could hook him up with the SOS:


my name is jeremy crawford when u here the name u say skinhead thats feared and well respected im friends with brodie walsh anyways i lead small skinhead groups in london and sarnia ive been through thick and thin being a skinhead but i always come out on top because were more intelligent than the others [emphasis ours] i want in im 32 and i want in i want a group to call my family that i can trust with my life im 220 pds and covered in white power tattooes covered. im the poster child for skinheads im purebred german blonde hair blue eyes etc please get back to me. WPWW


Jeremy Crawford 32 220 pds pure german and life long skinhead i want in i have ran little clicks and iam well respected i want in the southren ont skins get back to me at ************@hotmail.com or ************@gmail.com get ahold of me please i would be an incredible asset to the group and i know brodie walsh

This in and of itself wasn't actually a surprise. It actually isn't all that uncommon for ARC to receive messages from boneheads who are either functionally illiterate or who neglect to actually read our stories (or the rather large Anti-Racist Canada banner) and who believe we are a racist group. So it was with Jeremy Crawford. As he also provided his email, we decided that we would get in touch with him to see if we could extend this little dialogue. However, we didn't hear back from Crawford so we published an article making fun of him for contacting an anti-racist organization to request membership in a racist organization.

We knew this would likely result in the SOS reaching out to Crawford, an assumption that soon proved correct:


Later, on June 28, Walsh posted a follow-up on his wall:


That, we figured, would be the nail in the coffin. No chance that Crawford would reply to our email.

Then, on July 4 (which ironically turned out to be Crawford's birthday) we received this:

Before we go on, we want our readers to wrap their heads around this.

What will now follow is a nearly month long exchange with now (if his later messages are to be believed) SOS member Jeremy Crawford. We would like to note that in none of the messages that we sent Crawford did we claim we were the SOS ourselves, though we certainly didn't do anything to dissuade him of the belief that we were.  We will provide some commentary, but limit it as much as we can.

Really, just reading the messages is well worth it.

There was a rather lengthy delay at this point, so we decided to push the issue a little more. Of course we also assumed that he might have actually figured things out, but we were soon dissuaded of that thought. We also grew genuinely annoyed as we started receiving spam messages from Crawford's email account and told him to stop clicking on links that he receives since it appeared they were hijacking his address book:

Now that we had more of a commitment, we decided to do a little actual digging. We eventually sent a list of questions to gauge his suitability for SOS membership (again, we note that we never said we were the SOS, though we believed we had an idea what their membership criteria might be). Questions included the mundane biographical details, but also asked about his crimes (both those he was convicted of like this and this, those he got away with, and those committed most recently), his attitudes towards minorities, weapons, violence, and is political views. His responses were most enlightening:

Crawford certainly is proud of his criminal record in these exchanges, presenting them almost as one would provide past job experience in a résumé. He also willingly drops a few names which is something we know racist gangs really appreciate.

Oddly, he also really, really, seems to want a t-shirt.

But like all good things, this exchange eventually came to an end:

So we answered him by providing the following video:

Sadly, it will quickly become apparent that Crawford is unfamiliar with the Rick Roll. But what we do see is a range of emotions from, "I'm not mad" to confused to, "fuck you!" often in the same sentence, though to be fair most of his paragraphs are comprised of a single sentence. He also backtracks on a lot of his claims. He's no longer like "that" and is now a Christian, don't ya know:

Since he claimed to have spoken to 21 members of the SOS, we challenged him to name them. Hey, couldn't hurt. But finally Crawford seems to have caught on:

We sent one final message resulting in this reply:

Now, we know what you're thinking, dear readers. What racist gang in their right mind would want someone like Crawford amongst them? Surely, even the blisteringly stupid SOS wouldn't touch this guy with a 12 foot pole.

If you believe that, dear reader, you really don't understand the brain trust that is the Southern Ontario "Skinheads": 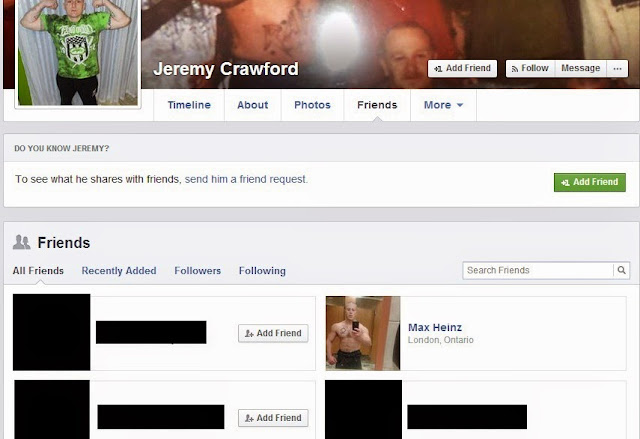 
Keep on reaching for that rainbow, Jeremy.

He's a big cheese now! Is the first rule of SOS, talk about SOS? Holy shit, that's some funny stuff.

So this guy openly says he talks to police? Lol

I nearly feel bad, like I'm laughing at a special needs kid or something. Ok, I'm over it. Hahahahaha. Is this guy for real? I look forward to future write ups. Comedic gold!

(Also, for Max and his "crew" of dullard dum-dums, I wrote that really, really slowly, so you all could read it. Again.... hahahahaha.)

The White Nationalist Movement didn't traditionally birth the SOS, she defecated them, because her vagina was busy.

This guy is so dumb, there is no way he is real. Maybe a government agent infiltrating a crew....?

i don't put much faith in the government but i don't think they would apply to join here. however i do believe being a rat is part of the qualifying requirements to join which he seems to have down

Nothing screams white pride like an eco shirt fo sho.lmao

Wonder who his brother "crookwed" customs officer is? Wonder if the RCMP is looking into that.

I'm sure that the outlaws appreciate being implicated in all of his rants.

And what kind of judicial system puts a person like this back on the streets?

He should be deemed a dangerous offender and locked up for good.

I KNOW THIS IDIOT
I hope the people who run this site take this message to heart and please believe this is the truth this whole Jeremy Crawford incident is funny as hell this guy's an idiot I know him from the street, from jail (or in Jeremy terms 45 years in prison blah blah story up) and he is just as retarded as he sounds in the messages, he is a rat his brother's a cop and no joke lol his last cell mate was African American he says he hates rapists and sex offenders which I found very odd of him to say cause he was so terrified the only place he would go was range 1 left side which is where they put any sex offender or little scarred Jeremy . Because he ran and hid from my range and from my point of view which he was right infront of me at the tv talking to one of the smaller guys on range but it's ok Jeremy you did run 1left when you got there which is a pretty good victory considering your competition for the spot of "hey everybody look at me I'm so tough stuck in PC" was a rapist and your serving partner was a molester! I know for a fact that he's about as hard core as he looks in his pictures and for those of you out there who think what I am saying is not true, fine by me but Mr Crawford you know it is true and just so u know who this is I am the guy who you wrote a letter to the jail guards saying to get you off the range cause you fear for your safety and than wrote my name as the reason why, real solid, real hardcore, real tough guy. Really you know your a coward and now that I see your views on life I realize you belonged with the lowest level of scum in today's society On 1 left with the rest of the diddlers and hide outs, but I do thank u greatly Jeremy because that was funny as hell but please take that your from London off of your resume of retardation, you are an embarrassment to all of us but I'll bet your cop brothers proud lol let alone your parents.

From: One person that is so scared of this pretend hardcore great story teller lol see I can make up bullshit story's too.
Ricky T ( right now wondering if he's to stupid to figure out who this is and maybe I should have spelt out my last name for him lol)