The Toronto civic election, already a three ring circus, needs some clowns. And for that you can always rely on Don Andrews and his Androids:

Seated around Andrews' table with him at the weekly gathering were five people who had jobs. The rest of those present stood around the table; numbering about 10 people, Andrews called them his "Androids": unemployed persons who lived in Andrews' rooming houses. We were told that Andrews took the cheques they received, subtracted the rent and other expenses, and gave them the rest of their money, making a big production


Last time we heard the name Christopher Brosky was when Michelle Erstikaitis was name dropping him in an effort to bolster her neo-Nazi street cred:

I first came into the movement at fourteen years old, dating my first Skinhead, and then I continued dating skinheads for most of my life. The most recent high profile guy that I went out with is Chris Brosky, a Northern Hammerskin.(Yes, the same Chris from Texas who killed a black man)

However, as Erstikaitis alludes to and which we detail in "The History of Violence," Brosky was well known to us before for another far more serious reason: 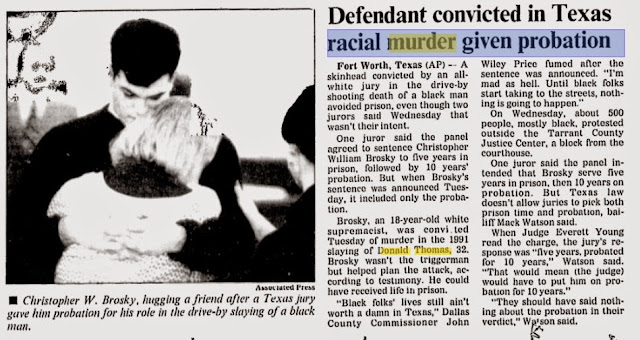 Brosky may have received a sentence of 40 years for his part in the murder of Donald Thomas, but he didn't serve it. After 16 years in prison, Brosky was released and immediately deported to Canada in 2009. Since his release and return to Canada, he has lived in Toronto and has generally been fairly quiet. We had made a point of checking up on him from time to time but hadn't done so in several months.

Brosky has now given us a reason to keep tabs on him again:

A man who served time for the racially-motivated drive-by shooting of a black man in Texas 23 years ago is running for a seat on Toronto city council.

Christopher Brosky filed his nomination papers in June for Ward 28 — Toronto Centre-Rosedale — where he’ll go up against longtime incumbent Pam McConnell this fall.

Brosky, described as a neo-Nazi skinhead, was 16 when he and two friends killed a 32-year-old man named Donald Thomas outside Thomas’s Arlington home, the New York Times said. According to the report, the friends, one of whom was found to have pulled the trigger, pleaded guilty to murder and testified against Brosky.

“Does it have any relevance in Canada though?” Brosky asked rhetorically....

The above article doesn't provide Brosky's political affiliation, but the Ward 28 Candidate Review (which notes his only political experience consists of his Texas murder conviction) does. Don Andrews writes a lovely piece on the Nationalist Party of Canada's website: 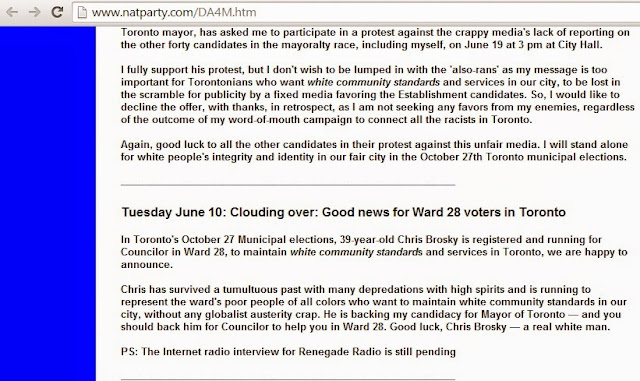 Brosky isn't going to win. Neither will Don Andrews, John Beattie (who received some attention as a fringe candidate yesterday), Paul Fromm, or Tom Winnicki (should either choose to run again). In most cases that isn't the point. They want their names out there as candidates because they are of the school of thought that any publicity is good for their cause. However, we think increasingly the opposite is true. These racist fringe candidates really make fools of themselves which is perfectly fine with us. And some of the more irrational of these candidates actually convince themselves that they might win. For example, John Beattie did a video interview that is found on "The Highlander News Online." An objective individual would see it for the train wreck that it was, but Beattie genuinely believes that this video creates a good impression and that he has a chance to win. It is both hilarious and very, very, sad.

So, if people like Brosky want to subject themselves to public ridicule, we are more than pleased to help him in his efforts.
Posted by Nosferatu200 at 11:58