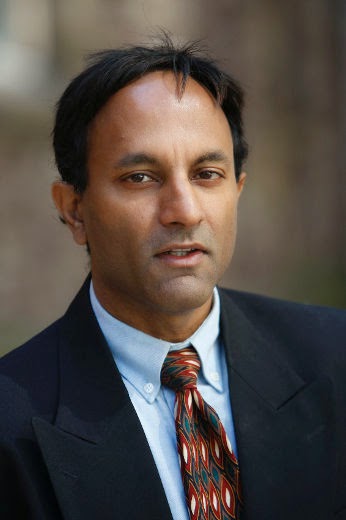 Last time we mentioned Ron Banerjee in an article he was acting as the wingman to Islamaphobe Eric Brazau. Banerjee claims to be the head of the largest Hindu advocacy group in Canada he has named Canadian Hindu Advocacy.

The reality is that the CHA seems to consist solely of himself and perhaps one or two others and is simple a vehicle to promote Banerjee's anti-Muslim hatred. Certainly legitimate Hindu organizations have said Banerjee doesn't represent their views and they don't believe his claims about the CHA. And when challenged to put up or shut up, Banerjee always seems to embarrass himself:

A final word related to the legitimacy of CHA. Back in April when we referred to Banerjee in our article, we decided to take a look at the CHA twitter account. At close to 3000 followers, it did seem that Banerjee was at least pretty good at convincing people there was more to CHA than there actually was. Then we decided to look at the legitimacy of the followers. First, we did an analysis of the ARC twitter account:


Seems pretty legit to us. Shall we compare this to CHA's 2800+ followers?


Still, Banerjee's.... er.... CHA's tweets are still quite telling, in that they tell us a great deal about the hatred this man harbors. These screenshots represent just a fraction of those that we could have used from this calender year alone.

For example, in reference to Sushmita Banerjee, a Hindu woman married to a Muslim man, who was murdered by members of the Taliban Ron Banerjee posted the following: 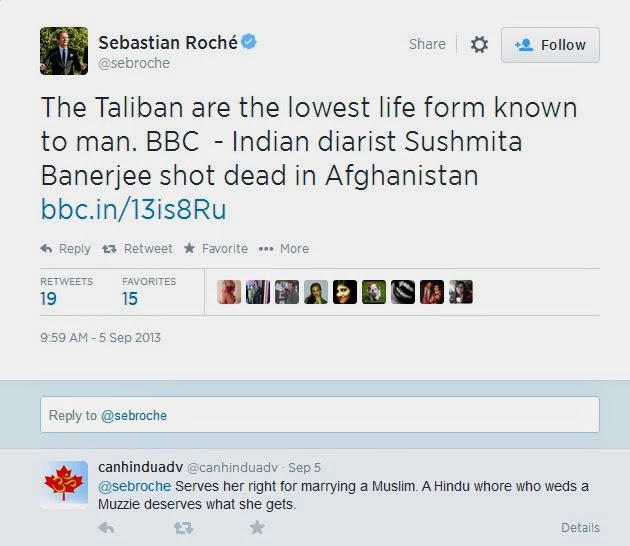 Another woman, Malala Yousafzai who at at the age of 15 was the target of an assassination attempt by members of the Pakistani Taliban because she had the courage to seek and education and spoke out passionately for the education of girls. Thankfully she survived and there are few who don't admire her incredible courage.

But you can count Ron Banerjee amongst that tiny number of misogynistic bigots who don't: 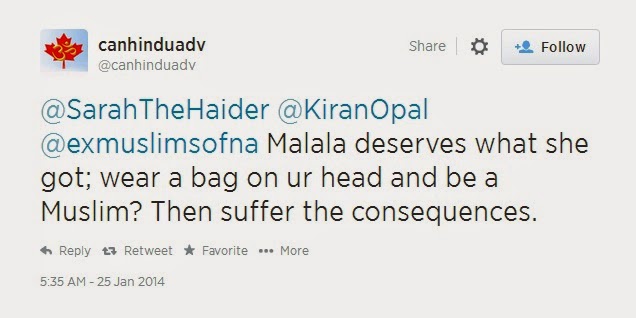 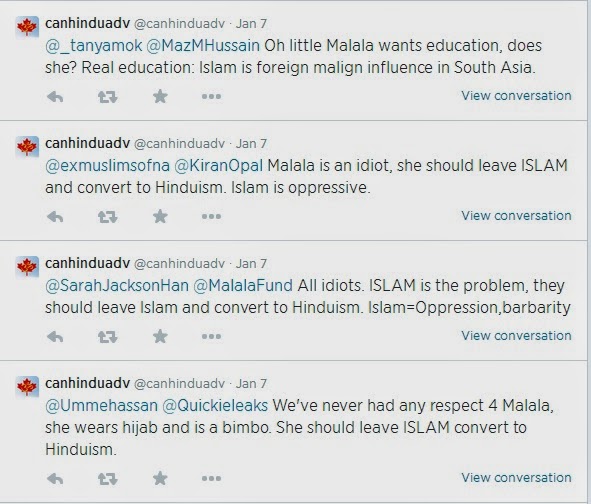 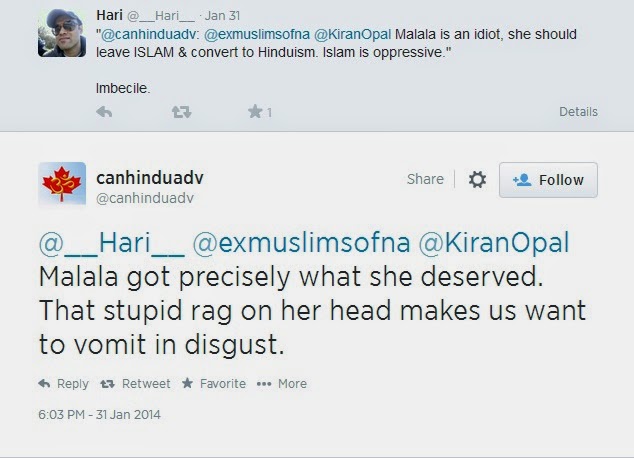 Then there's the plight of the Burmese Rohingya who have been subjected to abuse, persecution, and murder. Banerjee is not only okay with this, but he celebrates it: 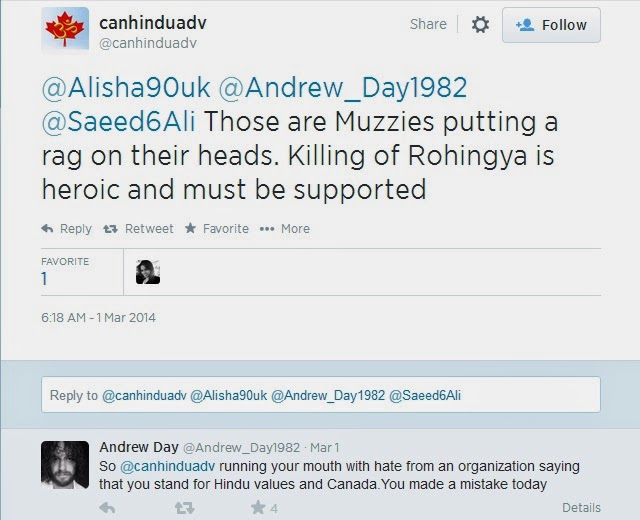 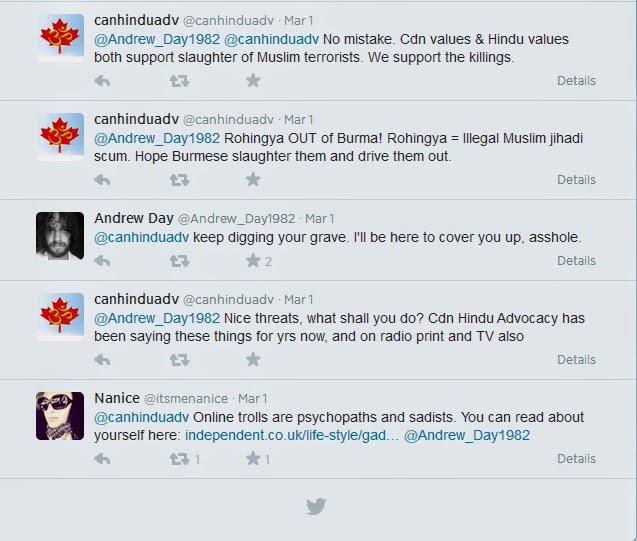 Then there's the general bigotry.... 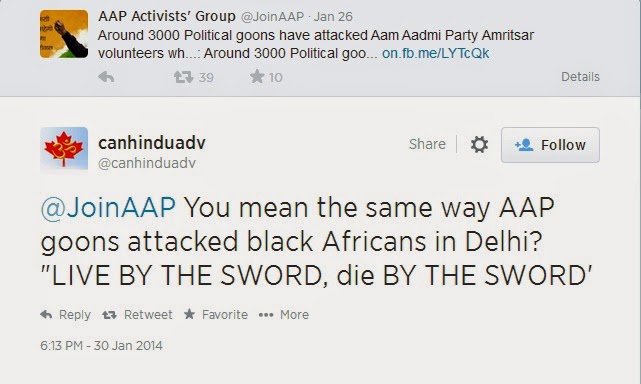 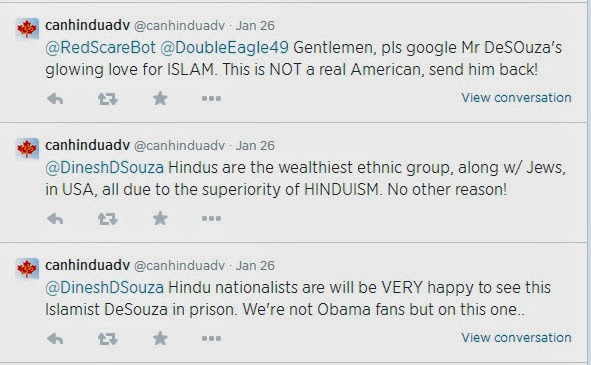 .... and some more sexism, you know, just to spice things up a bit: 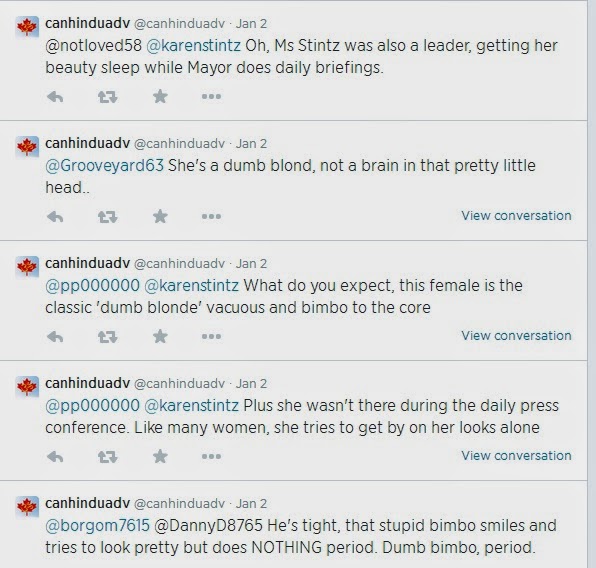 Ah! The Toronto mayoral race! Man, you just can't get away from it can you? We're sure the good people of Toronto the Good will be pleased when the carnival ends.

But the mayoral election actually has some relevance. As it turns out, Banerjee appears to be a Rob Ford fan: 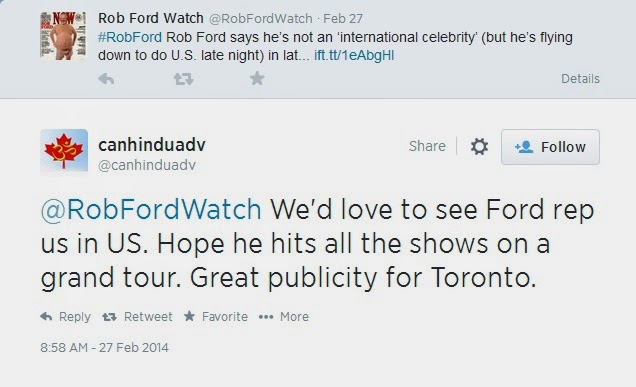 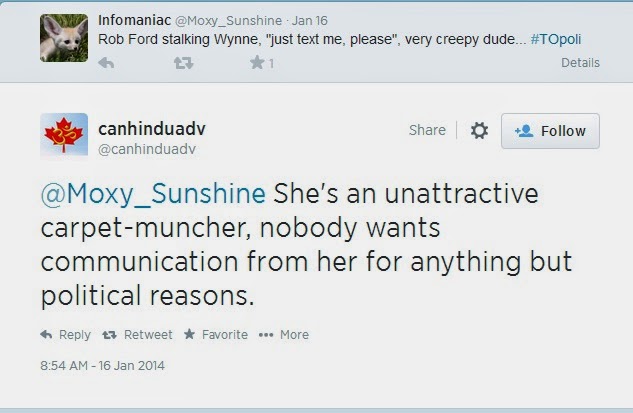 So maybe it isn't at all surprising that Ron Banerjee himself might have decided to show up at the three ring circus (really, there was someone riding horse through the park and a rainbow bouncy castle) that was Friday's Ford Fest:

There was an inevitable anti-Ford protest. In the video found at the link above, one of the protesters appears to have been assaulted on camera. Tell us if you think anyone looks a little familiar: 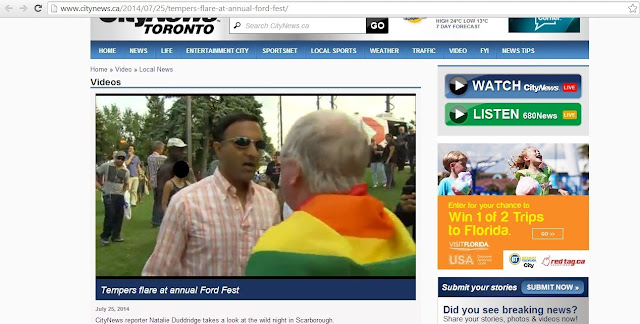 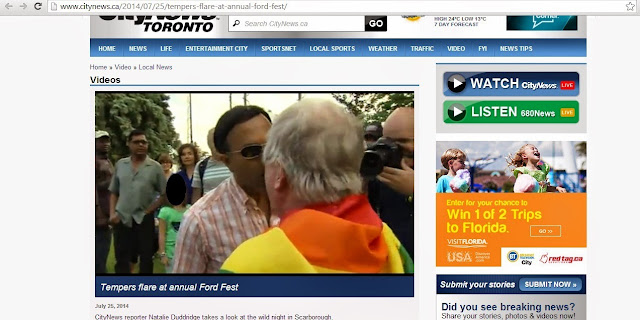 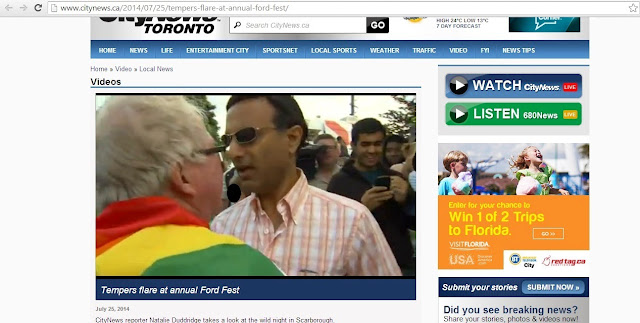 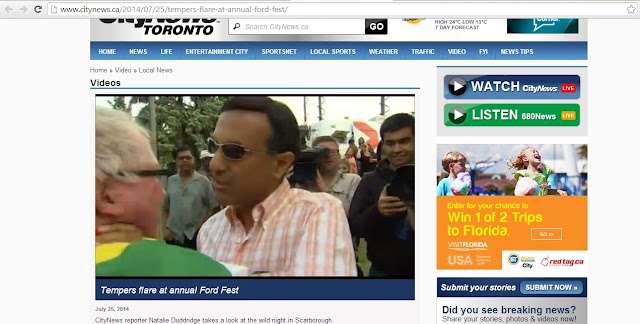 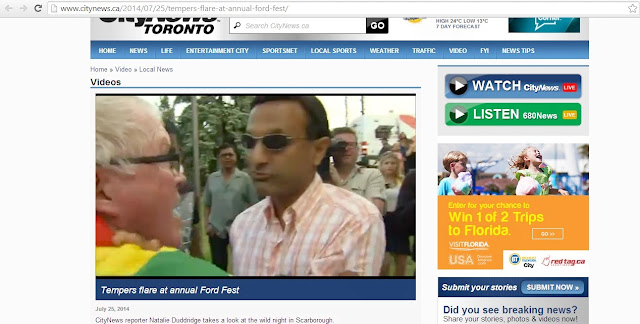 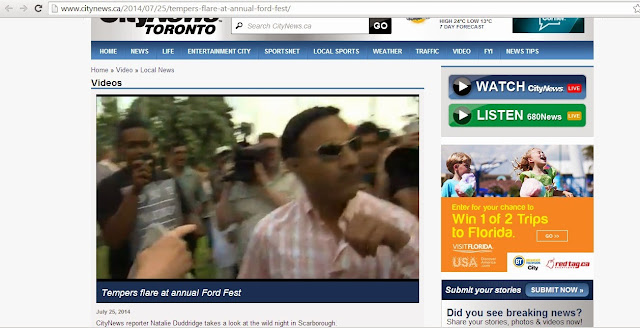 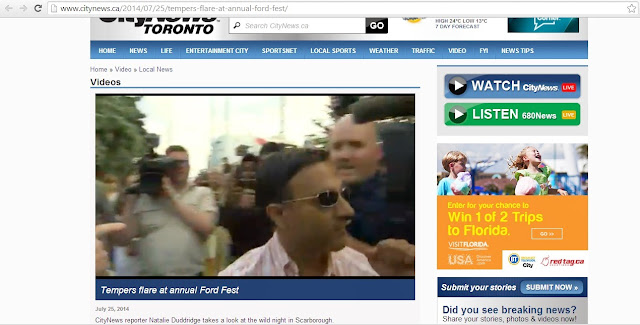 We wish that we could take credit for this catch, but full credit goes to the folks on twitter (this link includes a clear image of Banerjee with his hand around the protestor's neck) and for a friend of the blog for the tip.

So, Michael Coren. Are you proud that you had this guy on your program?

UPDATE 2 (August 9, 2015): We must note that Michael Coren has had a significant change of heart since he was last mentioned on the blog.

He is good people.

UPDATE 1: Shit, this was an ugly scene. 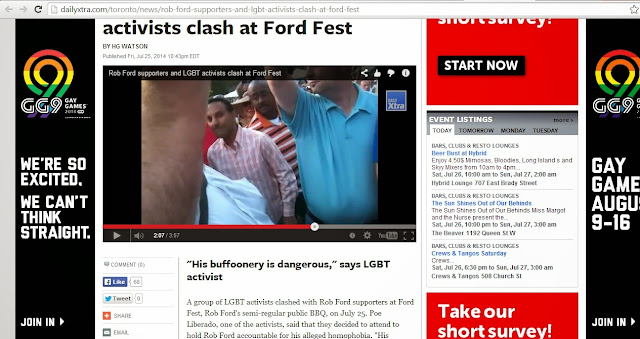 We managed to track down another video posted at Daily Xtra. The entire video is disgusting, but Ron Banerjee makes an appearance clearly at 2:06. Prior to that, he can be heard yelling, "Go home faggots."

It's LGBT, not LBGT

Looks very much like him. Same M.O. But any way to confirm?

The moment at 2m06s of the last YouTube video can be seen more clearly after the 5m mark here: http://nowtoronto.com/news/story.cfm?content=199020

Correct me if I'm wrong, but aren't those comments considered hate crimes in Canada? Will he have to go to court for that?

What a sad, hate filled moron.

Calling someone a fa**ot etc isn't hate speech, criminally at least, alas. Which is why it's so absurd that all these religions were decrying including gays in hate speech legislation.

It becomes hate speech, potentially (note that there have only been a handful of convictions in the decades we've had this legislation) when you're inciting hatred and violence -- "kill all (whomever) etc."