We frequently receive fan mail here at the blog from our adoring bonehead audience. Some of it comes from longtime readers while others are the result of boneheads finding us for the first time. Let's begin with the latter example first.

A few weeks ago we updated, "A History of Violence" adding a number of new entries, most of which were related to the Southern Ontario "Skinheads." However we did include aligned with McKee's Blood & Honour movement but who, prior to his association with McKee, was the leader of another tiny group which may have never been more than the fevered imaginations of the founder:

Neil Robert Kehler, the ringleader of group of men who robbed a Domino's Pizza and other business at gunpoint, was sentenced to 5 years in prison:


The group escaped into a nearby van which had its licence plate covered.

Two nights later they robbed a Shawville Rd. S.W. Super 8 and returned to the same motel on Sept. 6, only to leave after finding no one at the front desk.

A security guard watching video in a monitoring room saw the Kehler and the youth on surveillance cameras, but only later realized he wasn't watching footage of the earlier heist.

The pair were arrested following a Pizza Hut robbery on Sept. 9, while their accomplices were later nabbed by police.

Kehler had been the leader of a very small white supremacist group he called the White Knights prior to his arrest and imprisonment, though it doesn't appear to have been much more than an Internet-based group. Kehler has written that he planned to attend the next "White Pride" march organized by the Aryan Guard, however his arrest precluded his involvement. Upon his release, he became more closely associated with Kyle McKee and his Blood & Honour.

Normally we don't hear from the boneheads we include on the list, though there are some notable exception. However, not long after updating the timeline, Mr. Kehler decided to get in touch:

Not long after Kehler indicated that he doesn't exactly know what the phrase, "I'm not going to repeat myself" means by repeating himself a few days later:


We also don't think he understands how a timeline works or use of the past tense in the English language. We noted that his involvement (such as it was) with the "White Knights" was prior to his arrest and incarceration in 2009. He appears to believe we are implying that he is still involved with this group, so maybe he doesn't know what the word prior means?

And yes Neil, you have a lot of photos. We even have the ones you posted prior to your 2009 arrest which are pre-facial tattoos ("pre" also means "before" in this context). But to satisfy your wishes, and because it's no skin off our collective noses, we did cut out the other individual whom we had already blacked out prior to you contacting us.

Everyone is happy! Huzzah!

Now Neil isn't the only person who contacted us recently. A longtime reader/angry shut-in/creepy misogynist also sent us a message regarding our post on the demise of Sec. 13 in which his words featured prominently (here and here):


Clearly Winnicki isn't aware of the fan reaction to revelation that, "Breaking Amish" was mostly faked.

Since we hadn't checked up on Winnicki in a while, we figured we would see what he was up to. One of his current projects is detailing the "censorship" his posts receive at the "London Free Press" and other online news sources, indicating that he doesn't understand the meaning of censorship:

His most recent example? A comment critical of interracial relationships and of white women who find people of other races attractive (as opposed to finding Winnicki attractive, which is pretty much a non starter for so many, many reasons):

Tom. Dude. Are you REALLY going to make us do this to you?

Yes Tom, Dolph Lundgren was a good looking fella in his prime. And in his prime, do you want to know who HE believed was attractive?

Grace Jones who was then, and still is, fabulous! 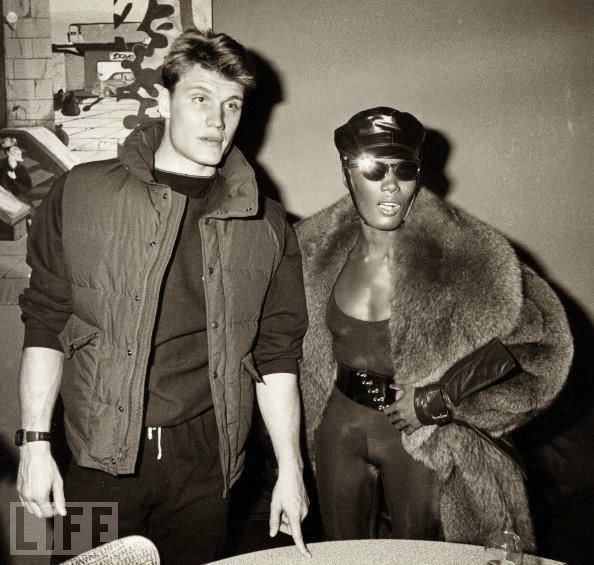 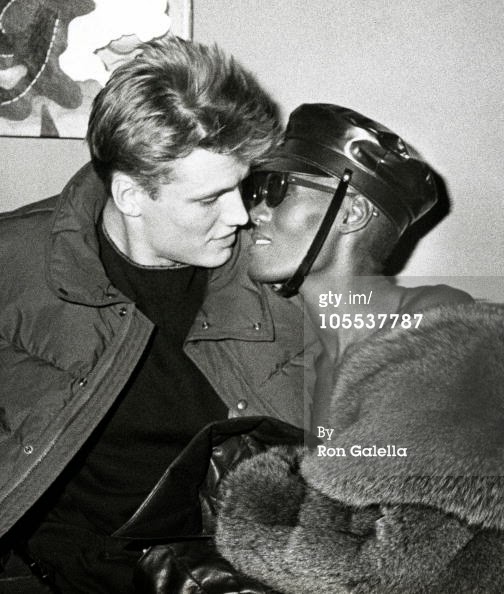 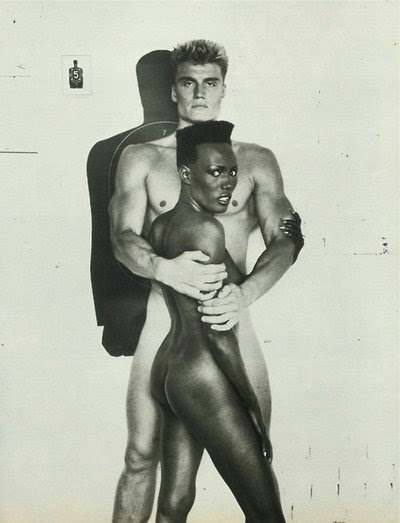 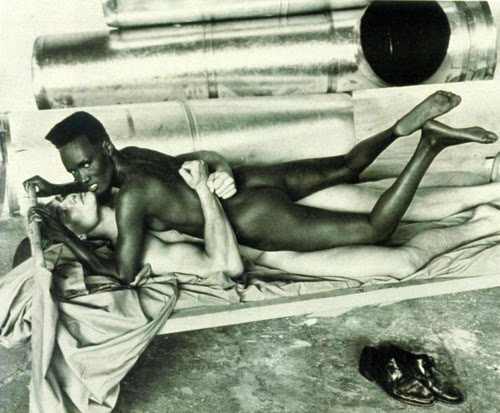 The next one is this reader's personal favorite: 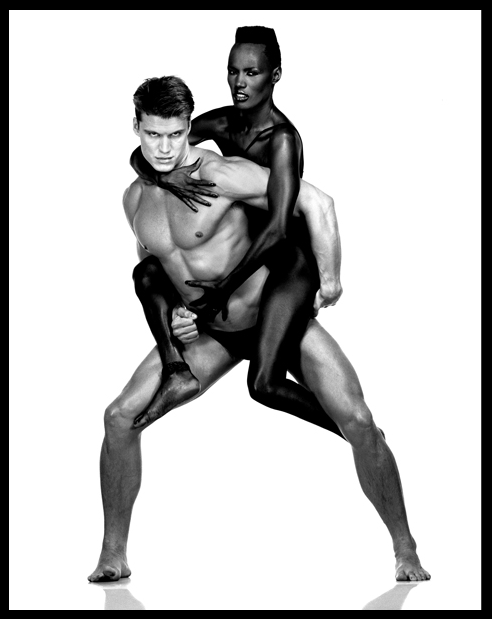 All she needed was a bridle and harness and she could ride him.

His light skin and her dark skin co-mingling in the throes of passion, the sweat glistening on their taut bodies as they writhe about in the pale moonlight.

You have that picture in your head now Tommy?

As noted in the past, every good bits and bites post needs at least a dash of Paulie. But this is Paulie with a twist in that it is what is being written about him rather than what he writes.

We could very well be mistaken, but the last time Sebastian Ronin broke bread with Fromm was during the sparsely attended Occupy South African Embassies in Toronto last June: 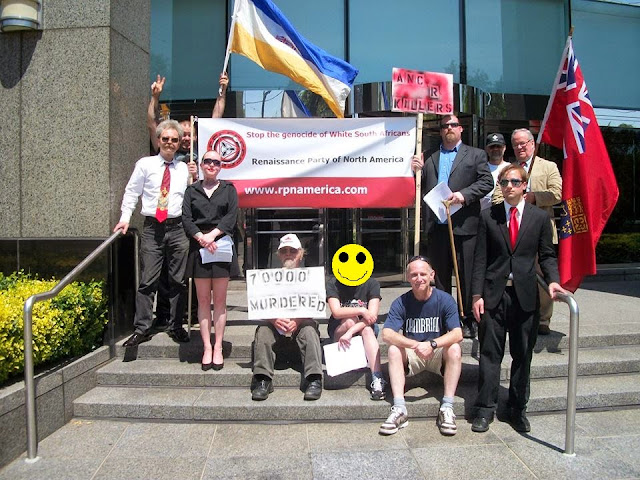 Now there aren't many groups or issues Paulie won't attach himself to, but we think even he is able to take a hint eventually.

Remember when we reported on/made fun of Paulie's trip to Malta where he was repeatedly referred to as Dr. Fromm? Yeah, it was funny then and still is, especially as he didn't correct the error. But we strangely haven't revisited the issue which for us is odd since we really like to beat a dead horse.

But ol' walrus whiskers hasn't let it go. These screen shots were taken from his March posts: 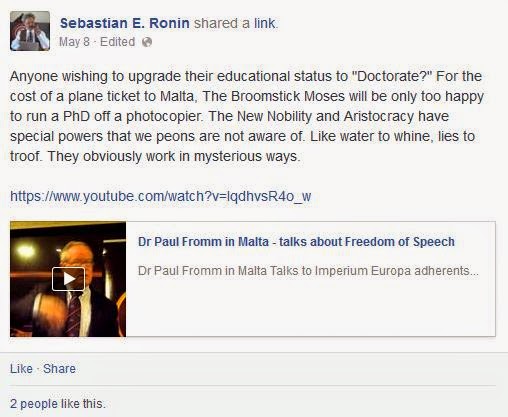 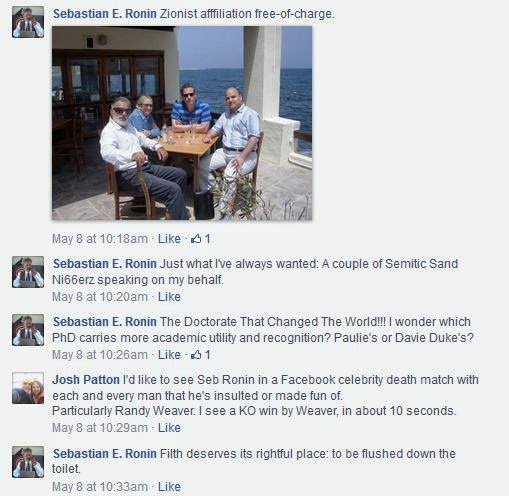 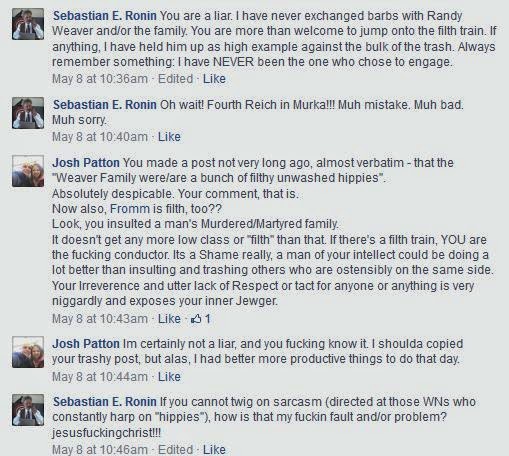 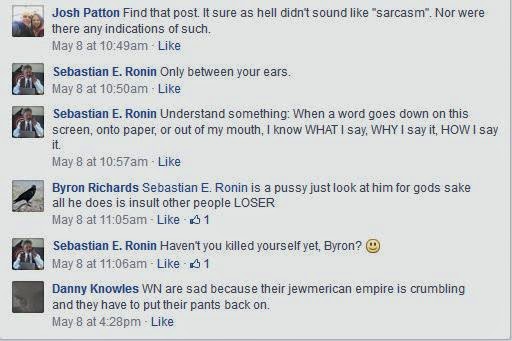 Yeah, he's an asshole, but it's a lot of fun to watch.

Ronin often finds himself given Facebook time outs and he was offline as a result for at least a couple of weeks. He was allowed to post again this past week and he's still focused on Paulie, which we really enjoy:

Paulie's status in the Canadian movement has been in decline over the years, though he does still have some capital in the United States and overseas. Sure, Ronin is a Canadian as well and yes, he tends to attack a lot of other WNs (though he is at pains to point out his is not a WN philosophy), but a good portion of Ronin's group are American.

We just find it all so very interesting.
Posted by Nosferatu200 at 00:34