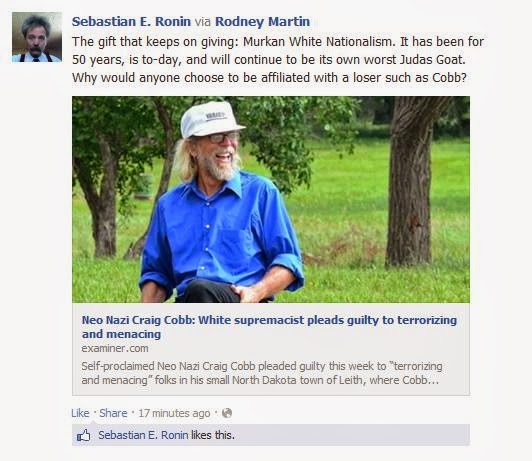 
As much fun as these are, these two are a laugh riot: 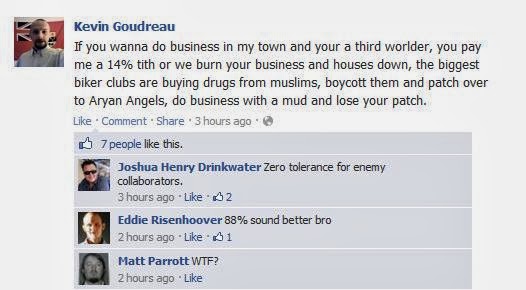 Yes, he now claims to be running a biker gang in addition to being the "chairman" of the largest White Nationalist organization in Canada.... though again we note he seems to be the only member.

But though we could spend all day just laughing at the Goudreau, there was a post on his profile that got us thinking:


We had mentioned that Dean Clifford had been arrested in November while he was conducting a seminar in Hamilton, but we hadn't really looked into seeing what his legal status currently was for some time. So we decided to find out if there has been an update.

1. He's still in jail in Brandon
2. He believes that he's winning.

There are a lot of exciting things planned and in the works as well outside of this case in regards to the law movement. There are also going to be a lot of changes as well to say the least. Everything is just going to get catapulted now in regards to everything to do with the process and how to attack this and what people can do to get out of the system and advance before people can start doing their own things so these pitfalls don’t happen is absolutely going to be perfected by the time Dean is out of this.

The last 3 months in Canada have been the coldest on record that Dean has been in jail eating jail food. So much for global warming and the 90 years of records aye. Beats working on construction job sites getting frostbite.

Out of this, processes will be perfected so people will be able to more efficiently avoid or defeat statutory charges from a foreign corporate democracy, statutory jurisdiction and all the corporate bullshit from now on. Therefore this is time well worth spent for him.

When he is out, he will be working on the law movement fulltime and more some. Even if he is in jail for another month, he doesn’t care and things are still getting done on the outside to be ready for launch.

It is interesting to see how pathetic how these attempts are to try and silence people, they really have nothing. Like Dean said, their biggest tactic to date is to deny all access to a notary, which is an obstruction of justice he might add in which he has a complaint and may turn into a claim against the ombudsmen, which they aren’t doing anything about it either, they are obstructing Dean purposefully from getting access to a notary and therefore the judge can ignore everything his filing. So obscuration of justice is blatant and a direct violation and affront to his rights.

They have also been instructed to ignore everything you say in court and say “Oh, that’s nice, and continue on unabated”, of course things that were said are not recorded on the transcripts and even the audio records are denied and some BS legislation was passed years ago that deny the audio records of the hearings also. All they want to do is convict you no matter what you say. But despite this, they are still desperately trying to get joinder, they are having financing issues on all accounts as well which has been stated too which a side deal must have been made to cover court and jailing costs. Dean has still refused to accept application for bail as well.

It isn’t as if this stuff doesn’t work and things would be worse to accept their jurisdiction but they are doing their absolute utmost to violate every possible law they can without getting busted just so they can deprive people any possible remedy in the courts. There has been all sorts of positive news as well which Dean didn’t have time to get into right now. The letters are still coming which are great and very much appreciated.

Counter to that, there has been all sorts of positive news as well which he will get into later, but many are getting their infringements and offenses dropped. Mostly because they want to keep people believing in the system and maintain some sort of legitimacy but the reality of the situation is it is rotten through and through.

Dean certainly is a glass-half-full sort of guy, ain't he?

There's a fair bit of data to suggest Dean is not being honest to his customers about Dean and Darren's situation:

Both are lengthy message threads but do address Dean (and Darren's) ongoing litigation.