Paulie Quite Inadvertently Stumbles Upon the Truth

Well it's that time of year when Doug Christie hosts yet another misnamed George Orwell Free Speech Award Dinner (misnamed not in the sense that Orwell opposed freedom of speech, but in that as a committed socialist opposed to totalitarianism in all it's forms, he would likely be disgusted that his name was being used to honour people who share the same ideology he risked his life opposing during the Spanish Civil War). Past, ehem... winners of this, uhm.... prestigious award include Marc Lemire, Ernst Zundel, Paul Fromm, Doug Collins, James Keegstra, Malcolm Ross and, our good friends and faithful readers, the Fourniers, among others.

Because misery loves company, Collins and co. awarded the prize to another worthy recipeient:

Wow. Did not see that one coming. We had Bill Whatcott in our George Orwell Free Speech Award pool, but it looks like he`s just going to have to be satisfied with the award for Best Sound Editing.

For those who are unaware of who Ms. Cecilia von Dehn is, we shall direct you to the following links:

Well there you have it! Clear conflict of interest! Doug Christie hands out the award to his client. There's a financial link! This is almost as bad as Pia Zadora being awarded the Golden Globe award for "Best New Star of the Year."

Whatcott should demand an investigation!

Well, Paulie decided to announce the award on his Facebook profile. Let's see who can be the first to spot the irony, shall we? 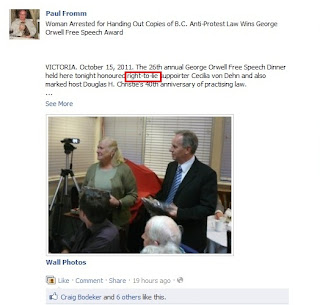 Not content to make this lone Freudian slip, Paulie compounds it by posting it again on another hate site:

You, as well as your intellectual laziness, are the gift that just keeps giving.

Update: We copied the above screen shots before midnight on October 17. Now, we have no illusions that Paulie is as faithful a reader as some of the boneheads who still inexplicably respect him, but one would think he might decided to proof read his post to Stormfront after we made fun of him earlier in the day:

After one too many glasses of that delightful red drink, the keys probably become a bit blurry.

"Thanks again for the donations!" *burp*