Time for more true facts that are completely accurate and truthful from Paul Fromm: 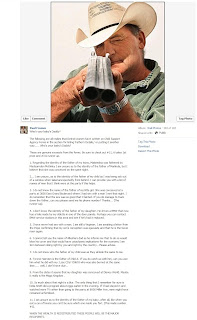 Aside from the fact that Paulie appears to believe that gang rape is a subject that people should find humorous and as a source of ridicule (see #2), he does hit on all the areas designed to enforce the otherness of non-Europeans:

1. Proclaim that the information he has posted is true.
2. Sets it in Detroit, a city with a high percentage of African-Americans.

4. Provided information that reinforces the perception that African-Americans are promiscuous.

5. Ends with a moral lesson that, "these people are not like us and 'we' hard working, moral White folks are supporting these inferior baby factories."

Yep, all the ducks in a row and confirming, in the minds of Paulie and all the bigots who agree with him, everything they already believe about people of color.

Then again, there might be a few problems with his claims here. Let's take a look again at what he posts as truth (which he also posted on White News Now): 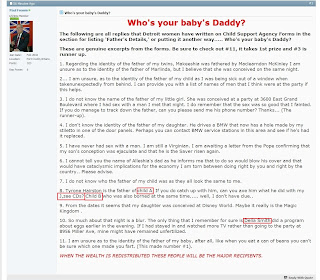 First thing we noticed is that the woman in #8 appears to have forgotten the name of her children. Even on our worst days, we usually can remember who our kids are. And then we might expect a fan of Jay-Z would actually know how to spell his name. In this case it looks like a 60 year old white dude was trying to spell the name of someone he knows, "the Blacks" listen to, but he couldn't be bothered to find out how to spell his name.. But the real clue that Paulie's list is bs would be that someone states that shewas watching a program featuring Delia Smith the night her child was conceived.

Uhm, Paulie, why would an African-American woman living in Detroit be watching a British cook and television presenter?

Whoops! Forgot that didn't you?

The truth, of course, is that Paulie is either really stupid and will believe anything that negative about minorities that he reads, or he is purposely lying to the people who follow him.

Here is the original list. Notice that it refers not to Detroit at all, but the the UK:

Paulie, why do you feel you need to lie to your followers? Do you have that little faith in them? And would you make the same claims about British women that you just did about African-American women?

Don't bother answering. We already know.
Posted by Nosferatu200 at 21:32

Even the boneheads know Fromm is a special kind of stupid.

To anyone who has money to send to Fromm, please contact me first.

I have an excellent investment opportunity available. I am the descendent of a wealthy prince in the middle east, and I urgently need to transfer $10,000,000 to an account in Canada. I have chosen you as my assistant because I hear you are very trustworthy. You will get 20% commission for your assitance. I can be reached by e-mail at:

Sincerely,
Descendent of a Wealthy Prince

NOTE: This is NOT a scam!

I like that Paul believe these women were drunk enough that they couldn't remember the man they had sex with, but they could remember the precise address of the party they were at.