On May 8, 1995, Holocaust denier Ernst Zundel was the victim of an arson attack on his Carlton Street home (known as, "the Bunker") which resulted in substantial damage. The only group to claim responsibility for the arson was an extremist group that had been linked to the Jewish Defence League, though the group in question actually hadn't been active in close to two decades.

Not long after, it began to be circulated in neo-Nazi and racist circles that the ARA had been responsible for the crime, a charge that has been repeated (without any evidence to support the accusation) for the past 16 years. In fact, as we point out in our recent timeline detailing some of the bonehead violence during the past 20 years, it is one of the three claims that Free Dominion brings up in their effort to paint the ARA (and, because we are focused on fighting racism as well, us too) as violent terrorists.

Well, one of our readers noticed this and sent us an article that this individual had saved concerning the accusation. In short, that dog don't hunt: 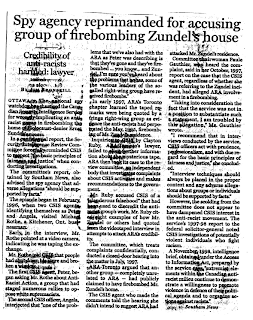