Hey, remember in the article from October 5 how we exposed (again) the crazy that is Kevin Goudreau using his own words? Among the really damning screen shots from Stormfront we also included some funny posts he also had been making on his own Facebook profile. Like this one. And this one. Oh, and how about this one? Can't forget to include this one here.

You know, we think that we might have upset Kevin: 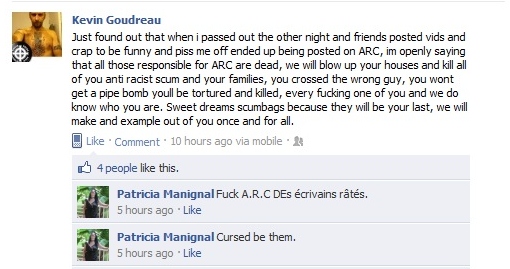 Shall we dissect Kevin's missive? Yes, we believe we shall.

Oh Kevin, who are you kidding. You don't have any friends. You know full well that you posted these Facebook messages yourself, probably while drunk and alone, and are now desperately trying to make excuses.

im openly saying that all those responsible for ARC are dead,

Well we appreciate that you would admit to an act of murder before it has been committed, but we aren't all that concerned. Actually, we aren't concerned at all. You once ran away from Alicia Reckzin, a woman who has less muscle-tone than a meth addict during the latter part of the addiction, and "Nazi Mom" when they confronted you. Yes you, the "Chairman" ran away from two little girls. And we mean little. Tiny in fact.

we will blow up your houses and kill all of you anti racist scum and your families,

Hey, what's with this, "we" shit? We've already established that you don't have any friends. Don't you think that your self-delusion is really unhealthy? And having murder fantasies is the hallmark of a diseased mind.

you crossed the wrong guy,

And you use a lot of comma splices in your threats. Might we suggest calmly sitting back and thinking carefully about how you plan to brutally murder us, then write it down? There really is no good excuse for bad writing mechanics.

you wont get a pipe bomb

You see this is what happens when you don't calmly consider what you're writing. You've already contradicted yourself. Earlier you wrote that you were going to blow up our houses, but now you write that we will not, "get a pipe bomb." Well, just how do you plan on blowing up our houses? With your mind like Darryl Revok [NOTE: NSFW or for the kiddies, so best not click on the link if either is an issue]? We love Michael Ironside too, but you do know that "Scanners" was just a movie, right?

youll be tortured and killed, every fucking one of you and we do know who you are.

No Kevin, you do not know who we are. If you knew who we were, you wouldn't keep saying so. In fact, if you were smart, you would keep that knowledge to yourself and lulling us into a false sense of security, using it only when it would best advantage you. Or if you did know who we were, you might also post that information so someone else could carry out the dirty work that you would be unwilling to do yourself because, let's be completely honest, you are a coward. Finally, we know you have no idea who we are because, if you actually did know, you would never dare to make such a threat.

Think about that last point for a bit.

Sweet dreams scumbags because they will be your last, we will make and example out of you once and for all.

We did sleep soundly last night. As we will the next night and the night after that and after that.
Posted by Nosferatu200 at 11:48

wow he's a smart one.