What Does Calgary's Blood & Honour Hate Group Have in Common With MPP Randy Hillier and Ontario P.C. Leader Tim Hudak?

Now, to clarify. We don't think that either Hillier or Hudak would support the values of Kyle McKee's Blood & Honour gang. Well, at least overtly. But upon reading our friend BCL's latest post regarding what he termed the "turmoil" in the Tory camp, Goodall's name jumped out at us.

BCL goes into a little more detail, but to briefly bring our readers up to speed, MPP Randy Hillier posted a link to a blog article by Jeff Goodall which called former P.C. premier of Ontario Ernie Eves a  "pinko re-tread" who is trying to sabotage his former party low led by Tim Hudak. Hillier later clarified that he did not write those words himself, though it does appear that he agrees with him (unless he has someone else running his Facebook page who has gone rogue on him). However, when we became interested is when BCL noted Goodall's posts regarding race. In one post, Goodall reprints an article by Kevin MacDonald, a professor at the University of California, Long Beach that makes the claim that African-Americans are simply not as genetically smart as whites and no amount of education will change that, "fact." MacDonald has also made some rather pointed remarks regarding Jews and pushes the canard that Jews wish to outcompete and disposes the white majority (here, here and here). Not surprisingly, most of his colleagues that the University of California disavow his views as racist and antisemitic. The second post BCL links to comments where he makes generalizations about black Canadians:


And in Toronto, I have been in clothing stores in predominantly Black areas where I had to pick my way around merchandise lying on the floor. Blacks would take clothes off the rack, look at them, and if they didn’t like them then rather than hang them up again they would simply drop them on the floor.
Something to consider when contemplating our “open-door” immigration and refugee policies.
As we read BCL's post, we couldn't help but think that the name Jeff Goodall sounded familiar. Then we remembered where we saw it.

A month ago, the violent racist gang Blood & Honour began another flyering campaign. The flyers contained what would appear to be inaccurate claims about immigration made by the Fraser Institute. McKee and his followers got their wish for publicity though, as well as an approving shout out from Jeff Goodall:


According to the introductory page of the “Blood and Honour” (actually “28Canada”) website, “The following webpage deals with mature and often controversial subject matter of a political nature. If you are easily offended, under the age of majority, or in a country where such content is deemed illegal, we would recommend not viewing this site.”
Under “Announcements” they also have this to say:  “Keep in mind that while we at Blood & Honour Canada don’t care what method you use to put them (leaflets -JG) up, the police might, so to avoid any legal troubles on our part we ask that you work within the laws and by-laws of your city when pasting them up. So as much as glue or flour & water (wheatpaste) are exceptionally effective, cheap, and efficient, we ask that you spend your hard-earned money on tape so that the cops and ‘Anti-White’ organizations can remove them with relatively no effort.”
In my opinion, “Blood and Honour” displays far more class than the Calgary police.
Jeff Goodall.
Sure, class. If this is what class looks like: 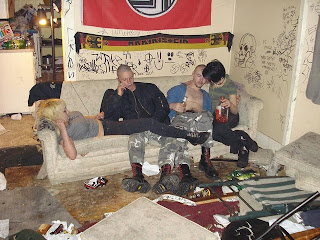 Or if this is what class believes.

Or if this is how class behaves:

We also wonder if it is classy to tattoo your desire to murder members of an identifiable group like, "classy" Kyle McKee has: 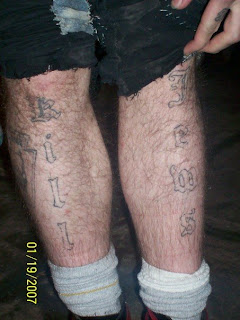 Hmmm. Jeff Goodall considers Blood & Honour, led by the guy who tattooed, "Kill Jews" on his shins, and he approves of Kevin MacDonald who perpetuates the lie that Jews are out to get "whites."

do the neo-nazis work like a job? or are they the one's who do there share of B&E's around Calgary? I'm damn will know for sure they sell meth and make it. scum bags

so I'll take that as a no they don't have jobs? I'm still asking so do they have any sort of job besides crime?.

Kyle is a washed up publicity hound.Just a little twerp that does his jail time in segregation.Have to wonder about him and boxcutter billie knoble spending all their time with underage kids...........

The first anon, I doubt very many of them hold down full time employment. Employers generally frown upon leaves of absence for court dates and jail time. Not to mention criminal records and perpetual hang overs.....

What's the difference between the bloods, the crips, and all of these skinhead gangs?? Only the colour of their skin. Their minds and their actions are pretty much the same.

The biggest difference to me is that at least the Bloods and Crips have, at times, put away the hate. It's situational for them, not trait based.

funny thing about Neo-Nazis is they took credit about other persons did to make a good or stable country, they don't make nothing to maintain that greatness and say only people I want can have this and they could be just lazy kids complaining about race.