Don't Worry Marc! Tomasz Winnicki is On the Case!

Sometimes, we just have to sit back, smile, and marvel at the thought process that boneheads undergo when trying to be all strategic and junk. A recent example is Tomasz Winnicki and what we have to imagine must be his unsolicited pro bono work on behalf of Marc Lemire. In this example, Winnicki seems to think he has the case that might prove to be the lynch pin in taking down Section 13 of the Canadian Human Rights Act:

Now, for our readers not in the know, you can learn about the Warman v. Wilkinson CHRT decision here, or, what might be more fun, you can read about Bobby's own take on the complaint which he posted to Stormfront not long after the complaint was made: 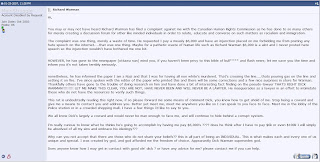 Bobby James makes a few claims here. First that calling him a Nazi is libellous. Second that Richard Warman (who went to law school and passed the bar exam) isn't really a lawyer. Third, that he can't wait to meet Warman to give him a piece of his mind:

Right. Except that when he COULD have faced his accuser, Bobby instead decided not to attend the hearing and, when they went to serve him with the hearing notice, he literally hid in his apartment and refused to open the door.


Oh, but Bobby doesn't like being called a Nazi.

Uhm, except... you know... except for that thing he posted on Stormfront:

Yeah, but other than the fact he wanted to start a movement called the Canadian Nazi Party, there is no evidence, though we gotta tell ya, this is pretty significant evidence to support the claim against Bobby.... which might be why he never actually sued and if he had it would have been laughed out of court with Bobby paying the court expenses of those he tried to sue.

And this is the guy you think will be helpful to Lemire's case, Tomasz?

Tell you what? We actually have Bobby James Wilkinson's last known email address. If you contact us Tomasz, we will give it to. Honestly. No strings attached and no trickery on our part. We can't be sure it Bobby still uses it, but at least it's a lead for you.

It's just that we really want to see the circus you're trying to turn this all into.
Posted by Nosferatu200 at 21:13