Appeal of the Tremaine Decision on Monday, September 19 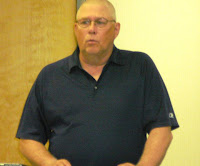 Our dear readers will remember that the CHRC wasn't successful in the contempt motion against Terry Tremaine. As such, an appeal of the Federal Court's decision was filed soon after
The Federal Court of Appeal has set that hearing down for Monday, September 12, 2011 at roughly 9:30am at the Pacific Centre (701 Georgia St, 6th floor) in Vancouver, BC.
When the original hearing took place, about five of Tremaine's supporters attended the hearing. Might be interesting to see how many attend this one now that it is on the mainland. 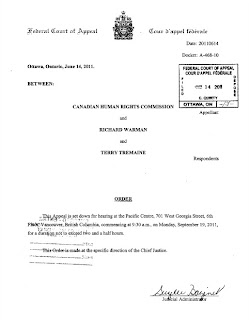 The Federal Court of Appeal will hear an appeal of the Nov. 2010 decision that neo-Nazi Terry Tremaine was not in contempt of court by continuing to post Internet hate propaganda despite an order to stop doing so. The hearing is in Vancouver on Monday, 19 September 2011 from 09h30 to max 12h00 at the Pacific Centre, 701 Georgia St, 6th floor.


Background: I have filed a number of federal human rights complaints related to the spread of Internet hate propaganda which is illegal in Canada. In 2004, I filed a complaint against Terry Tremaine, self-appointed leader of the latest incarnation of the Canadian National Socialist Party. The complaint alleged that Tremaine and his group were spreading voluminous Internet hate that included calls for ethnic cleansing against non-whites and Jews in Canada.


The complaint went to a hearing before the Canadian Human Rights Tribunal. In their 2007 decision, the Tribunal upheld the complaint that Tremaine had spread illegal hate propaganda ruling:


F. Conclusion on the section 13(1) complaint
[140] Having looked at these messages in context, I have no doubt that they are likely to expose persons of the Jewish faith, Blacks and other non-white minorities to hatred or contempt. The underlying theme in the Respondent’s messages is that Jews, Blacks and other non-whites are destroying the country and that they should either be deported or segregated. They also refer to the threat they represent for white civilization. Members of the targeted groups are described as vermin, a disease, parasites, criminals, scoundrel, embezzlers and liars. They are portrayed as dangerous and, in some cases, intellectually inferior.


[141] These messages convey extreme ill-will to the point of violence towards the targeted groups. Nothing in these messages allows for any redeeming qualities for members of these groups. The members of the groups have been completely dehumanized. Consequently they may likely be the object of hatred and contempt.


The Tribunal issued a permanent cease and desist order (an injunction in effect) to stop spreading Internet hate. The Tribunal’s order was registered with and became an order of the Federal Court for the purposes of enforcement. Tremaine maintained his existing hate propaganda and continued to post new material.


The Canadian Human Rights Commission (CHRC) and me brought a motion for contempt. For reasons that centred largely on when Tremaine had knowledge of the Federal Court order and what it required him to do, in November 2010, the Federal Court found Tremaine was not in contempt.


As noted above, the CHRC has brought an appeal that will be heard on Monday, 19 September 2011 before the Federal Court of Appeal in Vancouver.
Posted by Nosferatu200 at 12:26

We repeatedly witness it---Inciting hatred on the internet against Blacks, Jews and Muslims does lead to violence, most recently in Norway. When are Governments going to wake up and deal with this problem effectively?
My Heartfelt Gratitude goes to those Courageous Individuals who are trying to fight this Hate through legal means.