Guess Who Is Out Of Jail Now

Hot on the heels of news that Kyle McKee had once again been jailed, we learned that another one of our favorite subjects had been released after serving his sentence: 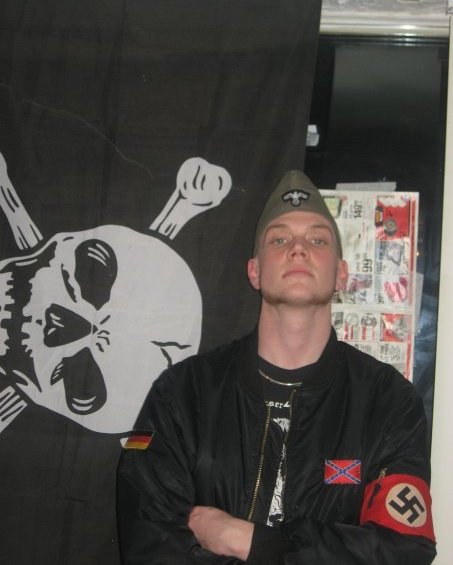 Richard "Lurch" Martin, who plead guilty when the case went before the judge, was released a few days ago after serving 9 months for ethnic intimidation:

An Ontario Court judge says there are not enough words to describe two men who spewed hateful racial slurs at a young black woman as she walked down the street with an 11-year-old girl.

“Despicable, abhorrent and heinous are only a few that come to mind,” said Ontario Court Justice Richard Jennis of the July 16 incident.

Shane Gill, 38, a sheetmetal worker, and Richard Martin, 23, an unemployed labourer, pleaded guilty Tuesday to criminal harassment after they taunted the woman and child with the words: “We hate niggers.”

Assistant Crown attorney Michael Fox had called for the stiff jail terms, arguing that it was an aggravating factor on sentencing that the crimes were purely motivated by racial hatred and the colour of the victims’ skin.

Fox had sought the higher sentence for Martin because his harassment had been ongoing for several weeks and had targeted the young woman when she was home with two young nieces.

“If there had been any actual physical violence, this sentence could have been measured in years and not in months,” Jennis told the convicted men.

The woman who was target of the harassment said outside the courtroom that she was impressed by the way Hamilton police handled her complaint and by the judge’s reasons for sentence.

“Yes, I’ve been really impressed with the police response and the sensitivity shown and the professionalism,” she said.

“I think the judge’s sentence was fair. His consideration for the two men was fair and it does send a message that this is wrong,” she said.

Here are the links to the posts we made on the subject:
Now, after having spent a significant portion of 2010 and 2011 behind bars, we would like to believe that Martin might have taken the time to re-examine his life and perhaps decide that the path he was currently on was not one that would ultimately lead to self-actualization, happiness or success.

Of course, that would assume that Martin was capable of such introspection, which he isn't, so instead of taking responsibility for his behavior, he has opted to blame someone who he believes told on him: 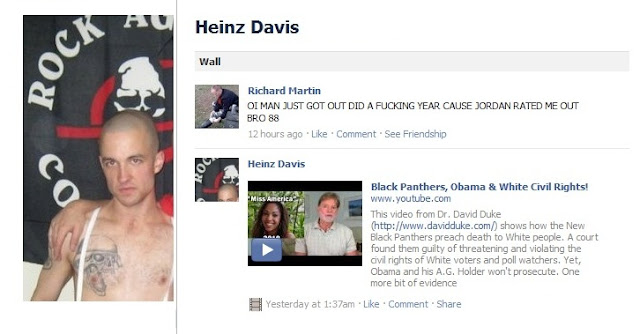 Martin posted this on his buddy Andrew Benson's Facebook profile yesterday. He goes into more detail on his own profile (keep in mind when you read this, dear readers, that he did plead guilty and there were other witnesses... such as the family he was harassing): 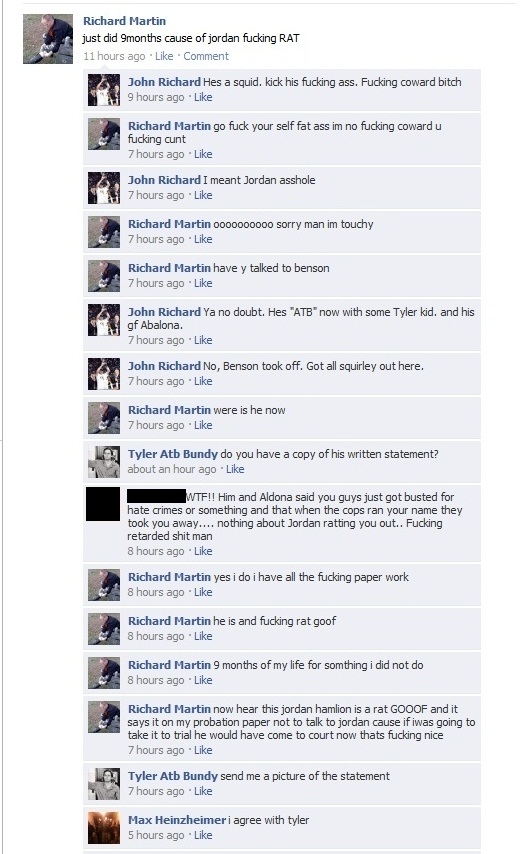 Right. You're the victim Lurch. It's also evident from the first response to John Marleau that Martin didn't take any remedial reading comprehension courses while in jail.

Our dear readers need not be reminded that Martin sort of has a history of publicly bragging about his crimes. This probably isn't going to help: 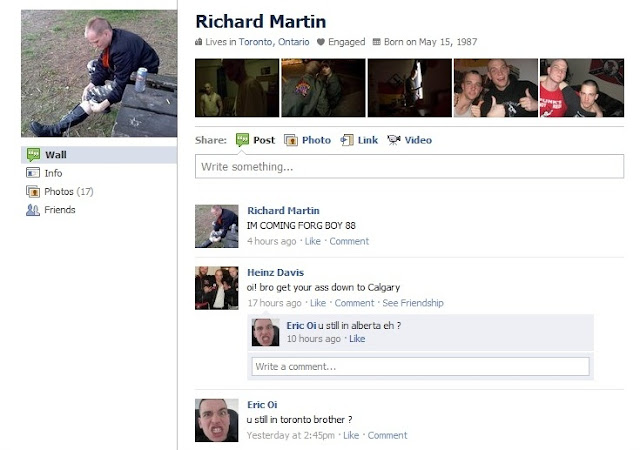 You know, it often is really hard for us to decide which of the boneheads we cover on this blog is the most idiotic, but we have to say that Richard Martin really is the reigning and defending champion here.

And the kicker? He's already planning on moving to Calgary.

UPDATE: It looks like one of the individuals accused of having, "rated" on Martin (we presume it may be Hamelin's girlfriend) has a much different take on what resulted in Martin's stay behind bars: 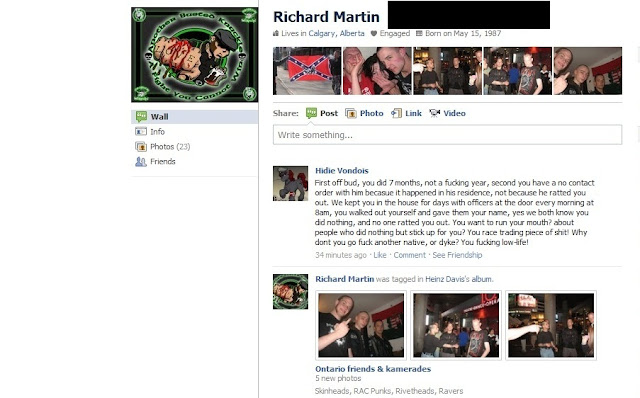 However, as he felt that this didn't fit the narrative he was spinning, Martin seems to have decided to remove it. As a service to our dear readers, we managed to save the screenshots before we found our access to Martin's Facebook profile, well, we'll say became limited: 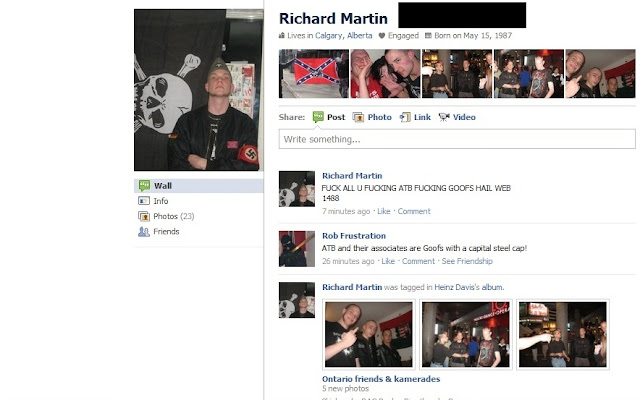 When Richard Martin was asked to prove that Jordan '' ratted '' all he had to prove of this accusation was a no contact order with Jordan for one year on his probabtion. When he was asked were the evidence was to prove that Jordan did this he responded with the ''cops told me''. Richard should make 100% certain what he is saying and broadcasting over the internet to be true. There was no statement from Jordan in writing, nor was it ever brought into court. Weird.

I don't see what Jordan has to do with this. Rich was in jail for harassing some lady... She would have reported it.

It's hilarious to see how much ass they kiss with each other.

I'm confused.
Rich is stating "Hail WEB", how did he connect with them?

my guess would be through benson. I doubt the shit between rob and him will last. rob has about as much conviction as a bottle a booze. him an tyler sturrup are a perfect excample of that.

Oh great!
Because we need more of these retards from Ontario coming here!

As for Rich connecting with WEB through Benson, that's kinda interesting because I did hear Rob was gunning for Benson's blood. But like the other person said, Rob doesn't seem to have much conviction when it comes to his word. It's apparently as solid as a wet noodle.
Pretty sad. Kyle's a rat and he backs up what he says more than Rob does.

"Didn't Tyler Sturrup tell Rob to go fuck himself?" wow lol still not sure where you guys get your info from but it is consistently flawed.

To those questioning Richards posts about Jordan. The lady who charged Richard was one of Jordan's neighbours. Before Jordan got evicted from the neighbourhood.

"wow lol still not sure where you guys get your info from but it is consistently flawed."

You might need to learn the difference between a question asked by an anonymous reader and information published by the members of ARC.

In all fairness Nos, the majority of "info" you people post here is mostly here-say and Facebook screenshots. Hardly any real evidence of what these "boneheads/fascists" are really up to. I wonder what you would blog about if we all decided to delete our Facebook and Stormfront accounts..

You really think that this is all we have? Sorry, we don't publish everything we get. You can choose not to believe that, of course.

As if any of them would delete any of their accounts, or curb their online activities. They thrive on the shit, drama and rumours. You'd think they'd realize that being so 'in the open' is not too bright, but FAK, they are dense lot! Not that I care, because personally it's fecking hilarious to watch these weekly internal struggles and meltdowns.Give any of them enough rope, and they'll hang themselves!

These punks Richard Martin and Jordan Hamelin and their associates are all a bunch of uneducated freeloaders. My apologies to the families that suffered in this incident, My involvement with these clowns cost me dearly, involvement being a night out drinking with them. Lived in same rooming house as i was working at the time, had no prior knowledge of the continuing harassment going on. No excuses all I want to say is I am truly sorry to these people who had to hear and feel the things of that night. And if it matters Jordan is a Rat. And a coward. The police told me he was scared of me and they put a peace bond on me as well. But who cares. Hopefully they see the wrongs and turn there lives around.

BY THE WAY YOU ANONYMOUS PUSSYS, JORDAN RATTED ON HIUS SO CALLED COMRADES AND MYSELF AND OF COURSE THERE IS NO STATEMENT BECAUSE IT DID NOT GO TO TRIAL, AND WHEN THEIR IS A NO CONTACT ORDER ITS BECAUSE HE WAS A WITNESS, YOU GUYS ARE ALL COWARDS AND NEED TO FIND A NEW WAY IN LIFE. TAKE RESPONSIBILITY FOR YOUR ACTIONS, REALIZE WHATS GOING ON HERE. YOU ALL HAVE THIS BROTHERHOOD UNTIL THE POLICE GET INVOVLED THEN SEE HOW STRONG THAT IS. THE WALLS WILL COME CRUMBLING DOWN AROUND YOU AND YOU WILLBE POINTING FINGERS. MY SELF WOULD DO ANYTHING TO TAKE THAT DAY BACK AND MAKE THINGS RIGHT. PEOPLE WHO KNOW ME KNOW THAT WASNT ME. IM PROUD. PROUD THAT IM NOT A PART OF YOUR SICK COMMUNITY

amazing how you do not want to post comment i left you on an apology for my actions. I guess you don't agree with moving on and just like to fuel the fire thats fine it goes to show you how far you people will go. I have never been a racist and if people believe everything they read from the hamiton Speculator then we are in trouble.

Dude, have a little patience. We're sort of down a few people right now and can't update as often as we did in the past.