We've been pretty quiet about Blood & Honour (Aryan Guard) for the last several weeks. They still seem to be planning a public march on March 19 of this year and are bragging about the possibility of a number of boneheads from Ontario and Quebec making the journey to attend. However, the public posturing might be masking a deep divide within the group that has resulted in yet another split.

Things appear to have reached a breaking point over the issues of drugs and a past relationship with a First Nations woman (and a child that resulted from the relationship), resulting in a final blow-up between Lee Ebel and Jessie Lajoie. The other members of the racist gang split in their support of the two men. On those who sided with Lee were Kyle McKee, Natalie S., Shannon Butt, Jordan Dowe, Mike Gaio, and Karine Raymond. On Jessie's side are John Marleau, Brent Goldring, and Courtney B.

There hasn't been any online chatter to confirm whether this all is true, however circumstantial evidence points to the strong possibility that the information we received could be factual. Our readers may remember us making fun of the B&H (AG) crew for their ill advised poster advertising a New Years eve party. Those who attended the party all belonged to the faction rumored to have sided with Lee Ebel: 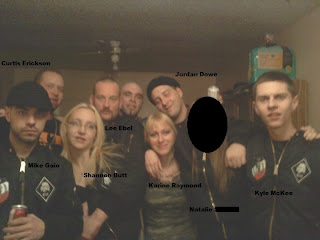 Based on this photo, we can assume that Marleau, Lajoie, and Courtney B. didn't attend. Other circumstantial evidence includes the fact that when one looks at their respective, "friends" list on Facebook, one can't find members of the alleged factions on each others list. We admit this would be weak evidence if not examined in the context of the other examples also provided.

Something also interesting which may or may not be related to this apparent split. John Marleau, who is currently attending SAIT classes and completing community service, had become a moderator on the Blood & Honour forums a little over a month ago. Before becoming a moderator, Marleau had been a fairly prolific poster there. Our readers can imagine how pleased Marleau would have been to be made a moderator, and yet, when we checked his status there recently, we found his profile looked like this: 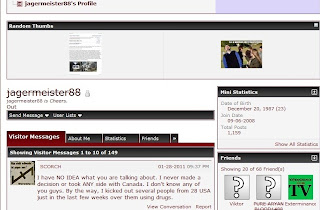 Marleau (who's last public post on the forum appeared on January 20) has either quit as moderator, or he has been banned. As for what user SCORCH is referring to, we assumed it was the conflict between the British Columbia faction of B&H and B&H (AG). However, it could perhaps be related to the split in the B&H (AG) faction. Our guess is that it is still the former rather than the latter, but given what we've learned there is certainly grounds for speculation.

None of this appears to be diminishing the efforts being put towards a march taking place in less than two months time, however it does create a great deal of uncertainty.
Posted by Kurt Phillips at 21:43

Marleau isnt white, also half those guys are druggies

The guy at the back of the picture's name is Dana. He got son pulled out of the house after he went to school in full neo-nazi garb.

I know y'all don't follow Goudreau's pathetic attempt to materialize the voices in his head, but thought you'd find this entertaining at least...

Hey Clay, you still rocking out the beats?

Wow Shannon Butt, went to High school with her. Didn't used to be racist, as I recall she was Metis. To bad she is so self hating. And they say white anti-racists are self haters. Seems to me she hates herself so mush she'll let hate enter every orifice of her body at the lowered "expectations" night.

I believe it was "lowered inhibitions" not that its any better.

Who is the guy behind Lee Ebel? His Full name. Dana ? When was this photo taken. Just wondering if its recent. Is this the new B&H members?

I'm pretty sure McKee has no facial expressions other than the terminally dumb one he has in this photo. Seriously, every picture of him, it looks like he's saying "Huh?"

They said New Years in the article. So yes I'd assume it's the current membership.

I personaly know dowe and he's not a bad guy. he got mixed up in some trouble a few years back, lost both his parents, went to prison and these guys took him in. Guess he feels he got people he can relate to.

I also went to high school with Shannon, she's not metis or racist. She just pretends to be whatever anyone wants her to be. Which is just what these kinds of people prey on.

Amonymous #13:
As far as Shannon, how can you figure that she just joined up because people wanted her to become involved with White Power activism?
Okay, so you went to highschool with her, but that doesn't really mean anything.
I went to highschool with a girl who is involved in that movement. Most people thought the same of her as you do of Shannon. But it turned out that she was just good at covering up what she thought to avoid trouble in highschool.

What a pussy-ass looking click... are these guys for real? or is it just a bunch of redneck wannabe thugs? I highly doubt they run shit all... probably like to run their mouths more then run the streets...

I wonder are these the people that would show up around the seed and crazy donkey bar. If memory serves right picking on the homeless

It's funny... where I come from skinhead are more bigger and White... anyway... poor kids