Bill Noble. We Have No Words

You know, sometimes, we really don't need to say or write anything.

We especially enjoy the photo he decided to include. Sure, it does add a bit more crazy to the mix, but we're sure Billy has a perfectly good explanation for wanting to include it rather than, say, one that doesn't make him look bat-fucking insane. We'll let Bill explain: 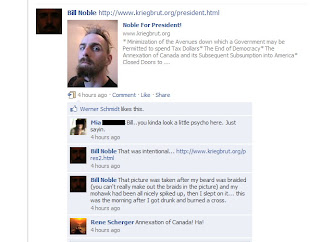 And he was considered the intellectual of the Aryan Guard.

April Fool joke? Come on! It has to be an April Fool joke! No one could be this self-deluded. Right?
Posted by Nosferatu200 at 12:38

Hard to tell if this is Noble's stab at an April fools joke or if it's his attempt at serious political commentary. Everything he does seems like an April Fools joke.

Can't help but notice the City of Calgary's buddy Rene Scherger is commenting on Bill's post.

So much for not being a racist?

Joke or no joke, Bill lost his mind sometime ago. Also interesting to note that Rene Scherger is chumming around with Bill. Not that we're especially surprised or anything. Thanks for the amusing pics ARC. Have a great weekend!

It probably is an April Fools Day joke... but... this is the same guy who wanted to start a white colony in Antarctica and eventually in outer space...

OK, OK I get it. The poor sod is mentally ill.

Lmao he does look bat-fucking insane!

Pure fucking comedic gold! There is no end to this man's delusions. Thank you ARC.

What a clown. Watch out for Boxcutter billie. LOL
What does that skinny little twerp weigh? 120? He wasnt acting like this when he did his jailtime in protective custody. Pathetic really.Odd he isnt in jail for posting on the internet??? lls like a RAT to me.

Bill has finally lost the plot.

this guy is a joke.120 pounds of hot air. spent his jailtime in protective custody.hangs around underage kids...and isnt the little twerp violating his probation.smells like a rat to me.