We received a message from the photographer who took the picture of the bonehead and who the media claim was struck in the head:

I had to give a police statement about Willis hitting my camera from my hand with his skateboard but the article says that he hit me in the head which is a complete lie. I wish I had a way to contact the author to get the article changed... Two nazis showed up near the beginning and were peaceful and did some interviews. A Nazi girl showed up later and got arrested and taken away and I have her photo as ARA surrounded her and then there are pictures of her in city hall getting frisked. Later, Willis showed up and that is where he hit my hand with his skateboard and got arrested.

We also received a number of pictures taken by the photographer. We won't post all of them now, but we will post a few of the photos relevant to the statement that was made to us: 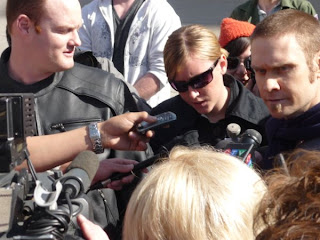 The two men, far left (Jonathan Besler) and far right (Leyton Bertsch) on the photo, are the individuals whom the photographer wrote were the two Nazis who were peaceful and did some interviews. 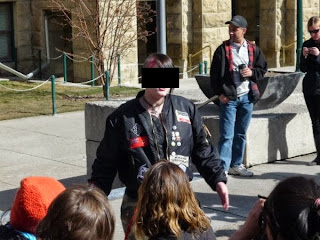 This is a photograph of K.H., a bonehead originally from Ontario with whom we've had some contact with in the past. She was "dating" Robert Reitmeier for a brief period until he apparently, and unceremoniously, tossed her aside. 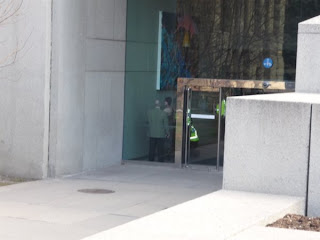 K.H. being frisked after being taken away by the police. 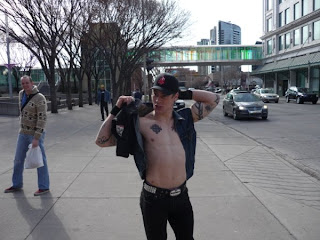 Jesus, does Willis own a shirt? Yep, Willis again. He was the one who, after this photograph was taken, took a swing at the photographer with a skateboard, knocking the camera from his hand. Willis was arrested soon after this photo was taken because of the incident.

If you have pictures for us, you can send us your email and we will get in contact with you. Just post your email as a comment. We will not allow your email to be posted and when we contact you, we'll provide you with our contact information.
Posted by Nosferatu200 at 15:58

He's too sexxxy for his shirt. I'd like to see him on the catwalk.

Too sexy for his shirt, the way he's disco dancing?

Willis was doing an ad for AXE and he got outed! Too bad!

That girl kept replying to things she didn't agree with, by saying Nein. As soon as she was fully circled and swinging her zeig hails around, cops came in and dragged her off.

Willis, oh willis, the fact that that dude shows up after talking to the media about being innocent and no longer being a nazi bla bla bla, is astounding. He was hauled off within 30 seconds of being there.

I will have videos for you soon, including one involving nazi girl, and the other involving layton, the layton one is about 17 minutes long.

He's a model, you know what I mean?

I wonder if he waxes that chest?

LMFAO! albanians are white. look it up ;)
and im German, Danish and Albanian. do your homework ;)

yeah.. did you think I was gonna be locked up for the night? lol,
you guys were really fucking happy when I got arrested eh? ..so much for fredom of speech..

you know its so cute how you guys were so tough today when it was just me and about 50 of you..

HAHAHAHA! well Im not a turk or a muslim... so keep on talking. doesn't bother me.

mikie posts on the AG forum...

Considering the fake 'Combat 18' Calgarys membership consists of cheeseburger terrormachine who is in fact Metis, I seriously doubt they would have any trouble letting a Muslim into their ranks.

Correct me if I'm wrong, but didnt Willis get his ass KO'd near this very spot a couple years back?

That hairless weasel was featured in the Calgary Sun. He's NOT a skinhead, he swears that tattoo is JUST a celtic cross. I always find it funny how the tough guy act vanishes when the light is brought out on these roaches.

"yeah.. did you think I was gonna be locked up for the night? lol,
you guys were really fucking happy when I got arrested eh? ..so much for fredom of speech.."

Let's turn to the constitution:

2. Everyone has the following fundamental freedoms:
(a) freedom of conscience and religion;
(b) freedom of thought, belief, opinion and expression, including freedom of the press and other media of communication;
(c) freedom of peaceful assembly; and
(d) freedom of association."

15. (1) Every individual is equal before and under the law and has the right to the equal protection and equal benefit of the law without discrimination and, in particular, without discrimination based on race, national or ethnic origin, colour, religion, sex, age or mental or physical disability.
Affirmative action programs

(2) Subsection (1) does not preclude any law, program or activity that has as its object the amelioration of conditions of disadvantaged individuals or groups including those that are disadvantaged because of race, national or ethnic origin, colour, religion, sex, age or mental or physical disability.(84)"

Basically, as long as you can skirt around hate-speech legislation, you win. All the free-speech you like.

you slapped someone in the face.

Actually Albanians and Turks are white/causcasian.

However the nazis believe Albanians, Jews and Turks are non-white because of their religion. According to these fools, if youre non-Christian youre non-white!

Nazis are not only fucked up but also color blind!

Well, "white" doesn't mean anything... there are white-coloured Indians and Arabs (who are both technically "Caucasian" regardless of skin pigment). Not going to get into "subraces" of Caucasians and such because it's all crap. It's just plain ridiculous to organize any movement around such abstract and meaningless concepts as race or skin colour. But yeah... to most boneheads... Albanian = not white.

"However the nazis believe Albanians, Jews and Turks are non-white because of their religion. According to these fools, if youre non-Christian youre non-white!"

The NSDAP considered Christianity (Luthern) to be tolerated and excepted people of that faith within the Wehrmacht. The main teachings of NSDAP policy was that of Norse themes. Many religions were demonized between 1933-1945 including,Catholics,Free Masons,Jewish etc. The 13th Waffen SS Mountain Division "Handschar" had various ethnic people, including Muslim within its ranks.

Actually Albanians and Turks are white/causcasian.

However the nazis believe Albanians, Jews and Turks are non-white because of their religion. According to these fools, if youre non-Christian youre non-white!

Nazis are not only fucked up but also color blind!

Your talking about neo nazis.

um... they do realize Jesus wasn't white right? He was also jewish! man, are they ever smrt!!