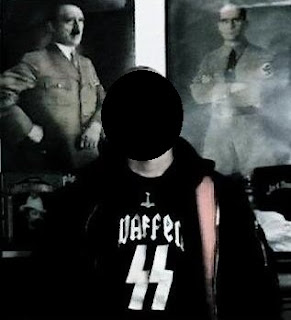 Boneheads have a bizarre attachment to Rudolph Hess, a Nazi-era politician whom even his contemporaries within the Nazi Party felt was lacking in terms of intellectual and political talents. Increasingly marginalized within the Party, Hess decided that he would prove his worth to Hitler by flying to the UK to hammer out a peace deal. He failed miserably and spent the remainder of the war in a British prison. At the end of World War II, Hess and other surviving Nazi leaders were put on trial for war crimes. During the trial Hess was noted for his strange behavior and mumbling testimony, so much so that even his co-defendants would make fun of him. He was eventually sentenced to life in prison; he ended his sad, pathetic existence in 1987 when he hung himself in Spandau Prison.

Hmmm, a failure and a loser. We think we know the attraction boneheads feel towards the late Herr Hess. He's like a mirror.

Well today boneheads are commemorating the death of Hess. So should we. As the boneheads have tried to co-opt March 21 (and, in our mind, mostly failed), we feel that this is as good a day as any to make our own (yes, we know that they also celebrate Hitler's birthday, but since most people celebrate 4/20 for very different reasons, we think that the boneheads have already lost that battle).

We then humbly suggest that we rename today, "Dead Nazi Day." Sure, it doesn't exactly roll off the tongue, but until another better suggestion is offered, we like this one.


Anti-Nazi Rally in Germany Ahead of Hess Death Anniversary

The small southern German town of Wunsiedel held a Festival of Democracy Saturday to register its opposition to neo-Nazis who have demonstrated in the town in years past to commemorate Nazi leader Rudolf Hess.


In nearby Warmensteinach, around 2,000 gathered for a more general protest against the far-right National Democratic Party (NPD) and to demonstrate against the sale of a local cafe to the NPD.
From 2001 to 2004, German right-wing extremists gathered in Wunsiedel to mark the day of Hess's death which falls on Aug. 17, until a court ban put a stop to the celebrations. Hess lies buried in the northern Bavarian town.
The Wunsiedel democracy festival was being held for the fourth year in a row to express support for the ban, which the right wing has tried to overturn.
Local police said NPD supporters had largely adhered to the court ban. Three carloads of party supporters had been stopped and told to turn around, a police spokesman said.
After World War II, Hess, who was Hitler's deputy until flying on a mysterious mission to Britain in 1941, received a life sentence at the Nuremberg Trials. He hanged himself at the age of 93 in Spandau prison in Berlin in1987.
And because it is so very, very appropriate:

Aww.. This Blog, Bonnie is just getting more and more childish.

Thanks. It helps keep us young.

But we're not Bonnie or Jason. Keep guessing, but you won't figure it out.