Anecdotal evidence suggests that despite Maxime Bernier's claim to reject the extremists who have been attracted to his new right-wing party, the PPC in fact has been courting those very same people. 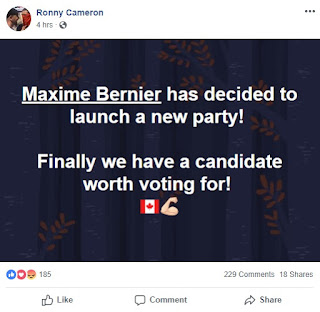 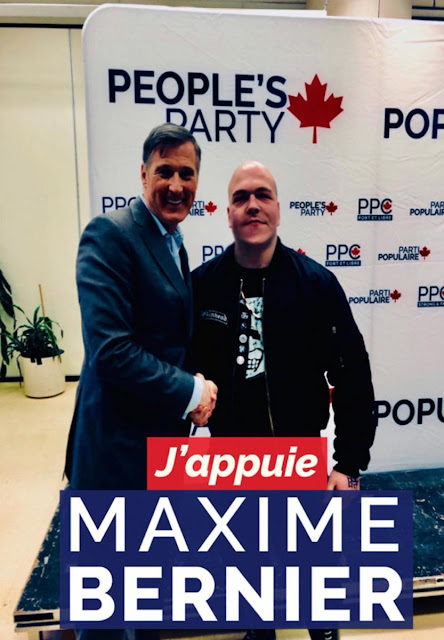 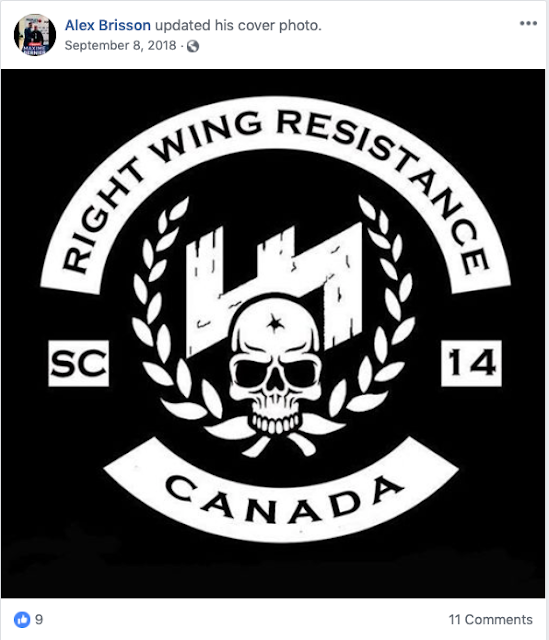 Certainly there are the dog whistles regarding multiculturalism, immigration, and identity politics that Bernier is happy to repeat online and on the stump. There is also some evidence that indicates that some PPC riding associations know that at least some of their supporters hold extremist views and that those members are simply asked to keep those views concealed: 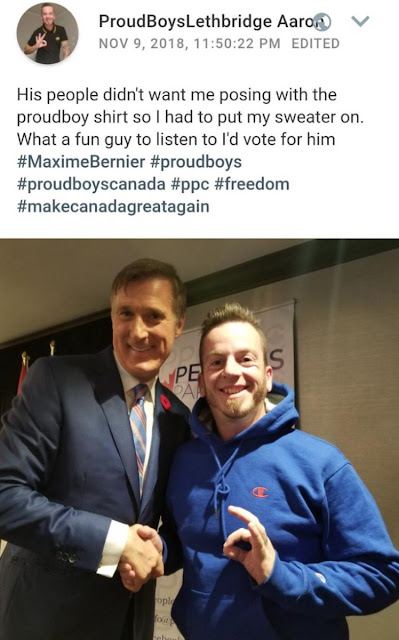 A recent article in the Canadian edition of the Huffington Post goes even further claiming that the PPC is actively courting votes from extremists groups including one mentioned frequently on this blog:

The Canadian Combat Coalition, also known as C3, is a self-described group of "patriots concerned with Canada's future." It has downplayed suggestions it endorses "any racist or hate ideologies," despite Islamophobic and anti-immigrant messages dominating its online community and having members who are known to show up at anti-Islam rallies.

"Let's take their votes, but no publicized cross endorsement of any kind," reads a message sent in February by national co-ordinator Caleb Voskamp in a Facebook group chat for PPC executives and organizers.

On the one hand courting the likes of the Canadian Combat Coalition seems rather futile given the actual membership consists mainly of a very small group of people (mainly in Ontario) who would have difficulty packing an elevator. My guess is that the CCC is simply representative of a number of extremists groups -- Proud Boys, Nouns of Odin, Northern Guard, etc -- whom the PPC may be actively trying to get support from, though even if this is the case the number of actual votes the PPC would receive from actual members, even if every member voted for a PPC candidate, would be minuscule.

More likely, the PPC is appealing to the people who, while not necessarily members of these groups, are active online as supporters. Those numbers, though still relatively small when compared to the rest of the potential electorate, are considerably larger than the core membership. These individuals are present on the social media sites of these hate groups and have become radicalized by the rhetoric of online extremism.

I present this individual as a potentially typical example of such a supporter, however I do so with a significant caveat that will become apparent later on in the article: 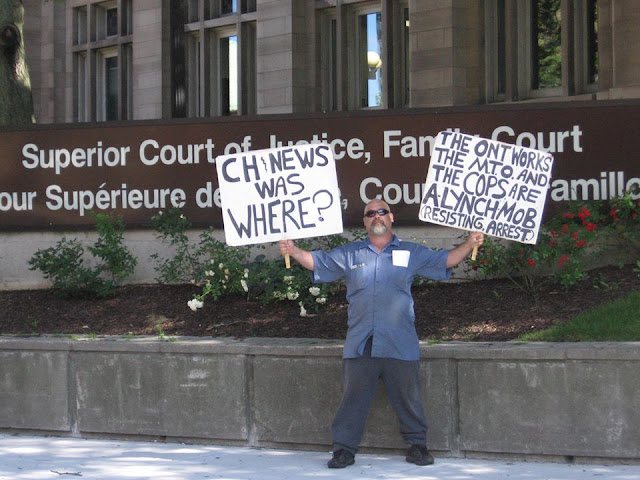 Tim Keizer is a character I started coming across this past autumn. He claims to lead a human rights organization that is promoted on a number of far-right Facebook groups (including a III% militia page) though he appears to be the only member and the "organization" appeared to be a bit of a vanity project to advance his own personal beefs with the court system:

Keizer is active in a number of groups that ARC monitors both commenting on posts made by others and posting his own content including but not limited to the groups below: 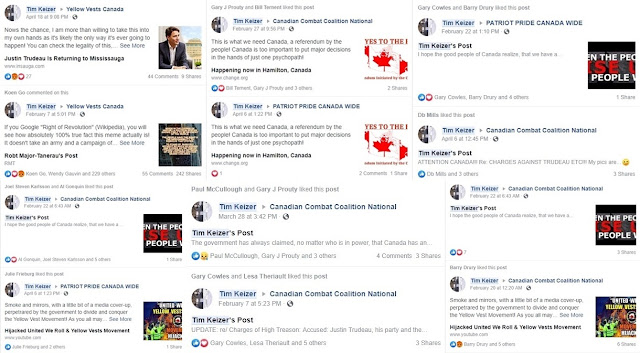 Since the Huffington Post article mentioned near the start of the article focused on the CCC, I figured that is where I would spend most of my time looking into Keizer:

Keizer commented on a number of posts including the usual anti-Muslim and anti-immigrant conspiracies that hate groups such as the CCC continually and uncritically promote: 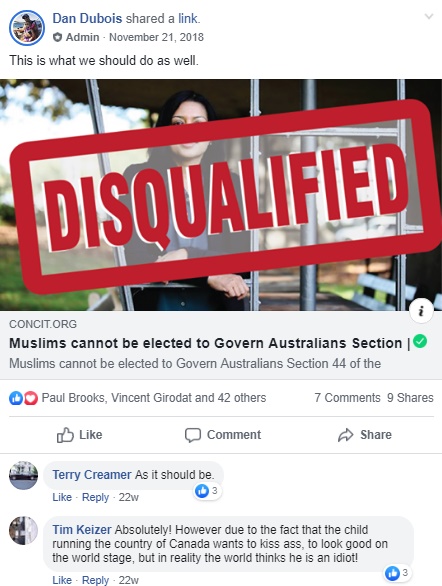 He is also a frequent poster of his own content which consists mostly of his claim the have a magic bullet to take down the government and convict Justin Trudeau for treason which has been part and parcel for members and supporters of the hate groups ARC monitors; others also appear to take his claims seriously and repost them as well: 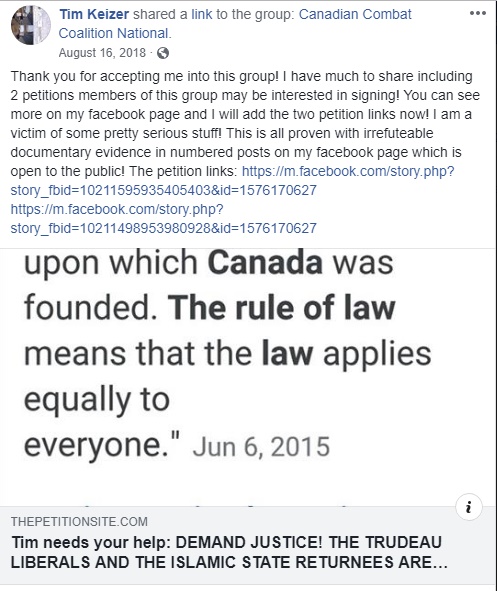 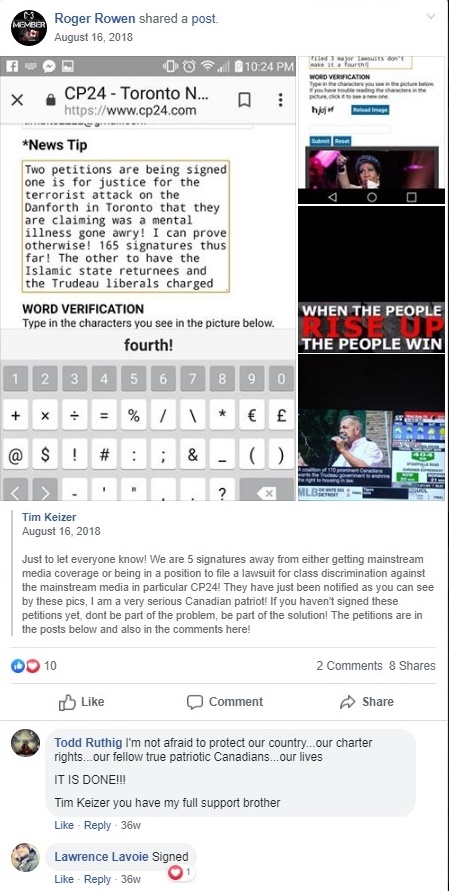 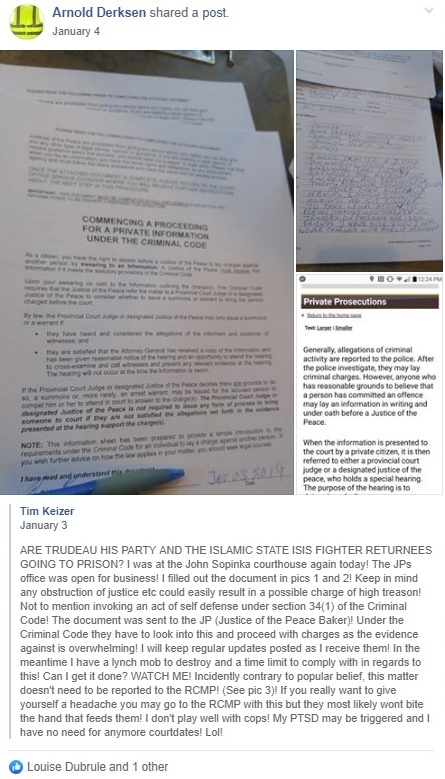 Readers may have noticed that Keizer appears to present himself as a legal expert and his admirers have certainly accepted this as gospel. In reality he really does present the same pseudo-legal mumbo jumbo that this blog and others have highlighted in recent years to claim the Liberal government is treasonous though it is evident these people simply use the word treason to describe legal policies they don't like.

In the case of Timothy Keizer though, this is of perhaps greater concern since he appears willing to se violence to achieve his goals as evident by posts on his own Facebook page: 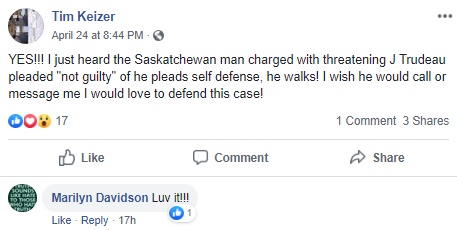 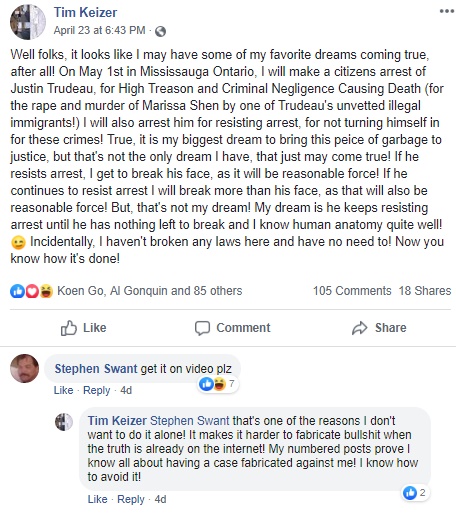 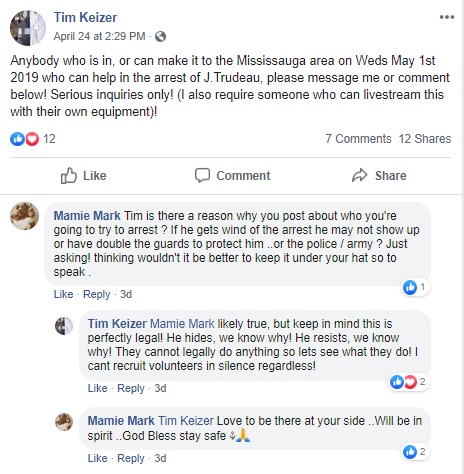 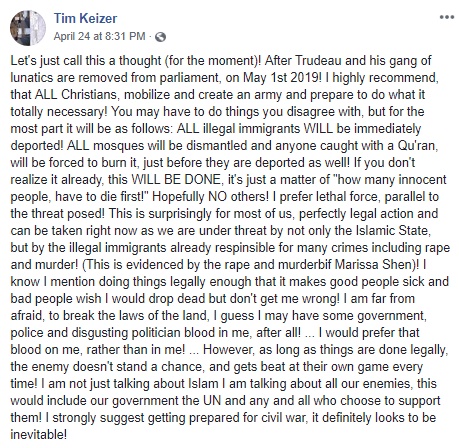 He also casually plans the genocide of Muslims: 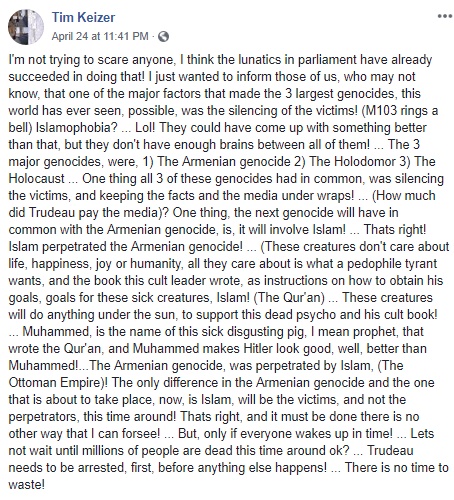 This is all rather disturbing and unhinged. It is also where that caveat comes in.

In the discussion regarding his plans to arrest Trudeau and his hope to be able to injure him, we get some insights into Keizer's mind: 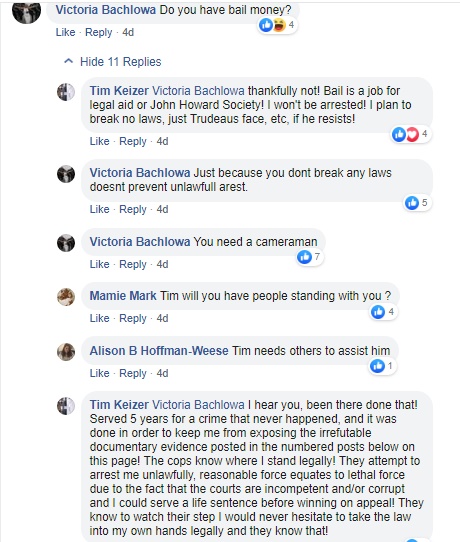 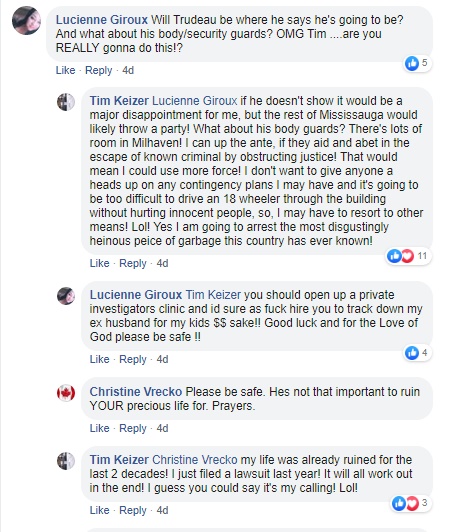 I decided to look into this individual more based on his claims regarding being imprisoned, tortured, and generally persecuted and found this: 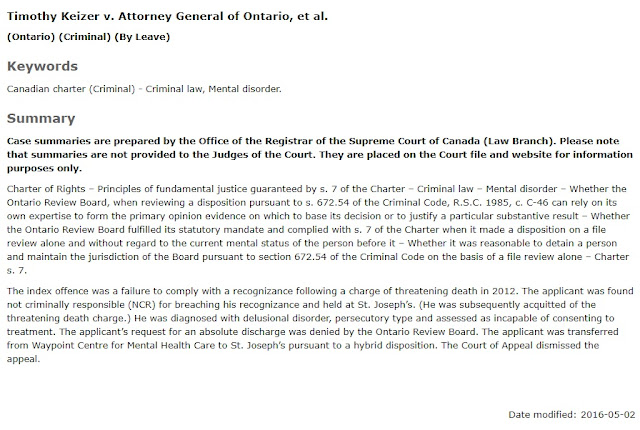 Tim Keizer is seriously ill and it appears that the delusional disorder (persecutory) is still untreated based on his other posts: 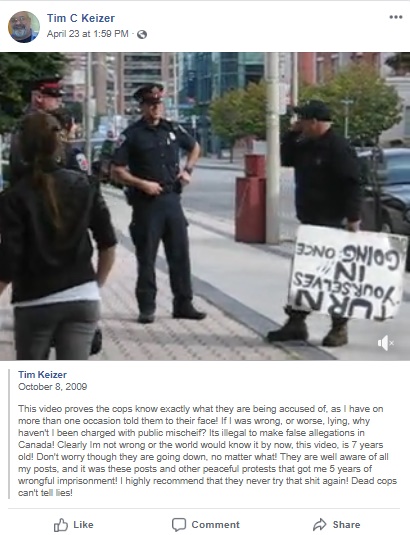 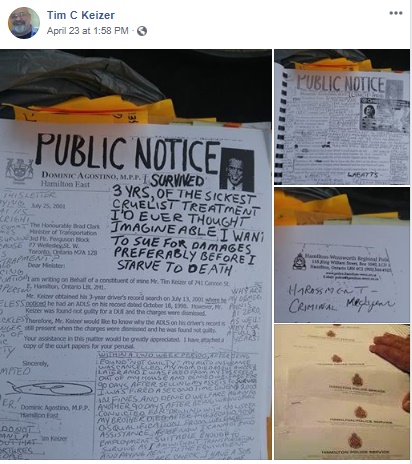 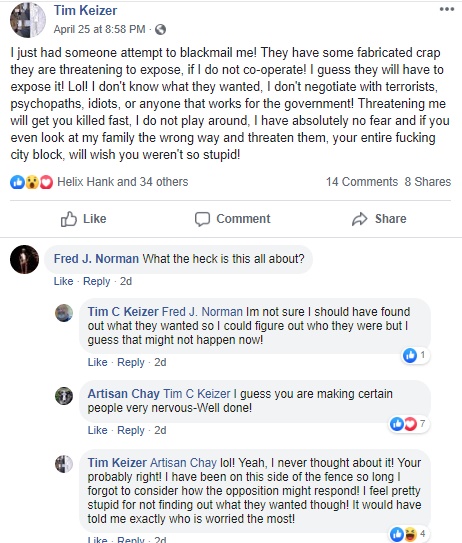 I've had a bad habit of casually throwing around the word "crazy" or variations. It is something I'm trying to stop but I don't doubt that I'll thoughtlessly do it again (and yes, feel free to call me on it). I'm highlighting this case for a few reasons:
Tim Keizer may never act out on his violent fantasies (and it should be noted that people suffering mental illness are far more likely to be the victims of violence than the perpetrators), but we have been witness to cases where horrible tragedies have occurred that are related to a psychotic episode. Sadly social media hasn't been especially helpful in this area as it seems to cater to those individuals by providing them with both the false news that confirms their paranoia and a community that shares that paranoia with them. Some politicians have done little to push back against the conspiracy theories that are causing unreasonable fear, suspicion, and hatred -- I think back to the passing of M103 and the fact a majority in the Conservative Party appeared comfortable helping to fostering a climate where a simple motion condemning Islamophobia has become an effort to enact Sharia Law and censor Canadians -- for reasons that could be related to political expediency (fear works) or cowardice.

As I look at the rhetoric online, I can't help wonder how many other Tim Keizers there are out there, who is using them for their own ends, and who might act out in violence because of the climate of paranoia that has been created?
Posted by Nosferatu200 at 18:41

Speaking of mental illness , have you checked in on Ryan Dean over at PPCW? LMAO what a glorious dumpster fire. He has alienated every single potential ally in Alberta and people are calling him out that it appears obvious he was a neglected child who acts to to get negative attention, rather than none at all.This is what fatherlessness looks like.