The discussion -- and by "discussion" I mean valid and harsh criticism -- of the Canadian media's treatment of white supremacist events, ideas and personalities has been heating up in the first few months of 2019. It is astonishing that in an era where we have access to more information on racist extremism than ever before we are experiencing such a deluge of ignorance and racist enabling from the mainstream press. In an effort to create a long-term record of the problem, and to call out those who think racism is either an unimportant or acceptable position, ARC is launching a new series to highlight some of the worst media blunders.

Let's get into the first quarter events and reports that make up the first entries on our Wall of Shame:

The renaming of the convoy from Yellow Vests to United We Roll was an effort on the part of the far-right organisers to keep the focus on their opposition to Bill C-48 (the Oil Tanker Moratorium Act) and Bill C-69 (an Act to bring the Impact Assessment Act and the Canadian Energy Regulator Act into effect). Many in the media, including reporters at The Calgary Herald, The Toronto Star, and the CBC's The National bought into the idea that UWR was simply a pro-pipeline movement and nothing more. ARC already covered this mess in depth here. Even a cursory look at Convoy members' social media shows it's filled with assassination fantasies, extremist members, and over-the-top racism. At the protest in Ottawa, where Andrew Scheer spoke, Yellow Vests Canada Exposed reported seeing members of C3, Northern Guard, and possibly Proud Boys on scene. Faith Goldy delivered a speech, and yet it was still just about pipelines to many in the media. As Nosferatu asked at the time:

If I, Yellow Vests Canada Exposed, and the Canadian Anti-Hate Network find this with our limited resources, then why won't the major media do more than a cursory and shallow examination of this racist movement?

Research for this piece brought up many more exasperating articles, however, this one from the North Bay Nugget goes above and beyond in the worst possible ways. It is mostly unchecked quotes from Convoy participants, including these anti-immigrant and Islamophobic gems from Pat King, who was seen mocking Indigenous protesters in Ottawa: 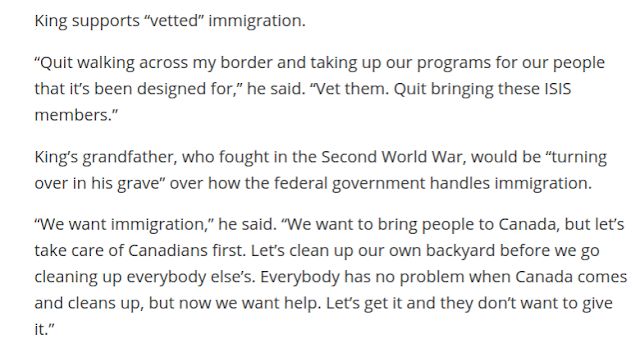 Then the writer uses Snopes in a feeble effort to counter antisemitism and global banking conspiracies, but ends up somehow legitimizing them instead:

The Convey is full of positive people and will make Canada great again: 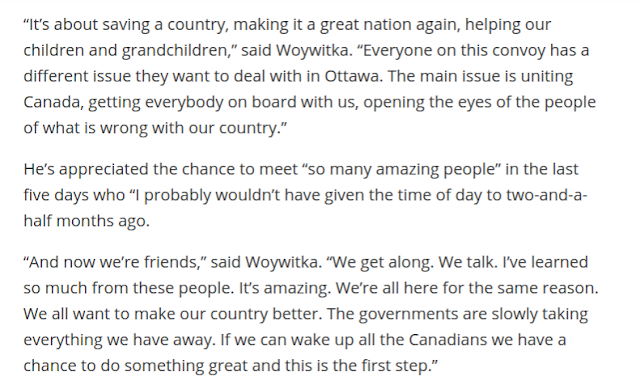 And finally, no hiding the anti-globalist, anti-migrant agenda in this piece:

Lest anyone think it unfair that I'm picking on a small-town journalist, consider this: newspapers like the North Bay Nugget set the tone and voice for their communities in more intimate and direct ways than the CBC national news. They both dictate and reflect back the views and beliefs of their readers in ways that can have immediate influence over tensions between residents. A newspaper of any size has a responsibility to its readership and community to report racist extremism accurately and show residents that racism is not welcome. Local papers, like Sault Online and Soo Today have done a good job reporting on Dave Selvers, so we know it can be done.

A couple of weeks ago, approximately 25-30 PEGIDA members and supporters were met by about 250 anti-racists in downtown Toronto. It was an impressive sight!

3:37pm. The police escort PEGIDA in the other direction, but are quickly cut off. Antifa + Allies have now flanked PEGIDA, with only police +bikes as a barrier. They stand still for some time. pic.twitter.com/s5pKYr4sJp
— du(ali)ty (@alijaveed_) March 23, 2019

PEGIDA's views are well-known and this protest should not have caused any confusion or sympathetic misrepresentation in the press. It really, really, really should not have, but it did anyway. First up is Sue-Ann Levy from The Toronto Sun with her piece "Anti-hate rally? Could have fooled me." She paints the anti-racists as hysterical, screaming, unwelcoming professional protesters who were provoked by Mayor John Tory to counter-protest. Meanwhile, the poor marginalized PEGIDA members were slandered and misunderstood:

While many in Toronto are, unfortunately, used to Sue-Ann Levy's...er...perspective on things, it was nonetheless surprising that after intense criticism from this piece she would double down and accuse certain municipal politicians of being "anti-white supremacy," as if that was a bad thing:

It was perhaps only a matter of time before a Sun columnist complained about politicians being "anti-white supremacy." https://t.co/OYLEc6EoSc pic.twitter.com/3j8UKf6HoR
— Jonathan Goldsbie (@goldsbie) April 1, 2019

It's sad and frustrating that The Toronto Sun is supporting a white supremacist sympathizer when, despite all its problems in the past, it used to support Bill Dunphy who was determined and unrelenting in exposing The Heritage Front and Grant Bristow in the '90s. It feels like this publication is following  dangerously close to Rebel Media's path into the arms of the so-called alt-right.

A dishonourable mention for poor PEGIDA coverage goes to CityTV's Pam Seatle who put her own unpleasant experience of the event as the lead and then posted this Tweet, which was later deleted (source, Twitter user @Liam_Tosh): 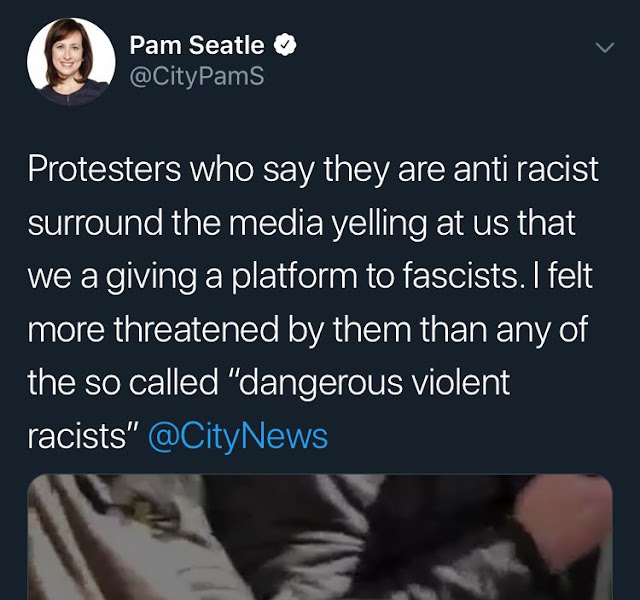 It took a week, but CityTV finally apologized, stating this coverage did not live up to their editorial standards and they are committed to doing better. Time will tell if this is indeed the case.

Last but certainly not least on this quarter's list is Danielle Smith's dumpster fire of an interview with former UCP candidate, Caylan Ford. She resigned after PressProgress published verified screenshots from a Facebook Messenger conversation where she expressed classic white supremacist views about population replacement and special treatment for Islamic terrorists:

She opted to step down, supposedly for the good of the party, and then shared her story on Smith's radio show. Danielle Smith herself has deep roots in Alberta politics and was the Leader of the Wild Rose Party from 2009-2014 and Leader of the Official Opposition from 2012-2014. I can't help but wonder if, beyond her own probable racism, seeing a young female candidate ruined by leaked private messages created a sympathetic blind-spot for Smith that greatly impacted her ability to do her job as a radio host.

When seeking out this interview, I was expecting a 5-10 minute piece and was surprised to find that  Smith devotes nearly 40 minutes to Ford! She frames Ford as a good person who has been stalked and defamed by the UCP member who leaked the messages and then gives her nearly a third of the air time to go into great detail about this supposed victimization. While ARC certainly does not excuse or condone the behaviour Ford claims she was subjected to, it also should not be used to deflect and re-frame her exceptionally problematic statements.

It was completely irresponsible that at no point during their 40-minute interview did Smith directly challenge Ford's racism and white supremacist sympathies. On the contrary, they agreed about the "demographic problem" Canada supposedly faces, and Smith allowed Ford's explanation as someone who has studied Mandarin and practices "Chinese Buddhism" as proof that she cannot possibly be racist. If she honestly thinks Buddhists can't be racist by default, we'd be happy to introduce her to the works of Brian Ruhe, which should change her mind in a hurry.

The interview continues in this fashion until, near the end, they both cry together as Ford recounts the numerous letters of support she's received from people in her riding of Calgary Mountainview. At the end she states that critics of her interview were warned that it would be controversial and that they were welcome to not listen. Calling on critics not to listen, and thereby blaming them for their objections, in no way excuses her from giving a racist an opportunity to gain sympathy, redeem herself, and tell "her side" unopposed. Enabling white supremacy is still a problem regardless of who listens.

While there is no excuse for lazy journalism, or worse, for allowing personal prejudices to get in the way of responsible reporting, I want to recognize the role newsroom downsizing plays in the general mess we are seeing this year. When good journalists are let go to boost profits, or saddled with such a heavy workload that they cut corners, we need to call out the corporations that are responsible for these changes. Reporters need the resources and support to do their job properly or we all suffer the consequences. As consumers of the media, it is up to us to demand quality over quantity and responsible reporting over reactionary clickbait. I wish this was the only cause of our media problems, because time and money would be far easier to solve than their ever-increasing flirtations with white supremacy. No doubt I will be back in three months with another instalment.

Goebbels would be proud

They should have been exposing Scheer all this time instead of trying to paint Trudeau as the second coming of John Macdonald.

Lindsay Shepherd wrote about Caylan Ford in the Postmillenial, carefully cherrypicking from Ford's first tweet above, and ignoring the other tweets by Ford about white replacement, etc.
https://www.thepostmillennial.com/shepherd-progressives-used-the-new-zealand-tragedy-for-a-political-hit-job-on-a-ucp-candidate/