WCAI Planning On (and Looking Forward To) Engaging in Violence Saturday

As August 11, the day of the planned Worldwide Coalition Against Islam event in Toronto, approaches, Ward 27 Councillor Kristyn Wong-Tam issued the following statement regarding the hate rally on Twitter:

My statement on the Anti-Islam Event at @npstoronto on Aug 11. No permit has been issued for this hateful rally and none will be. Nazis and bigots have no place in Toronto and Canada.

There is a counter-protest being organized by United Steelworkers Toronto Area Council and other supporters. Please come out and help send a peaceful message of resistance to these racists. There is no place in Toronto for  hate and violence. https://t.co/YZ67c0eikp
— Kristyn Wong-Tam (@kristynwongtam) August 7, 2018

Now regardless of whether or not they've been issued a permit, it seems that the city isn't going to try to stop them despite obviously running afoul of the City of Toronto's Hate Activity Policy:

But in a response late Wednesday afternoon from Omo Akintan, Acting Director of Equity, Diversity and Human Rights for Toronto, B’nai Brith was told the rally will go on as planned.

“The City of Toronto is aware of the planned protest… in Nathan Phillips Square by the Worldwide Coalition Against Islam (WCAI) and shares B'nai Brith's concerns,” Akintan wrote.

“The City has a Hate Activity Policy with which users of public spaces are expected to comply. The policy prohibits use of City facilities and spaces for hate activity as defined in the Policy. We will continue to enforce the policy. The City will not tolerate, ignore, or condone illegal discrimination or harassment including any rally that incites hatred and/or violence against groups or persons.

“To that end, the City has already taken actions to address this matter which includes the preparation of an event plan with the Toronto Police Service that has the life safety of everyone as the primary concern.

This is further explained in a "Canadian Jewish News" article posted today:

There were some rumblings online that organizers were not granted a permit for the rally, but permits are not issued for rallies or protests at Nathan Phillips Square, according to City of Toronto spokesperson Jaclyn Carlisle.

That frustrates Toronto Ward 10 Councillor James Pasternak, who’s been after the city for months to develop a policy on hate groups that use municipal property.

“This is a big problem and this is what we’re trying to get our city staff to act on,” he told The CJN.

“These kinds of gatherings are an affront to everybody. They’re repugnant. They’re not in keeping with our anti-discrimination policy,” Pasternak said.

He said permits are required if a gathering has a sound system and seating. Saturday’s protest doesn’t appear to require those, if past protests are an indication.

Toronto “needs a strong policy to put an end to this kind of hate rally.”

So, "the City will not tolerate, ignore, or condone illegal discrimination or harassment including any rally that incites hatred and/or violence against groups and persons."

Soooo, would this post from the WCAI Toronto event page be proof of enough that they plan on committing acts of violence?

And this one from back in July? 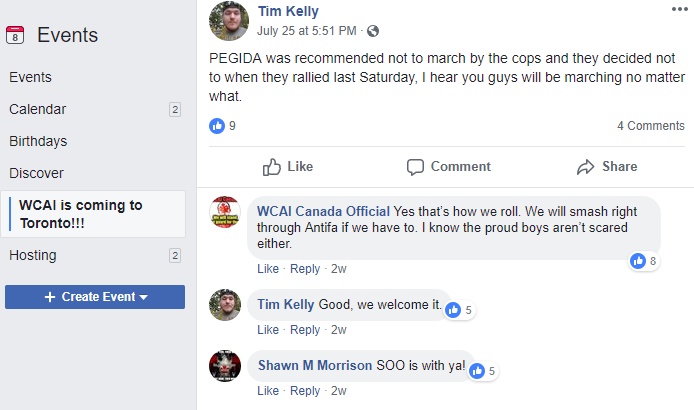 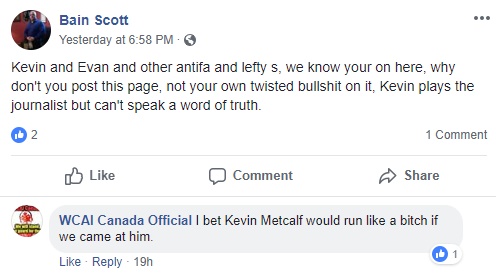 Could this be proof that Joey Deluca, his WCAI, and their supporters intend to incite, "hatred and/or violence against groups and persons": 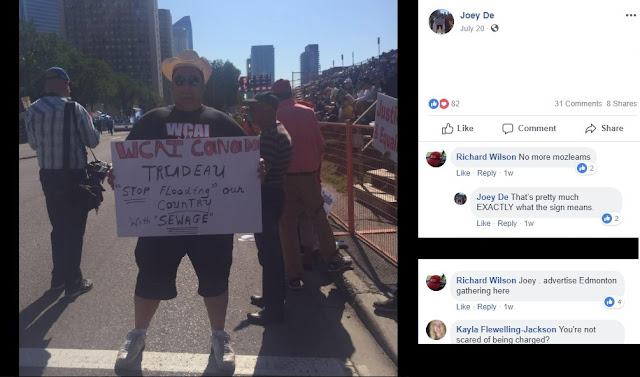 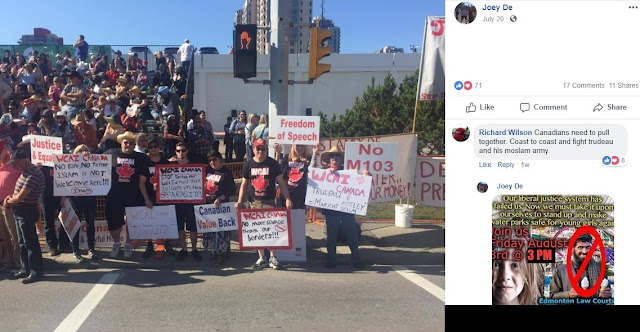 Really though, none of this is especially new. ARC has exposed the WCAI and their supporters as racists, antisemites, Islamophobes, and homophobic time and time again.

That said, the WCAI is running into some problems fundraising for their event: 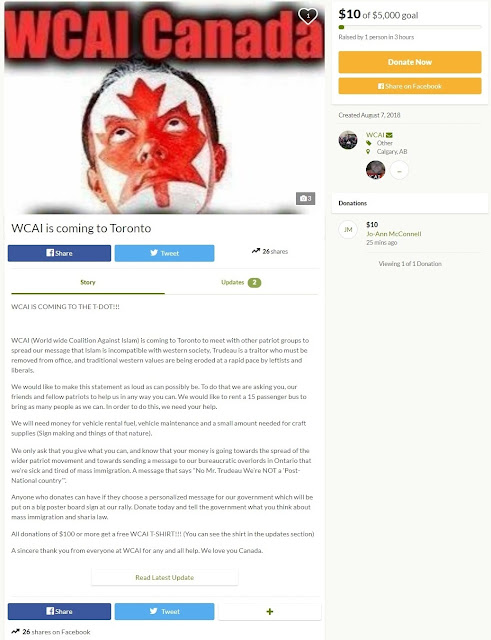 This Go Fund Me page was soon removed by the folks who run the crowd sourcing site, as was the second one that the WCAI created. Given the amount they likely got during their most recent fundraiser, it should be enough to get them to Moose Jaw: 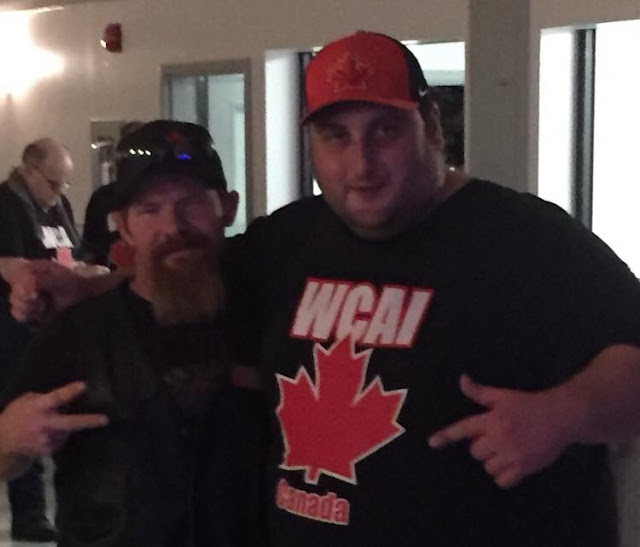 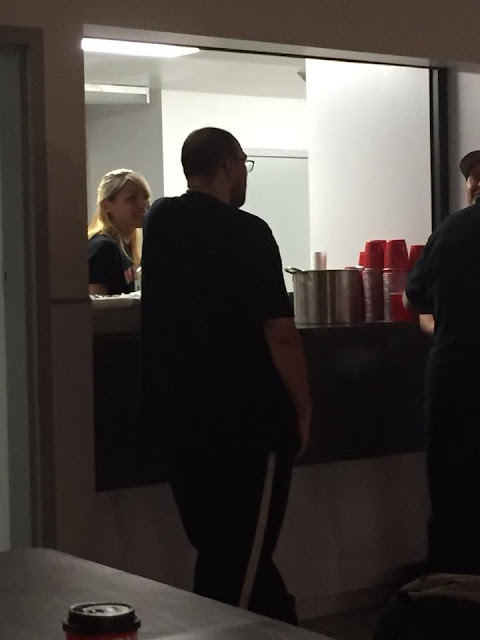 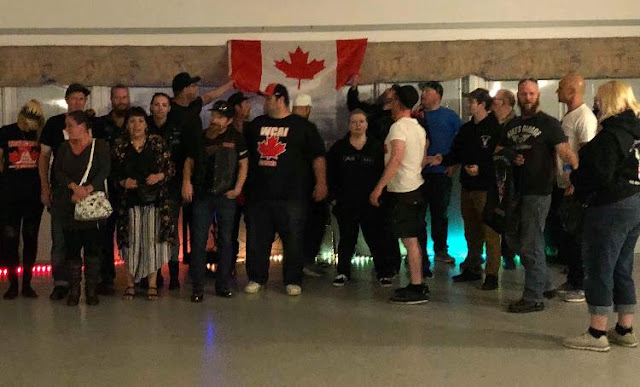 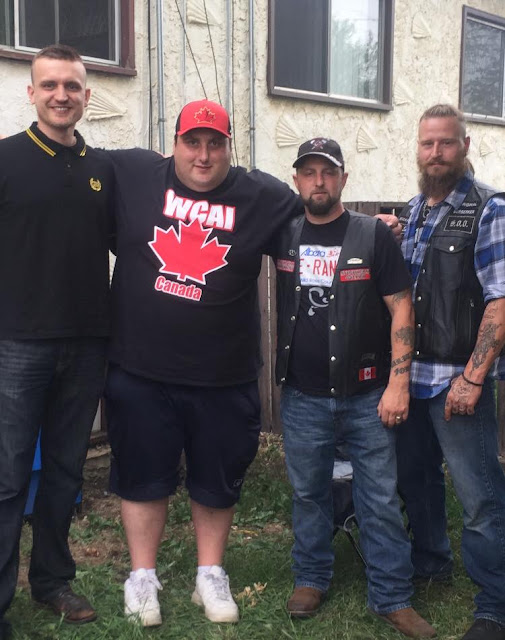 Now Joey and company might have already saved their nickles and have enough to pay for the trip to Toronto, but they certainly aren't doing well recouping those expenses if they have.
Posted by Nosferatu200 at 23:38

That last picture is so funny, Jeremy dwarfed by all the others. Get that man a stool to stand on!