The fallout from Le Troupeau's expose of Diane Blain and her association with the Storm Alliance and Front Patriotique du Québec continues to reverberate in Canadian political news. To recap, Blain and other members of a the far right Front Patriotique du Québec managed to get into a Liberal Party event. Ms. Blain started shouting questions at Justin Trudeau that became increasingly racially exclusive and he called her out for it. Initially Trudeau was criticized for how he handled Blain since the video only caught the latter part of the exchange and provided little context, however Le Troupeau was able to prove the whole thing was a set-up intended to cause a reaction resulting in a decidedly different understanding of the event.

So I did a video that shows some of the points that were left out of the coverage on the story of Justin Trudeau's heckler.
To see the transcript of the original video by Carl Brochu member of Front Patriotique du Québec:https://t.co/jESF83SwUJhttps://t.co/gETsCusiFK
— Le Troupeau (@LetroupeauQC) August 22, 2018

The second man asked a question about the statue of John A. MacDonald and the Jinnah Park. He then says he was saying to people that they were lobotomized and that the Liberal party belong in the trash, and he was surprise that nobody wanted to hit him.
— Le Troupeau (@LetroupeauQC) August 22, 2018

UPDATE ON THE HECKLER INCIDENT

In a video (I'll post it below) the cameraman Carl Brochu explains how they got into the Liberal event, fooling the security because their strategy was to get in, one by one. He explains that there were 10-15 patriots there to disrupt the event. pic.twitter.com/3XzoyT2Ic4
— Le Troupeau (@LetroupeauQC) August 22, 2018

This raise a question. Did newsroom paid any money to get the footage from that man knowing now that he participated and had an active role in the "making" of this incident? Because this money is going to a group of people who are actively spreading false news on their channels
— Le Troupeau (@LetroupeauQC) August 22, 2018

He says: "It was an event for the members of the Liberal party"
"At the entry point they where checking people. Our strategy was to get in one by one, not to attract any attention"
"They were all Liberals except 10 to 15 "patriotes" who join forces in order to disrupt the event"
— Le Troupeau (@LetroupeauQC) August 22, 2018

Here is the video, I will try to put the subtitles soonhttps://t.co/Hu4xMSOyoD
— Le Troupeau (@LetroupeauQC) August 22, 2018


The mainstream Conservative talking points had initially been to attack Trudeau for calling a nice, little, old lady a racist and not addressing a legitimate question. After Blain was exposed, the talking points changed.... slightly. They acknowledged that she was a racist, but the question was still legitimate and Trudeau had no right to call her a racist for asking the question.... even though she was a racist.

This is a position taken by no less than the leader of the Official Opposition:

By sweeping away legitimate questions on his failed border policy with vile personal insults, it is Trudeau himself who is guilty of polarizing the debate. No one has done more to divide Canadians than he has. 1/5
— Andrew Scheer (@AndrewScheer) August 20, 2018


The problem with this, as noted earlier, is that the video only caught the part where Trudeau called out Blain for being a racist. It didn't include the initial confrontation when Trudeau attempted to address her question (while a companion of her's belittled the statement concerning Mohawk territory) and only called her out when she began using offensively racist language:

h/t to the Huffington Post for transcribing the exchangehttps://t.co/Rld3EnwklW
— Bashir Mohamed (@BashirMohamed) August 21, 2018

And it is of course important to understand why the language Blain used was offensive:

It is essential that, as this exchange gets recounted in Anglophone media, it gets translated correctly.  The woman used an extremely racist term that excludes everyone whose family does not date back to *1759 or earlier* from ever being accepted as Quebecois. #cdnpoli https://t.co/ug93ACQOVJ
— Heather Hughson (@HNHughson) August 21, 2018

You don't have to speak French to see where they draw their inspiration from, given how often Trump is mentioned in this article, but they go further: "In the United States, it's the white man [who is threatened]. In Québec, it is the Québecois de souche."https://t.co/677KqL9npI
— Heather Hughson (@HNHughson) August 21, 2018

"A stump [souche], is a tree that's no longer a tree.  It's a piece of the trunk with only the roots remaining. It's a piece of a trunk on which there will no longer be any leaves, any flowers, any fruits. A stump is a dead tree." #cdnpolihttps://t.co/LUACekcbnM
— Heather Hughson (@HNHughson) August 21, 2018

I am reminded of what Pierre Elliott Trudeau said before the 1980 Referendum after Rene Levesque mocked his middle name for being too Anglophone. The logic of "Quebecois de souche" rejects anyone whose bloodline isn't pure New France going back to 1759:https://t.co/hydjcTBO9w pic.twitter.com/wUOcpCesD0
— Heather Hughson (@HNHughson) August 21, 2018

Let me reiterate: the term "québecois de souche", as used by that woman, is so exclusionary that Pierre Elliott Trudeau, the most Quebecois of Canadian giants, does not count as québecois de souche. And neither does his son, Justin.
— Heather Hughson (@HNHughson) August 22, 2018

It's similar, in that both idioms reference purity, but souche evokes chopping off all the growth that came after 1759, because is sees that growth as diseased and tainted.  It's one of those terms that loses a certain amount of its venom when it's translated into English.
— Heather Hughson (@HNHughson) August 21, 2018

I think that Anglo media are doing a disservice by attempting to translate the idiom into one that's still racist but not as profoundly so, rather than use the term "souche" and educate English-speakers about its etymology.
— Heather Hughson (@HNHughson) August 21, 2018

Perhaps it shouldn't be surprised that Andrew Scheer, a man who has proven himself to be a feckless, milquetoast, coward who can't stand up to Bernier for his overt bigotry but then accuse Trudeau of being divisive for calling out a racist since too many of the people who side with both Blain and Bernier represent a sizable base of the Conservative Party right now. I mean, this IS the party that spoke of "Old Stock" Canadians, barbaric practices hotlines, and Canadian values purity tests. 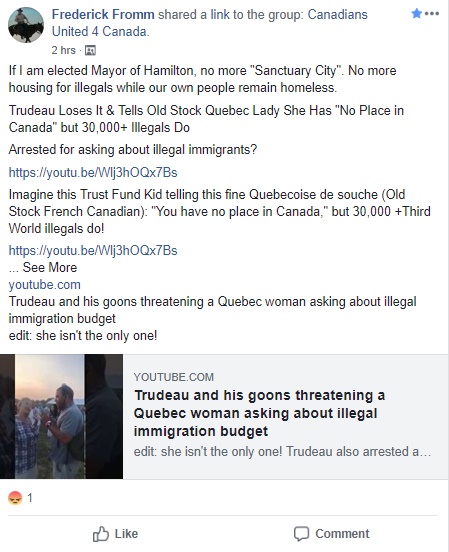 If Paul Fromm agrees with you, you are definitely on the wrong side of history.
Posted by Nosferatu200 at 15:11

Excellent post. It’s important that English-speaking Canadians understand what really happened that day when Blain and her scummy friends disrupted that Liberal event. Especially since the Cons have made it clear that they intend to make racism the centrepiece of the next election campaign. Keep up the good work.

"Finally we have a candidate worth voting for!"

I had no idea Ronny lives in Beauce.

When a Conservative MP is sharing links from alt right websites claiming that Muslims are trying to legalize pedophelia (even though the video in the link said no such thing), it's time to rename the conservative party to something more fitting... http://pressprogress.ca/conservative-mp-promotes-fake-news-article-claiming-muslims-want-to-legalize-pedophilia/