At least we think we're on to Part VII. Really, after a few years one does lose track.

In any case, a few years back a number of bloggers and others accused Richard Warman of posting incredibly racist comments about Caribbean-Canadian senator Anne Cools. It seems the accusation may have originated as a result of Warman's Se. 13 case against Marc Lemire. It was suggested that Warman had posted the statements on Lemire's Freedom-Site based on what was then alleged to have been an ip address Lemire and Klatt had linked to Warman. Warman denied this and there was absolutely no evidence to support the claim, but conservative Internet personalities like Kathy Shaidle and her husband Arnie, Kate McMillan of "Small Dead Animals", the good folks at Free Dominion, Ezra Levant, and a few others ran with the claim.

Mr. Warman insisted that they remove the defamatory claims from their respective websites. They doubled down. He sued.

At first they were all pretty confident that they would be able to prove that Warman had written the incredibly vile comments in question. They were especially smug when Levant was able to convince the courts to have Warman's hard drive subjected to a forensic examination: 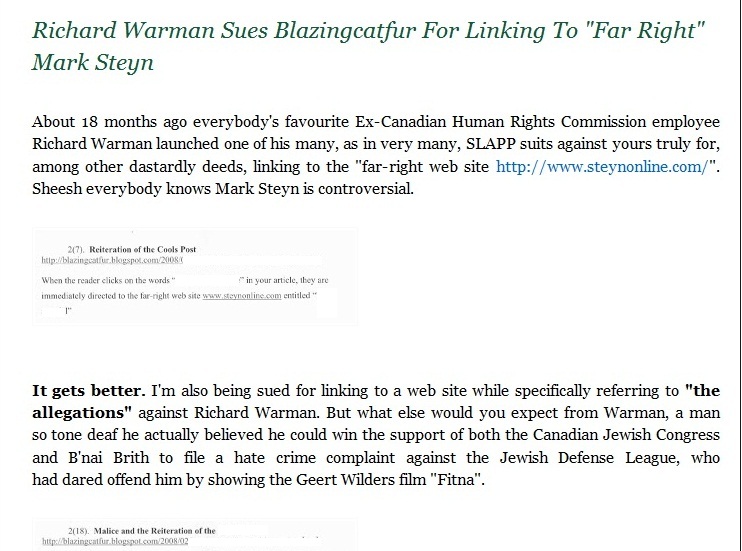 Long story short, the forensic examination found absolutely nothing that would link Warman to the racist comments made about Ms. Cools. The other "evidence" also turned out to be a heaping load of nothing as "Bouquets of Gray" pointed out:

The first shoe to drop was Arnie of "BlazingCatFur" back in January 2013. Today, Kate "Small Dead Animals" McMillan and Kathy "Five Feet of Fury"Shaidle joined Arnie in apologizing to Warman for the unfounded and defamatory allegations made against him: 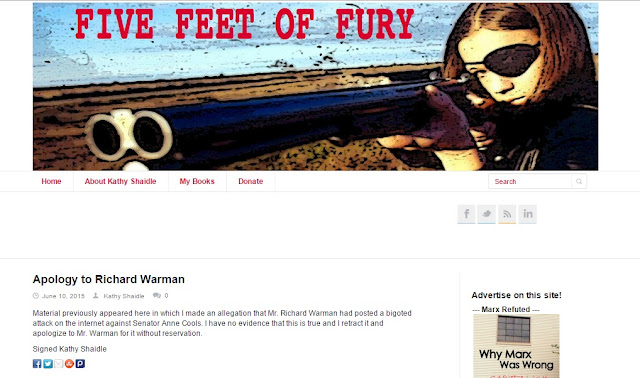 So, if we are correct that leaves Ezra Levant and the proprietors of Free Dominion left.

Anyone want to bet who is next to settle and apologize?

The only remaining defendants in the ‘Anne Cools’ libel action are Mark and Connie Fournier. I have instructed my lawyer to make a without prejudice offer to settle for $1 and $2,500 in costs each which I will then donate to the trust fund that has been established for the family of Daniel Woodall of the Edmonton Police Service.

I am enormously indebted to my ever-capable lawyers Brian Shiller in Toronto and Jeff Saikaley in Ottawa. There’s one song for each below.

Mr. Warman made a similar gesture when he won a judgement against the Fourniers and the remaining "John Does" but it was refused. We'll see if better judgement prevails in this case.
Posted by Nosferatu200 at 21:11

But if the Fourniers settled with Warman they'd lose the prod they use to raise money from their flock.