"Cobbsville Redux" or "The Sequel is Usually Worse Than the Original"

Insanity: 1. the condition of being insane; a derangement of the mind. Synonyms: dementia, lunacy, madness, craziness, mania, aberration.

2. (Law) such unsoundness of mind as frees one from legal responsibility, as for committing a crime, or as signals one's lack of legal capacity, as for entering into a contractual agreement.

4. doing the same thing over and over again and expecting different results.

Our readers will no doubt vividly recall Craig Cobb's efforts to take over a small, North Dakota hamlet in order to turn it into a White Nationalist enclave. Our readers will further remember the giddy excitement from some boneheads (such as our own Tomasz Winnicki) and the ridicule of the effort by other boneheads. Finally, our readers will remember the absolute disaster of Cobb's attempt to take over the town which ultimately culminated in his arrest and later guilty plea to keep himself out of prison.

When the debacle had passed and he had been released from jail, Cobb suggested that he was done and was going to retire from the movement, at least as a public activist. Considering his desperate need for attention, we never believed him for a moment.

Guess what Craig Cobb is planning to do again?

A group of white supremacists is once again eyeing a small North Dakota town as the potential location for a community of their own.

In an email sent to the Herald, Craig Cobb, who attempted to turn Leith, N.D., into an all-white enclave, included a number of links regarding plans for the small town of Antler, N.D., located in Bottineau County two miles from the Canadian border.

It's called Antler, ND PLE, the acronym standing for Pioneer Little Europe, a white nationalist movement which encourages its followers to relocate to remote locations and form communities.

Cobb says he hopes to crowdsource the project, raising about $70,000 to purchase property in the first of likely multiple campaigns.
....
Cobb first garnered national attention in 2013 when he purchased 12 lots in the town of Leith with the intent to turn it into white nationalist community.

The town of less than 20 residents gained national attention as community leaders and residents attempted to push Cobb and his allies out of the town. The small community played host to protests against Cobb's plans.

He eventually left Leith after being convicted of felony terrorizing and menacing residents when he led an armed patrol through the town in November 2013. He deeded his property back to the city a short time later.

Now, his attention has turned to Antler, a town founded in 1905. The town is located 17 miles east of Sherwood, N.D.—Cobb's current town of residence.

Cobb said he has been negotiating with a seller for a couple of months and noted there are 28 lots and three homes for sale in the city. The town's proximity to Canada is something Cobb said he hopes convinces Canadians to settle in the potential community.
....
At first, a Facebook page called "Antler, ND" seems to be a page for the small town, but the tagline "We will have our PLE in North Dakota. UnityND will not be stopping us!" is the first hint it represents something different.
....
The page encourages those looking for looking for freedom speech, GMO-free food and the company of likeminded people to consider buying property in the town.

"This new PLE effort, it's not about hate. It was never about hate, but we want to make it clear it's not about hate..." the page says in a June 8 post. "I just want to be in a town with my people, and only my people. Is that too much to ask?"
....
The Antler, ND PLE page is less than a week old and has 46 likes. Other posts include an invite to an officer currently under fire in McKinney, Texas, for pushing a 15-year-old black girl to the ground and links to new stories of crimes with white victims.
....
The Antler, ND page administrator did mention the failed Leith venture in a June 8 post.

"We 'rayciss bigots' want to live with each other, we don't want to bother anyone," they wrote. "That's what we wanted to do in Leith, and there was no problem until you guys came along. Hell Cobb lived there for a year without incident, so you can't blame him."

Cobb told the Herald he doesn't intend on moving to Antler unless the city changes its law to allow horses within city limits.

Cobb himself has started to promote his latest quixotic campaign on Stormfront where he seems to have set up shop.... until he inevitably antagonizes his hosts there as he has on every other forum he has been a member of (more on that later):

Thus far the response has been mixed. He certainly has his supporters still.... 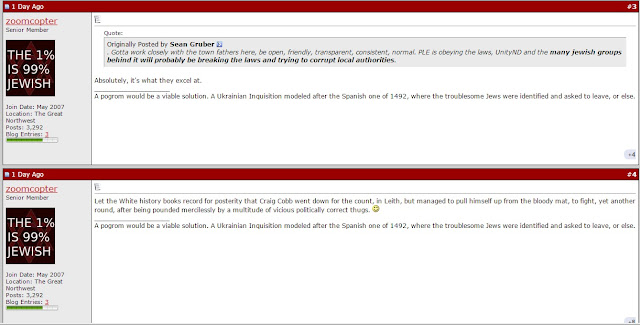 .... but others are a bit more skeptical:

But neither the naysayers nor Cobb's own past history of epic failures will dissuade one of Cobb's remaining true believers:

Right. Come on Tommy? Who are you fool'n? You're not about to leave the comfort of your mother's basement to live independently in a tiny North Dakota hamlet! Don't pretend otherwise. Besides, you wouldn't make it through a winter before begging mommy for bus money.

(It should be noted this writer knows what she is talking about as I actually grew up in Melita, Manitoba, only a short drive from Antler, North Dakota.... the winters are tough and we don't think Winnicki is man enough to last a single season).

But the talk is on par with what Winnicki has been writing about for some time. He not only wants racial segregation, but ideological segregation as well: 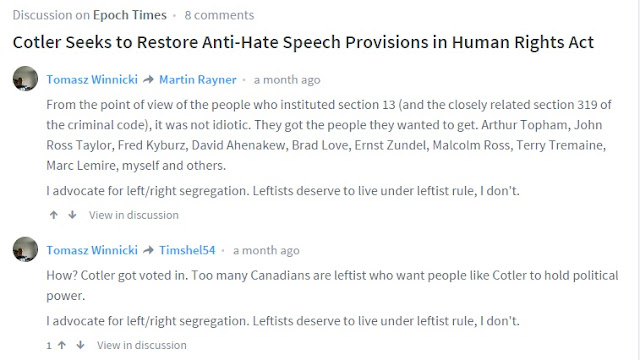 But as we've noted before, Winnicki's utopian vision doesn't pass muster when confronted by the reality of the movement he is associated with.

Back when Cobb was trying to take over Leith, North Dakota, he had no bigger supporter than Stanley Edward Diggs. Diggs, a convicted sex offender and self-proclaimed millionaire was a long time member of VNN who was unceremoniously dumped on his ass by Alex Linder. Cobb, also a long time member of VNN, was banned too when he defended Diggs and made the same accusations Diggs had earlier, claiming that VNN was riddled with agent provocateurs and spies. Cobb followed Diggs to a forum created by Diggs, White Nations. During the Leith disaster, Diggs was a consistent cheerleader for Cobbs as threatened to use his vast fortune to destroy the people of Leith for their persecution of Cobb. While Cobb was in jail awaiting his trial, Digg remained a staunch supporter, even driving to Leith with another bonehead to salvage what they could of Cobb's personal affect.

So, we're sure by this point our readers will know where this is all leading to:

Because these people are not only racists, but misanthropes who when push comes to shove can't stand each other, there has been a falling out between Diggs and Cobb. We begin on the White Nations forum where the members begin to discuss allegations Cobb made against Diggs:

What does Cobb allege? We now turn to the aforementioned thread on Stormfront: 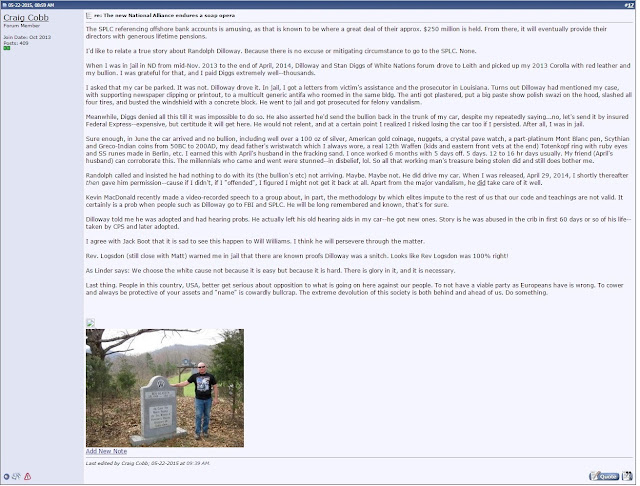 Back on White Nations, Stanley Diggs responds to Cobb's claims with the quiet dignity we've come to expect from the man:

This is the movement that Winnicki thinks will result in a new civilization.

Good luck with that Tommy.