How Is Paulie's Campaign Going? Also, A Contest With Real Cash Prize

In one month, Paulie will go down in flames (again) after another election. Then again, winning the election isn't really why Paulie is running: 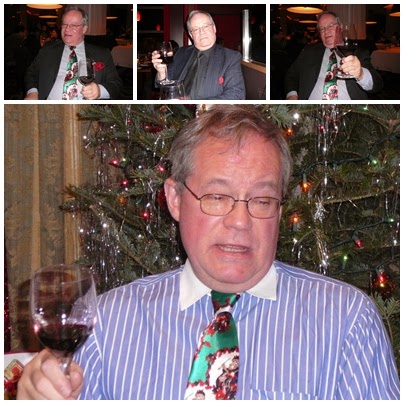 Yes, yes, we are indeed a cynical lot. But if Paulie can be considered to be good at anything, it is shamelessly promoting himself to his suckers.... er.... I mean donors. 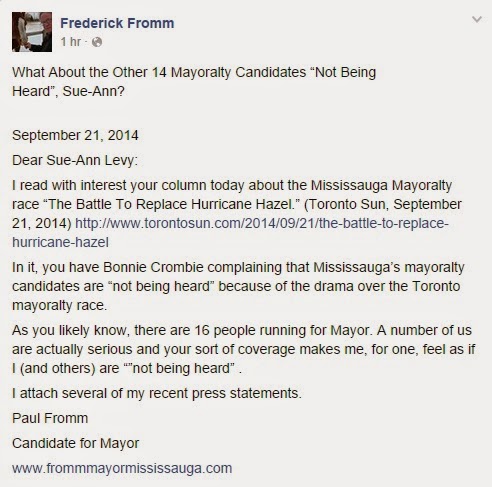 A recent publicity stunt certainly suggests the only thing he is serious about is convincing those who still follow him (and it seems to be a shrinking number here in Canada) that he stands an actual chance of winning and thus needs their financial backing. Here he is with the Canadian leader of the violent creativity movement Wes Smith: 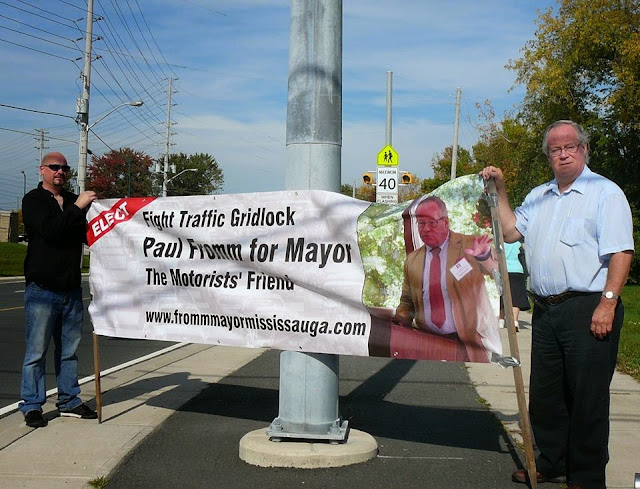 This was a busy weekend on the campaign trail with extensive literature distribution in many parts of Mississauga. Here we unveil my sharp election banner to inform motorists coming of the QEW gridlock into Port Credit that Paul Fromm is "the motorists' friend."

Hold on there sparky. Mayor of Mississauga? Might be getting a bit ahead of yourself.

I can't help observe two things. First, the traffic. Where is it? Really, it doesn't seem to be so bad.

But assuming traffic is as bad as Paulie claims it to be, we aren't sure someone touting himself as, "the motorist's friend" should be displaying a banner that would inevitably distract said motorists and perhaps result in an accident.

But really, we all knew this already.

The main purpose of this post is to allow our readers to participate in making fun of Paulie:

Oh yes. We certainly couldn't pass of this blank canvas.

As in 2010, we are offering a cash prize to the person who can create the funniest slogan for Pauie's banner. As I am not as affluent at the person who offered the prize the last time, I can only offer $50.00, but it is $50.00 you don't currently have so don't be picky.

Now, I am not as witty (or funny) as Nosferatu, but I did create a few examples to help stoke the creativity of our readers:

We provide you, our loyal readers, the following possible templates, but feel free to modify it yourself:

The contest begins immediately. All entries need to be emailed to arc(dot)collective200(at)gmail(dot)com by October 6. We will post those we receive and then you, our readers, will vote on which one you believe is the best of the bunch.

FROMM FOR MAYOR: Because JEWS!